After a couple more days of 100 degree weather, we arrived in the Pacific Northwest. We rode through Seattle to get to Camano Island, where we camped for a night, not only because it’s a nice place, but because it set us up for an easy day the following day to Anacortes where we caught the ferry to Orcas Island in the San Juan Islands. We were traveling too fast again, and wishing we could stop for more than one night, but due to the huge number of RVs and summer tourists, there were no campsites available. We were lucky to find one site for one night at Moran State Park on Orcas. We pledged to work harder at trying to book some of these places a little farther ahead. 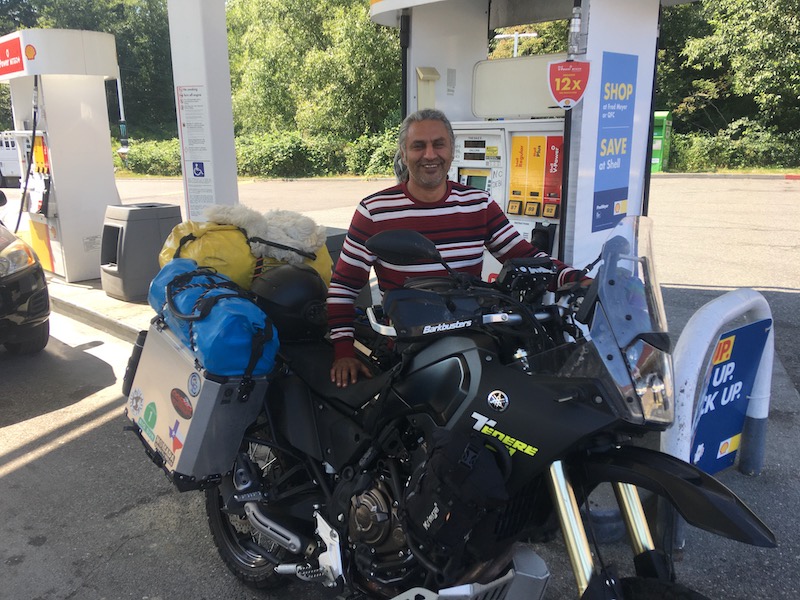 We stopped for fuel on the way to our campsite on Camano Island, and the clerk at the station became very animated when he saw us, asking lots of questions about the bike and where we had come from. Then he pulled out his phone and showed me a photo of his Harley back in Dubai. He was in Washington working on his PhD in Chemical Engineering after having completed his Masters here earlier. He was a great reminder of how incredibly friendly people from that part of the world actually are, versus the stereotypes that Americans are fed. 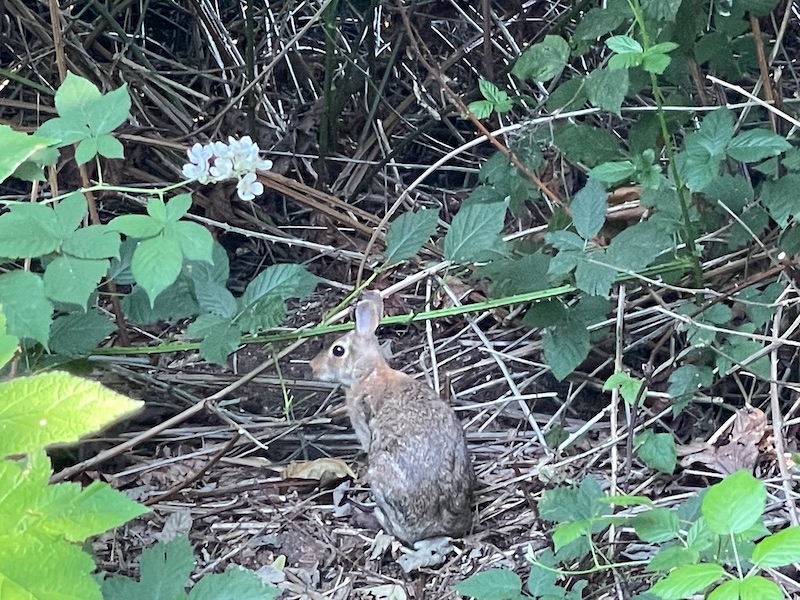 This guy was our companion at our campsite on Camano Island.

Looking out from our campsite. It’s been a lovely 67 degrees most days since Camano and Orcas.

Unlike on the Outer Banks in North Carolina (where motorcycles go to the front of the line at the ferry dock, but board last), motorcycles are sent to the front of the line here and board first. So while we were waiting for the ferry to Orcas, a Harley pulled up, and we spent a good while chatting with Johnny Mudd, an Orcas resident. Johnny is in his mid 70s, looks a bit like Billy F. Gibbons of ZZ Top, and was quite entertaining to talk with. While Johnny mentioned at one point that his family was the same Mudd family from the Harvey Mudd College and the La Brea Tar Pits in California, he gave no hint at just how entertaining he and his twin brother Jimi really are. I’m not going to go into detail here, but if you have time and want to head down a fun rabbit hole, Google “Jimi Mudd” and click on the second article that pops up.

Once on Orcas, we set up camp at Moran State Park and set off to do some touring. Two suggestions from our conversation with Johnny were high on our list: the view from atop Mount Constitution, and clams at Buck Bay. 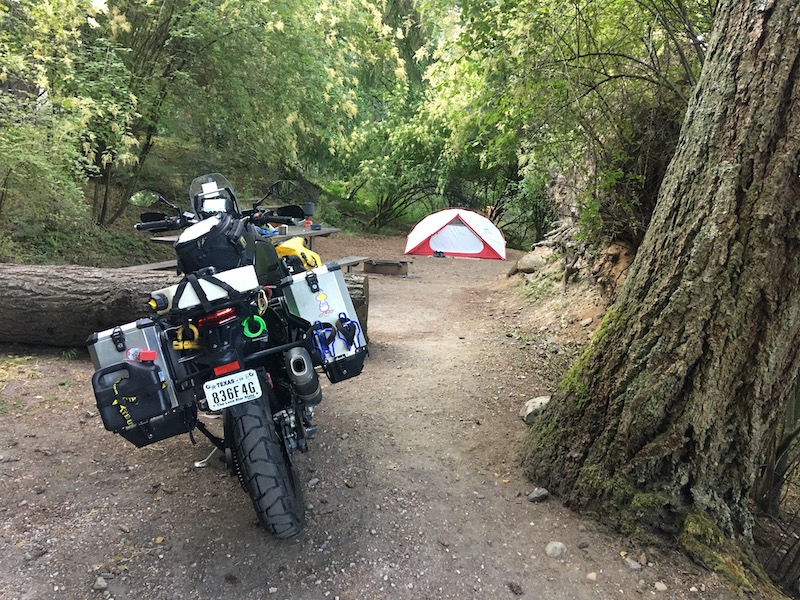 Our camp on Orcas Island.

The view from atop Mount Constitution, with Mt. Baker covered in snow in the background. It’s a great road, and worth every bit of the climb.

I wasn’t aware there was an island named for me out here. 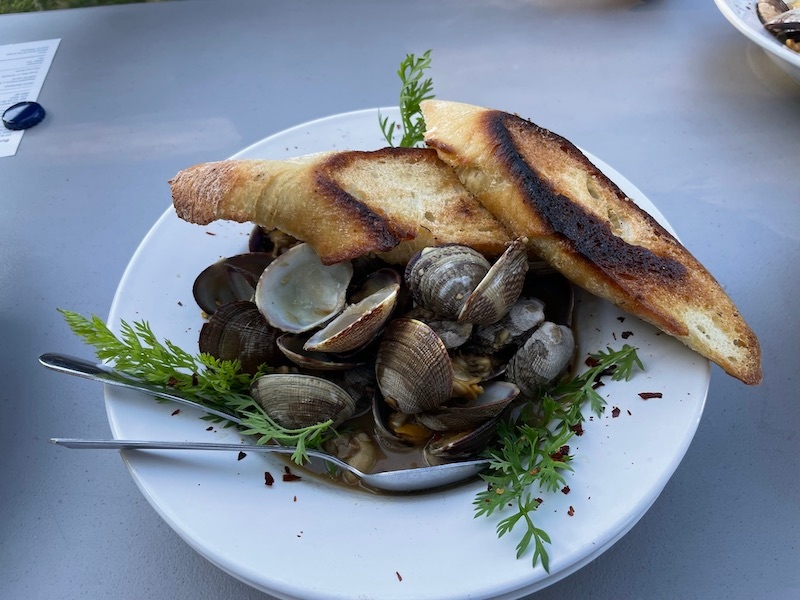 Just a little bit past the turnoff to Mt. Constitution is a little town called Olga, and just past that is Buck Bay. And on the far side of Buck Bay is the Buck Bay Shellfish Farm, which serves some delicious and extremely fresh steamed clams and other local seafood. 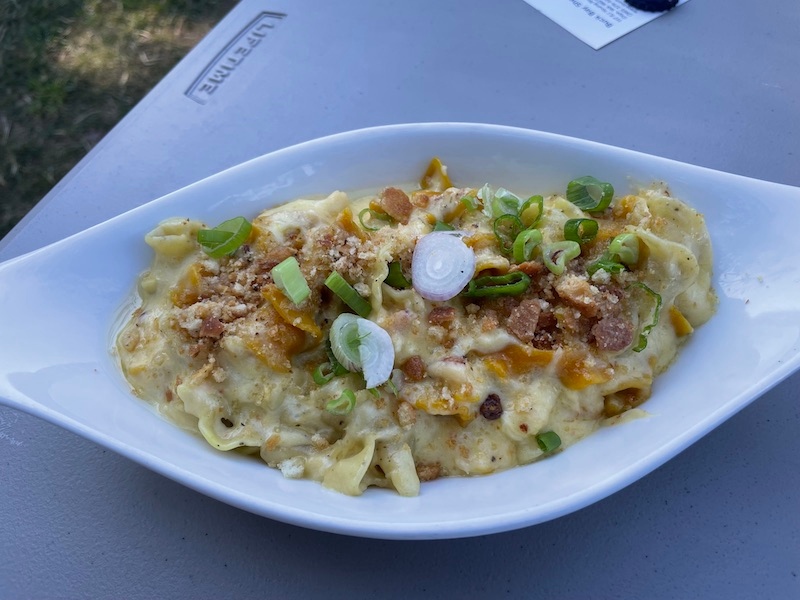 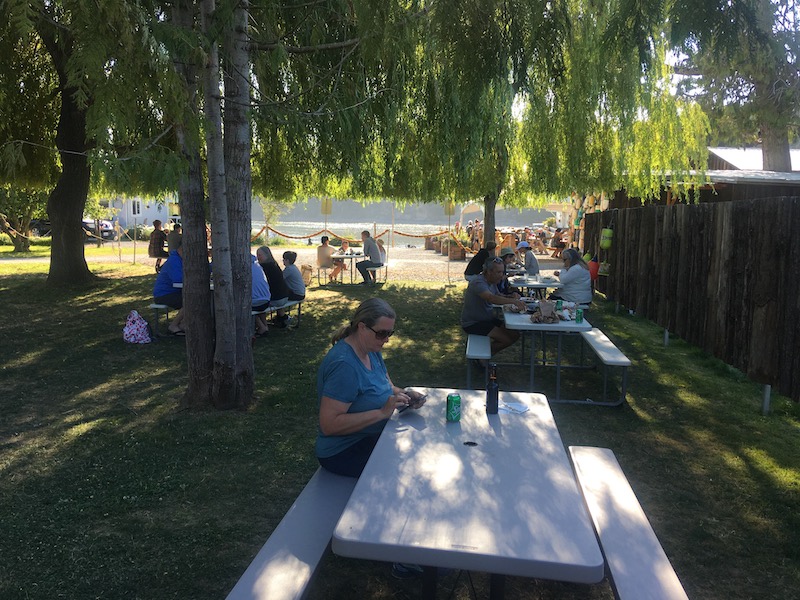 This place is mostly just a bunch of tables under the trees in a farm yard. And so worth it. 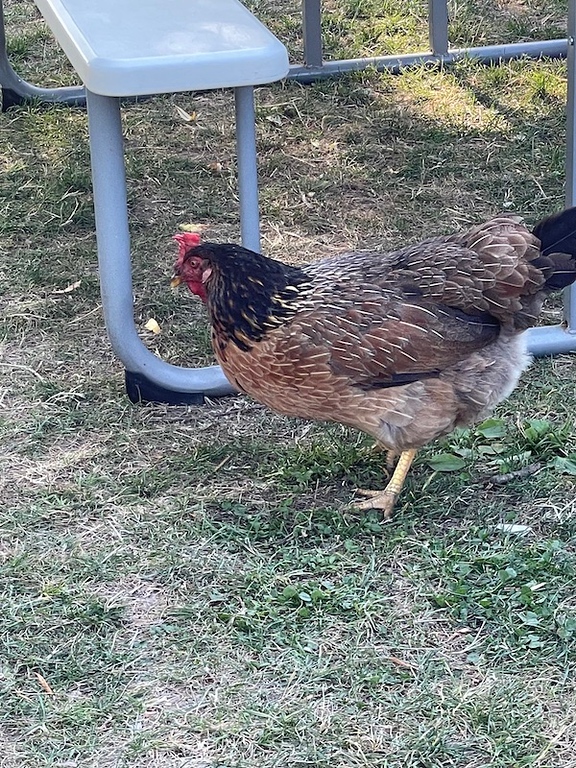 Be prepared to share your dining spot with the farm animals.

Leaving Orcas Island, we headed south from Anacortes and caught the ferry in Coupeville to Port Townsend, where we spent a night with my niece and her husband. David prepared a fantastic dinner for us, and we spent the evening around the table talking about everything from our trip to their recent purchase of a sailboat that will soon be their new home. Once again, we were gone too soon as we had a commitment in Seattle, but we hope to return very soon for at least one more meal. I mean visit. 🙂

In line for the ferry to depart Orcas Island. I can say with full certainty that this is the first time I have ever boarded a ferry with a guy on a Vespa carrying not one but TWO chainsaws, and a guy on a KLR650 carrying a rifle. 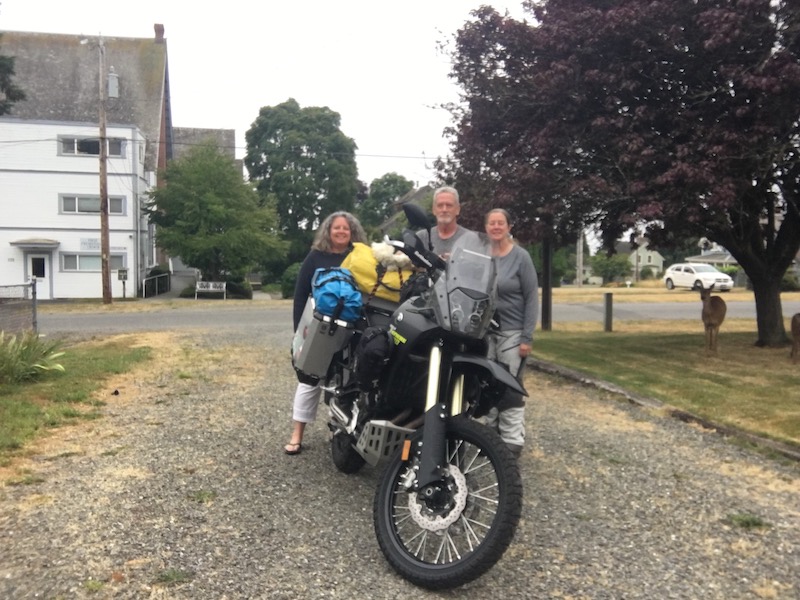 Unfortunately I forgot to take the photo before David had to leave for work/school that morning. Another reason to return!