Often it’s not just a place that leaves lasting memories, but the people associated with the place as well.

I had stumbled on Pu Luong Treehouse online back in late October and contacted the owner via their website as there didn’t seem to be a way to make a reservation directly on their site. Dzung (aka Zoom), the owner, responded immediately and said she would schedule me in for two nights.

I wasn’t sure what to expect, and honestly didn’t expect much, as the place is simply several bamboo houses built on stilts by locals. Zoom calls it “authentic” and that it is. It’s not the Ritz. It’s far from primitive. It’s authentic and extremely charming. And due to the incredible staff and the beauty of Pu Luong Nature Reserve, this place has become my favorite place out of everywhere we’ve been in northern Vietnam. In fact, after 53 countries and counting, it has made it high up on my list of favorite places period.

The route we took to get here from Tuyen Quang took us over a mountain on a well worn and broken up road with grades as steep as 18%. I was having doubts that we were headed in the right direction but the gps kept saying we were getting closer.

Eventually we dropped off the side of the road down a small muddy concrete footpath and emerged onto a small road around a valley of rice paddies. There in the middle sat a small hill with its’ own forest filled with bamboo tree houses.

As we pulled up to the gate we were welcomed by staff and shown where to park the bike. Duy, the manager, greeted us and showed us around, giving us a map of the area and explaining that we were the only guests this night. He literally said, “The place is all yours. Please enjoy.”

And that was just the beginning. 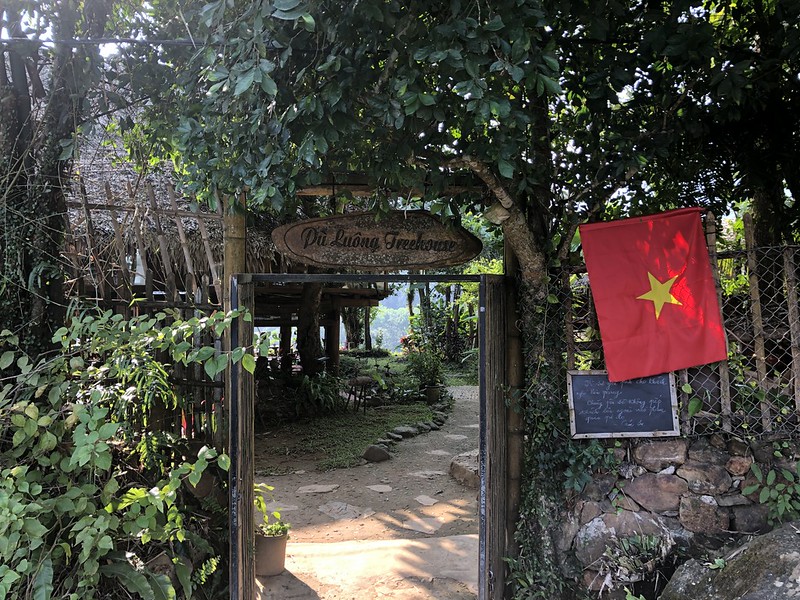 Our room for the first night was one of these treehouses. 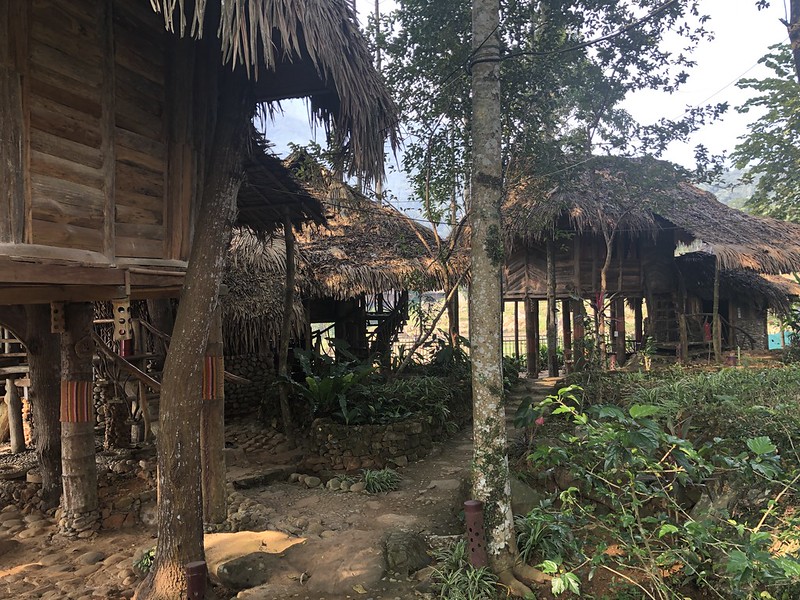 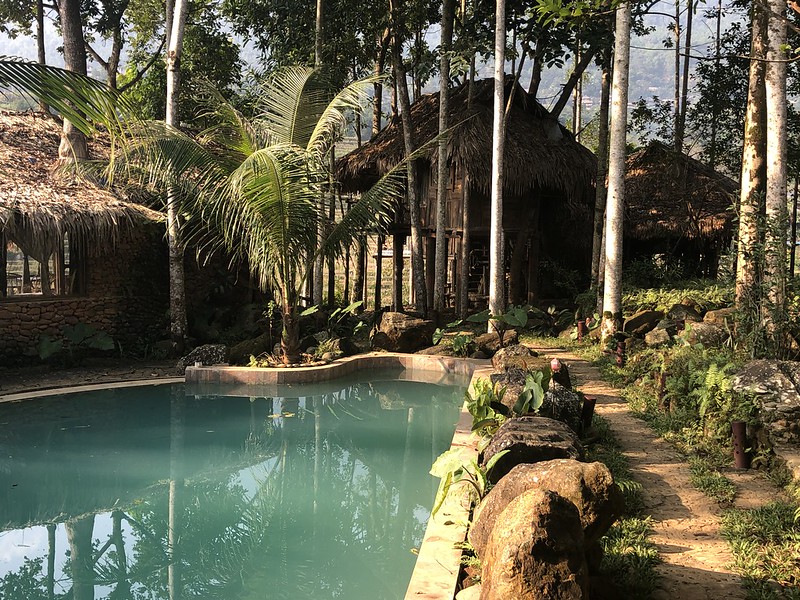 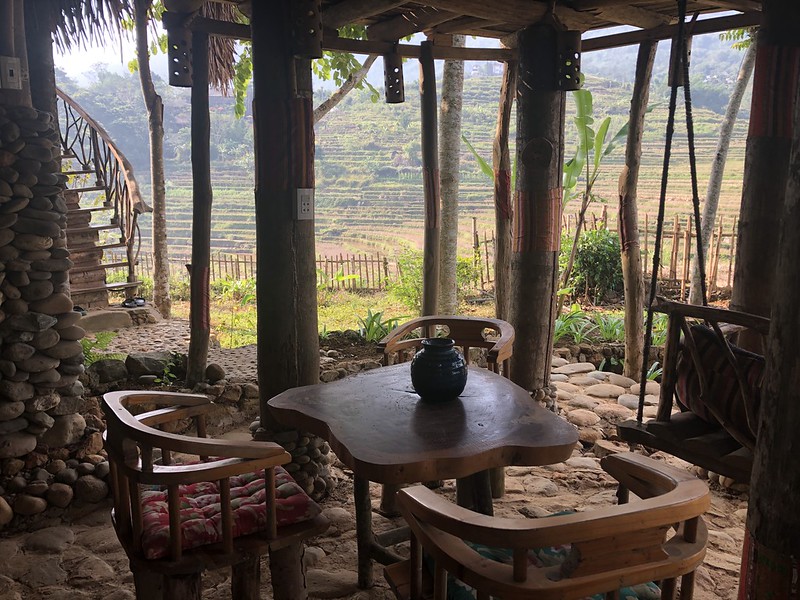 Our private seating area under our treehouse.

We spent the first night in a treehouse or house on stilts. The view out across the paddies to the hills is beautiful. I walked back down to the common area to ask Duy if we could get two extra pillows. The answer wasn’t simply “Yes”. It was “Two? Four? Or six?” 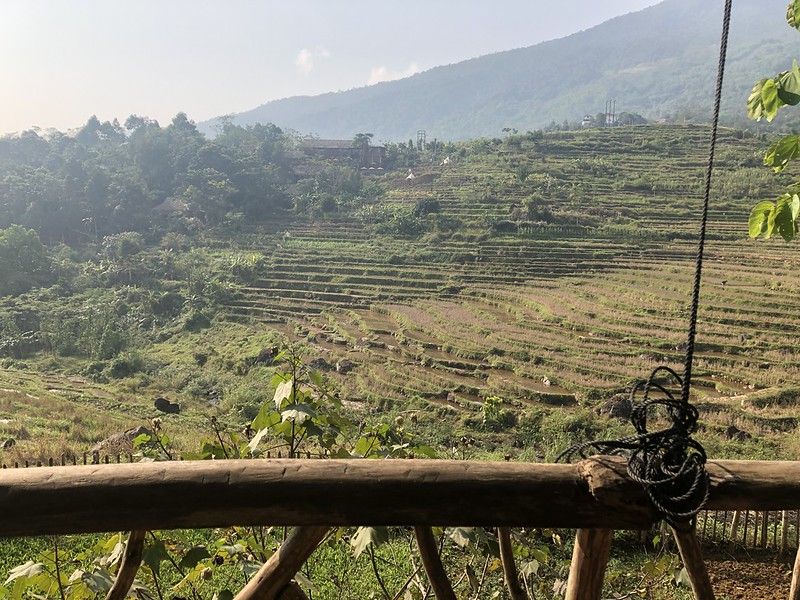 The view from our balcony the afternoon we arrived.

And the same view the next morning. Socked in and dead silent. Total relaxation.

A set menu dinner is served in a nice dining area, and it is by far the finest food we have experienced in Vietnam and maybe beyond. Each night is a different menu, using local ingredients and authentic local dishes. Breakfast consistes of your choice of an omelet, fried eggs, or pancakes, with fresh fruit and coffee or tea. 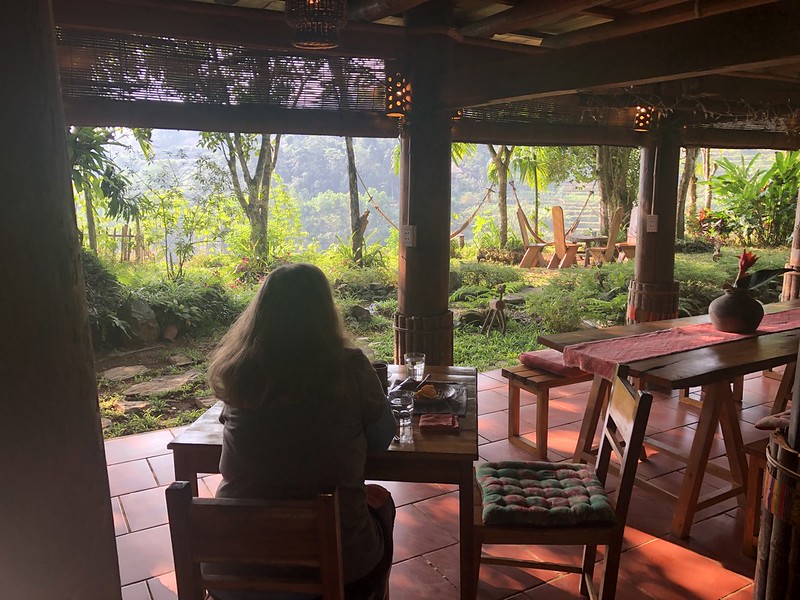 Meals were served in this beautiful dining area, again with peaceful beautiful views. 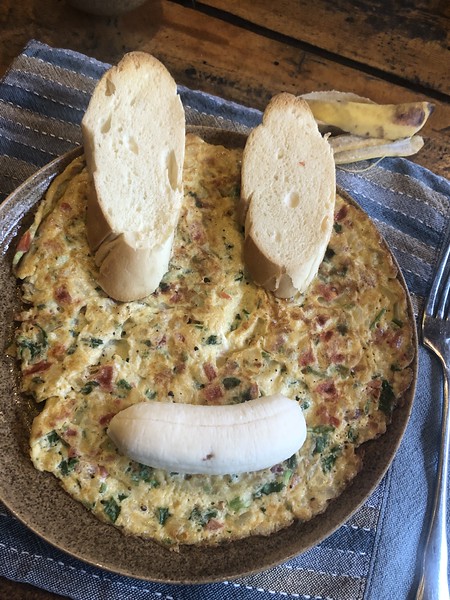 Not sure why but my breakfast omelette reminded me of Mr. Krabs from SpongeBob. 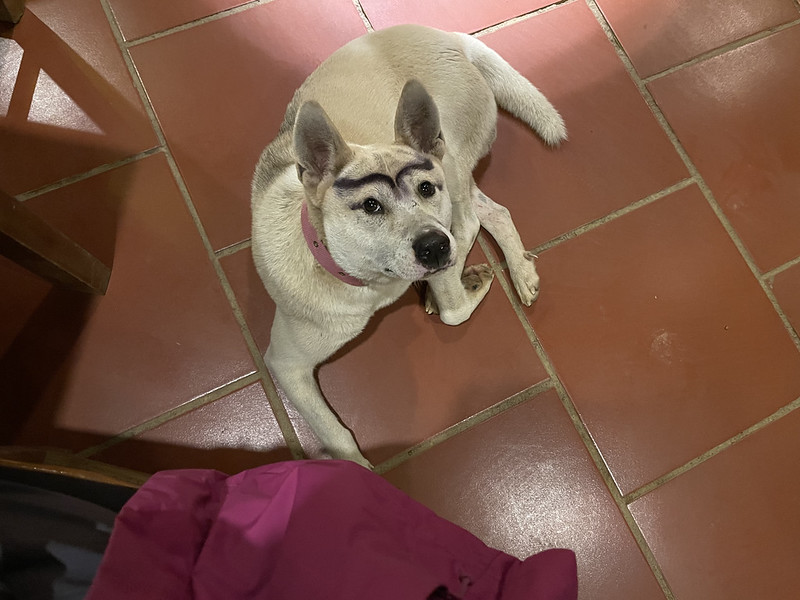 Another super cool member of the staff at the Treehouse. I think Duy said his name was Tso, but he definitely referred to him as the Public Relations Manager and Head of Quality Assurance.

The next morning Duy greeted us and asked how we enjoyed the treehouse. Then he asked if we’d like to change rooms. “Look them over and stay anywhere you like. A different room each night if you like!”

This place is incredible.

We took Duy up on his offer, and moved to The Roundhouse for the rest of our stay.

We had originally only planned to stay for two nights, then continue south toward Khe Sanh and on to Da Nang and Hue. But a check of the weather forecast showed a 70 to 75 percent chance of rain for the next ten days further south. While we normally don’t mind riding in the rain, several factors were telling us to reconsider. First and foremost was this place: comfortable, beautiful, incredible food. It would be hard to beat. Then there were the roads. They’re good but not great, and the combination of the slick red mud from the constant rain along with the trucks and other obstacles (dogs, chickens, bad drivers, etc) again made us want to just stay here and chill.

So we talked it over and reached a new game plan: We would spend five nights here, then move to another location near Ninh Binh for several nights before returning to Hanoi. We wouldn’t be going any further south this time but we’re okay with that.

When I asked Duy if we could stay another several nights, his response was as I had come to expect: “Stay as long as you’d like. We had one guest come for a week and stay for a month.”

I think I could do that here.

We’ve now been here four days. A few other guests have come and gone but it’s mostly just been us. Yesterday I asked Duy if there was a place to get my hair cut in the nearby village. As usual, he not only showed me where but told me to take his scooter to go into town. As we also had to make a run to the ATM (much further away), we took our bike instead.

By the way, we each had our hair washed and blow dried, and I had a haicut and shave. The total price for all of this: $2.50.

All of this luxury lifestyle comes at a price of course. While other places we’ve stayed have mostly been $10 to $18 a night, and as much as $26 in Hanoi, here we are paying $46 a night for room and breakfast (about the same price as it cost to rent a patch of grass to pitch the tent in Europe), and another $8 each for a fabulous dinner.

You don’t have to be rich to travel like we do. But you can live like a king for relatively little here in Vietnam. All it takes is the willingness to get off the Gringo Trail and slow down for a while.

And Pu Luong Treehouse is my new favorite place to do that.

Tso, Duy, and Diana. I wasn’t ready to leave, but it was time to move on.