As we left Zadar, we headed east and began to climb into the mountains. The speed limit on the highway here is 130kph, or about 81mph, and that’s how fast we were going when the first giant gust hit us from the left side. Just prior to this, there were lighted signs overhead warning of windy conditions and advising 60kph, or 37mph. But hey, how bad could it be? Cars were going 80mph. RVs were going a bit slower.

And then it hit. On a large bridge with total exposure on both sides. The gust hit us so hard that it felt like the front tire was lifted off the ground and pushed sideways. I leaned the bike into the wind at what felt like an extreme angle considering we were just trying to go straight. For a brief second, I was sure the front end had washed out and we were going down. But although the bike fought with us and the wind, it stayed on its’ wheels and we managed to avoid being driven into the guardrail as we blew across the lane.

I immediately slowed down to about 50mph, but even at that speed, the direct crosswind, which had to be more than 60mph, was a huge struggle. My arms, shoulders, and back fought with all I had to keep the bike leaned into the wind and in the lane. Eventually we settled into a 25mph (40kph) speed behind a motorhome that was doing the same, with our flashers on, and we fought the wind for what seemed like an eternity, although it was actually only about thirty minutes before we emerged from a tunnel on the east side of the mountains and the wind slowed considerably. There were a few tunnels during the crosswinds that allowed us a brief reprieve, but eventually there was one that was about two miles long, and this allowed me to release my grip and shake my arms out, regaining feeling from the death grip that I hadn’t realized had become so strong.

We continued north to Smiljan, the small village where Nikola Tesla was born. His childhood home has been turned into a museum of sorts, and a scaled-down reproduction of his 1899 laboratory in Colorado Springs has been built here, complete with a large working Tesla coil. We were handed flourescent light bulbs to hold while the docent fired up the Tesla coil, illuminating the bulbs in our hands wirelessly. 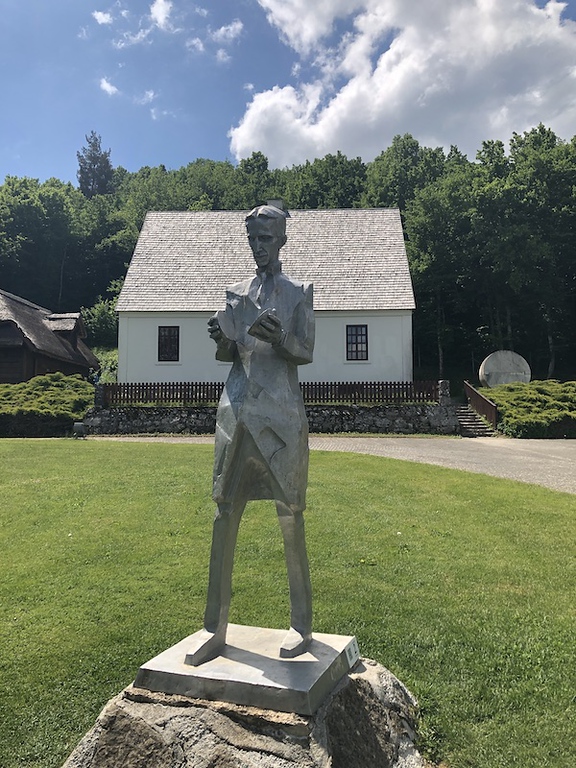 This statue of Nikola Tesla stands outside his childhood home at the Tesla Memorial Museum in Smiljan.

A Tesla coil sits in the corner of a scale reproduction of Tesla’s Experimental Station. The original was in Colorado Springs in 1899-1900, but when a local caretaker won a judgement for $928 against Tesla for unpaid services, it was sold at auction, and torn down for scrap. 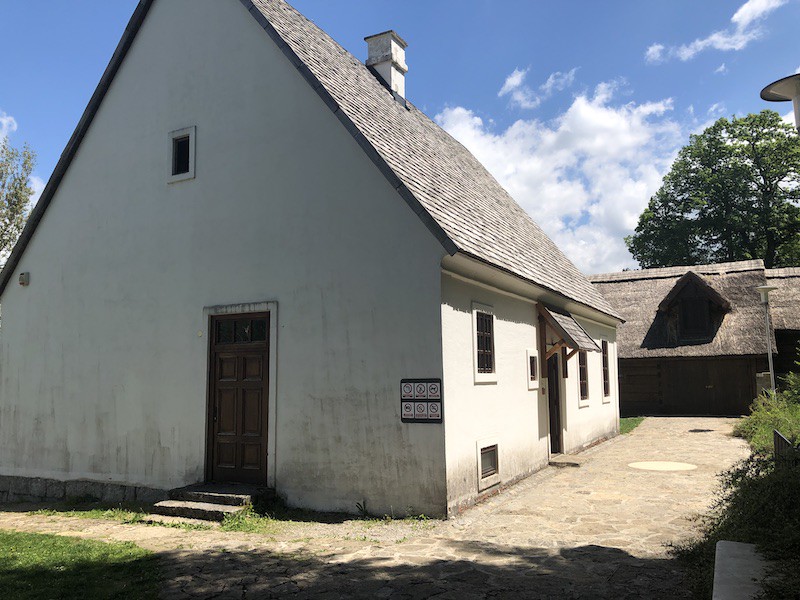 Tesla’s childhood home, now a museum with a detailed timeline of his life and accomplishments.

The Tesla Memorial was interesting, but only whet my appetite for more Tesla background and history. While some of the exhibits have English translations, much of it is in Croatian, without English subtitles, so while we got the gist of it, I now want to learn more about his early childhood, experiments, patents (he had over 700 of them), and his time in America with Thomas Edison, George Westinghouse and more. In his last 30 or so years in America, he lived in hotels, and he justified it by saying that settling into one place would stifle his scientific creativity (never mind that he was bankrupt and had several judgements against him, including some from unpaid hotel bills. He was a brilliant scientist, but apparently a terrible businessman.) He also said a lot of other things that I might consider today the ravings of a madman, but there’s no denying his brilliance.

Back on the bike, we headed northwest to the Istrian Peninsula, and then south again to Pula, where we met up with Dalibor and Suzanne, our hosts for the next two evenings. Dalibor is an electrician, and after spending several years working at sea for a large cruise ship company, he now does consulting from home in Pula, while restoring and renting out apartments in a small complex very near the center of town.

Our apartment is on the left, just across from the Sex Shop, which is right next to the Catholic Church. The large tree on the left side of the street is where the amphitheater is located, about a block or less from our place.

The interior courtyard of our apartment. That’s our door straight ahead. 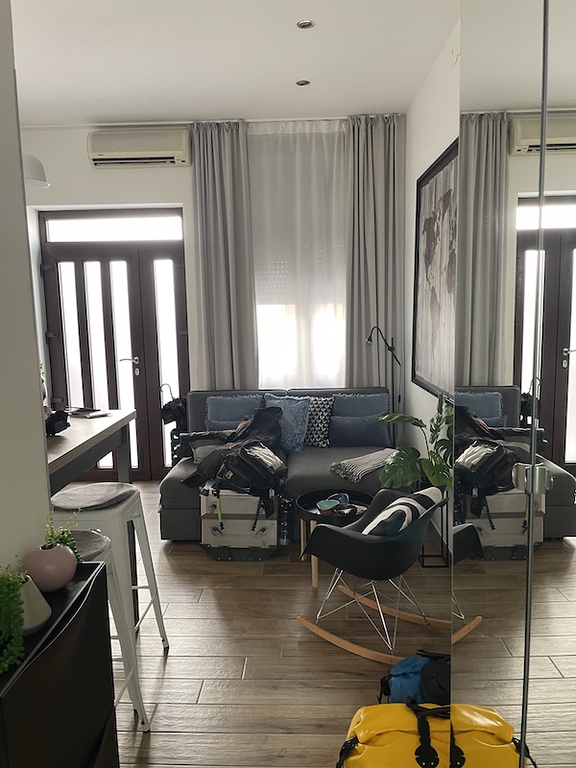 The living room, with all of our gear scattered about. This is the lap of luxury for us, at $68 a night. Bear in mind that most campgrounds in Europe cost $35 to $45 just to pitch our tent, so it’s nice to spend a little more once in a while and get a bed, a couch, a kitchen, and even air conditioning.

I have to admit, I was a bit nervous about staying here, only because there is no on-site parking, and one of my priorities — if not my highest priority — when deciding where to stay is the security of the motorcycle. In this particular instance, it was necessary to park about two blocks away, in an open parking lot that had an arm blocking the entrance and exit. As I parked the bike there after unloading our stuff into the apartment, I couldn’t help but notice that besides one car that looked like it had been parked there for quite a while, our motorcycle was the only other vehicle in the lot. Dalibor assured me that crime was not a problem in Pula, and I accepted his reassurances. Although I still added my usual routine of cable lock through the rear wheel, disc lock on the front wheel, steering locked, and bike cover in place. Over the years, I’ve found the bike cover to be the most effective anti-theft item, as once the cover is on the bike, it becomes nearly invisible, and no longer attracts attention. Whereas without the cover, just the Texas license plate is enough to draw a crowd. (However, we were beat out today by a car parked on the street near our apartment…a blue Cadillac with Nevada license plates. I’m glad I didn’t have to pay to ship that over here!)

The day was looking to be around 75F and 40% humidity; much cooler and drier than the last several days further south. Diana put together several points of interest and we set off on a walking tour of Pula. First off, the Amphitheater:

The Pula Amphitheater, built between 27 BC and AD 68, is the only remaining Roman amphitheater to have all four side towers entirely preserved. 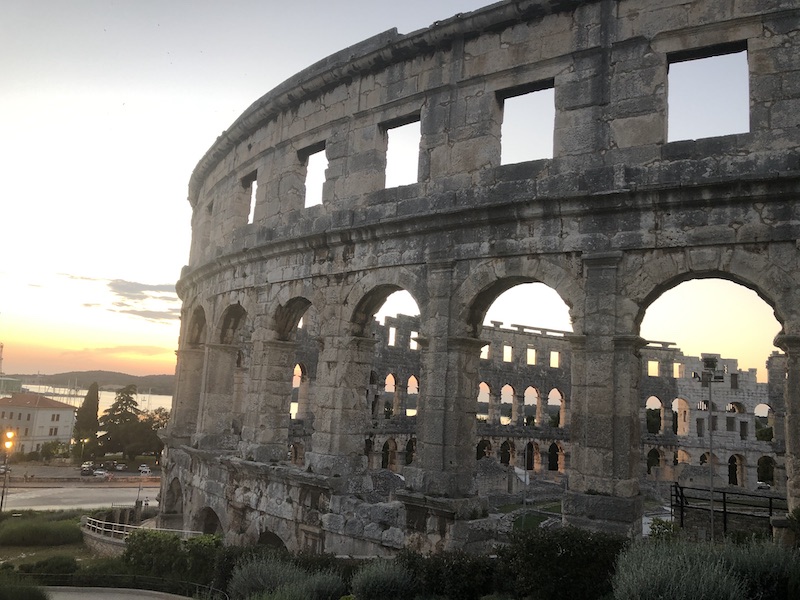 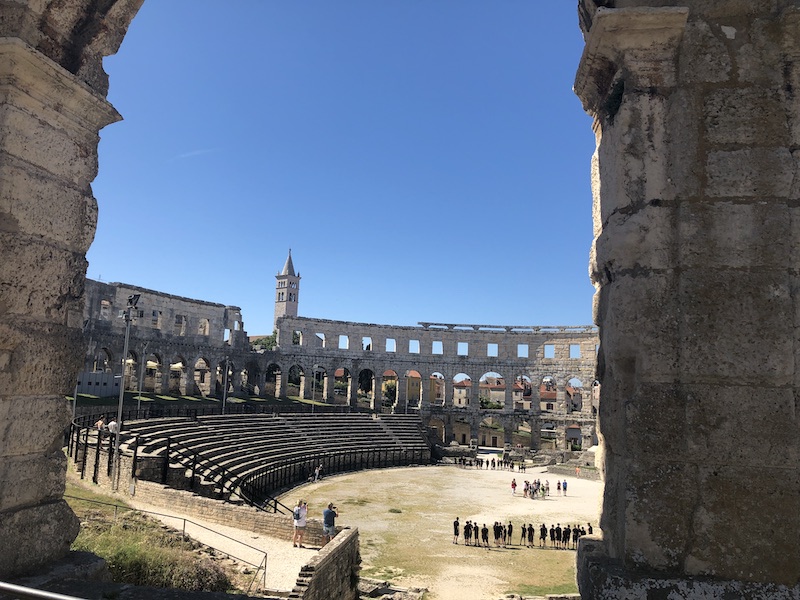 Incredibly, this two thousand year old structure is not off-limits. There were kids playing on the floor today while tourists roamed around the inside. There are no “stay off” signs, no “no trespassing”, nothing. It’s available for public use. Several concerts and plays are held here each summer. 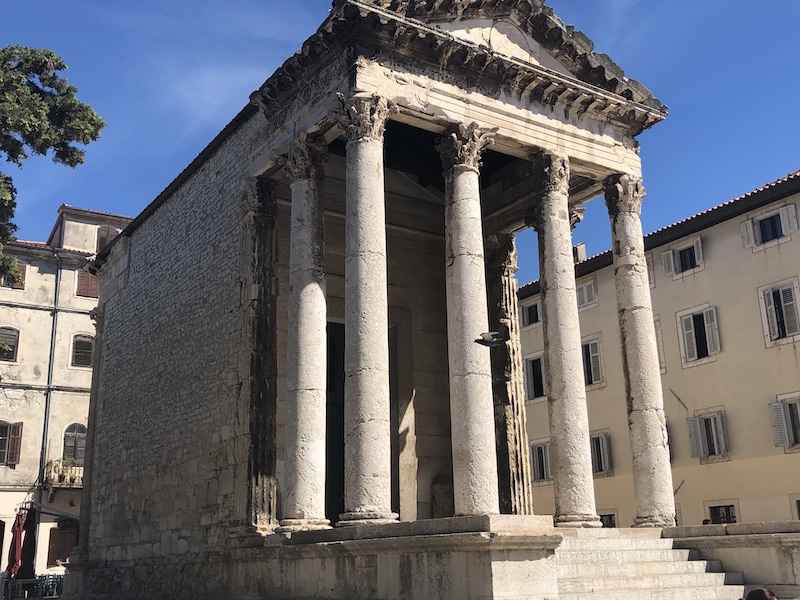 The Arch of the Sergii, once a Roman gateway to the city. Built in 29 BC

The Twin Gates, one of ten entrances to the old city. These were built in the late 2nd Century AD. 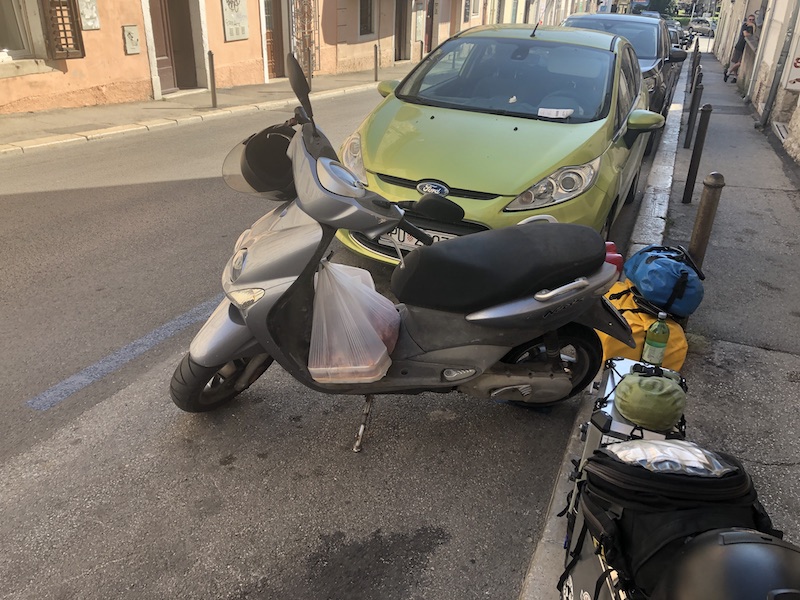 When we arrived at our apartment to check in, and began off-loading our stuff from the bike, Diana noticed this scooter parked next to us. No idea how long it had been there, but it was there when we arrived. Note the plastic bags on the floorboard. 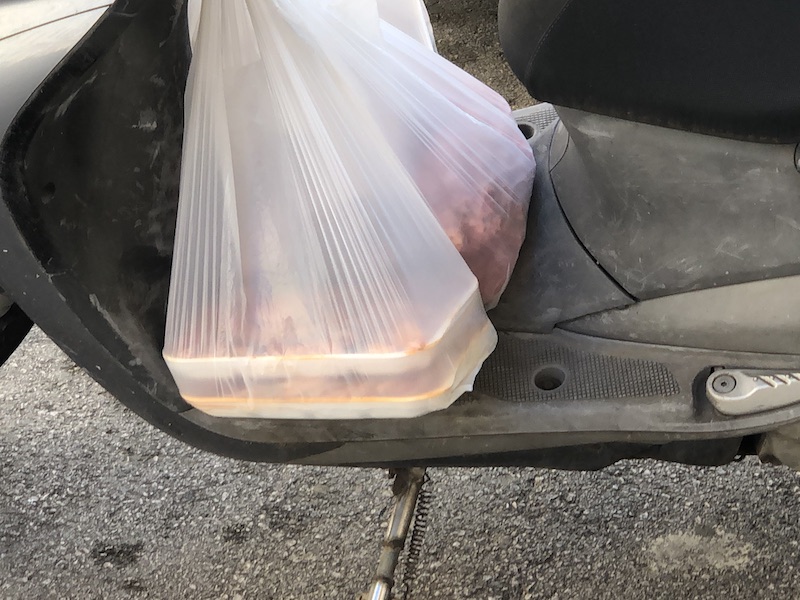 Yes, that is meat. Lots of meat. I would say fresh meat, but I have no idea how long it had been sitting on the scooter. Nor do I know how long it continued to sit there. But that’s a lot of meat.

It just feels wrong to go on a Dolphin Watching Tour that includes a Fish Dinner. 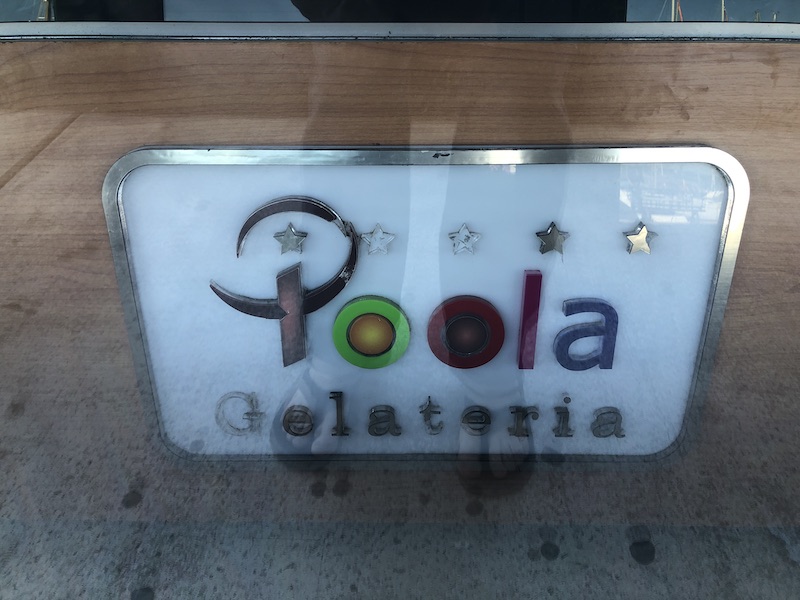 I saw this Gelato Shop sign, and thought, “Hmmm…that would be the perfect name for a local place that comes by and scoops your dog’s poop in your yard.” I’ve seen those services in the States, but it just has a better ring here in Pula. Or Poo-la.

And then I saw this image on t-shirts and tote bags in several shops, and wondered why Disney fans and others who are unhappy with the governor of Florida hadn’t adopted it. I have no idea what the original intent was, other than just a fun random act of Mickey.

Tomorrow we leave Croatia for our crazy rush across Europe to the other side. We’re both a bit bummed that we’ve planned this part of the trip too much, which doesn’t allow time for things that might suddenly pop up, like the fact that three other travelers from our past are all within an extra day’s ride, and we don’t have an extra day to go see them. Graeme and Katrina, from Australia, are in Northern Italy right now, having just recently arrived back to their motorcycle, which had been stored in Bulgaria during the Covid lockdowns. We met them originally while waiting for the ferry from Belfast, Ireland to Isle of Man in 2018. Jake, who stayed at our place in Texas just a little more than a month ago, is now in Italy as well. We’re still hoping to possibly cross paths as Diana and I pass through on our way to Normandy.

We’ve made a vow to not structure the trip so tightly that we can’t make alternate plans. This, along with having a definitive end date due to home maintenance and having cats at home that we’d like to see, is a big difference between the way this ride feels and the first trip in 2015-16. But we’re adjusting slowly. And…even though we have an “end date” in mind, we’ve already started making commitments to another exciting leg that could very likely start within days after this trip “ends”.

2 thoughts on “Pula, via a Breezy and Shocking Experience”