This has to be my highlight of Bolivia. It’s an odd little town on the edge of the world’s largest salar (salt flat: over 4,000 square miles), and as I said earlier, the initial appearance as you descend into the town from the mountains (or from an airplane I would imagine), is that it looks a bit like the temporary city of Burning Man: a small community surrounded by vast nothingness.

Aside from tourism, there isn’t a lot going on in Uyuni. But the town has definitely capitalized on the tourism. For such a small place, it is amazing how many US, South American, Asian and European tourists are present. The Salar attracts the tourists, but there is a lot going on here as well. Just ten days earlier, the Dakar race came through here. I wish I had been present for that, but timing just didn’t work — this year. 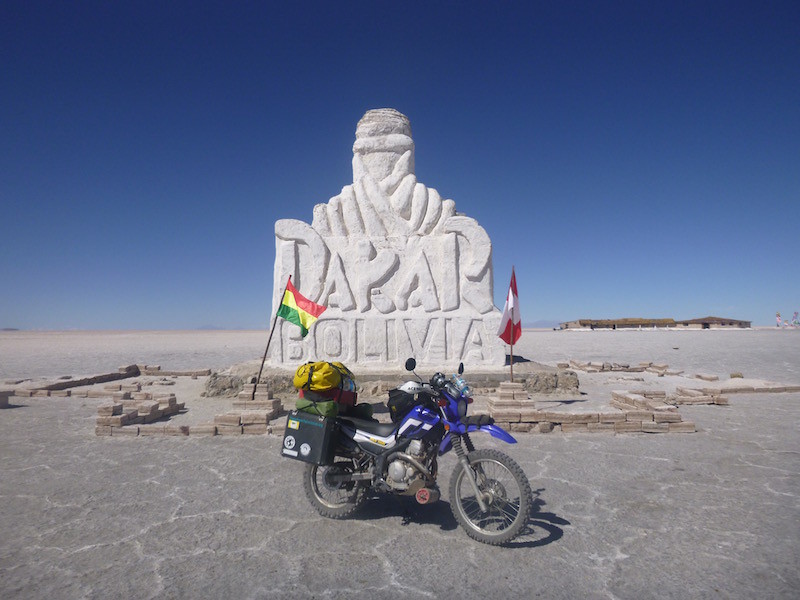 The Salar is definitely huge. It’s amazing to ride across something and see nothing at the horizon but more vast salt flat. Forever, it seems. 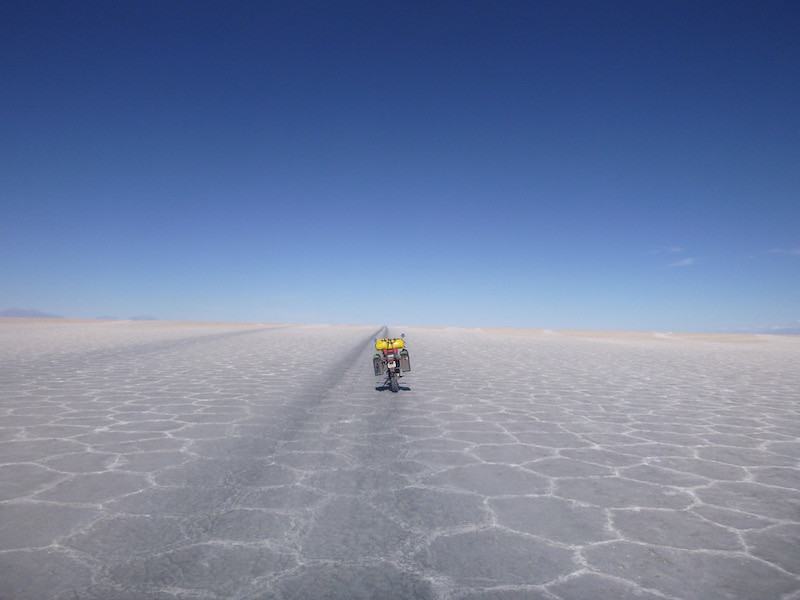 The Road Goes On Forever…there are definitive roads across the Salar. Besides the tourist jeeps, I saw local buses transporting people across this way as well. 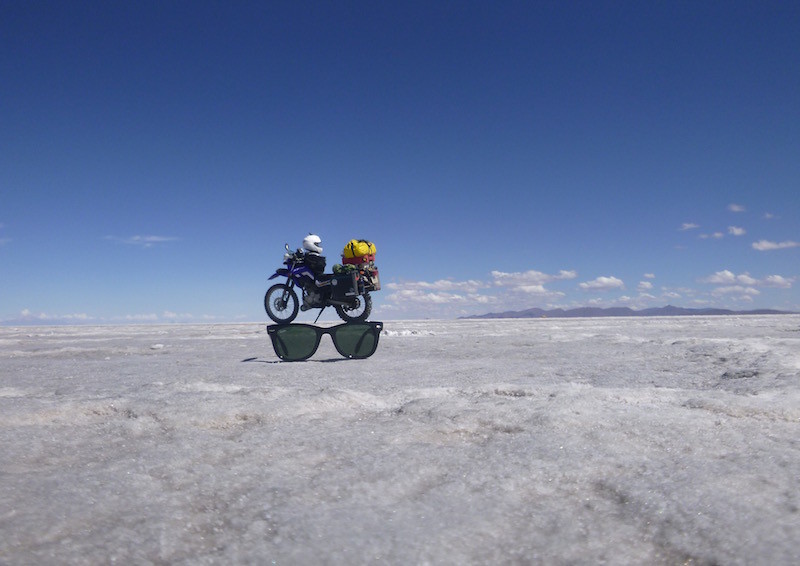 In tribute to my late former father-in-law, Lloyd. This would definitely have been his kind of place. I can see him standing out here, looking around, saying, “Golly. Big place.”

On the edge of the Salar is the Palacio del Sal, the world’s first salt hotel. Much of it is made from salt. 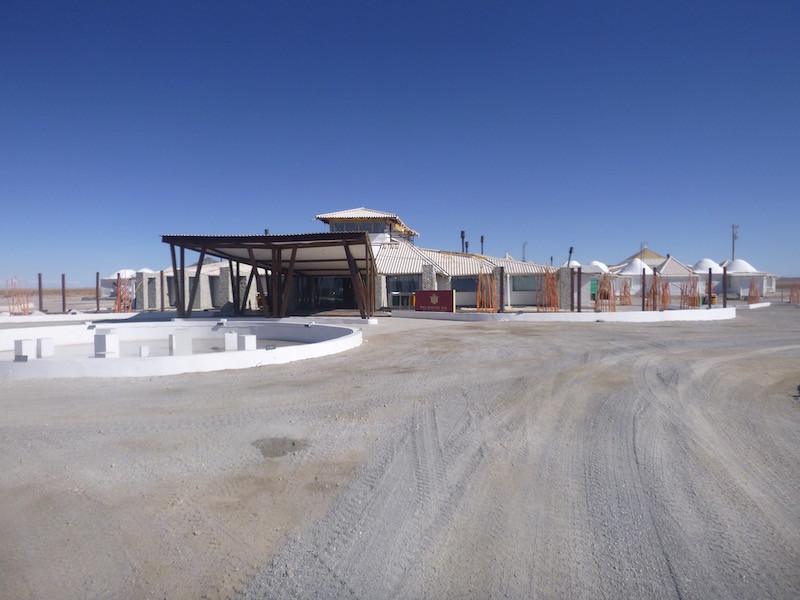 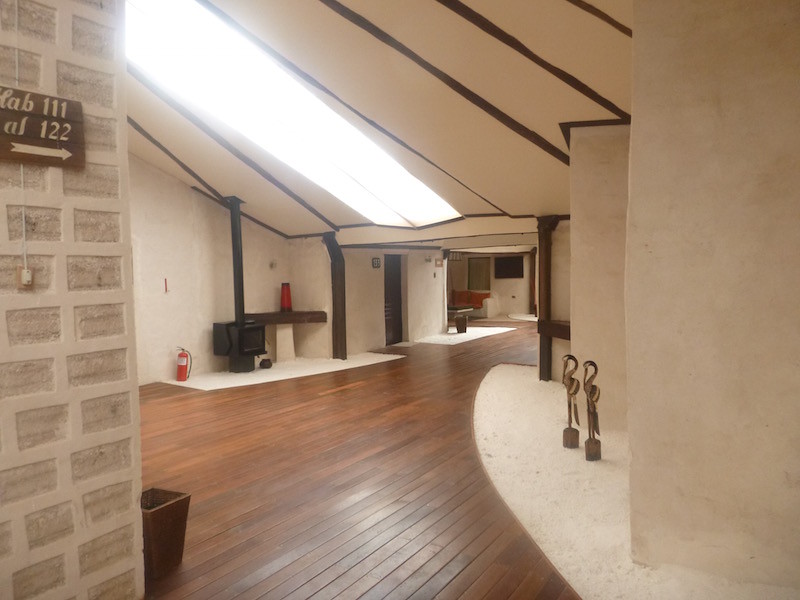 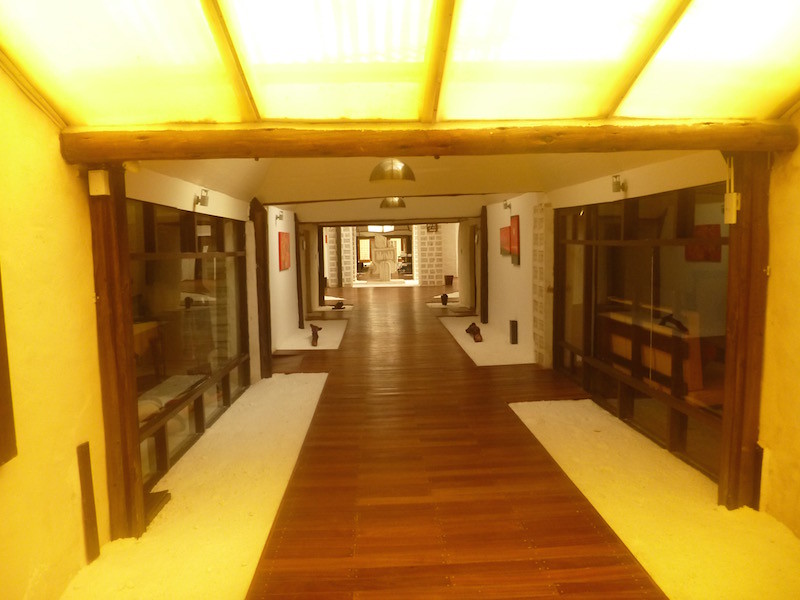 Probably a difficult place to stay if you’re on a low sodium diet.

The other big draw in Uyuni is the train graveyard. Personally, I found it a bit ironic. In the late 1800’s, British engineers, invited by British-sponsored Antofogasta and Bolivia Railway Companies, were invited to build a railway to transport minerals from here. The local indigenous people felt it was an intrusion into their lives, and constantly sabotaged it. In the 1940s the mining industry collapsed and the trains were abandoned. Pieces of the railway and trains can be seen scattered throughout the streets of Uyuni as memorials and pieces of art. So in the end, the thing that the local people despised and wanted to rid their lives of, provides a good part of their livelihood in tourism, and they celebrate it. Still, the train cemetery is pretty cool. 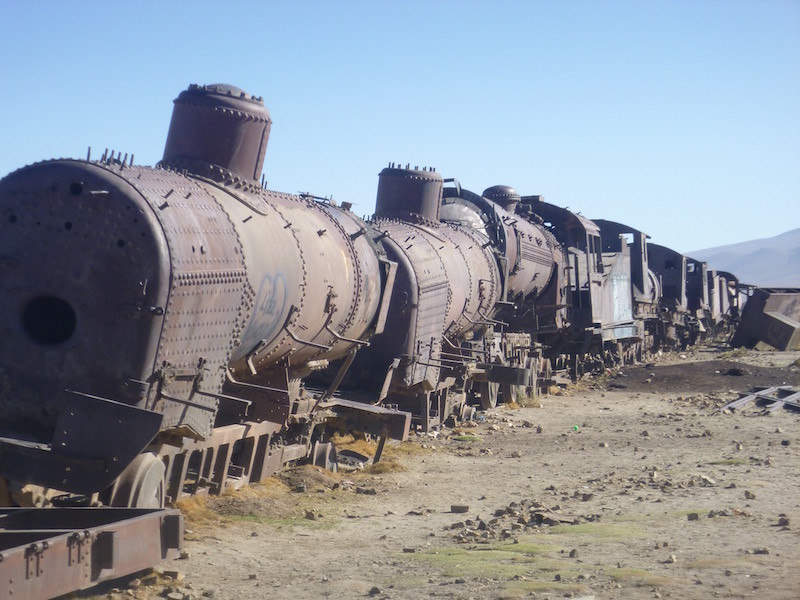 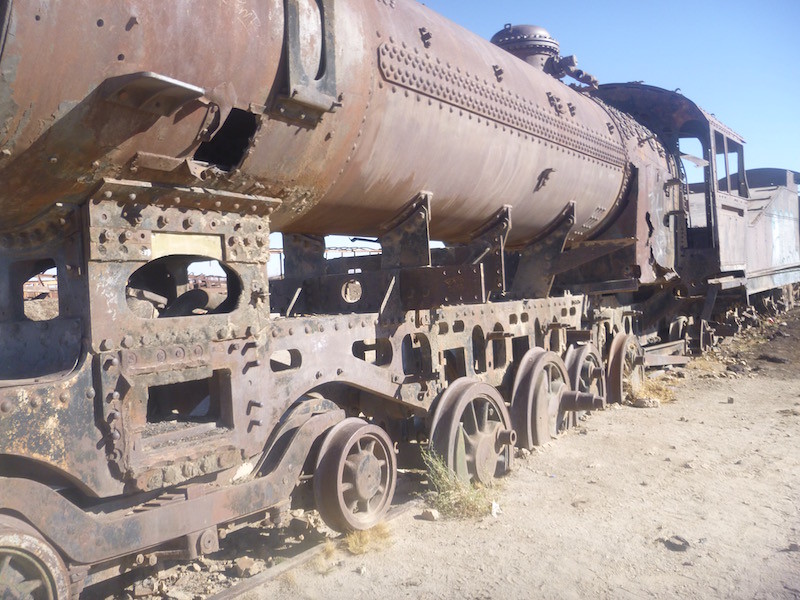 Leaving Uyuni, I topped off my fuel (took two tries to get someone to sell me gas), as the next leg was 275 miles across high desert dirt roads which (allegedly) had no fuel purchase options in between. The first ninety miles from Uyuni to Alota is a fairly well maintained dirt road used by buses and 18-wheelers (it’s the main highway), and it was common to have them pass me going the other way at 60 to 70 mph on the dirt.

In Alota, I rode through the very small village until I found a guy who looked like he might be able to help me. I rode up to him and asked, “Donde puedo comprar gasolina?” (Where can I buy gasoline?). He just looked at me and smiled, pointed to his chest and said, “Yo”. Amazing. In a place that doesn’t sell gas, I find the one guy in town that will sell me five liters from a plastic Jerry can. Now I was assured I could go the distance.

The next 150 miles or so are definitely not highway. From Alota to the border with Chile, through the Eduardo Avaroa National Reserve, the road is mostly sand, rocks, and gravel. This, I found out later, is apparently known as the “Laguna Route” as it passes several high elevation lakes. Definitely no buses. No trucks. An occasional four wheel drive SUV. 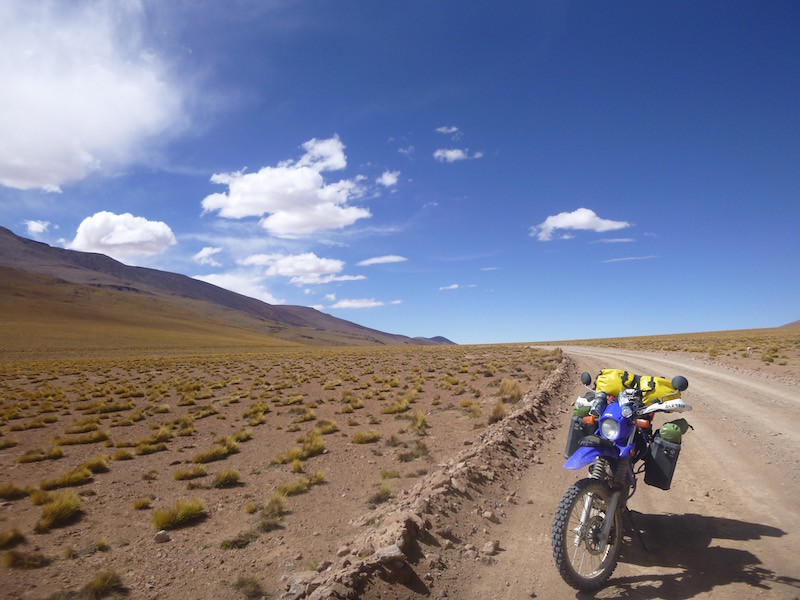 Behind me, blue skies… 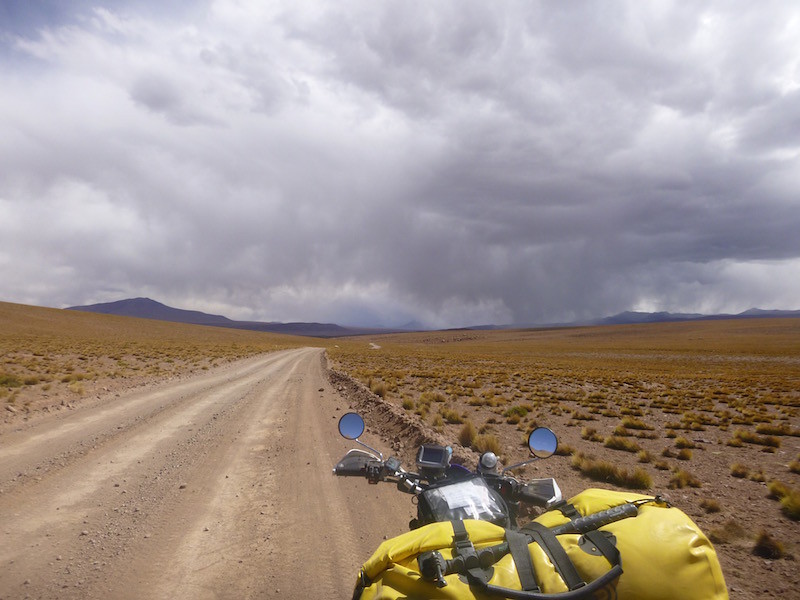 While ahead looks more ominous. In hindsight, I should have paid more attention to the omens.

This is one of the most desolate roads I have ever ridden. In well over 100 miles, I rarely saw another vehicle or person. Lots of Llamas though. 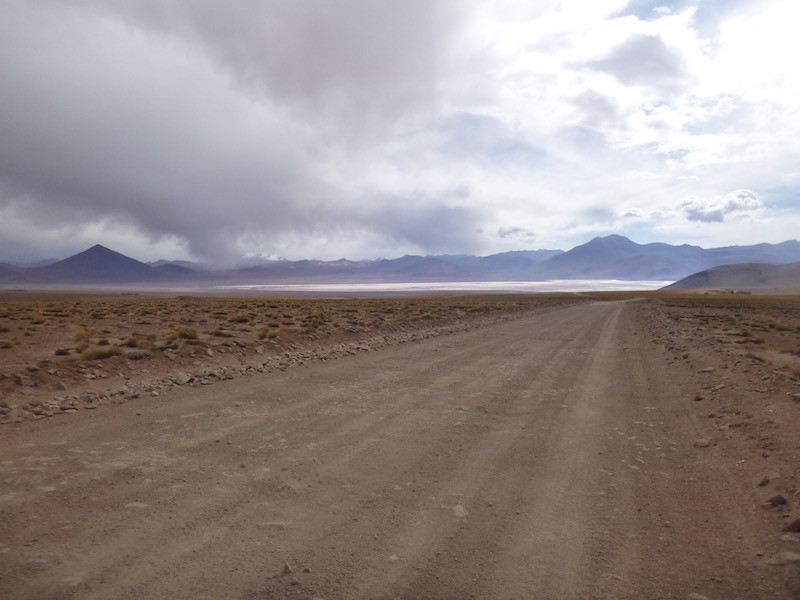 Coming into Laguna Colorada late in the day. 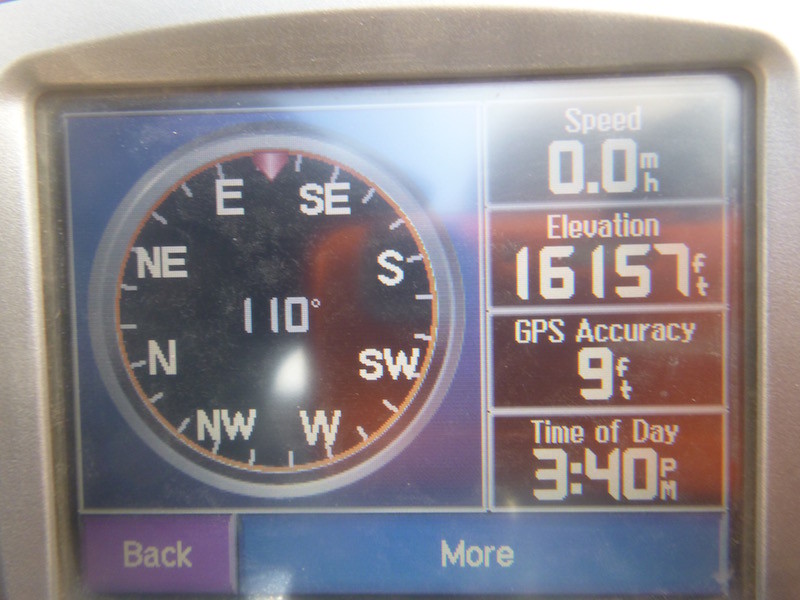 The definition of stark beauty.

You definitely have to keep your attention on the road here. As soon as you think you are on a hard surface and can speed up, you suddenly hit a one- to two-foot-deep section of “fesh fesh” (talcum powder-like dust) or gravel.

And that’s what happened next.