Having arrived in Seattle, we settled in at our next house-sit, a beautiful three level Craftsman home built in the 1920s and restored in the 2000s. We had two super cool cats as roommates for the weekend.

As we began to unload the bike into the house, two neighbors walked up. They introduced themselves as Peter and Jack, and said they had just recently gotten into adventure touring , he on a Kawasaki KLR650 and she on a Yamaha XT250. I laughed and mentioned that my first round-the-world trip had been on the same model as her new bike. We talked for a while about bikes, gear, travel, etc, and I walked two doors down to their driveway to look at their bikes.

As we talked about her XT, I could see the light of recognition on her face. Suddenly she said, “I know you! I’ve read your blog, looking at modifications for my XT.” It was funny to have someone reading my blog, and then for us to randomly show up on their street. 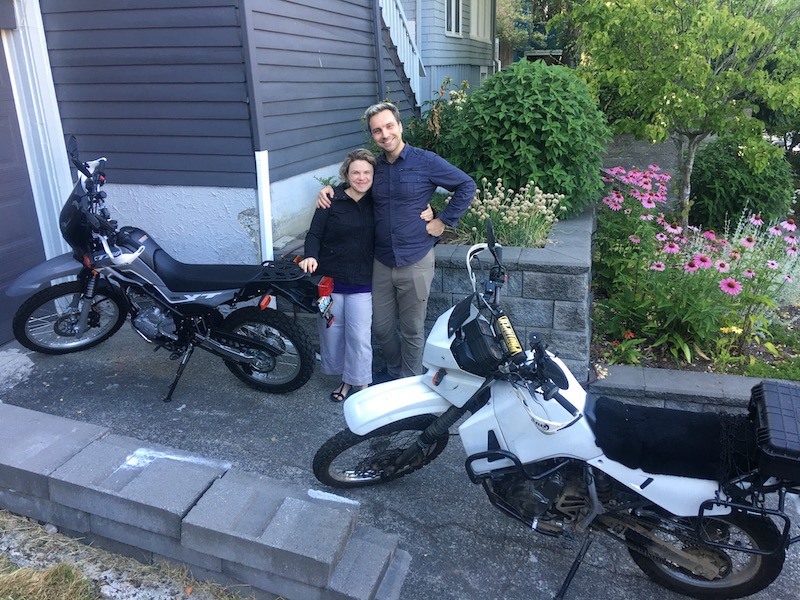 Jack & Peter. Great people. I hope I can help them to enjoy adventure touring.

Peter had reminded me that the US headquarters of Touratech is not only in Seattle, but literally a mile and a half from where we are staying, so we decided to drop by on Friday. We have a couple of their accessories on our 700: a one gallon fuel can and our locking GPS mount. While there I purchased a map of the Washington Backcountry Discovery Route that runs from Oregon to the Canadian border. We may or may not do part of this route, depending on timing and weather. 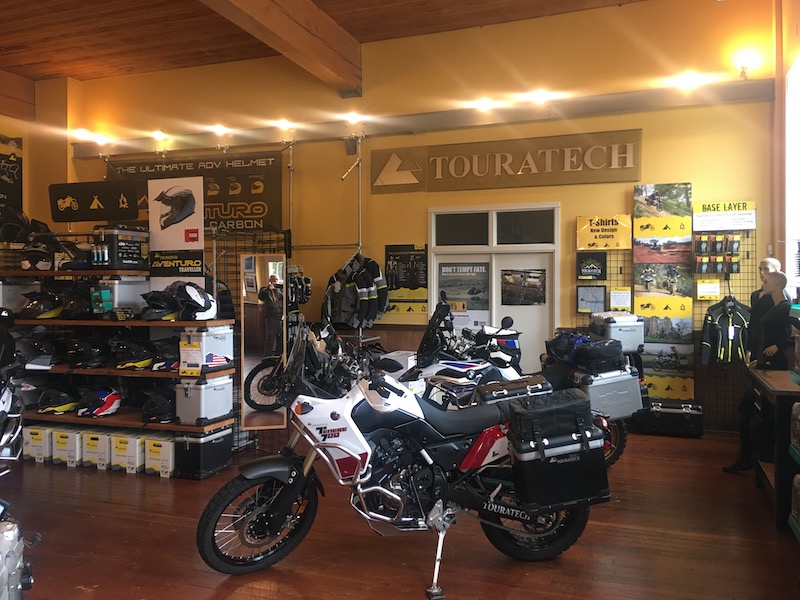 One of two Tenere 700s on display at Touratech. The other will be given away in a drawing.

I had two tours planned for Saturday in Seattle: first up was the Chihuly Gardens and Glass exhibit. Dale Chihuly is a local artisan but is known worldwide for his incredible blown glass art. 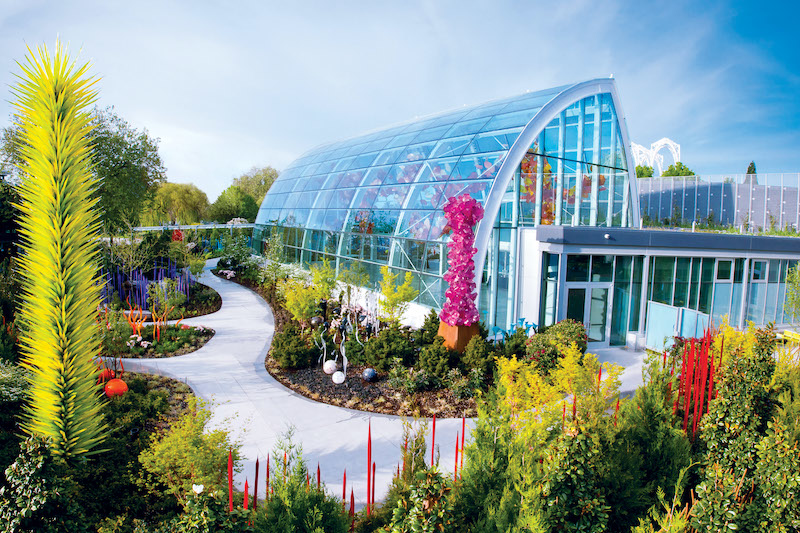 Hard to believe, but a lot of what you see in this photo is blown glass. Outside in the gardens, and inside. Obviously they don’t have the hailstorms here like at home. 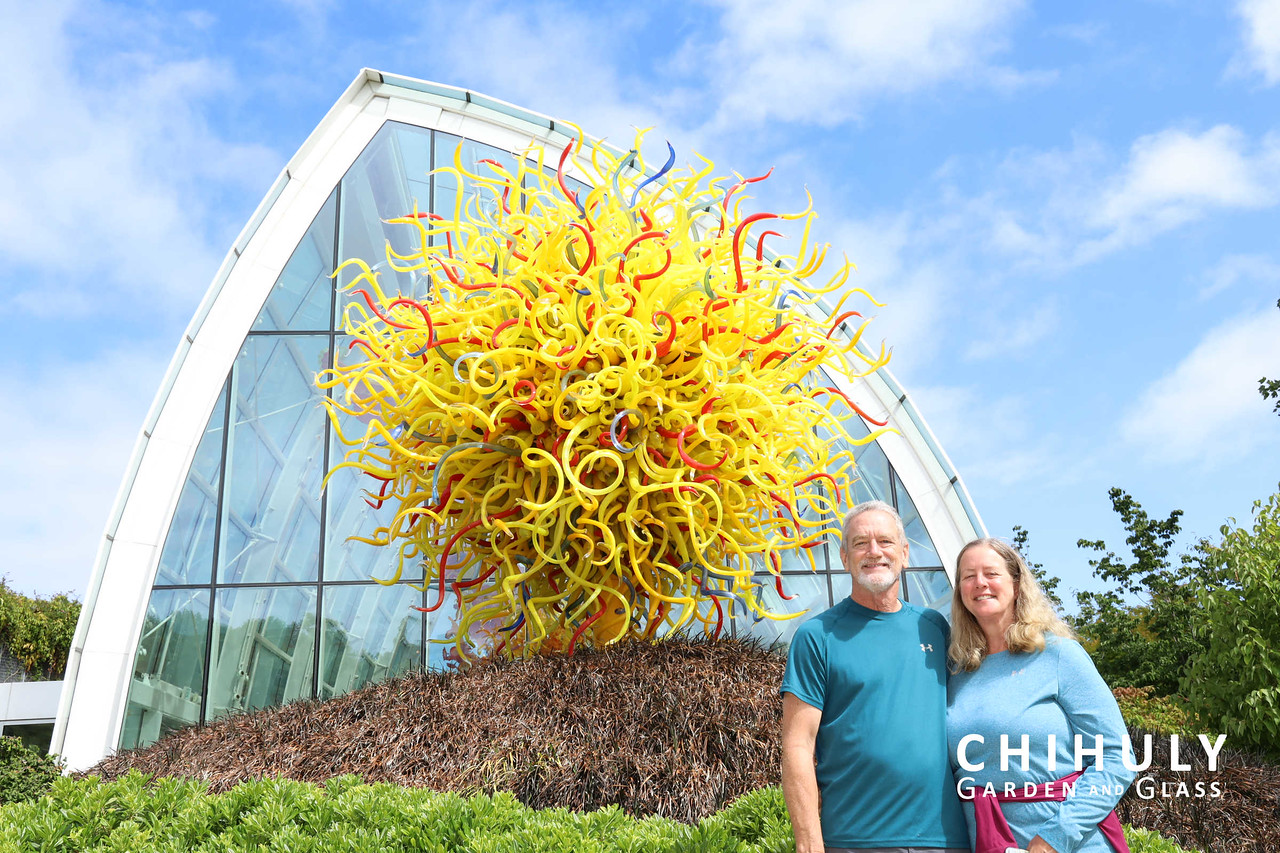 That Medusa-looking tree behind us? Hundreds of pieces of blown glass. Amazing. 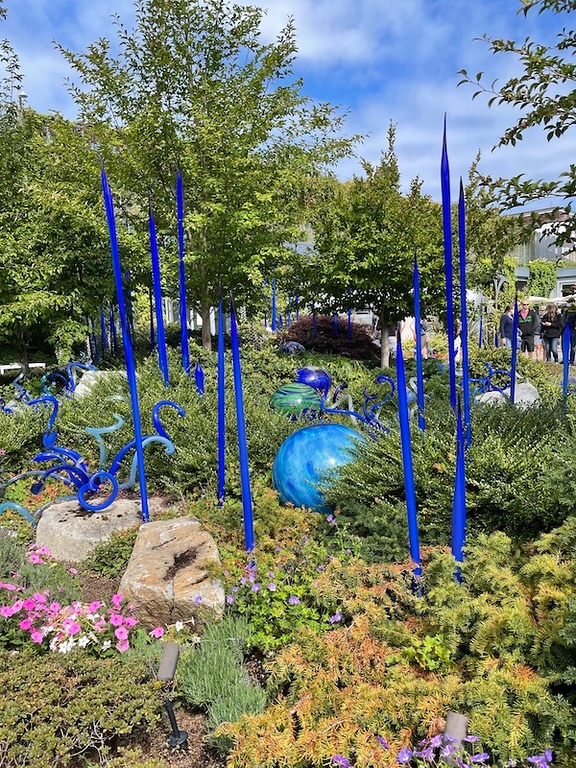 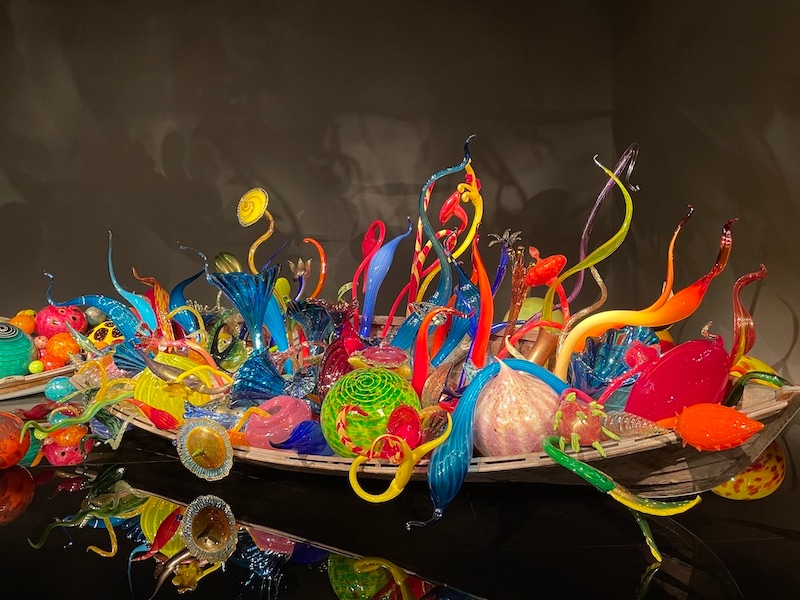 For perspective, these pieces are sitting in a real boat that is probably twelve to fourteen feet long. 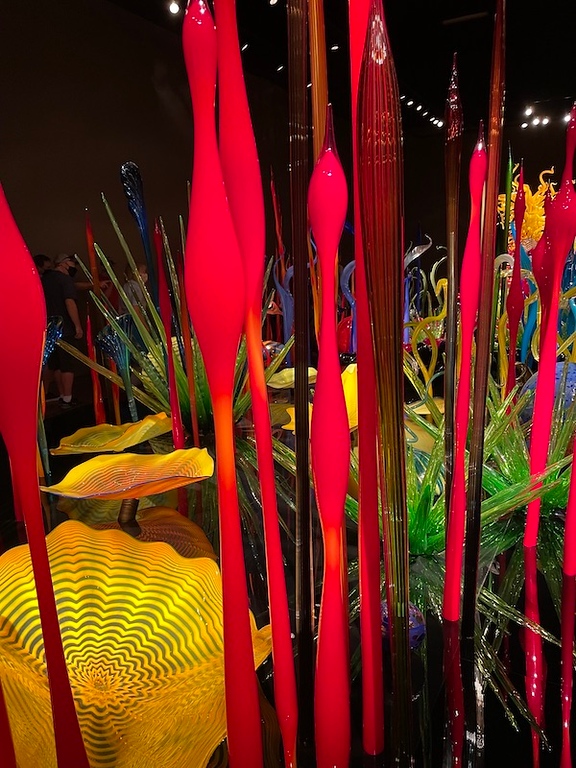 This piece took up an entire room; the art itself was probably ten feet wide and thirty to forty feet long.

After visiting the Chihuly exhibition, which is next to the Seattle Space Needle in the World’s Fair park, we walked to Pike Place Market. This of course is one of Seattle’s biggest tourist attractions (something I usually try to avoid), and on this Saturday it was absolutely packed. We wandered the market and had lunch, then took off on our next walk.

This place is interesting, but way over-crowded. 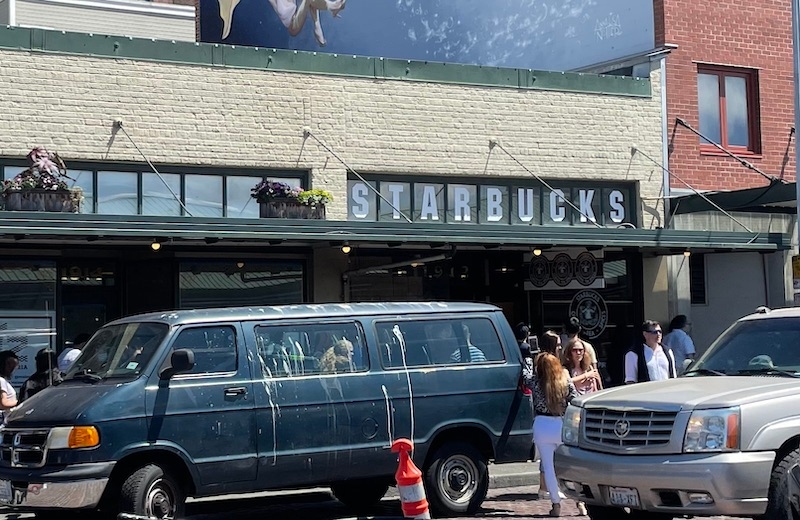 Across the street from the market, and behind that crappy looking van, is the original Starbucks. The line was out the door and down the street to get a coffee. I’m sure there’s something special about the coffee at this first location, but there’s one on every other block here, in addition to a ton of other coffee houses.

Next was a visit to the Spheres. This horticultural phenomenon is actually three large spheres creating one huge space. Inside there are four levels of walkways, meeting areas, and general areas to relax and confer. There are over 400 species of cloud forest plants in the spheres, many from South America, but others from around the world. There is also a 50-foot tall ficus tree. This building is in the middle of Amazon’s downtown Seattle complex, and is only open to the public the first and third Saturdays of each month, by reservation. 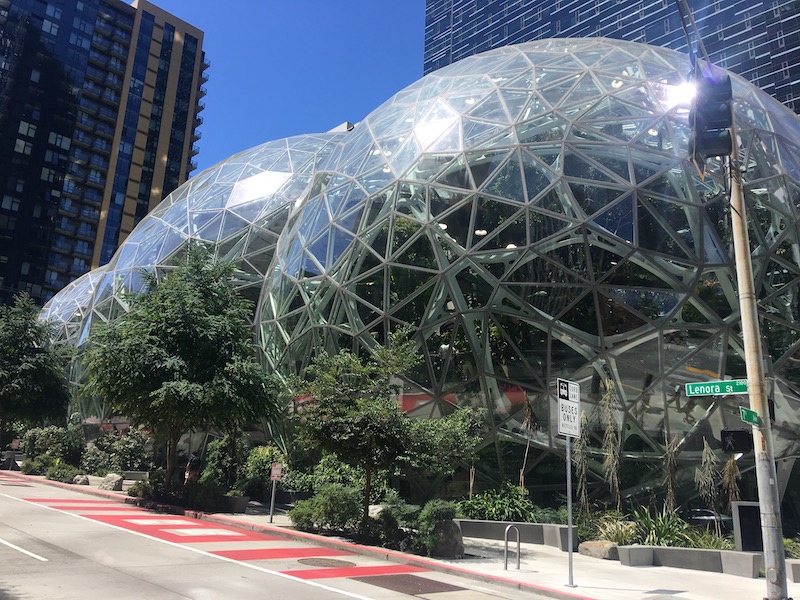 Four stories tall and a block long, with open-space meeting rooms and a cafe inside. 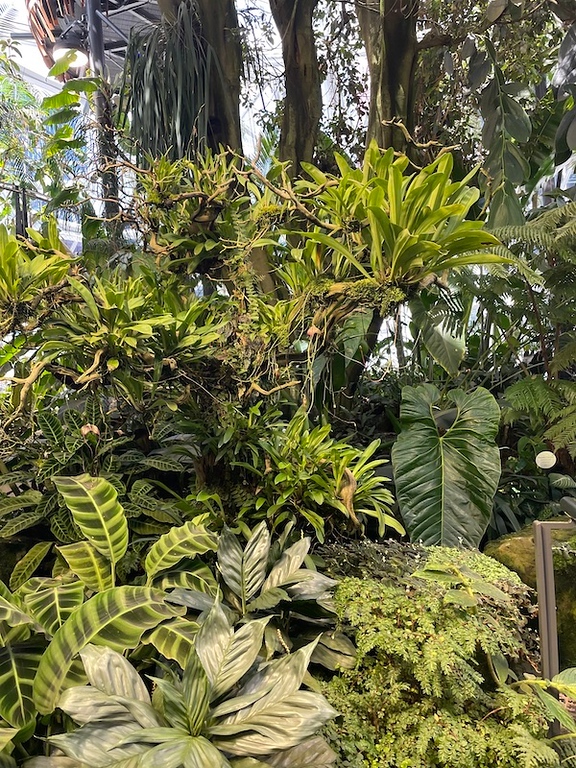 Much of the Amazon rainforest grows in here. 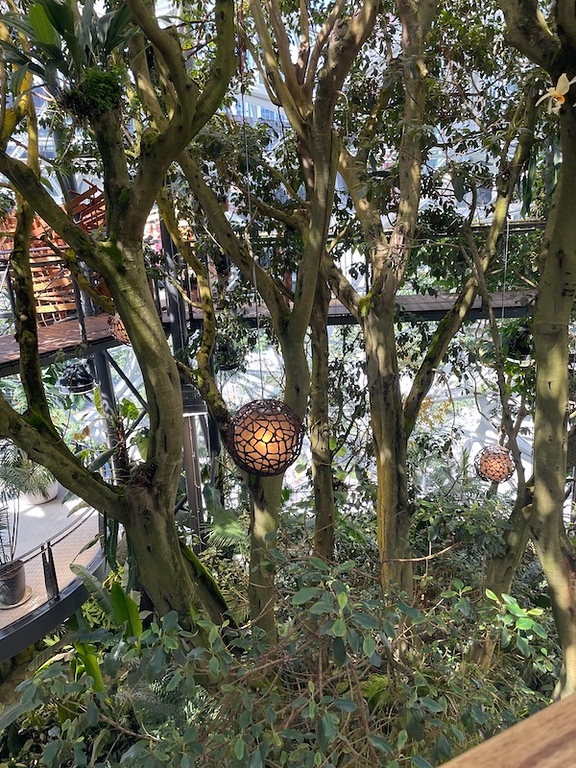 That evening we took the light rail back into Chinatown/Japantown for dinner. I think we spent more money this day than in the past week or two of our trip, but it was all worth it. And our reduced lodging and food expenses over the past weeks helped make this possible.