I have entered a part of the world where 125 miles in a day approaches the limit, at least in the places I go, which was my intention from the beginning.

I slept very well after the long day of caving, swimming, and tubing in Semuc Champey, although rolling onto my right side would wake me quickly from the soreness of the bruises. Still, well worth it for an incredible day.

I packed up early as I knew it would be a long ride to Antigua. Although I was done packing by 6:45am, I chose to have an early breakfast and allow the two colectivos (in this case, two pickup trucks) to pick up all of the backpackers that were departing Utopia that morning. Knowing that I had to climb the same rocky one-lane hills that these trucks were now headed down made it an easy decision to sit and wait. No reason to meet them half way up if it wasn’t necessary.

By 7:30 the trucks were loaded and gone, and I was ready to get on the road. There is only one way out of Utopia back to Lanquin, but after that my GPS routed me north rather than south. As usual (as I said, I’m a slow learner) I followed the GPS instead of stopping to confirm. After about 15 miles, I began to realize that instead of taking me towards Coban, Garmin was taking me back the way I had come, back another 50 miles north on the nasty, rocky, pot-hole filled dirt road toward Lago de Izabal. And as usual, the GPS said I was only three and a half hours from Antigua (which I knew couldn’t be correct, because the backpackers got on a bus in Lanquin that took eight hours to reach Antigua). So I settled in for the ride, figuring that once I got back to the lake and turned southwest, I’d hit a good highway and it would be smooth sailing all the way to Antigua.

Wrong. Again. After 50 miles I finally hit the intersection at the lake, and turned southwest onto new unexplored road. Within a couple of miles it turned to that nice new concrete again, and I rode that for about six miles before it again turned back to even worse single lane dirt with even bigger potholes. At one point, I rode through a pothole (much too small and kind of a word) that was literally the size and shape of a backyard swimming pool, although fortunately it was dry, and there was no deep end; the whole thing was about three to four feet deep and about thirty feet long, with a nice slope at each end to “wade in”.

The road continued like this for another 50 miles, until I came to an intersection with an actual highway. Until now, I was lucky to average 15 mph. From there it was truly a nice two lane paved highway out of the mountains into Guatemala City and, after some traffic in the capitol, another nice ride into Antigua. Another eight and a half hours of riding and glad to be done. 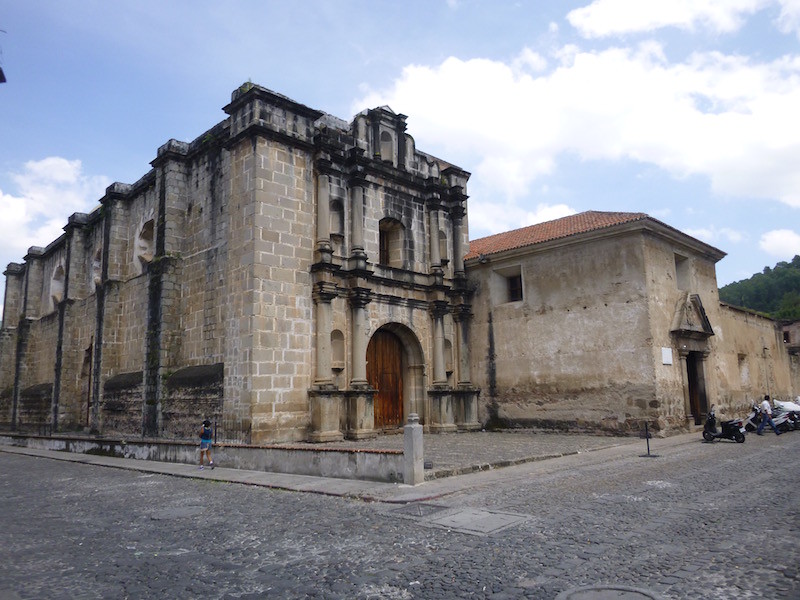 The fountain in the middle of Parque Central

Antigua is another beautiful, old colonial city that has attracted a lot of tourists. Many come here to study Spanish as it is considerably less expensive than Mexico. While Guatemala City has a fair amount of crime and danger, Antigua, which sits just outside of Guatemala City, is kind of the nice, genteel suburb. Because of this, the price of housing and the cost of living in Antigua has skyrocketed, and local workers find themselves living outside of Antigua, in places like Jocotenango. So, in essence, the system is no different than many parts of the U.S. 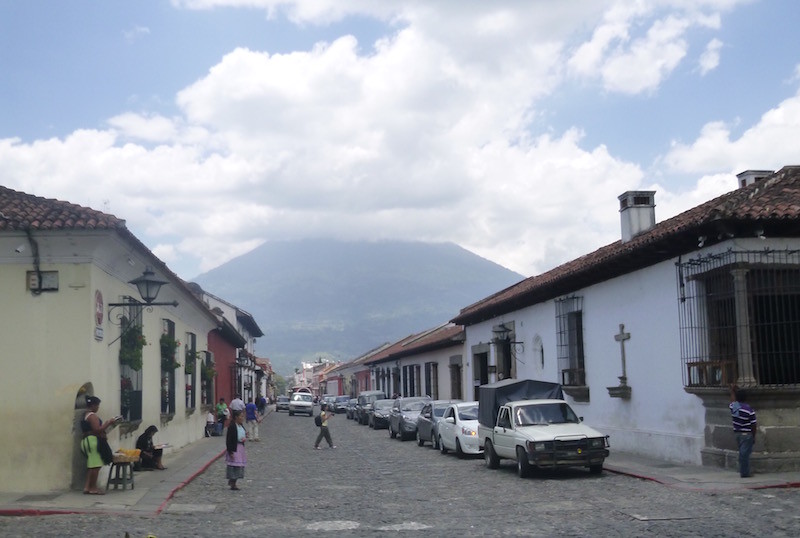 Volcan de Agua in the background, the top shrouded by clouds.

As I arrived into town, the school band was parading through the town square, with a procession.

According to one article I read, Antigua has the largest Semana Santa (Easter week) celebration in the Americas, drawing up to 200,000 people each year to watch the festivities. As I walked around town, I stumbled on this empty lot filled with fiberglass figures on hand-pulled carts. 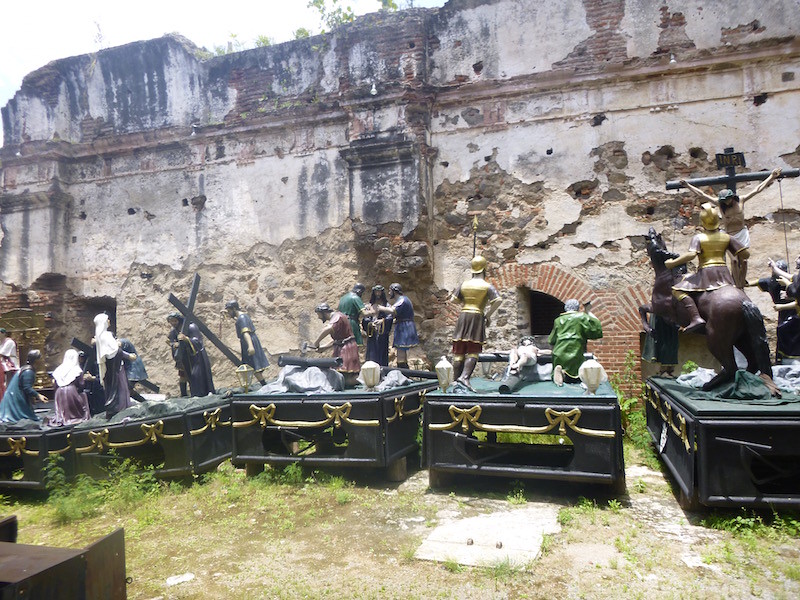 These are used once a year in one of the parades. The rest of the year they are stored here.

I am here to learn as much Spanish as possible in ten days of classes. I go to school each day from 8am to noon, and study in the afternoon. It’s not easy (even though my teacher keeps telling me “es pan comido” — It’s a piece of cake), but I’ve set myself up to study and learn. I am staying right at the school; the family that owns the building where the school is housed also has four small homes on the land behind the school. I’ve rented a one bedroom house for two weeks, so my daily commute from my front door to my desk is about twenty paces.

Everything you need. No need for bigger. Bedroom and bath to the right.

Antigua is full of Spanish schools, and it’s odd to see so many Americans, Canadians, and more speaking Spanish instead of just being the english-only tourists. It’s also clear that the town is used to this, as I’ve noticed that the locals tend to speak slower than in other places I’ve been; an obvious appreciation of the needs of the students. 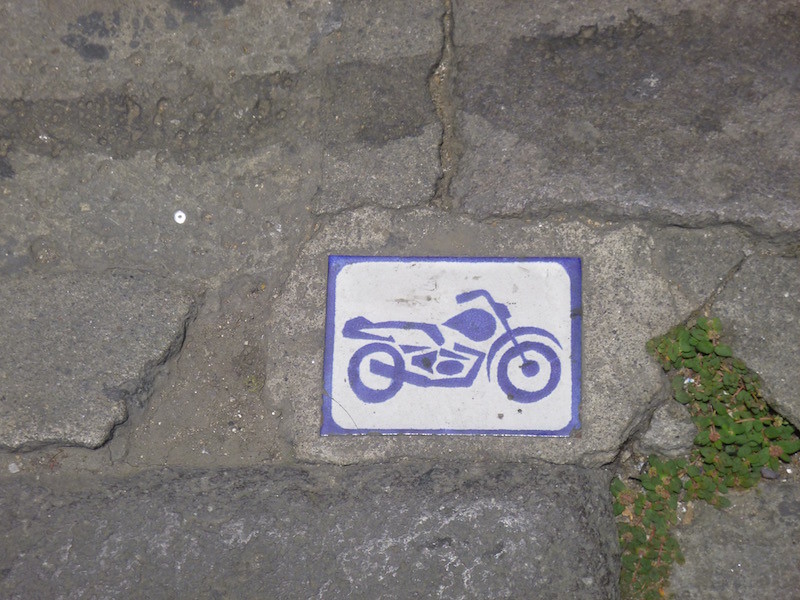 What a great concept. Since Antigua is a UNESCO Heritage Site, there is little signage throughout the city to disrupt the views. However, these little tile gems are all over the place. Each time you see a curb painted white, there is one of these in the sidewalk, indicating parking for motorcycles only. 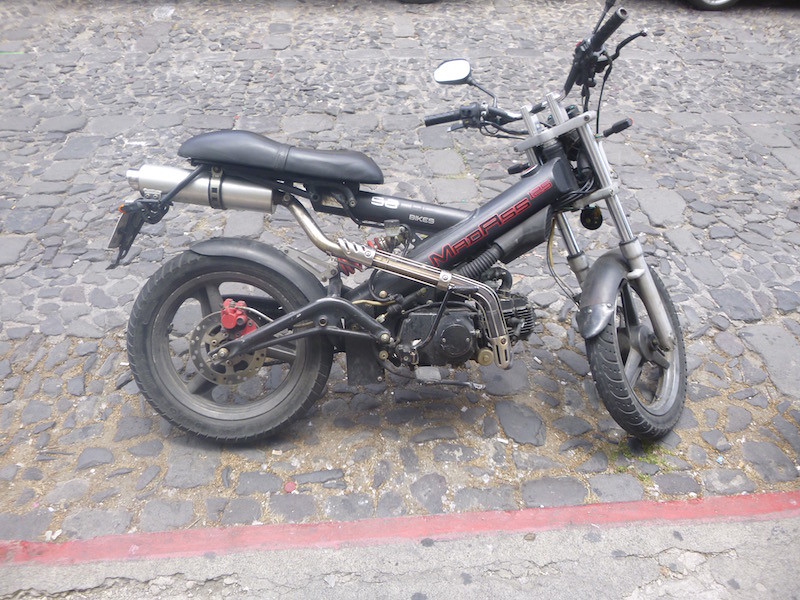 You see a lot of different brands and styles of motorcycles here. This is a MadAss 125. Very creative.

I have the weekends off, so I hope to do a bit of sight-seeing this weekend. Until then, the blog will necessarily slow down for a while.

3 thoughts on “Semuc Champey to Antigua”