It’s getting a bit harder to find good wifi on the road, so I’ll post a few posts at a time when I can…

It’s Easter weekend, and while summer has just ended, it’s a holiday (think Labor Day at the end of summer in the U.S.). I’m headed first to Franschhoek (Afrikaans for “French Corner”) and then to a campground on the river for my first night in the tent in Africa.

Franschhoek is less than an hour from Cape Town. Nestled between mountains in a beautiful valley, the road there is lined with vineyards and wineries for miles. It seems like every few hundred yards is an entrance to another winery. They all have beautiful large Provencal looking buildings. It definitely feels like I’ve arrived in Provence. It’s a town of only 15,000 residents, but it swells on weekends and holidays.

Huguenot museum in Franschhoek. Huguenots were French protestant refugees in the 16th and 17th centuries who settled here after fleeing religious persecution in France. 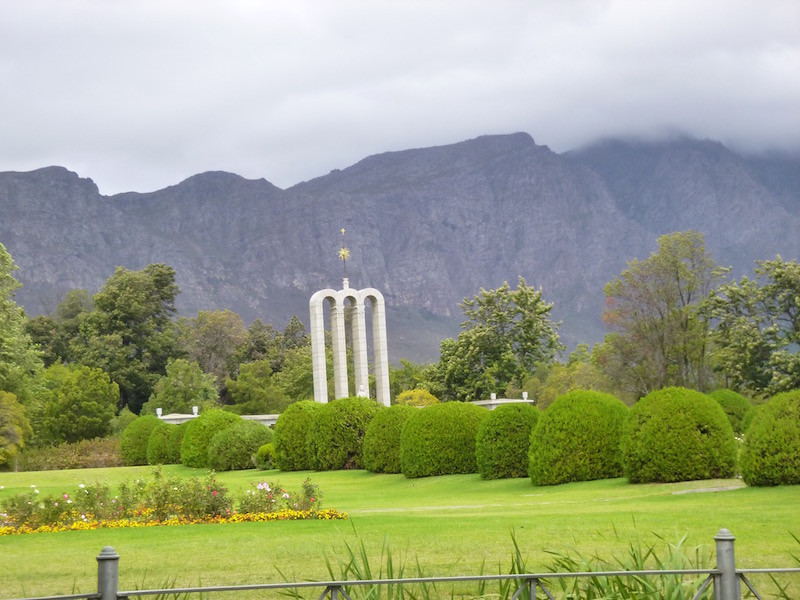 Just before riding into town, I spot the Franschhoek Motor Museum on the opposite side of the road, and turn around to take a photo. I really wanted to tour this museum, but I visited their website and found that while their collection includes antique cars and motorcycles, motorcycles are not allowed on the grounds. Seemed very hypocritical to me: “If you are a true motorcycle enthusiast, you would surely appreciate our collection of rare motorcycles. But you are not welcome to view them. However, if you arrive in a car and have no interest in motorcycles, feel free to have a look.” I even sent them an email explaining that I had ridden my motorcycle around the world to see their collection, and received no reply.

No motorcycles allowed to visit this motorcycle museum.

I rode through Franschhoek all the way from end to end twice. It’s a small town. A beautiful, but touristy, small town. I quickly noticed that I was the only motorcycle in town. After seeing tons of BMWs all over Cape Town, I thought sure I’d see a few here, mixed in with the occasional vintage Rolls Royce and Mercedes that I saw easing down the main street. Perhaps Franschhoek is just too snooty to accept any motorcycles.

After two passes through town, and not finding a parking spot within viewing distance of a sidewalk cafe, I decided to ride on. I’m sure the parking lots off of the main street are safe, but with all of my gear on the bike i just didn’t feel right walking away from it. In other places in both South America and in Cape Town, I simply pulled over the curb and parked on the sidewalk (no reason for a bike to waste an entire car space), but here it just didn’t feel right.

I rode back through Stellenbosch where I ended up having lunch in a strip center Chinese restaurant (“No eat here. Take away only. Chopstick cost extra.”)

After a late lunch I headed towards the campground I had found on iOverlander.com. It’s Easter Saturday, and I was afraid I might not find a space for my tent, so I figured mid-afternoon might be better than waiting too late.

When I arrived at Berg River Resort, I asked if they had a spot for my tent.

“Yes, but one problem. We don’t allow motorcycles.”

What is with this country??

“You can camp here, but you’ll have to leave your bike just inside the gate and walk to your campsite.”

After a brief discussion, I agreed to their terms. It turns out, my campsite (the last one they had) is in direct view of the gate and only about 100 yards away. It took three trips to haul my gear from the bike to the campsite. As I was covering the bike, two guys in a loud small car came through the campground. If it’s the noise that made them prohibit motorcycles (and I don’t know that’s the case, but I suspect it is), then the Honda Civic just proved that point wrong.

Hard to see, but three trees back, you can just see my blue motorcycle cover. That’s the entrance to the campground, and as far as motorcycles are allowed to go.

I had expected to be denied access to the National Parks in Africa due to safety concerns with the wild animals. I was not expecting to be denied access to motorcycle museums and campgrounds. Still, this is the only real negative I’ve found so far in South Africa, and it’s offset by the tremendous kindness that continues to arise from total strangers. Like tonight: as I was about to fire up my stove to cook my now standard pasta-in-a-mug dinner, my neighbors at the campsite, Franz & Christie invited me to share their dinner, which was way better than my pasta…rice and veggies stir fried with ostrich meatballs. After dinner, Franz pulled out his Africa Road Atlas, turned to the South Africa section, and began circling roads and places that I should see. Then he gave me the book! I couldn’t believe it. It includes nearly all of the countries I intend to visit. Inside the cover, they wrote their phone number, and told me to call them if/when I got to Mossel Bay and I could stay with them. Unfortunately, I may pass through Mossel Bay before they even return home from the campground, but if the timing works, I intend to take them up on their invitation.