I spent a night in Helmeringhausen at the Hotel and Guest Farm. It turns out Helmeringhausen isn’t a town. It’s a 27,000 acre ranch with a support system in the middle of it, including a nice hotel with campsites, a gas station, a store, and more. It also turns out that the current owner, Bjorn Basier, is a motorcyclist, and often leads tours from Windhoek to Cape Town on the gravel roads, using Yamaha XT660 Tenere motorcycles. He’s also a die-hard Yamaha fan, and his son has a Yamaha Tricker (sort of a street-legal trials-looking bike using the same engine as my XT250). 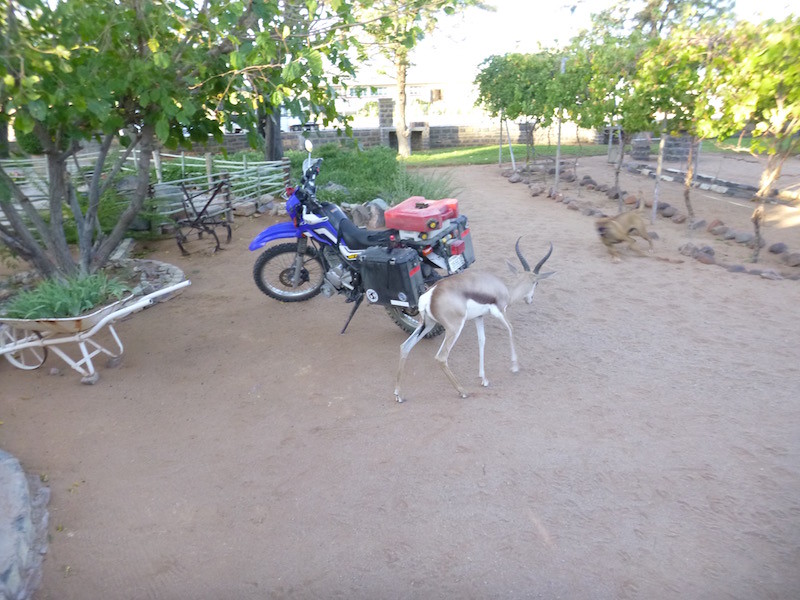 Young pet Springbok that Bjorn hand-raised. Seems to think it’s a dog, and loves to chase the dog around my bike. 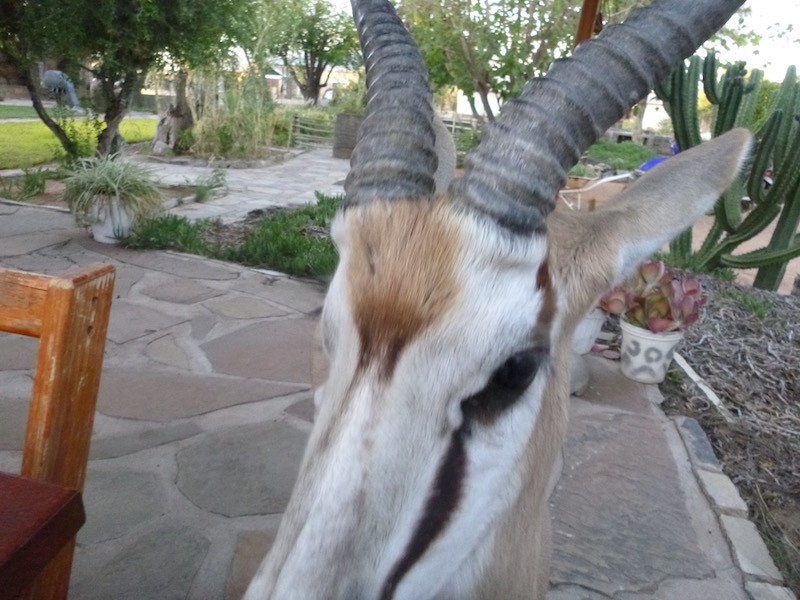 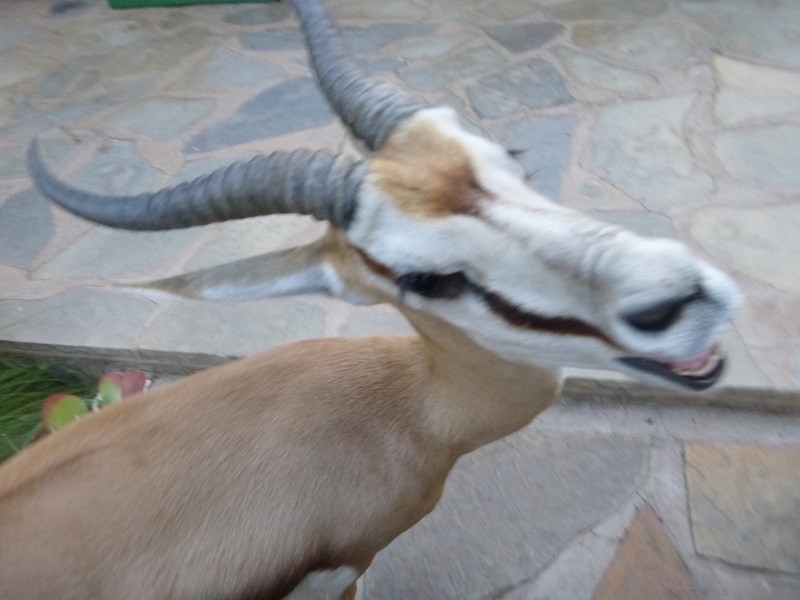 Leaving Helmeringhausen, I stayed on the dirt road for another 180 miles to Sesriem, which is the entrance to Sossusvlei, in the Namib Naukluft National Park, which is home to some of the largest sand dunes in the world.

Namibia is roughly one and a half times the size of Texas, with the total population of just Houston. The average income per person is US$2,000.

This means that the country’s transportation infrastructure is focused primarily on its’ cities: primarily Windhoek and Swakopmund. If the road connects those cities to another important place (such as South Africa), the road is paved. That makes for about five or six paved highways in the country. Everything else is dirt and/or gravel.

I’ve spent the last 250 miles on what is referred to as a “gravel” road, but I can tell you that it is more sand than gravel, and can be a bit deep in places. I have another 300 miles to go before I see pavement again. Such is Africa, and I’m told that this is still the more civilized part.

The other complicating factor in dealing with sand and gravel roads is heat. The temperatures rapidly hit near 100 degrees F or higher during the day, but cool down nicely overnight. This can limit travel to the morning hours, from sunrise until around noon, at which point it’s time to find shade. 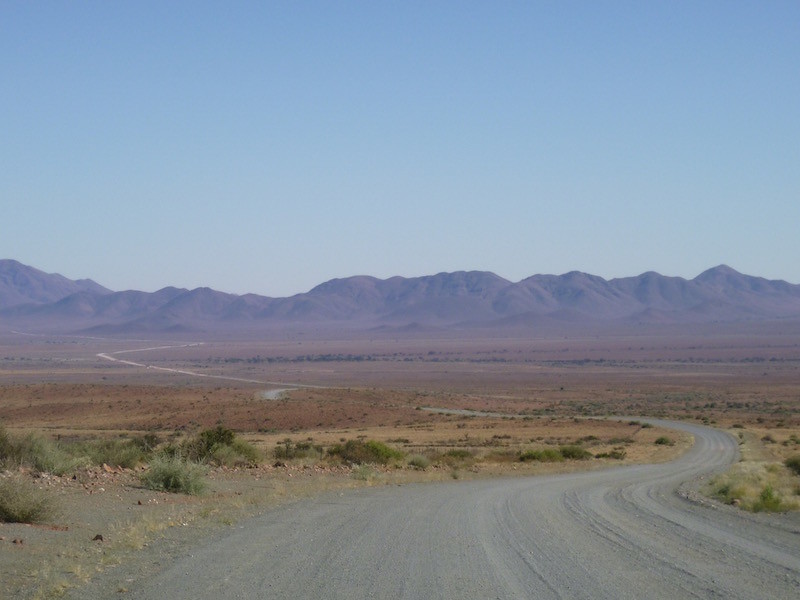 The road from Helmeringhausen to Sesriem. 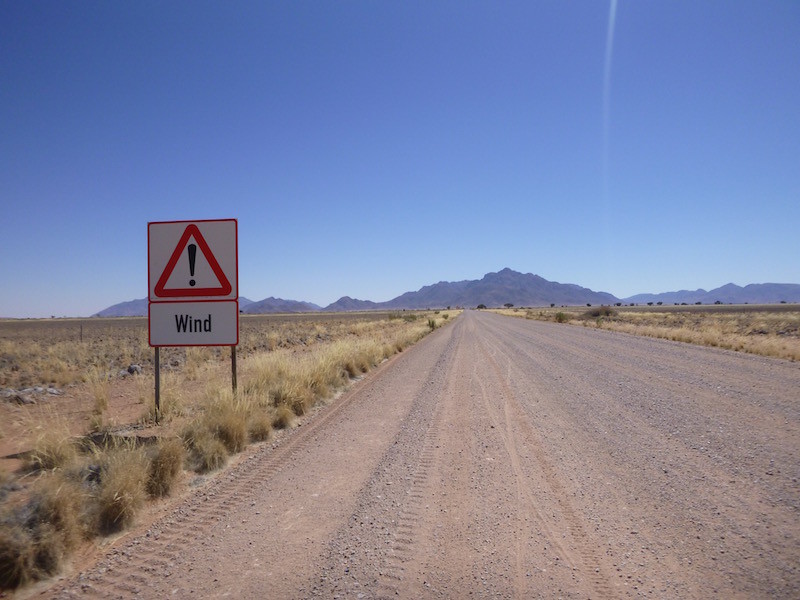 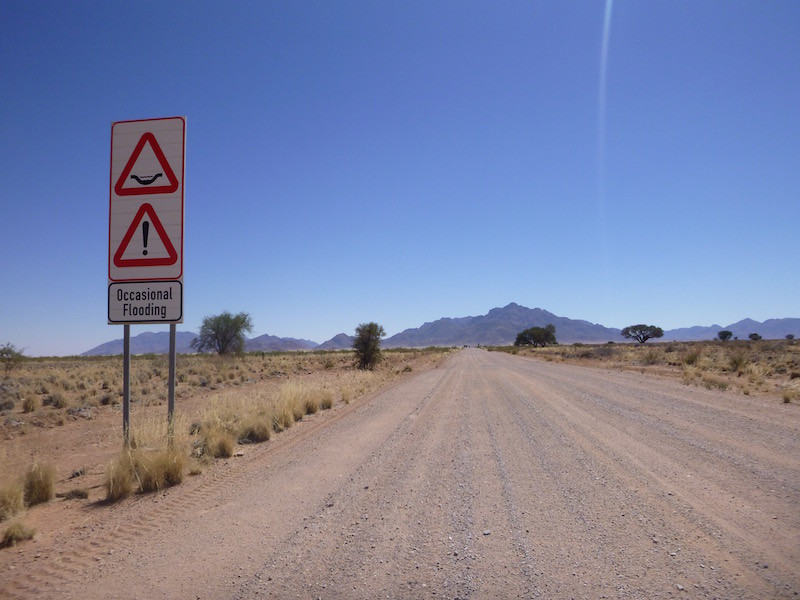 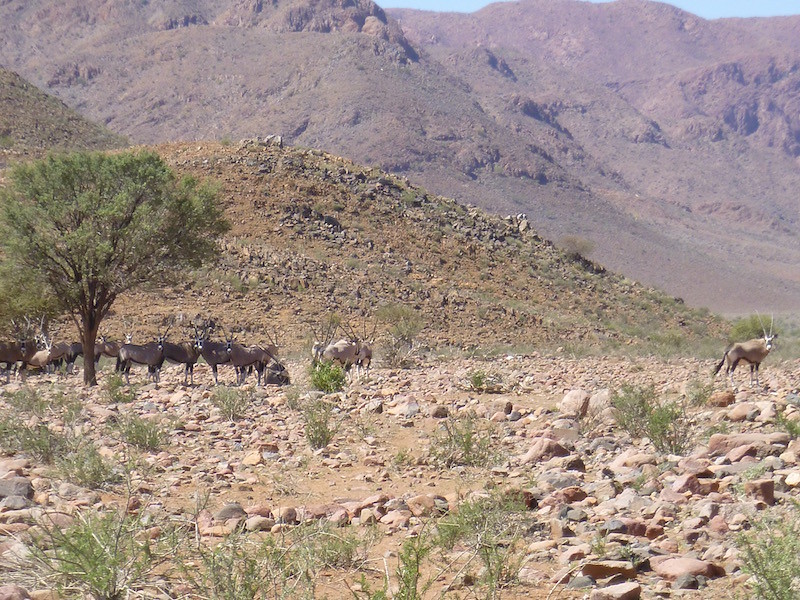 Oryx alongside the road.

Sossusvlei sits 63 km west of the small settlement of Sesriem. It is hundreds of miles of gravel road to get to Sesriem, but once you cross through the gate to Sossusvlei, the 60 km dead-end road is suddenly paved. It is another example of how the government realizes an investment in its’ major tourism attraction can return dividends.

The dunes here are huge, reaching as high as nearly 1,000 feet, and have a red tint from the iron oxide in the ground. Between some of the dunes is salt pan, a dry lake bed. Deadvlei, the most famous of these, is populated with dead Acacia trees, which makes for a stark contrast of colors. 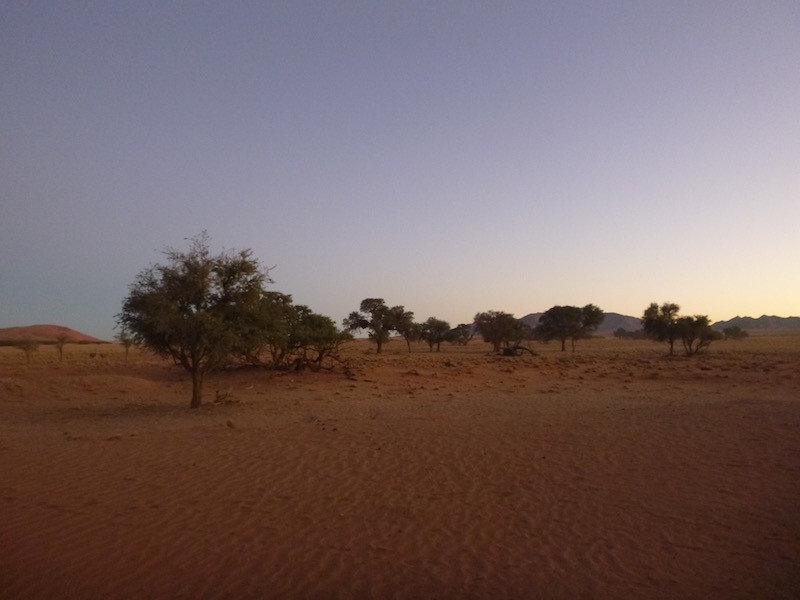 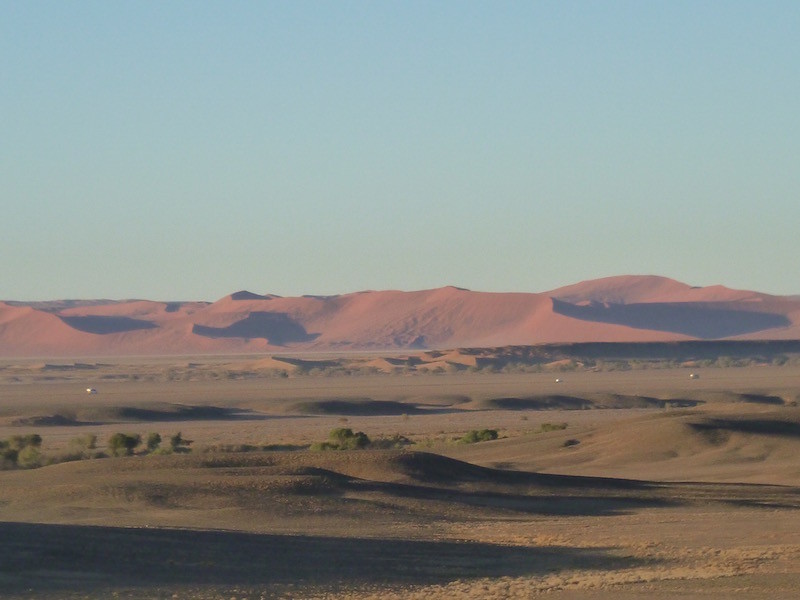 A sidewinder adder. Watch him bury himself in the sand to await the unsuspecting… 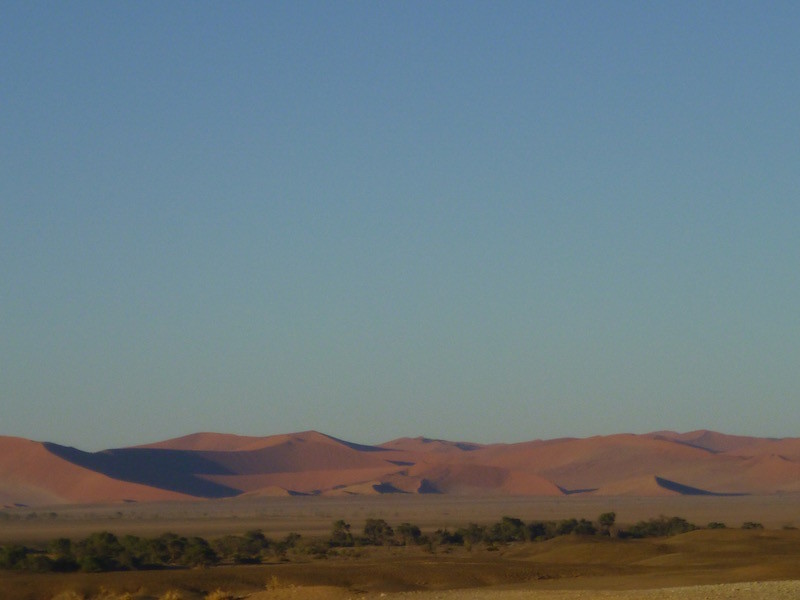 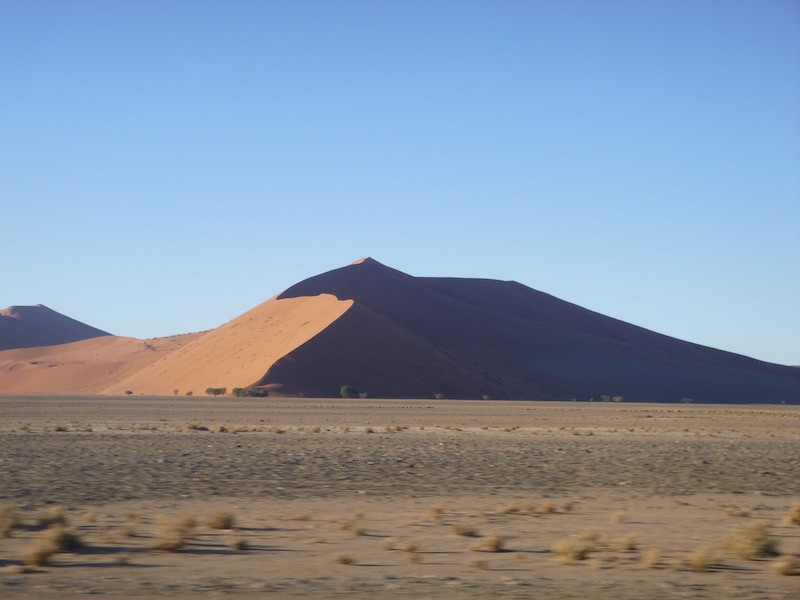 People-ants marching up the dune. Reminded me of the old Ant Farm as a kid. 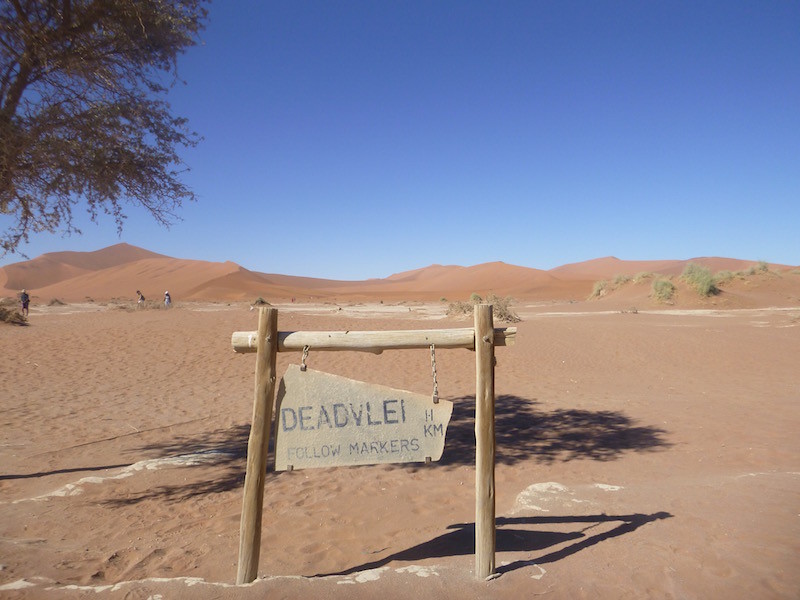 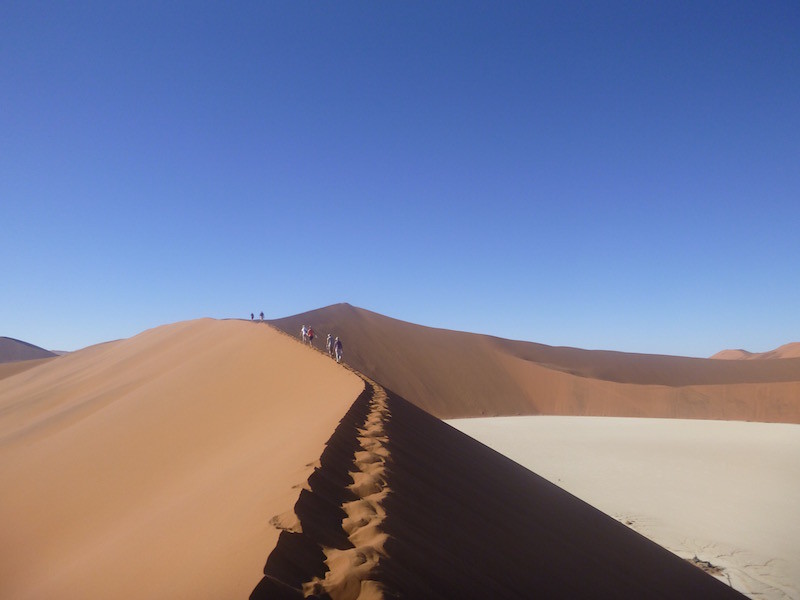 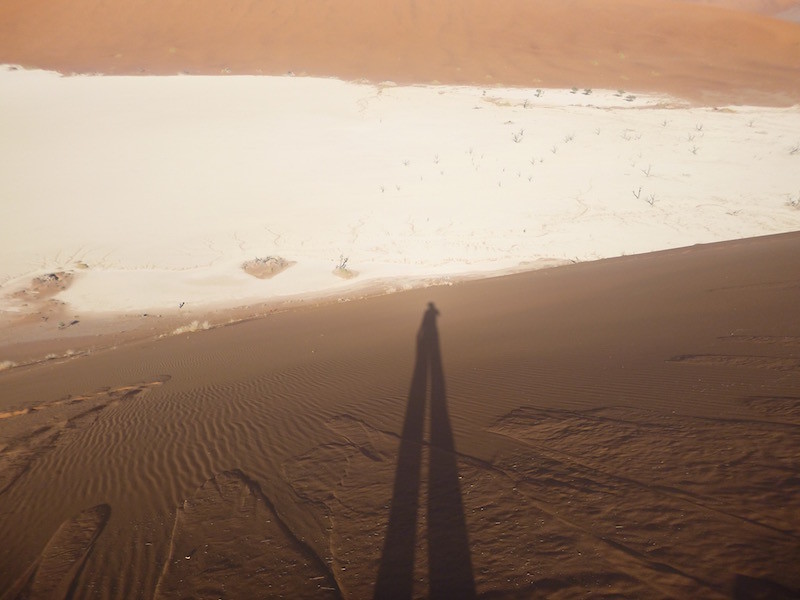 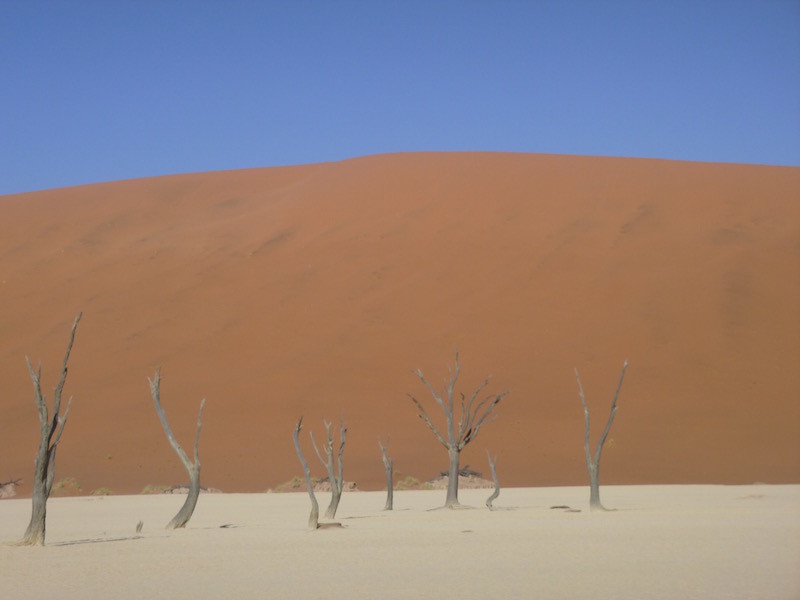 Springbok waiting out the mid-day heat.

I loved these camp sites. There were 12 of them, each has their own flush toilet, shower, and kitchen sink, with a raised stone paver area for the tent, along with electricity. All for about $10 a night.