I knew early this morning that today was going to be a challenge. I could feel my entire body aching and my throat was sore. Flu-like symptoms had me a bit worried, but I needed to move. I slowly crawled out of bed and forced myself to pack. I figured if I felt worse by around 10am I would reconsider.

By 11am I was still under the weather, but decided I was doing well enough to head out. I said goodbye to my friends at Colombia Paragliding and hit the road south, down Highway 45 past San Gil and on to new landscapes. Somewhere near San Jose de Pare I passed a motorcycle accessory store and decided to see if I could find a spare inner tube to replace the one I had donated a couple of weeks ago to the guy in need on the side of the road. And thus began my day of Spanish lessons.

In case anyone is interested, here’s a quick rundown on some Spanish terms and differences between Spanish in Mexico and Spanish in Colombia, and how to buy an inner tube (it can’t be that hard, can it?):

First, an inner tube is called a “neumatico”. Not “tubo”. Tubo means “pipe”. “Tubo de aire” means air pipe, which confuses the poor girl at the parts counter to no end, and she wants to know if I want to buy a spare exhaust pipe, or a spare intake boot.

Next, you don’t buy inner tubes at motorcycle dealers, or motorcycle accessory stores. Even the ones that sell tires, like this guy today. Nope…you can buy a new tire from him, but if you want a new inner tube, you have to drive another 20 minutes out of town to the guy that fixes truck flats on the side of the road. In Mexico, these roadside flat-fixers are called “vulcanizadores” or “vulkas”. As you travel further south into Central America, those signs get replaced with ones that say “Pinchazos”, which literally means “prick” or “puncture”. Once you get to South America, at least in Colombia, they are called “montellantas”, which means “tire mounter”.

Also, just fyi, Mexican Spanish doesn’t always work in South America. My Guatemalan Spanish teacher warned me about this, but of course he couldn’t tell me everything. Some very basic things, like “Buenos dias” and “Buenas tardes” simply become “Buenas” here. “Adios” is not used. Here you pronounce goodbye “Ciao”. Yep. Just like in Italy. “Parking” or “Park” (as in your car or moto) is “Estacionaminto” or “Estacionarse” in Mexico. Here it’s simply “Parqueo”.

So by the time I got to the montellanta, I had all the words I needed, and was able to quickly buy a spare rear tube and continue on.

Further south at Barbosa I turned off onto Highway 62, and the scenery began to get even better. Not that it had been bad. Highway 45 is a two lane twisty road through the hills for the most part, but 62 headed towards Arcabuco runs through a beautiful valley of indescribably green lush grass meadows and trees and a very Colorado-like feel.

At Arcabuco I turned off onto a smaller road for the last fifteen miles to Villa de Leyva, as it started to rain. The road started out nicely paved without any paint markings, just wide enough for two cars to pass each other. Slowly, it deteriorated into gravel and “residual pavement” (a nicer way of saying it was once paved but now is mostly potholes). Eventually just outside of Villa de Leyva it turned back to nice pavement and skirted through some beautiful homes and scenery.

Villa de Leyva sits in a semi-desert valley that, sticking with the Colorado references, reminds me of Gunnison or that area. 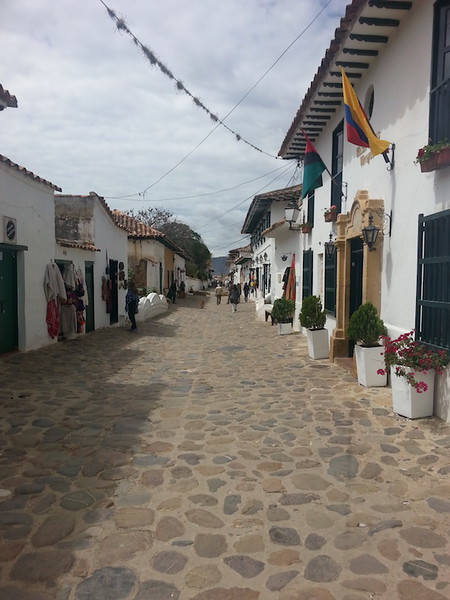 Headed downtown. Streets are rough cobblestone — much rougher than it looks. All the buildings are white. Beautiful and clean.

There is something about this town that has a good feel to it. It’s a tourist destination, but in a (Colorado reference again) Crested Butte sort of way. Not “cute” like Crested Butte but a similar laid-back, everybody-on-mountain-bikes-on-the-weekend sort of feel. At just over 7,000 feet elevation the weather is cool at night. The town itself is very colonial, with many sixteenth century buildings, and has maintained its’ colonial feel. It is about a three and a half hour drive from Bogota, so there is a lot of weekend Colombiano tourism here, and I suspect many of the nice, upscale homes on the outskirts are either Bogota residents or Bogota retirees. I could definitely relax and retire here.

Outside of town is the Terracota House. Looks something like a Smurf house, and is a big tourist draw. In addition to the odd architecture itself, are some of the same artist’s light fixtures, door panels, etc. 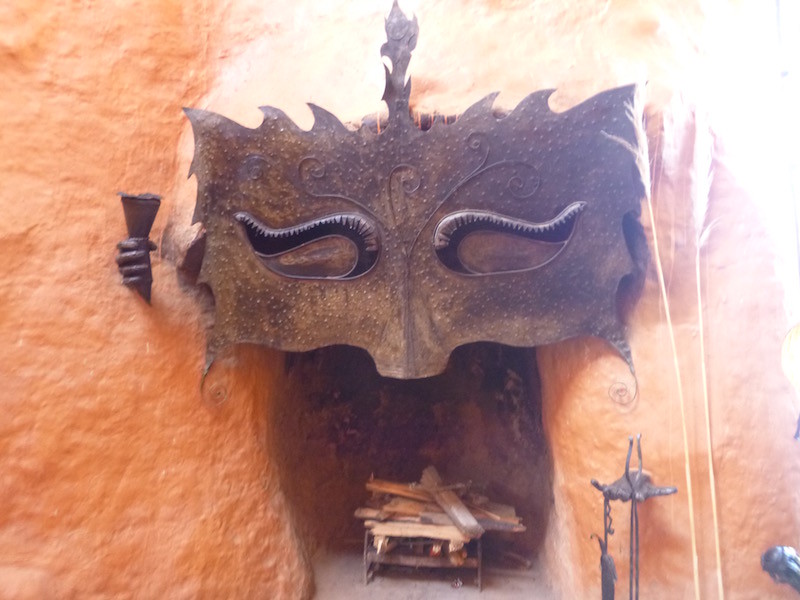 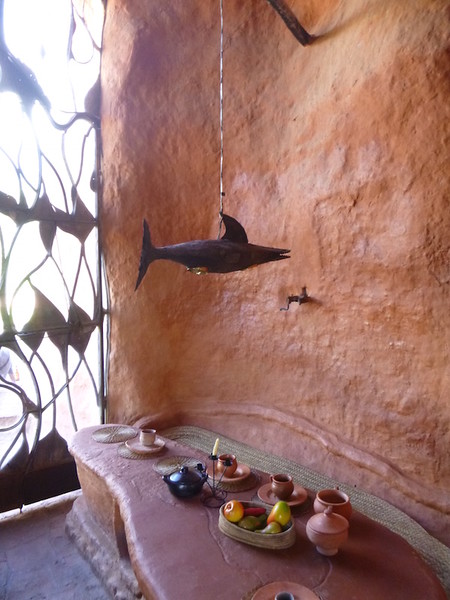 Yard decoration When I first saw this from the roof, it was a bit of a shock. Then I realized it was clay.

On the way back into town, I got stuck in traffic on the cobblestones and thought I was going to fry my clutch. When I finally got to the front near the town square, I saw what was slowing traffic:

There was a large horse show going on today in the town square, and apparently you didn’t have to have a large horse to be there.

Tomorrow I am headed down to lower elevations and higher temperatures again.

One thought on “Southbound”