I left Ngepi Camp mid-morning for a 340 kilometer ride across the Caprivi Strip, that narrow portion of Namibia that stretches between Angola, Zambia, and Botswana.

One last bathroom photo before I leave Ngepi Camp. This bathroom had the typical signs on the outside: one pointing to the “Ladies” entrance, and one to the “Gents” entrance. Turns out they both went to the same place eventually. Check out the details: pink plush on the Ladies side; lid padlocked in the “UP” position on the Gents side. I didn’t visit all of the bathrooms at Ngepi, but they actually have a walking tour of the restrooms.

The Caprivi Stip highway is a very straight, very flat road through what used to be known as the Caprivi Game Park, but is now Bwabwata National Park.

Lots of these signs along the Bwabwata National Park road. I crossed in the heat of the day, so I didn’t see any elephants. Others told me they saw quite a few in the early morning. 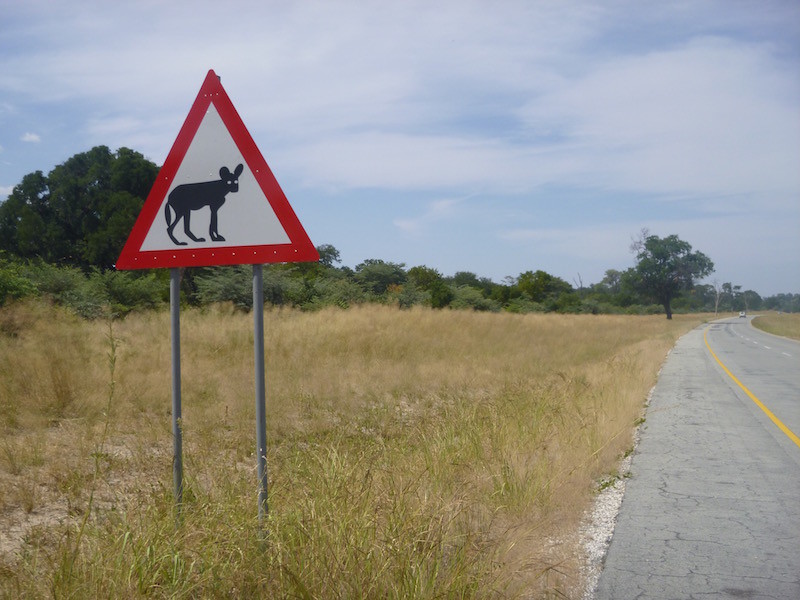 I didn’t see any of these evil hyenas with white eyes either.

A little more than half way across I came upon an 18-wheeler lying on its’ side on the opposite side of the road, but facing the same direction I was headed. It clearly hadn’t been there long, as there was a crowd of locals gathering around it. As I slowly rode past, I looked in my mirror and saw a pair of legs sticking through where the windshield used to be. I turned around and went back, thinking at least I had a first aid kit on the bike and possibly could help. I parked the bike and walked up to the driver, who was sitting in the cab with his legs sticking out. As he saw me approach, he climbed out. I asked if he was okay and he said he was fine, although he was clearly embarrassed at having turned the truck over on a flat, straight stretch of road. He couldn’t have been more than 20 or 21 years old, and didn’t seem to have a scratch on him. Very lucky. There didn’t appear to be anything I could do to help, so I got back on the bike and continued on. I was thankful that I didn’t meet him coming the other direction a few minutes earlier.

I spent Saturday night in my tent at Caprivi Houseboat Lodge, which I thought was an odd name for a campground, until I saw that they actually have several houseboats that they rent out as rooms, in addition to a few land-based chalets, and the campsites.

Sunday morning I crossed the border into Zambia at Katima Mulilo and took the very potholed road along the north side of the Zambezi River east towards Kazungula. The border crossing went smoothly, other than all of the “fees” necessary on the Zambia side, including:

So basically $140US to cross into Zambia, a country with poorly maintained roads and a struggling population. Where is all that money going? I paid only a small road tax fee to enter Namibia, and the roads that were paved were nicely maintained.

More than once, I was told by immigration and customs that they don’t see many motorbikes through here. I seemed to be a rarity. I glanced at the logbook that I had to sign at several windows, and didn’t see another motorcycle listed, nor another US citizen.

Not long after crossing into Zambia and passing through Sesheke (just past the border), the road began to look like many of the roads in rural Mexico and Central America: potholes stretched across the road and prevented a clear route through at more than about 50 to 60 km/h. There were very few cars, but I did encounter a few big trucks that were struggling to get through the potholes.

It was Sunday morning, and there were a lot of people on the road. Not cars. People. In a 140 kilometer stretch, I passed hundreds of people walking alongside the road, dressed in their Sunday church clothes. Women had nice dresses. Men wore suits with ties. Many carried plastic lawn chairs. They clearly walked miles to get to church and then home again. 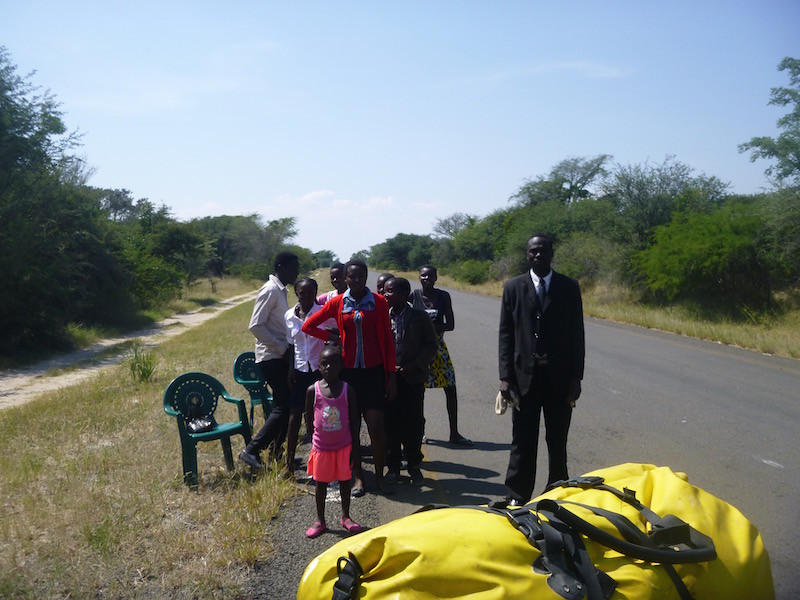 On their way home from church. I had passed dozens of similar families before turning around to ask if I could take this family’s photo. When I approached, there was clearly fear in the eye of several. I think they were unsure of why some white guy on a motorcycle was approaching them. When I asked to take their photo, they didn’t understand enough English to figure out what I wanted, until I pulled the camera out of my pocket, and suddenly they were all laughing and relaxed. They all wanted to see the photo after I took it.

Their homes were the same “local house” 8×8 foot or maybe 10 to 12 foot diameter circular hut in a dirt clearing surrounded by a fence made of tree limbs. In fact, nearly all of the homes are this style, though I did begin to see some that were made of mud or adobe walls rather than just the tree limbs I had seen earlier in Namibia. I couldn’t help but wonder where they kept their clothes in these small homes, as everything they wore looked so clean and well cared for. Even though the houses are very basic and surrounded by nothing but dirt, the women sweep the dirt floors and the dirt around the house nearly every day. They do their best to keep everything clean and orderly.

Eventually I arrived at Kazungula, and turned onto the road toward the ferry crossing into Botswana. I began to pass more than a hundred 18-wheelers parked alongside the road. This again reminded me of Central America. And sure enough, when I arrived at the border post, I was immediately approached by “helpers”, another sight I had not seen since Central America. This phenomenon seems to occur in the poorer countries, and in this case, it was only at this Zambian border post. I didn’t encounter helpers at the Katima crossing earlier in the morning, nor did I encounter helpers when I got off the ferry in Botswana. 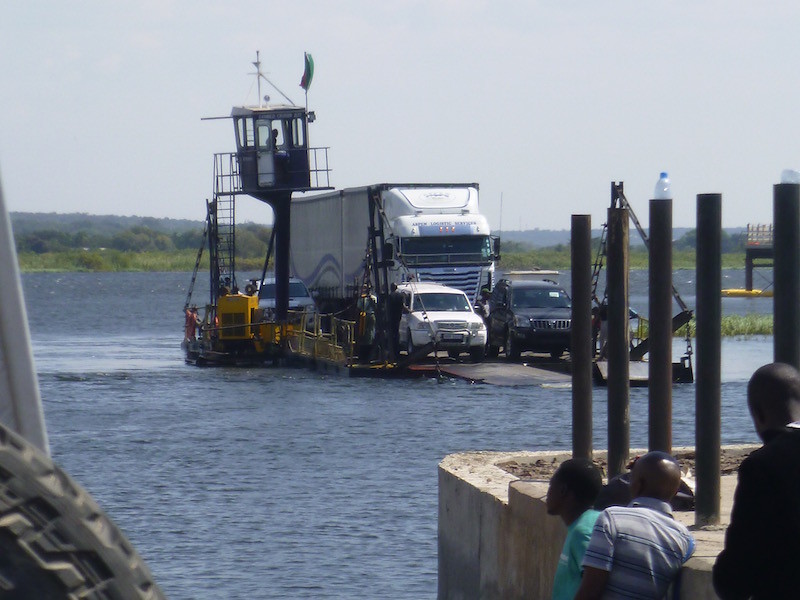 One big truck at a time at the Kazungula ferry crossing. With the ramps skimming and digging into the water during the crossing, I was a bit concerned.

The reason there are so many trucks waiting to cross is because the ferry can only hold one truck at a time, and this is the official border crossing between Zambia and Botswana. My carnet has very specific instructions stating that this is the only border crossing I can use to leave Botswana. 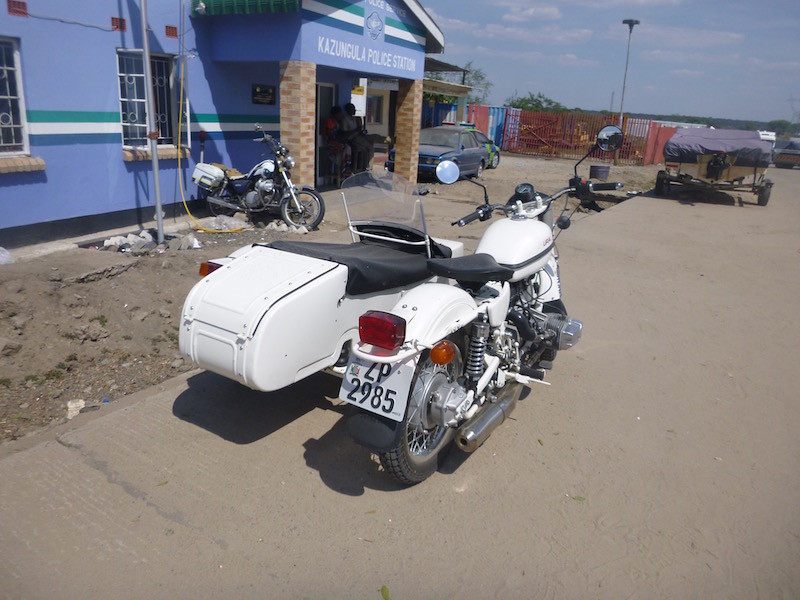 One of the locals on the ferry pulled out his cell phone to take a photo of me, and suddenly everyone wanted to be in the picture, so I gave him my camera as well.

Four countries all come together near this point: Zambia, Namibia, Botswana, and Zimbabwe, kind of like the “Four Corners” in the US where Utah, Colorado, New Mexico, and Arizona all meet. But not as nicely square as that.

The entry into Botswana was very straightforward (and without all of the fees of Zambia) and I was through immigration and customs in about ten minutes and on my way to my camp for the next couple of nights.

As I pulled into the camp, the guard at the gate told me to be aware of the monkeys and baboons. And she wasn’t kidding. The monkeys were everywhere, as were warthogs. Before I could get the tent set up, I had a dozen monkeys in my campsite watching me. 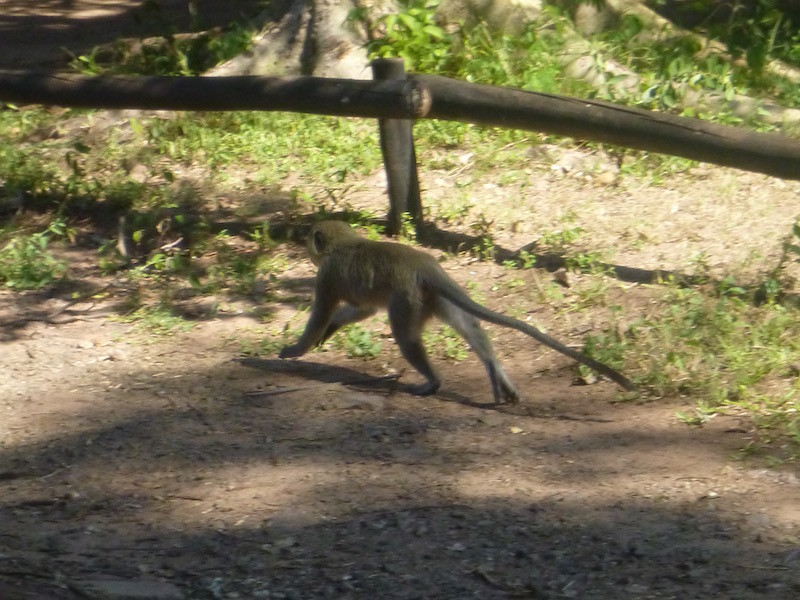 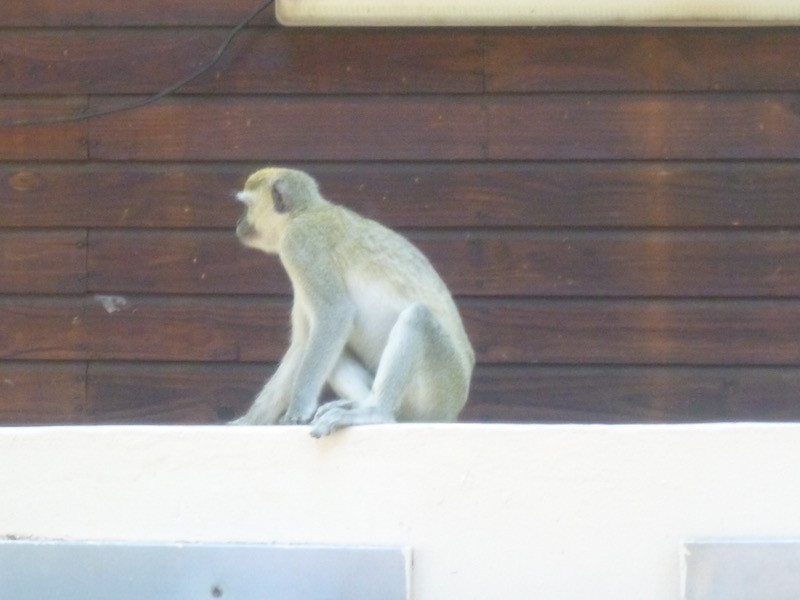 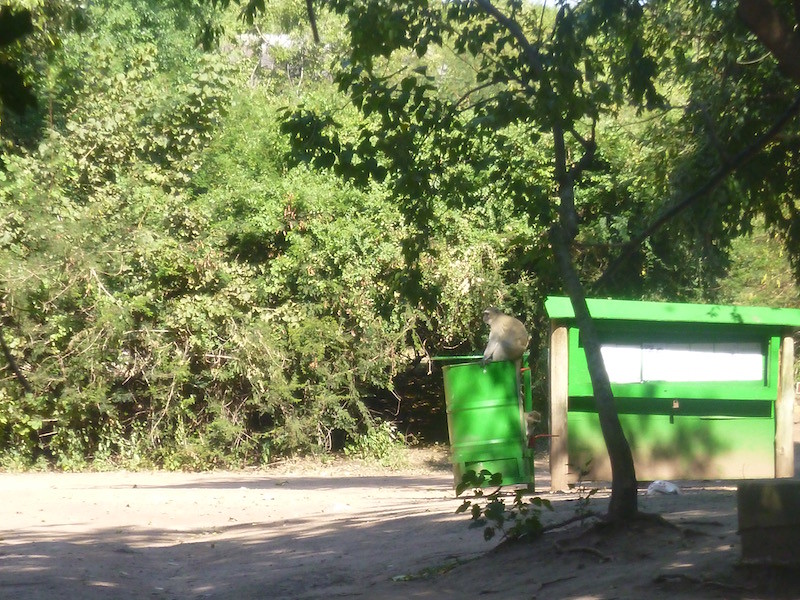 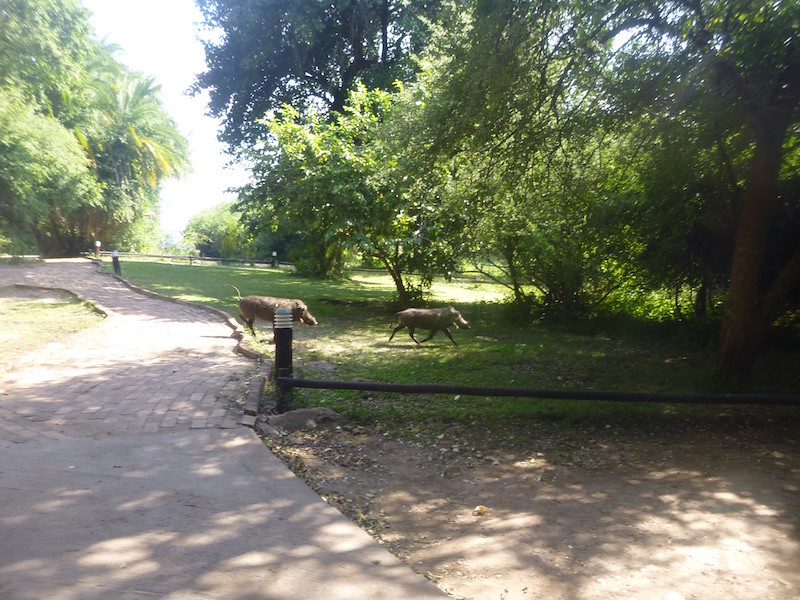 Haven’t met the baboons yet, but the warthogs are about as thick as the monkeys here. 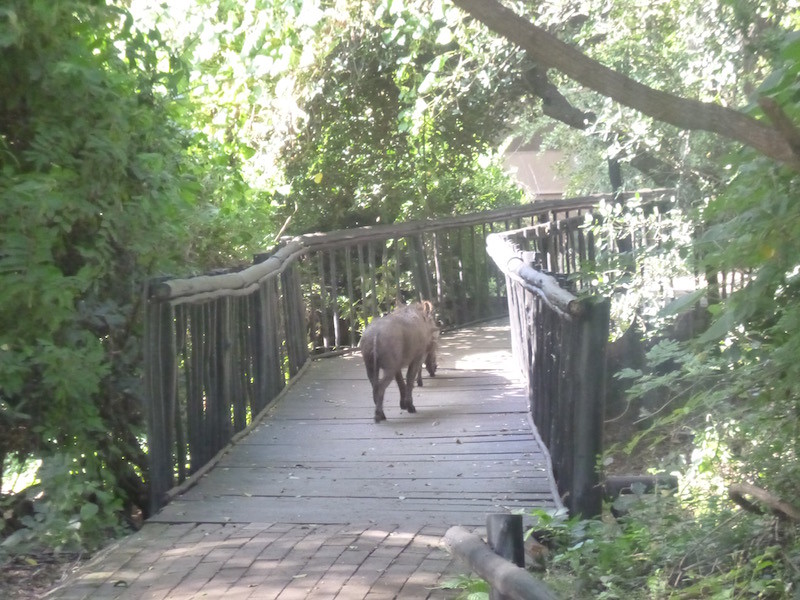