On the last evening at the Isle of Man, we caught the electric tram from Laxey into Douglas and wandered the promenade for a bit.

One big difference between June at home and June on the Isle of Man: it’s 55 degrees F here and damp. Diana doesn’t do cold well.

We rode the electric tram from Laxey to Douglas. I wish I had thought to take a photo of the actual one we rode, because it was Car Number 1, built in 1893. It and Car Number 2 are registered in the Guinness Book of World Records as the oldest trams in the world still in operation on their original lines.

They’ve obviously been restored but are very accurate to their original build.

On the Promenade in Douglas is this life-size bronze statue of the three Gibb brothers, or the Bee Gees. I’ve always thought of them as Australian, but it turns out they were all three born on the Isle of Man.

We caught the last tram back to Laxey and had a few hours sleep before packing our tent and gear at 3:30am Friday morning, as we had to check in for the ferry at 4:30am. At least it wasn’t raining this time, although everything was covered with a heavy dew.

We made it to the ferry and lined up with a couple of hundred other motorcycles. The boarding process was a bit smoother than a week ago, and we were able to grab a couple of seats and settle in before the ferry even left port. Since things were going smoothly, I decided to beat the crowds and get some breakfast.

Then the ferry left port. And things got interesting.

I was still standing in line when we left the harbor for open water. This was my third round trip on the ferry to the Isle of Man, but the first in heavy seas. We were all suddenly grabbing for seatbacks, rails on the walls, other people, anything we could find to remain standing. I made it to the breakfast bar, put the food on the tray, and managed to more or less hold two cups of coffee under the dispenser. Now the real challenge: using both hands to hold the tray, the plate of food, and two cups of coffee while dancing back and forth across the aisle, intermittently running forward between the left- and right-rolls of the ship, trying to end up against a wall rather than in someone’s lap when the ship started rolling the other way. I somehow made it back to our seats intact and without wearing breakfast. By this time Diana was looking a bit green and wasn’t really interested in food any more. I sat down about the time the cabin employees began passing out the barf bags. I noticed a lot of people moving quickly towards the toilets and towards the exit door to the outer rails of the ship.

The seas settled down after the first hour or so, and we arrived in Heysham around 8:30am. Most riders disembarked and headed straight for the motorways to get home. I had other plans. We headed to the Yorkshire Dales to ride a loop that I had found online…some great twisty roads into high meadows and grassy hills, lots of sheep, over Buttertubs Pass and eventually to the Tan Hill Inn, the highest pub in England at 1732 feet above sea level.

It’s hard to concentrate on the roads with this scenery.

Nothing on top of this mountain besides the Tan Hill Inn, Britain’s highest pub. They serve an excellent burger.

From the Tan Hill Inn we rode back down to Hawes and then past the Ribblehead Viaduct to Cragg Hill Farm, a working sheep farm where we camped for the night.

The next morning we were headed to Wales to meet up with our friends Michal and Patrycza and their daughter Roza, from Poland. They had driven their SUV with a pop-up tent on top to Wales to visit another friend and meet up with us. I can’t remember if I’ve told the story about how we met before, so here’s a quick version:

In 2014, before leaving on my first round-the-world ride, I met an Australian couple, Glen and Leeanne. They were riding North America on a Triumph Tiger, and they had invited me to camp with them in Llano, Texas as a way of showing me their gear and setup to give me some ideas for my own trip. While camped on the bank of the Llano River that night, two other motorcycles pulled in and set up camp next to us. The next morning, I noticed the two late arrivals had odd license plates, and I asked where they were from. It turns out Michal and Lukasz were from Poland, and were touring the United States in one-month sessions; each year they would take their vacation time, fly to the States, and pick up their bikes where they had left them the year before. They had been from Chicago to Alaska to Southern California and were now headed to Florida on the third summer of their travels.

There’s a lot more to this story, and I’ll fill in more details in a later post, but this is basically how I met Lukasz and Michal, and later Patrycza (“Pati”), Lukasz’ brother Marcin, and Marcin’s wife Ela.

So, fast-forward back to today. I had another destination in mind and more twisty road riding to do before heading to Wales, so we left Cragg Hill Farm in Horton-in-Ribbelsdale and headed south. I had fully intended to spend a few hours riding the scenic, narrow, twisty backroads of the area, but before I realized it, our GPS had directed me to the M60 motorway and straight towards Manchester. In the end, we did get to ride about ten miles of good road up to the Cat & Fiddle Inn.

The Cat & Fiddle is another “destination” spot for bikers due to the roads leading to it. There are definitely better roads to get there than the way we went, but we did get to enjoy some of it. The place was fully booked this day, so we got some take-away coffee and muffins and stood behind the building and out of the wind with the others. While the Tan Hill Inn is the highest pub in England, the Cat & Fiddle, which is about 33 feet lower in elevation, is the highest distillery in England.

The wind was blowing fairly steady and it was about 55 degrees Fahrenheit, but seemed colder. We headed back down to the motorway and continued on toward Snowdonia National Park in Wales. This is a beautiful area, with lush green hills, some covered in nothing but grass, while other areas are heavily forested and with clear streams. We met up with Michal, Pati and Roza at Bryn Tyrch Campsite outside Capel Curig in Betws-y-Coed. (Yes, I’m listing all these names because the Welsh language looks and sounds so strange to us. All of the signs here are in Welsh first, and English second, and there is no similarity to any of the words.)

Our campsite the first night in Wales with the Soroko family.

In case you were wondering about the wording on Michal’s slide-out kitchen drawer in the back of his SUV, Michal, Lukasz, and Marcin are part of a well-known AC/DC tribute band in Poland called Jary.

The next morning we rode a couple of miles up the road to a staging point to hike up Mount Snowdon. You know your country has a serious hiking/trekking problem when the parking lots in the middle of nowhere require advance reservations. I dropped Diana off with Pati and Roza and followed Michal back down to a lower point to find a place to park his SUV, then ferried him back up to the staging area where we were able to find enough room to tuck the bike into a parking space that wasn’t really a parking space.

Looking down the valley on our hike up the hill to Snowdon.

The trail is mostly a climb over boulder steps, and 5-year-old Roza handled it with ease. We hiked a little over two hours up, had lunch, and headed back. On the way down, hikers headed up were congratulating Roza on a job well done. She’s pretty amazing for her age. Michal and Pati spend a lot of time with her outdoors, hiking and riding bicycles.

Five year olds tend to have a lot of energy, so a little off-trail extra rock climbing is no big deal.

This was our first time to meet Roza, or Rosie as she’s called in English. Michal spends a lot of time speaking to her in English, and Pati in Polish, and she responds likewise. She learned much of her English by watching Peppa Pig on television, so she speaks English with a British accent, though it wasn’t as noticeable while we were together as it seemed a year ago when we were video-chatting on Skype. Michal says that’s because she’s now watching Paw Patrol. This was Rosie’s first time interacting with native-English speakers, and Michal and Pati weren’t sure how she would do. We were concerned that she might be too shy around us to feel comfortable speaking English. It turns out none of us had anything to worry about; she took right to us and her English was great. 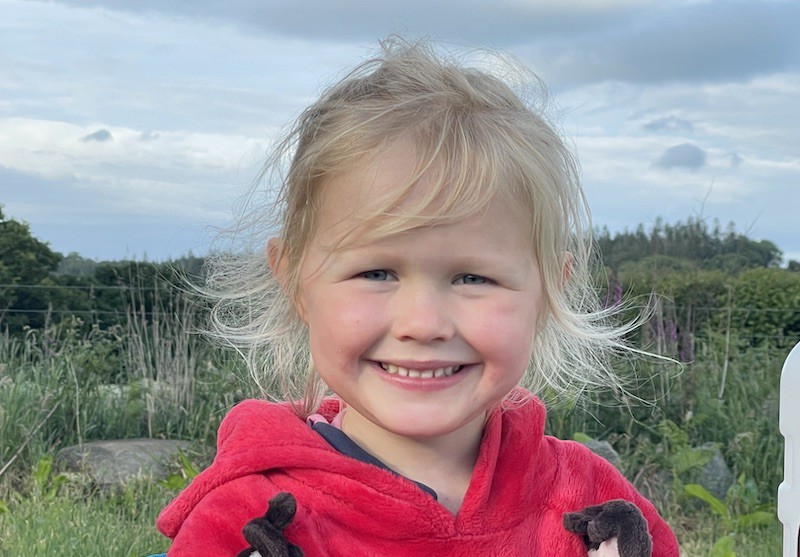 One thought on “Tan Hill, The Cat & Fiddle, and Snowdonia”