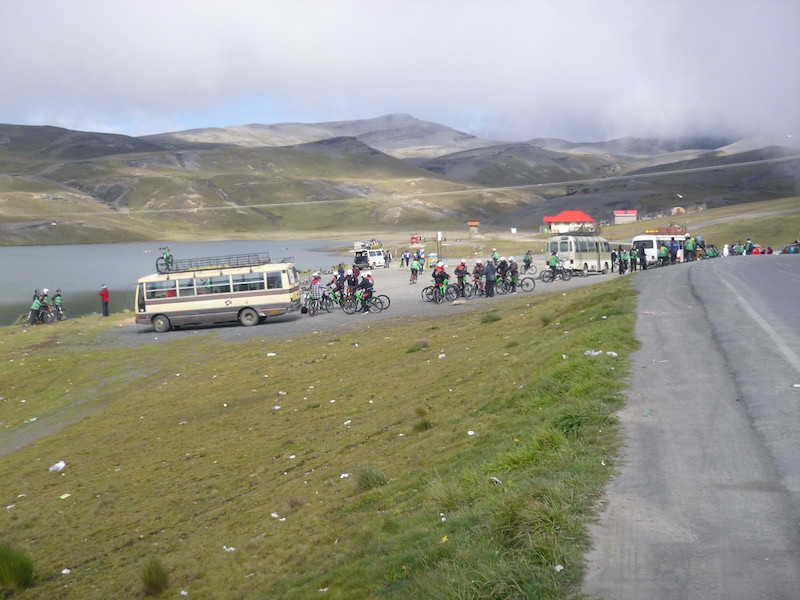 Bicycle staging area at the top of the mountain, several miles before the turn-off to the Bolivian Death Road.

“OMG, you guys, I signed up for this awesome thing. It’s called ‘The Bolivian Death Road’. Have you heard about it? It’s SOOOOO cool! Early in the morning, our driver, Fernando, picks us up at our hotel in a bus with, like, twenty five bicycles or something on top of it. Then we start up the mountain outside of La Paz. OMG you guys, Fernando is cray-cray. He is driving like NASCAR or something, like passing all these other vans with like a bazillion bicycles on top of them. I almost spilled my latte. Then at the top of the mountain they stop and unload the bikes and fed us pastries and stuff. OMG you guys. Biff and I both almost gagged. I mean, really? HEL-LO!!! Haven’t these people ever heard of gluten-free? So then they put this, like, really unflattering helmet on me, and we take off down the mountain on this super-scary road (which I later found out was the paved new super-highway that like totally bypasses the Death Road. But, Whatever!) And then — wait, What? You want me to ride down that?!? Uh-uh. NO. WAY. YOU are cray-cray. Fernando, take me back to the Ritz Carlton. I have a 2pm massage and pedi.”

That’s pretty much today’s Bolivian Death Road as far as I can tell from what I saw. I had read so much about the North Yungas Road over the years and it was high on my list of must do’s. I have absolutely no doubt that back when this was the main road between Coroico and La Paz, this was a dangerous road to travel. Many people died here, and occasionally some still do. It’s not the road’s fault. The road is wide enough to negotiate, so long as you aren’t passing a bus or a truck (which, by the way, no longer use this road as there is a beautiful paved two-lane highway just north of here). Drive responsibly, with some respect for the circumstances, and you’ll be fine. Drive (or ride a motorcycle or bicycle) like an idiot and the consequences here will be severe.

Since around 2006, when the new highway opened, the “Death Road” has become mostly just a tourism venue. Vans and buses haul hundreds of tourists and mountain bikes a day to the top of the mountain, where they can coast down the highway to the turnoff to North Yungas Road, then take the gravel road to near the town of Coroico, where they are picked up and returned to La Paz. In return, like my volcano-boarding experience in Leon, Nicaragua, you get the t-shirt for bragging rights. Nothing says “Adventure Hero” like a t-shirt with a bicycle and the words “Death Road” on it.

Back when this was a heavily driven road, the “Keep Left” rule was instated. This allows the driver to always be on the “cliff side” of the road, so he can better judge where his outside wheels are in relation to the drop-off. The rule continues today.

The first six miles or so of the road are absolutely spectacular. Often in the clouds, the jungle-like setting adds to the spectacular waterfalls that fall onto and over the road in many places. The road is quite narrow, with only a few well-placed guardrails. A mistake here will most certainly prove fatal. 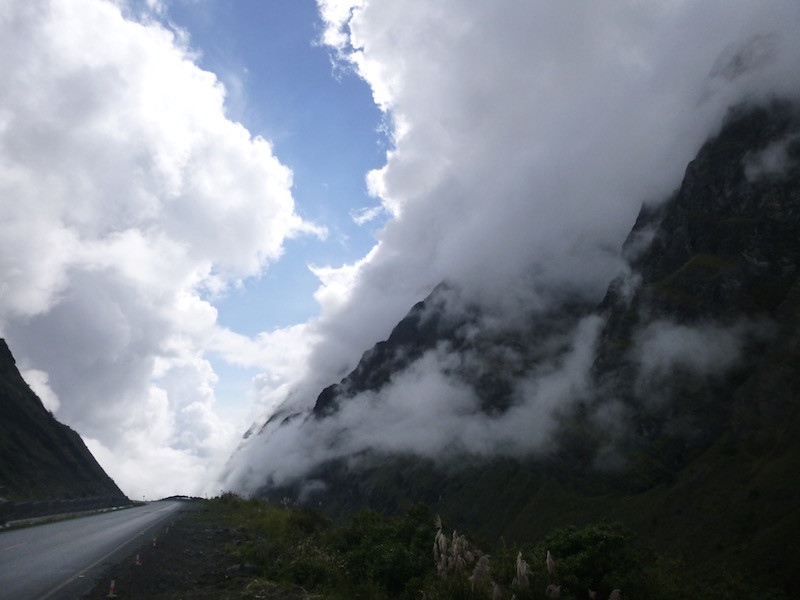 The highway on the way to North Yungas. Cloud formations were pretty phenomenal.

Near the beginning (top) of the “Death Road”

Hard to see here, but there is a series of water cascading down onto the road here, landing just about in the middle. You can ride inside or outside of the waterfalls.

Near the top I ran across Barbara Kennedi and her companion Peter, on KTM 1190 Adventure R models. Barbara is a KTM employee in Austria, and she and Peter are riding around the world in stages. They are doing a similar route right now to mine — to Ushuaia then Buenos Aires. But they will ship to Dakar when I ship to Cape Town.

There is virtually no traffic on this road, which of course is good not only for the mountain bikers but for me as well. It doesn’t take long to complete the ride and return to La Paz in the same day. I went from clouds, fog, cold and rain at the top, to sun, hot and dry at the bottom, back through fog and rain across the top and once again into heat as I passed through La Paz to the Colibri Camping spot that I will call home for another night. In my opinion, riding through traffic in La Paz is more dangerous than the “Death Road”. I was a bit underwhelmed at the road and it’s hype. But I would still do it again if I happened to be in La Paz and had access to a motorcycle. At least the first six miles or so. And my advice if you are considering doing this road: be sure you turn off the highway and onto North Yungas before 10am. After that, and you’ll be picking your way through hundreds of mountain bikes.

Which gives me an idea for a new business venture. I’m going to find the road in Austin where the most bicyclists have been killed. Then I’m gonna market the heck out of it as “The World’s Most Dangerous Road on a Mountainbike” (okay, maybe Texas’ most dangerous. Okay, maybe Austin’s most dangerous. Wait, where’d the hype go?). Then I’m gonna charge people a ridiculous amount of money to ride a mountain bike down the road, and give them a t-shirt if/when they survive. Yeah, I know, it’ll never work in the States. Because there’s nobody to sue in Bolivia.

Just before La Paz, I have my first encounter with being refused fuel. Bolivia laws require fuel sellers to complete a ridiculous amount of paperwork when selling fuel to foreigners, including inputting passport number, name and country of residence information, as well as completing a detailed receipt (or two, in some cases). In addition, there is a “Foreigner” price and a “Boliviano” price for fuel. Yesterday, I paid just under five dollars a gallon, where the locals-only price is around $1.99, and got to experience the hassles the attendants encounter when following the rules; by the time my purchase was complete, there was a line of cars out to the street, waiting. No such luck today. The attendant takes one look at my Texas license plate and refuses to sell me fuel. I ask if he will sell me fuel without a receipt (“sin factura”) at the higher rate. Nope. So, off I go in search of fuel. Five hundred feet down the road, I run out of gas. Fortunately, I have fuel in the spare can on the back of the bike, but I still need to find fuel to replace it.

Headed toward Cochabamba and Sucre in the morning…

4 thoughts on “The Bolivian “Death Road””