As I finished packing to leave the Backpacker Hostel in Agulhas, a gentleman approached me and asked some of the usual questions: where was I headed, where did I come from (which typically starts a much longer conversation when they realize that i rode 35,000 kilometers on a 250 to get here). Within a few minutes, his family joined him; it’s often the “I sold my house, my car, and most of my belongings before leaving on this trip” that gets the wife interested. Suddenly, it’s not just about motorcycles any more. Once again, South African kindness prevailed, and before leaving, Mrs. Charda gave me a slip of paper with their phone numbers on it and asked me to call them when I returned to Cape Town and she would cook an Indian dinner for me. 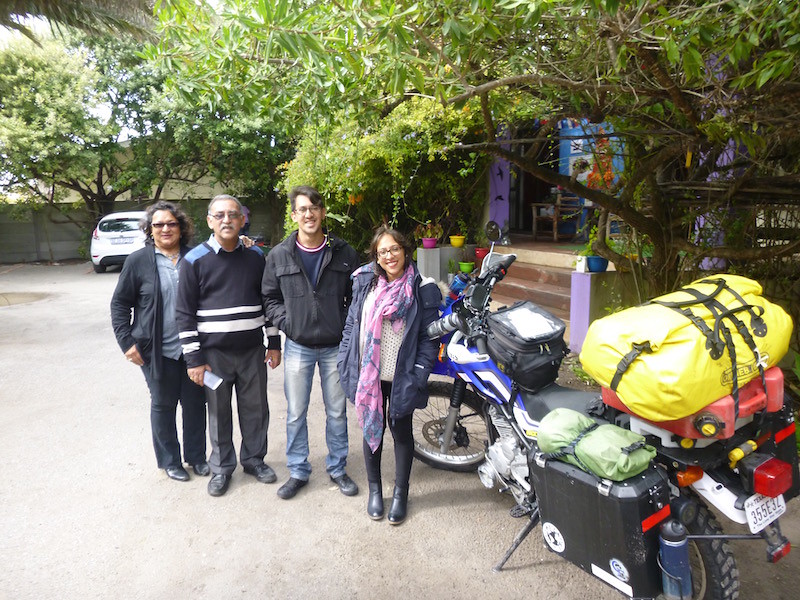 Nearly the entire day was spent on major highways, which I hate. But the N2 highway is the coast road along this section of the Garden Route, so I had no real choice. The speed limit here is 120 kph (about 74 mph) in many places, and that’s faster than the XT likes to go. I felt bad pushing it at 100 kph for any extended period, but with all of the Easter traffic returning home today, I had to get out of the way. This is the first time of my entire trip that I’ve felt I was going slower than the majority of the traffic, and it’s an indication that I’m not on the roads I want or like to be on. In South Africa, it’s common to pull onto the shoulder to let faster traffic pass (much like in Texas), and here nearly every car that passed me, including a police car, turned their flashers on for two or three flashes after passing as a “thank you”.

Speaking of road customs, I hadn’t really considered it until today, but motorcyclists here have a bit of a difficulty with being friendly. In the States, it’s very common for two bikers to “wave” at each other when they pass on the highway. This is done by extending the left hand out to the side and down slightly. In South Africa, that doesn’t work so well, since you’re on the opposite side of the road and the “wave” is on the wrong side. Of course, you can’t just take your right hand off the throttle to wave (unless you have cruise control, which is a small percentage of bikers). In France and Italy, when I would pass other bikes, they would hang a foot off the peg as a means of waving without removing a hand from the bars. Here in South Africa, they do this “head nod” thing: they kind of flop their head to the right side, like waving your head instead of your hand. It looks odd at first, but I caught on after a while.

After a relatively long (450 km) day on the highway, I arrived at Natures Valley National Park, just outside of Plettenberg Bay. It’s a fairly small camping area, but nice, filled with trees, and baboons apparently.

Sign posted on the door to the kitchen area at the campground.

Yep. Definitely not in Kansas…

I didn’t see any, but I heard some odd noises during the night. My food stays locked in the panniers while camping here, just in case.

7 thoughts on “The Garden Route”