You can find details on the bike I’m riding under the heading “The Gear”.

Which Bike is the “Right Bike” for a Round-the-World Trip?

Answering this question is kind of like answering your wife when she asks “Does this dress make me look fat?” It can be a fine line. Everyone has a different opinion, and there are thousands of posts in various forums discussing the virtues of one bike over another (and whether or not your wife looks fat in that dress). So I’ll save you a lot of reading right now and tell you ahead of time that I’m not going to wrap this up by telling you that the only bike you should ride is a BMW GS, or a KTM 690, or a KLR 650, or any bike at all, for that matter. No, more important than that: this is about how to determine what is the right bike for you and your trip.

So, to begin with, assume that you were given two motorcycles: a Yamaha Super Tenere, and a Yamaha XT250. 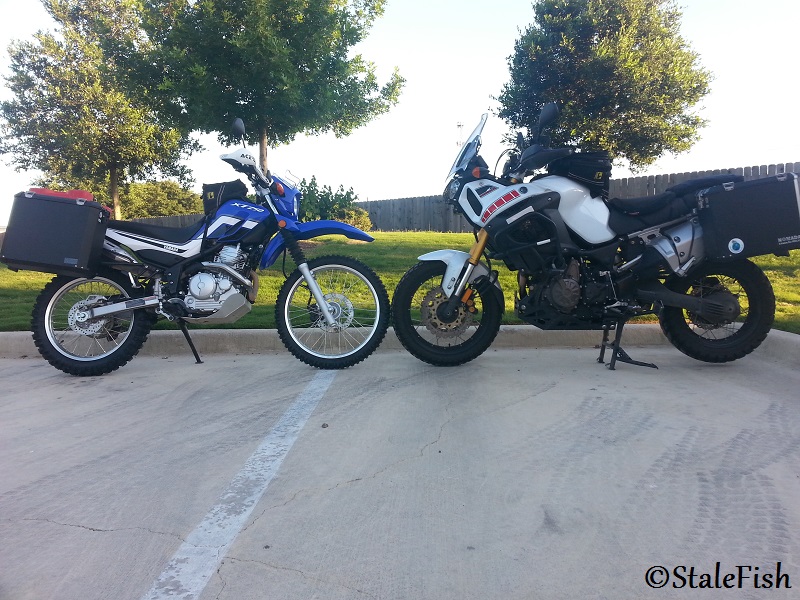 You had to choose one of these to ride off into the sunset on a long, personal journey. Which would it be?

Obviously these are two motorcycles on very different ends of the scale in terms of displacement, weight, power, price, etc.

Before deciding which bike to take, you need to decide what your goals are. Among other things, you should consider:

All of these are important considerations before narrowing your selection.

Back to the Super Tenere and the XT250: there are pros and cons to both of these bikes, depending on what your definition and goals are. For example:

The Super Tenere is relatively expensive. The price not only affects your up-front cash outlay, but can factor into the cost of insurances, certain import fees, carnet cost, etc.

The Super Tenere has ABS, Traction Control, liquid cooling, hydraulic clutch, and electronic everything. All of this is nice, and has been proven reliable. But if you’re in Panama (or Botswana) with a major electronic bug, it’s not always the fastest and easiest thing to troubleshoot. The XT250 is fuel injected since 2013, but it’s a very simple single cylinder system; it’s also still air-cooled and simple to work on. And while Yamaha doesn’t sell the XT250 itself in all countries, it does sell various models using the same engine in a lot of places, so parts are easier to come by.

Very few people would choose the XT250 over the Super Tenere for 2-up touring. Even solo, at 18hp, the XT250 is not going to zip around all of those soot-belching trucks in South America, or fly up and over 15,000 foot mountain ranges (though I’ve had mine to over 12,000 feet already, and it still pulls just fine — another advantage to fuel injection, even on an otherwise simple motorcycle).

All of that being said, there are people out there riding 50cc and 90cc bikes on long trips across the world, and loving it. (See Ed March’s C90 Adventures for example.)

If you open your mind to the idea of small-bike touring, you find that there are certain adjustments you make that actually turn into benefits: on a small bike, you travel slower. You take more back roads. You see more. You stop more often, which allows you to meet more people. You choose different routes, and perhaps different places to stay overnight, because you can get the small bike up that flight of stairs and into the lobby whereas the big bike might not fit, or is tricky to maneuver.

When I began planning my trip, I felt the Super Tenere was the right bike for me. I had previously ridden a BMW GSA to Alaska and back 2-up, and around Europe, and enjoyed the versatility of it. I had toured all across the U.S. and Canada on a couple of Yamaha Ventures, and commuted to work on an FJR1300. With my off-road skills and my comfort with big bikes, the Super Tenere made sense. Then I started thinking about where I would be going, and whether I needed all that bike. It began to feel like taking a Ford Excursion to a VW rally. Based on my definition of a round-the-world trip, and my goals, how much would I really use the features of the XTZ1200? I started considering a 650cc motorcycle. Ultimately, this would be a front-runner for my type of trip. But I ended up choosing the 250 simply because Yamaha doesn’t offer a mid-size adventure bike in the U.S. market (see About Me). After putting several thousand miles on the little 250, and tweaking my attitude to match the bike’s power and size, I’m enjoying it very much, and feel like even the 650 would be too big for some of the places I want to go (though the power would be nice at times).

By the way, while we’re discussing fuel, I’ve had people comment that my fuel tank on the XT250 is too small to be a serious long-distance bike. Yes, it’s not a 9 gallon Safari tank. But between my 2.7 gallon tank, and my 1.75 gallon Rotopax can, I can go 70 miles farther than the stock 6 gallon tank on the Super Tenere. Fuel efficiency should not be overlooked.

If I could have a “magic” switch on the handlebars that could switch between the Super Tenere for those long stretches of highway and the XT250 for the loose gravel, muddy, or sandy two-track (and single track), I’d certainly choose it. But for my version of an around-the-world trip, the 250 came out on top, and the switch I had to flip was in my head: slow down, do shorter days, enjoy the scenery and people.

Unlike most people, I chose to put aluminum panniers on both my Super Tenere and my XT250. I’ve always traveled with hard cases, and I like the extra comfort of being able to lock the cases and walk somewhere. On the other hand, I chose to not install a hard topcase. Some say that the hard panniers can increase the chance of injury in a spill. Time will tell if this is a wise choice, but for now I’m happy with being able to walk into a restaurant or border crossing office without worrying about my bags being rifled through. Traveling with another person somewhat relieves this problem, as one can stay with the bikes while the other goes into customs, or shopping, or whatever.

Some people choose to have the best of both worlds, and actually keep a different motorcycle in different parts of the world: a CRF250 in Thailand and a BMW in Europe, for example. Or choose to rent a bike in certain areas that fits their intentions better than what they have. If this fits your budget, by all means give it some serious consideration; compare shipping costs to rental or purchase in other countries — it may make more sense economically. If you decide to buy overseas, be absolutely sure that you can get it titled and licensed in your name with an actual document in hand before you try to cross any borders; some places may take longer to get a title than you have for your trip.

To sum up, here’s what I think is the most important advice I can give you about choosing the “right bike” to ride “around the world”: don’t take for granted that some guy you’ve never met, sitting at a computer in some town you’ve never been to, who says he’s been riding all his life (but has a thousand posts on some forum because he’s too busy sitting on his butt at a computer to ride) knows more than you do about your trip and your needs. Make a list of your goals, really think about how you plan to do your trip and where you want to go. This will help point you to the right motorcycle. Make friends with someone who has one, if possible. Then take a few rides on one.  Spend a weekend on it. Then go back and re-read your list and see if you’re happy with your choice. If not, adjust. But above all, get off the damn computer and get out and do it!