Today we did a typical tourist day. We walked the streets of Ljubljana, sightseeing and eating our way around. It rained again overnight, but stopped early morning, so we had perfect weather for just walking the town.

Our small studio apartment is located in the center of Ljubljana, and easily walkable to most all of the normal tourist activities. We began with a walk to the Central Market, crossing over the Dragon Bridge. 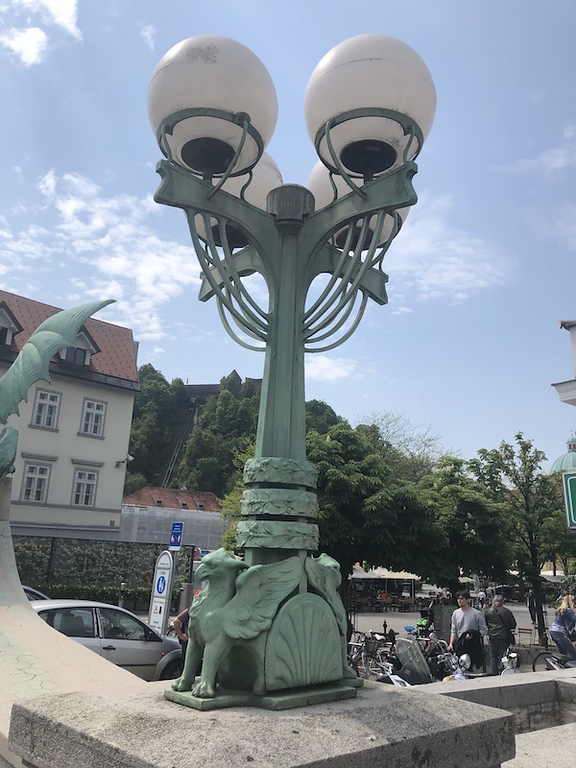 All four corners of the Dragon Bridge have large dragons overlooking them, and even the lamp posts on the bridge have small dragons on them. One local legend says that when a virgin crosses the bridge, the dragons wag their tails. I didn’t see any tails wagging while we were there. Hmmm…
The dragons from the bridge, which opened in 1901, have become a symbol of the city.

Being a Monday, the open air market wasn’t as busy as it likely is on other mornings and probably even more so on weekends, but we enjoyed looking at all the fresh produce, and then stopped at a bakery for a pastry and coffee, before heading to the next two bridges. 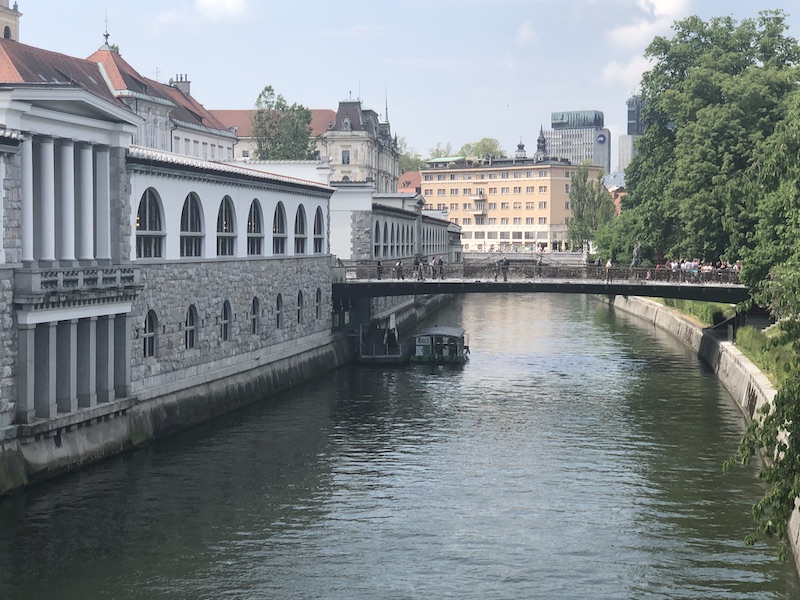 The Butchers’ Bridge, as seen from the Dragon Bridge. On the left is the Central Market.

The Butchers’ Bridge (named, I believe, because the meat market is directly next to the bridge) is one of those bridges that lovers put padlocks on the cables. There are thousands of padlocks on the rails of this bridge.

The Triple Bridge, named because — wait for it — there are three bridges side-by-side that cross the Ljubljanica River into Preseren Square (which is actually circular).

Looking down the river from the Triple Bridge

From Preseren Square we walked past the University and down to Congress Square. 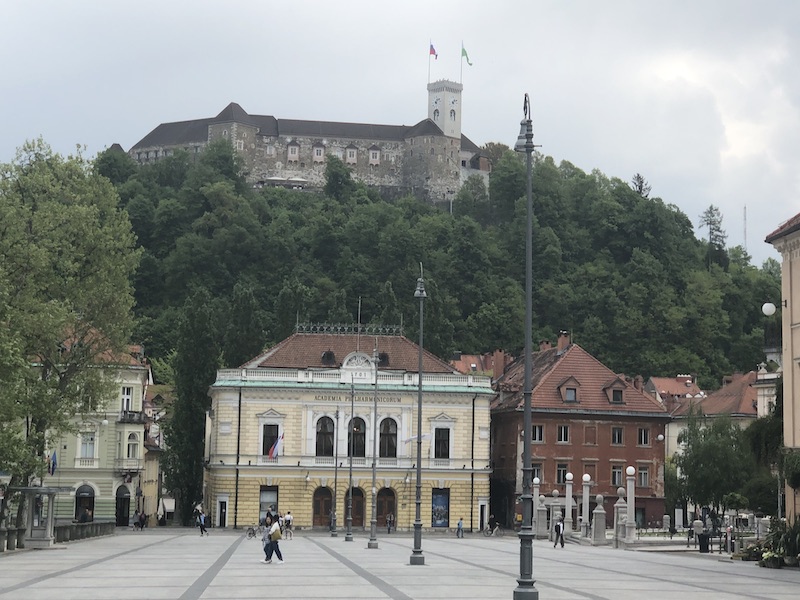 Looking over the Philharmonic Orchestra building from Congress Square, up to the Ljubljana Castle

Congress Square has been known at different points in its’ history as Revolution Square (communist period) and later Liberation Square before returning to its’ original name of Congress Square or Kongresni Trg in Slovene.

From Congress Square we walked back around past the Central Market to the funicular which took us up to Ljubljana Castle.

Looking out over the city from atop the clock tower of the castle.

At the tip of my finger is our studio apartment that we rented for two nights. 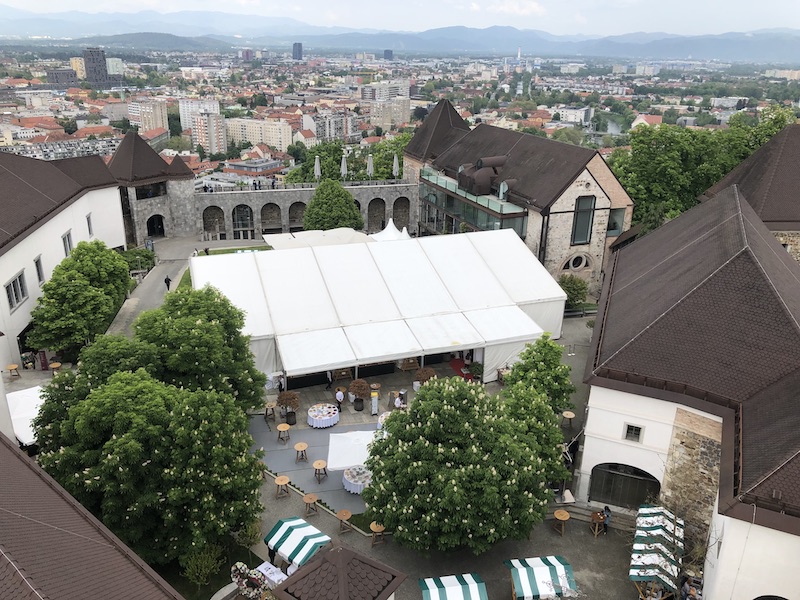 There was a large, very ritzy event happening in the courtyard of the castle while we were there. No idea who or what, but the prepared food and wine everywhere was incredible.

After a trip to the grocery store to replenish for the coming days camping, we walked to dinner at Vodnikov Hram, a traditional Slovene restaurant. With all the walking we had done today, our eyes were definitely bigger than our stomachs, and we ordered a traditional Slovene platter for two. Which turned out to be big enough for four easily. It had two different kinds of sausages (four total), two breaded chicken cutlets, sour cabbage, roasted potatoes, grilled vegetables, fries, sour cream rolls, and two large bowls of soup.

As hard as we tried, we couldn’t finish it off, and ended up taking the sausages home. We’ll pack them along for another meal or two. After dinner, we were served Viljamovka, which coincidentally is Williams (Viljam), or Williams Pear Brandy. The Williams Pear is the most commonly grown variety of pear in countries outside of Asia. In the U.S., it’s known as the Bartlett Pear. I don’t know who Bartlett is, or why he stole my pear.

We went way over our budget playing tourist the past couple of days, but it was enjoyable and we’re sort of in the tourist mode for this part of the trip. Even so, we have to watch our budget, so it’s back to camping for the next couple of nights.

One thought on “The Tourist Thing”