Plettenberg Bay, or “Plett” as the locals call it, and the surrounding area is a place I could spend a lot more time. Like a month or so. At least. From the beautiful lush coast landscape, including hiking trails and National Parks that run along the beach, to the extensive wildlife, including the Birds of Eden Bird Sanctuary (the second largest aviary in the world; so big it doesn’t really feel like you are in any type of enclosure), a Wolf Sanctuary, a Lion Sanctuary, an Elephant Sanctuary, a Leopard Sanctuary, and more. There’s also the adventure sports here: the Bouji?? Bungy Bridge (highest bungy bridge in the world), paragliding, kite surfing, shark diving, kayaking, surfing, etc.

World’s highest bungee bridge at just over 700 feet. Uh, maybe next time. Or not.

I will definitely return to Plett. I am feeling guilty that I don’t have enough time to see and do everything I want to experience here. But unfortunately I’ve created a bit of a schedule for myself that I am going to have to somewhat stick to. I don’t have a hard-and-fast daily schedule, but I have a limited amount of time to cover this continent and the next, while staying within the preferable weather window.

Given all of the choices in the Plettenberg/Natures Valley area, it was hard to decide what to do. But then as I was riding down the road, I saw this guy in the field with an elephant…

The elephant just grabbed my hand with her trunk, and we walked along like that….

Ok, so maybe it wasn’t quite like that. I stopped at the Elephant Sanctuary, where not only did I get to walk trunk-in-hand with the elephants, but I learned a tremendous amount about elephants. For example, one big difference between an Indian Elephant and an African Elephant is the size of their ears. African elephants have larger ears. They use their ears as radiators and fans for body temperature control. The larger ears have more blood flowing through them to help cool it, and they flap their ears to help stay cool. They also roll around in the mud as a natural sunblock. 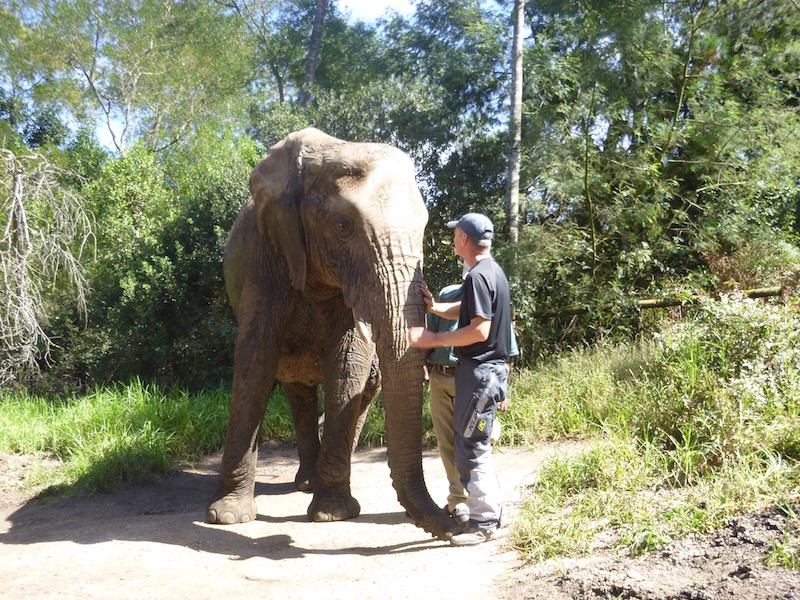 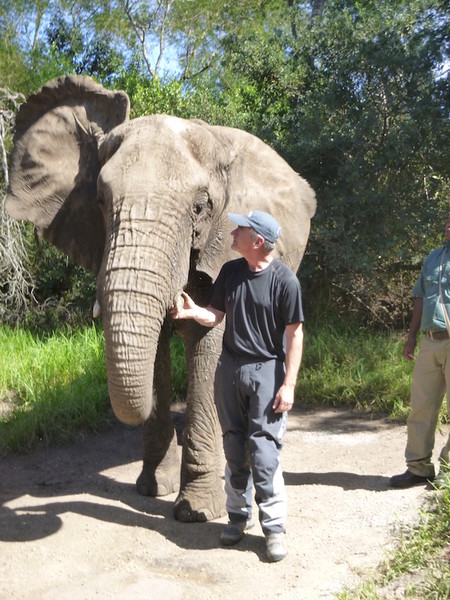 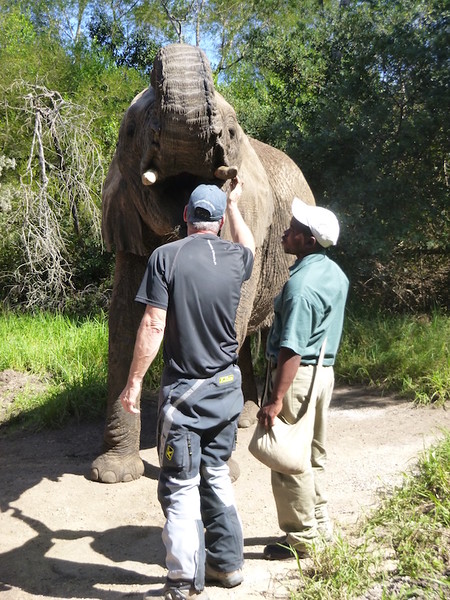 Did you know elephants only have four teeth: all molars, for chewing. But they go through six sets of these teeth in a lifetime.

Also, elephants’ front feet are larger and round, because they carry more weight on their front feet than the rear.

Two of the elephants I met at the sanctuary had lost the tip of their trunks. Normally an elephant has a couple of projections at the tip of its’ trunk that it uses like fingers to grab and pull grass up to eat. The two elephants that had lost this part of their trunks (the handlers at the sanctuary thought it had probably happened in a snare trap) had learned to use their feet to kick at the ground and tear the grass up before eating it.

After leaving the elephant sanctuary, I headed inland, over the Outeniqua Pass towards Oudtshoorn (“Ostrich Capitol of the World”) and the Klein Karoo, or Little Karoo.  Once through the pass, the scenery quickly changed from the lush green coastal landscape to arid semi-desert. At Oudtshoorn I turned back west on Route 62, which is South Africa’s version of our Route 66, and much of it looks like Route 66 through New Mexico or Arizona: red rock bluffs, high desert scrub, and a long two-lane highway.

I stopped in the tiny town of Calitzdorp for the night. This town is apparently famous for its’ Port wines, though I didn’t see nearly as many vineyards in this section as I did near Franschhoek or even later along Route 62. Of the approximately 4,500 residents, nearly 95 percent speak Afrikaans as a first language; only three percent speak English as a first language

I camped at the Station Inn campground, where Cheryl and Michael have converted the old Calitzdorp railroad stop into a campground and pub.

I entered the coordinates for Calitzdorp into my GPS and then rode until I saw the pin.

Yes, the trolley cars function, and you can take one and go to the end of the property on it.

I was the only one at the campground this night.

Across the tracks from the old ticket office is an old warehouse that Cheryl and Michael have turned into a pub and party hall.

I was the only camper, though several locals showed up to play darts at the pub, and I spent some time talking with the owners about my travels, their travels (Michael has a BMW 650), and other travelers who have come through.

The next morning I continued northwest on Route 62, and once again the winds picked up, causing me to fight for lane position again. 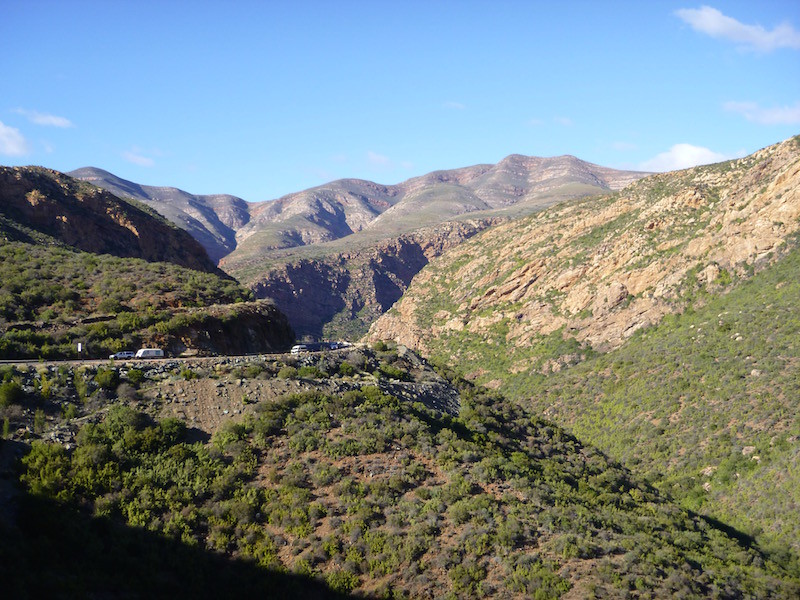 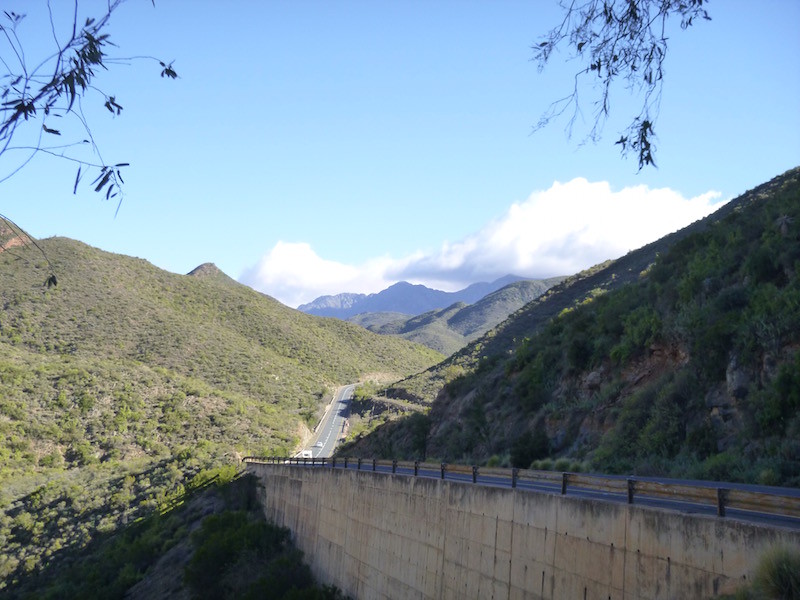 By the time I reached N2 (the main highway to Cape Town), I was exhausted and my back, shoulders and neck were aching from straining to hold the bike on course. I had one more pass to cross before I would hopefully be out of the strong winds and back on the Cape Town side of the weather. Near the top of this pass is the Hugenot Tunnel, a 4 km long tunnel through the mountain. 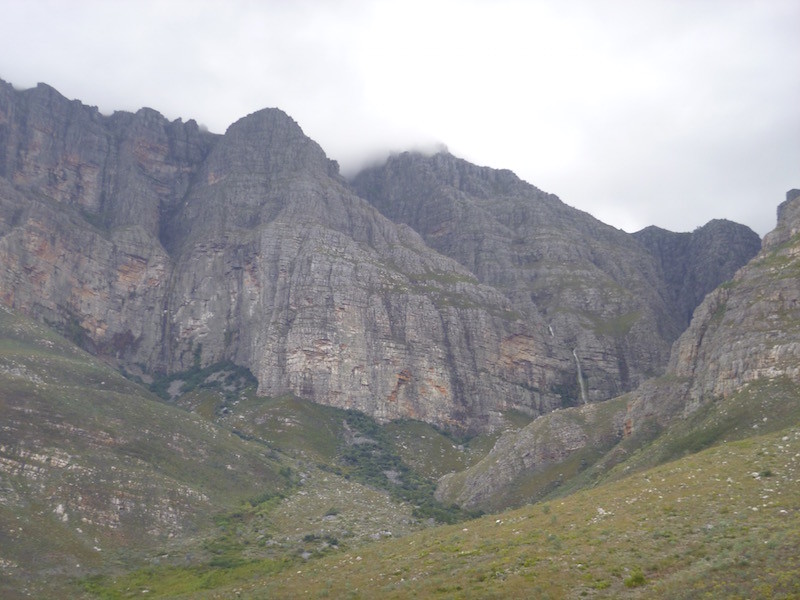 Just before the Hugenot Tunnel

As I had hoped, the wind on the other side of the tunnel was just a slight breeze and things returned to a more relaxed ride, even though the pace was still much faster than I would have liked.

On into Cape Town for the night, with some bike maintenance planned for tomorrow…

One thought on “They Never Forget…”