I was planning to go to Tikal today — large Mayan ruins north of Flores. However, having seen Teotihuacan in Mexico and reading all about Tikal, as exciting as they sounded, I had another plan.

About 12 miles north of Tikal via a dirt road behind a guarded gate, is another set of ruins called Uaxactun (pronounced “Wash-Ock-Tun”; sounds a lot like Washington). These ruins are much harder to access, and much less visited. But I wanted to give it a shot. As far as tourist attractions go, I tend to aim for the ones that others don’t visit. I’m not a fan of crowds. And today I got what I wanted, and more.

I rode to Tikal first, which is about 35 miles north of Flores. At the entrance to the park, you pay an entrance fee and receive a ticket. The road is another six or seven miles long to where the actual parking for the Tikal ruins is located. Two guards at the entrance told me that the speed limit for the rest of the road was 40 kmh or 25mph, because “there are pumas and jaguars and other wildlife here.” I wasn’t sure if that meant I should slow down in case one runs out in the road, so I don’t hit it, or if it meant the wildlife is hungry, and I should slow down to give it a chance to catch dinner.

As I headed toward Tikal, the road signs made me feel like I was part of some child’s twisted “See-N-Say” game: 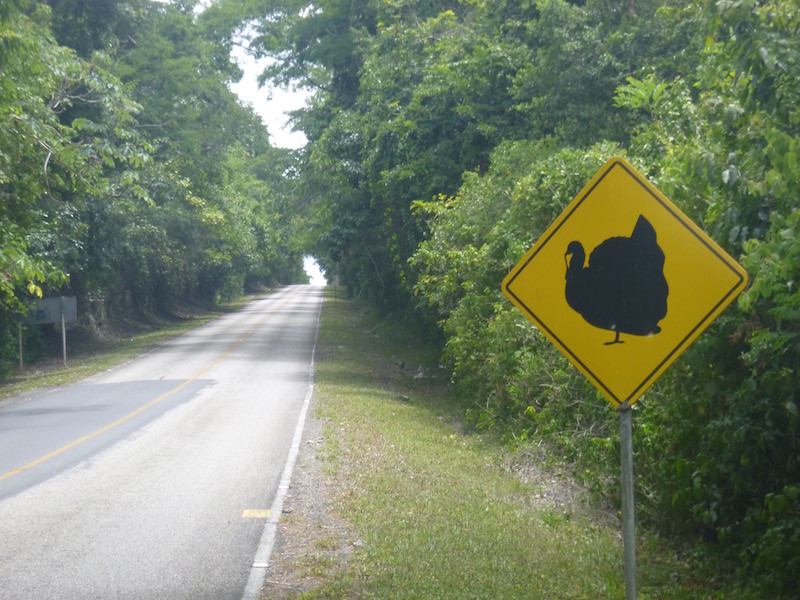 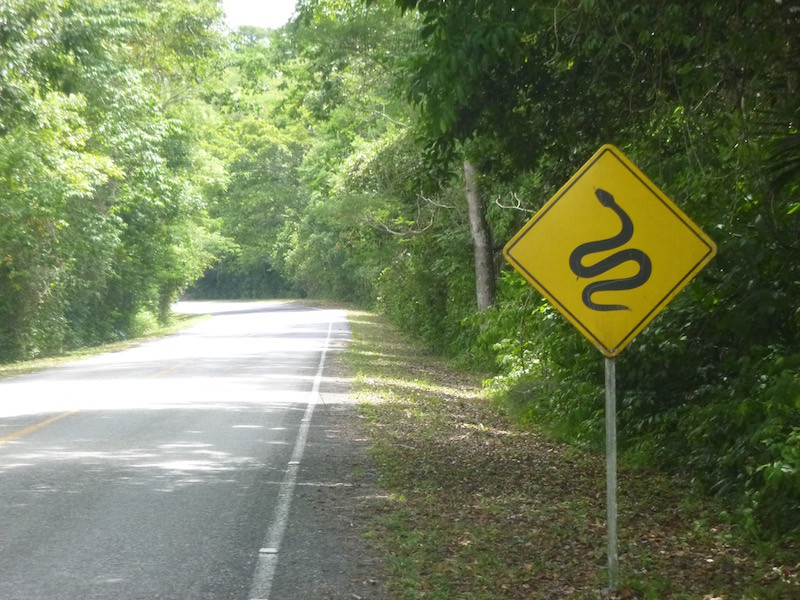 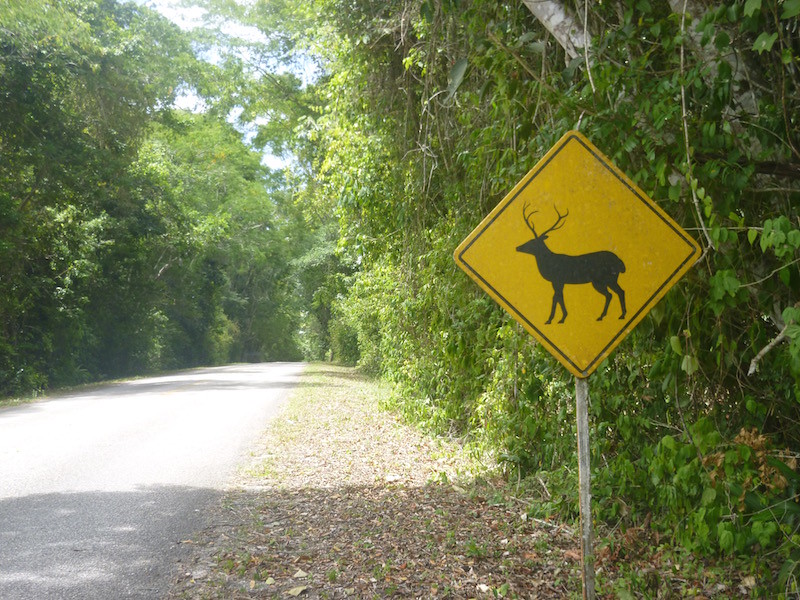 The deer goes, well, deer don’t really have a sound. They snort when they want to alert the rest of the deer to trouble. I guess that counts.

The — what is that? An aardvark? What sound does an aardvark make? 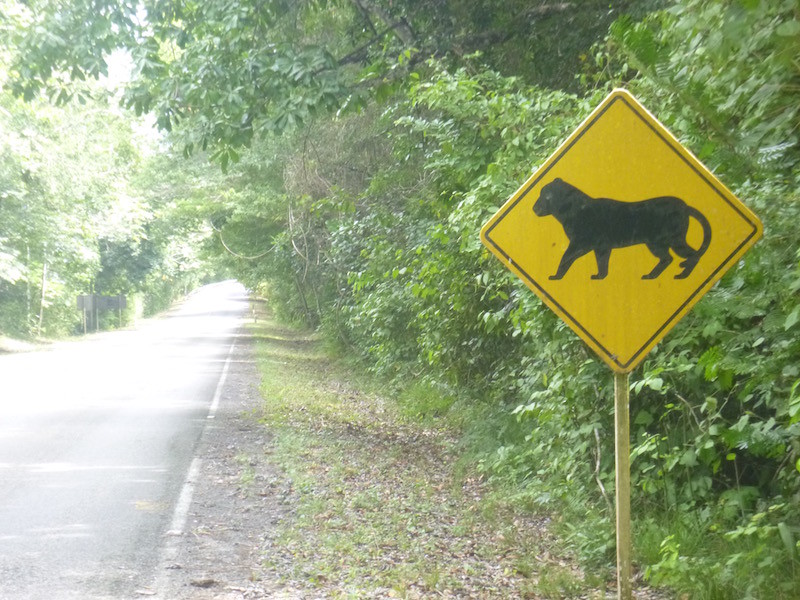 What the heck is THAT?!? A cat’s head on an orangutan’s body?? If that’s a puma, I don’t want anything to do with THAT. And the only reason I’d want to know what sound it makes is so I can run the other way if I hear it.

I got to the parking area for Tikal, and decided I would ask about going to Uaxactun. I found the administration building hidden behind some buildings that looked like housing for the workers.

“Hola. Puedo montar mi moto a Uaxactun?” (Hello. Can I ride my motorcycle to Uaxactun?).

Short pause. Then the guy hands me a form to fill out. It’s a permit to allow me to ride to Uaxactun. Woo Hoo! I’m in. It asks very little: name, nationality, license plate number. Probably to match the body with the bike after the puma attack.

I fill the form out and he hands it to me. That’s it. No fee. No hassle. I go back to my bike, and ride up to the guard at the gate. I show him my permit and he opens the gate. I am now on my own private 12 mile ride through the jungle. And it’s awesome.

No traffic, no buses, no tourists. Not a soul. Except an aardvark. That’s it.

Forty five minutes later I pop out into an open clearing. This used to be an airstrip, back in the 50s when the archaeologists were exploring this site. Now it’s a tiny rural village. The locals look at me like I am a very rare site, and I think they are right. I ask one where the ruins are, and he points up a rough track up the hill. I climb for a quarter mile or so, and then, I’m there.

And I am literally the only one there. No workers. No locals. No tourists. Nada. I am alone with my own private Mayan ruins, and I have ridden right up to within 100 feet of them. This is nothing short of amazing. 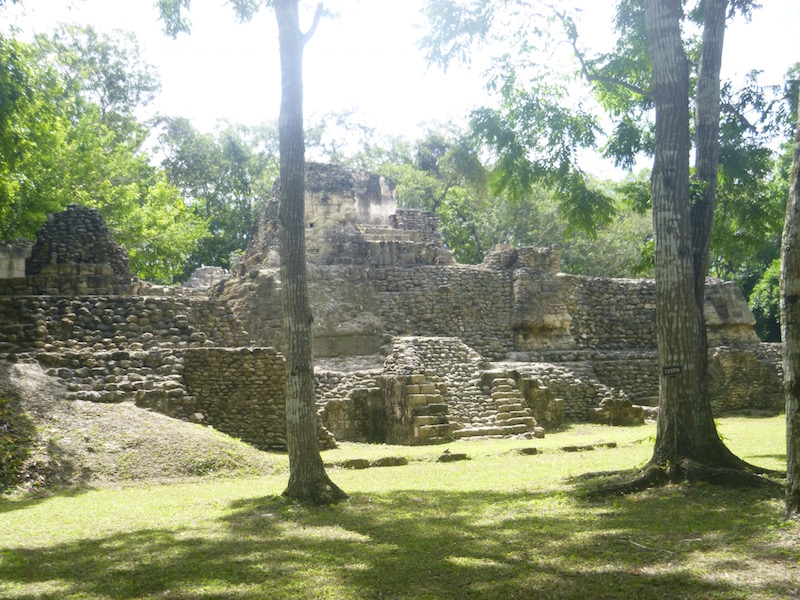 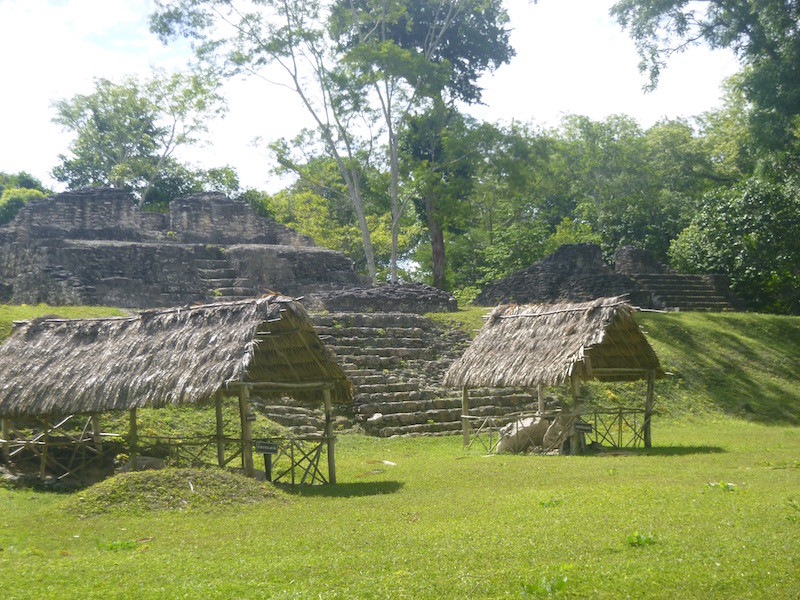 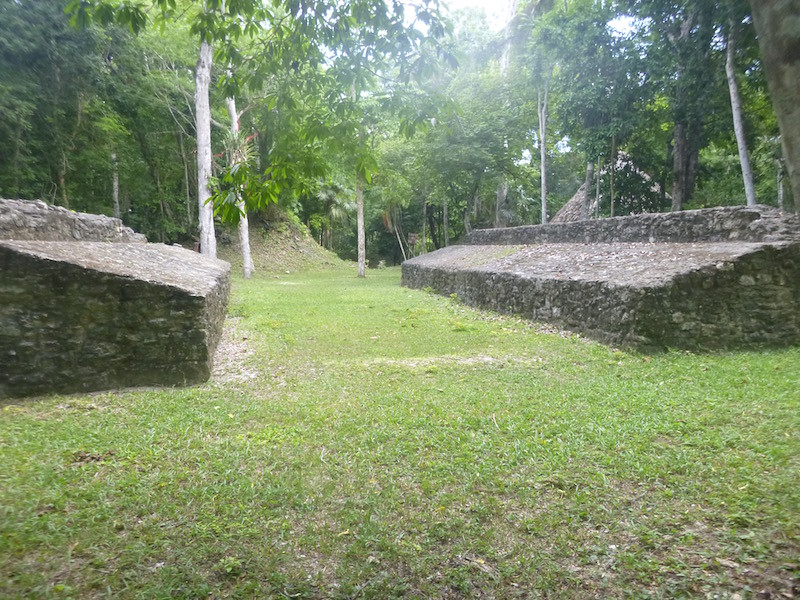 I’ve seen these enough different times now to understand what I’m looking at. This is a Mayan ball court. I’ve seen the same arrangement at three different sites now. 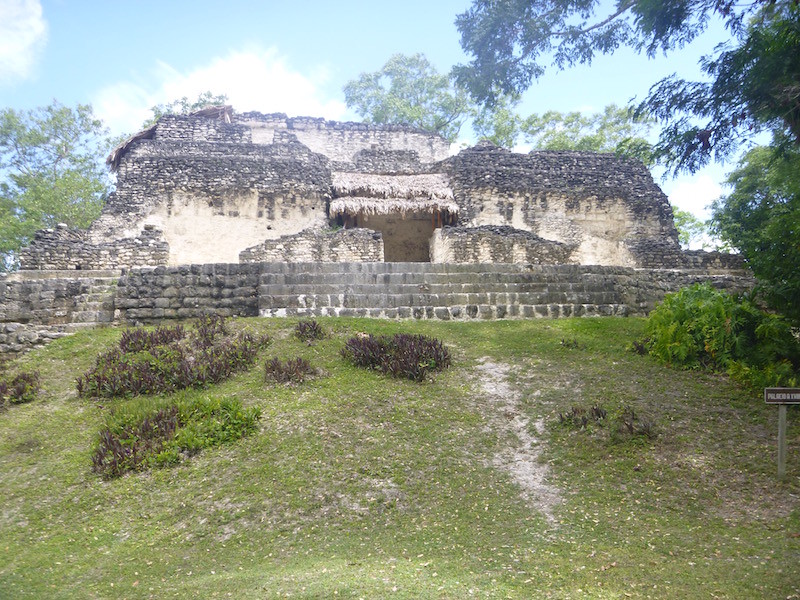 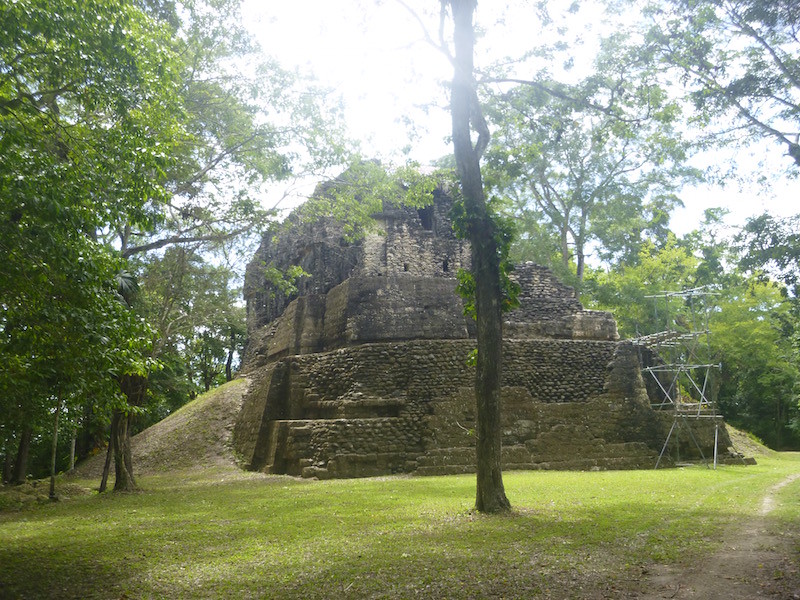 I spent several hours walking around two different large sites at Uaxactun, and in that time I saw no one. And I loved it. It was incredibly peaceful. Perhaps because of the difficulty getting here, it hasn’t been developed like Tikal or Teotihaucan or Palenque.

I rode the twelve miles back down the dirt road through the rain forest, savoring the solitude. As I emerged at the gate to get out, I met the hordes of tourists getting off the buses for Tikal, blissfully unaware that Uaxactun even exists.

I was glad for my private tour. What a gift.