Which is Swahili for “Toto, we are not in Kansas any more.”

As I originally headed south into Mexico nearly ten months ago, my Spanish vocabulary increased initially by exposure to road signs. The easy ones like “Curvas Peligrosas” (Dangerous Curves) were first, followed by longer explanations. You see them enough, you start to understand them,

The same happens in Tanzania, where I’m learning some very basic Swahili, first from road signs, and a little more from interaction with the people. From the signs, I’ve learned “pole pole” (slow), “safari njema” (safe journey), “hatari” (danger), “kona kali” (sharp curve), and “karibu” (welcome). From the people I’ve learned “karibu sana” (warm welcome), “Jambo!” (hello!), “asante” (thank you) or “asante sana” (thank you very much), and lala salama (good night, or sleep well). As with other countries I’ve visited in the past, I find that just a few words in the local language can change impression and attitude of the locals towards me. There are 130 tribal languages in Tanzania though, so Swahili, the national language, will have to do.

Oh, and of course, I already knew a couple of words of Swahili: Hakuna matata. And yes, you do occasionally hear that phrase, though often it’s from a tour guide to his group of tourists, or vice versa. It’s actually kind of funny how much influence the movie “The Lion King” has had here: warthogs are commonly referred to as “Pumbaa” now.

Sometimes the road signs aren’t what they seem. For example, twice I passed signs in rural areas that said “Zebra Crossing”. Although I suppose it’s possible that a striped horse could cross the road at this point, that’s not the meaning; it’s more simple and direct than that. “Zebra” simply means black and white stripes, as in the stripes painted on the road for a pedestrian crosswalk.

In the southern part of Tanzania, I often passed homes and buildings with an “X” spray-painted on the side of them. I’ve seen this before in the States as an indication of the building having been checked and cleared after a flood or earthquake. I wasn’t sure what the meaning was here in Tanzania, so I finally asked. It turns out these are homes that were built too close to the road, and have been marked to be cleared. Ouch. I guess that’s what happens when you’re basically just squatting, but when you have no money to begin with, that’s a painful lesson.

As I traveled further north (and east) in Tanzania, I saw more Swahili and less English. There is also a larger Muslim culture here than in the south, and even some of the buildings begin to take on a more eastern look. The numbers of small roadside Jehovahs Witness, Seventh Day Adventist and Apostolic churches have disappeared, replaced by the occasional mosque or Islamic center. I saw more women in headscarves and some schoolgirls wearing headscarves with their school uniforms. However the Muslim and Christian ways of life seem to co-exist here.

While riding through the Mikumi National Park, I was looking for wildlife. I didn’t see much, but I did see a large number of giraffe, and more monkeys and baboons. I caught both on the GoPro, but unfortunately because of the wide lens angle, the giraffe were so far away that I don’t think they’d show up unless on a very large screen. 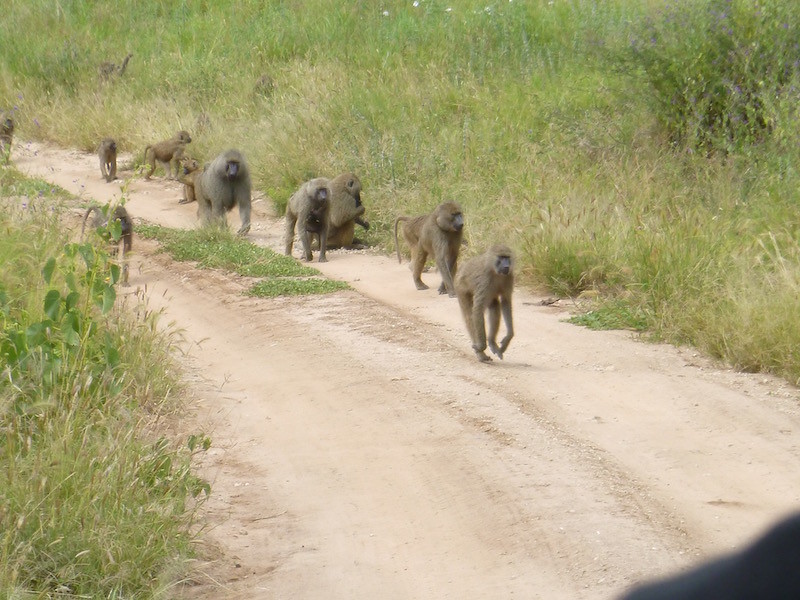 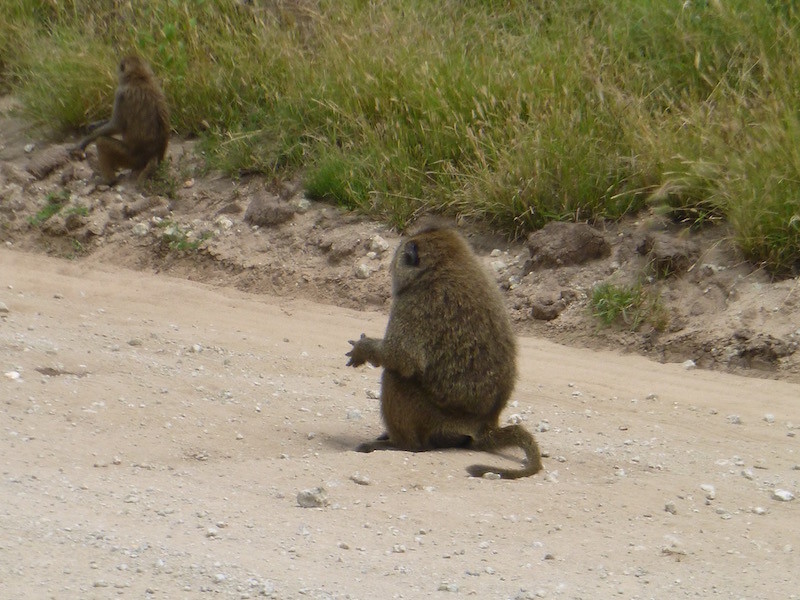 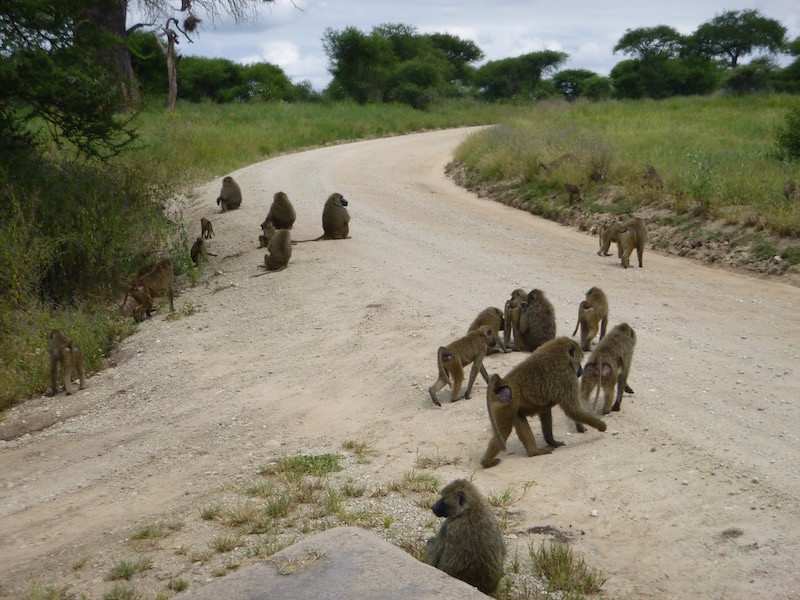 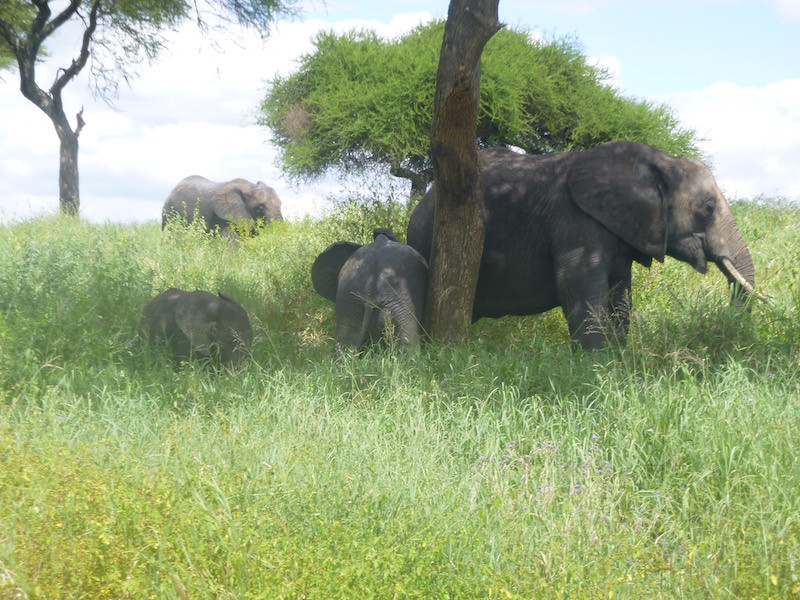 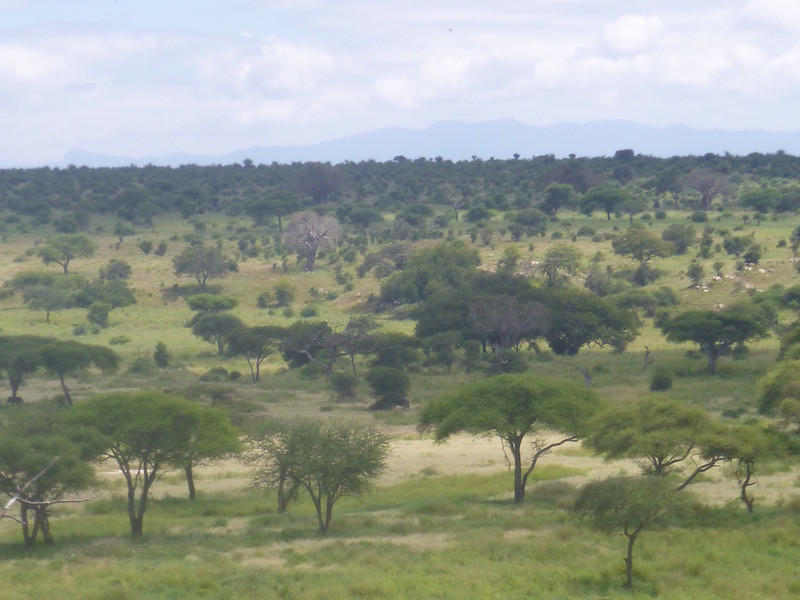 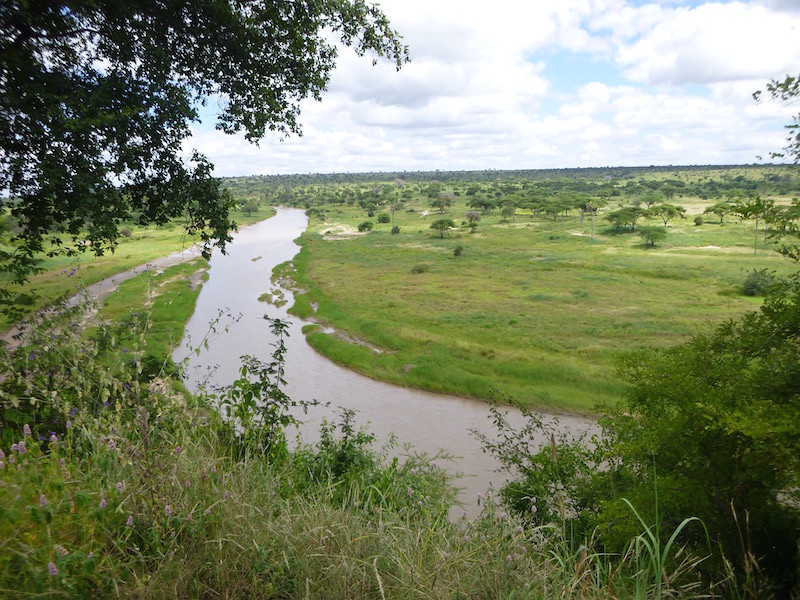 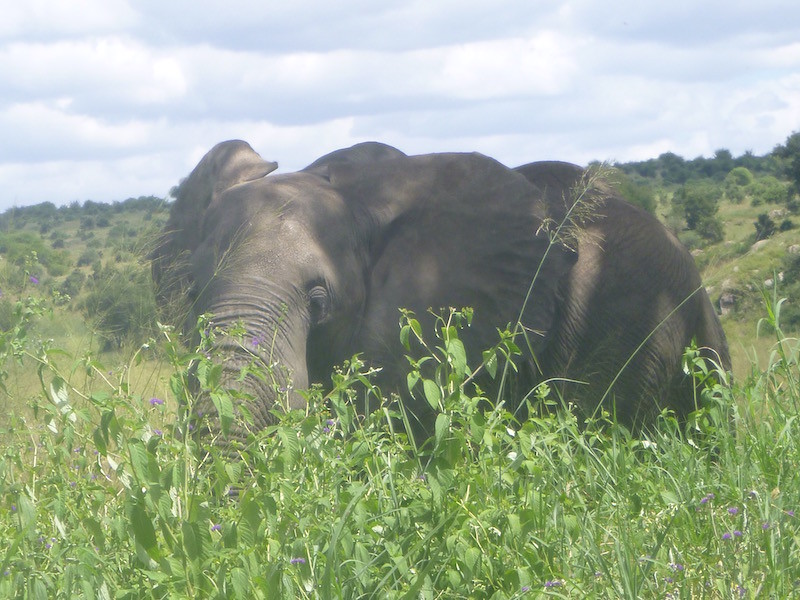 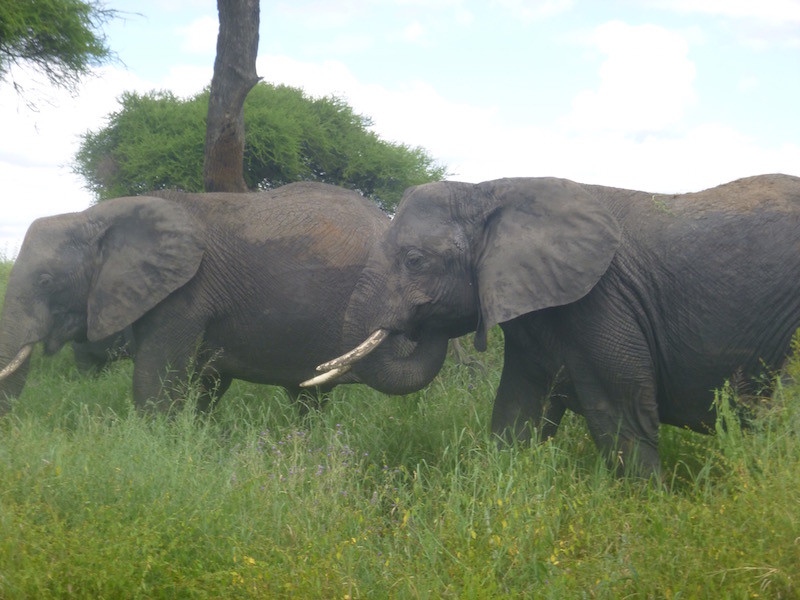 A little further up the road I passed through the Valley of the Baobabs. These alien-looking trees are truly incredible, and had it not been for the possibility of large feline wildlife in the area (apparently there are lions and cheetahs here), I would have stopped and spent much more time studying them. These are some of the largest tree trunks I’ve ever seen, yet the trees themselves are quite short, with very thick short branches and odd surface textures. 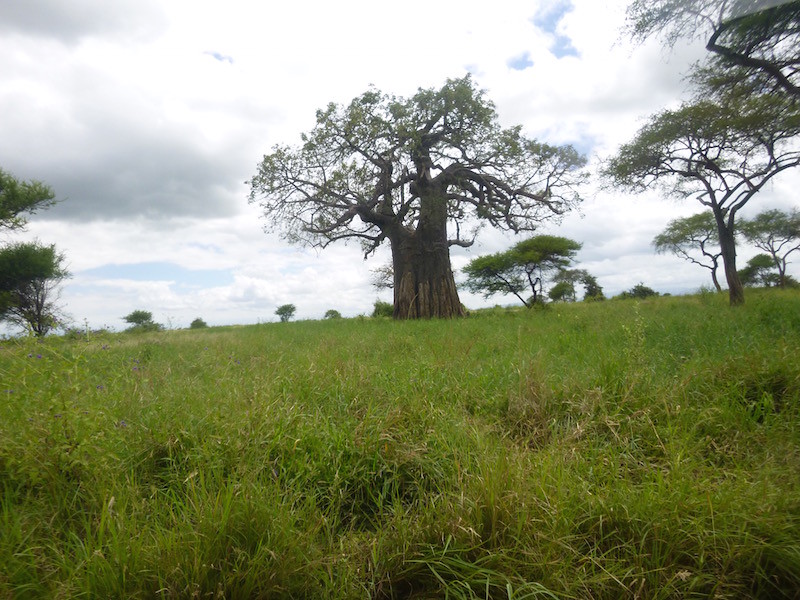 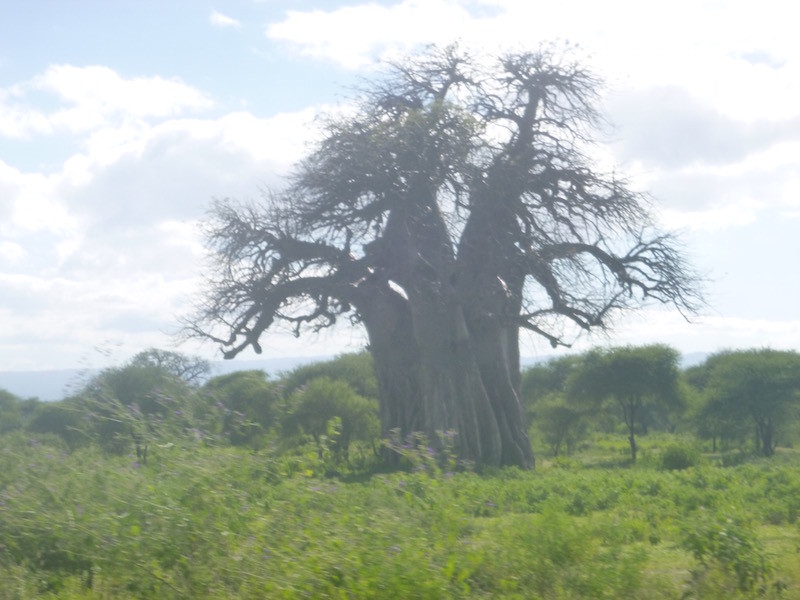 The mountains  began to appear on the northern side of Mikumi park, slowly fading back to plains as I neared Dar Es Salam. With the lower elevation the temperatures increased and I stopped to open the vents on my riding gear. The ever-present people walking and bicycling on the road were very friendly as they passed, waving and greeting me in Swahili. I even had a couple of truck drivers honk and wave, giving me a thumbs-up.

Further north, large mountains came into view and I knew I was getting close to Mt. Kilimanjaro. 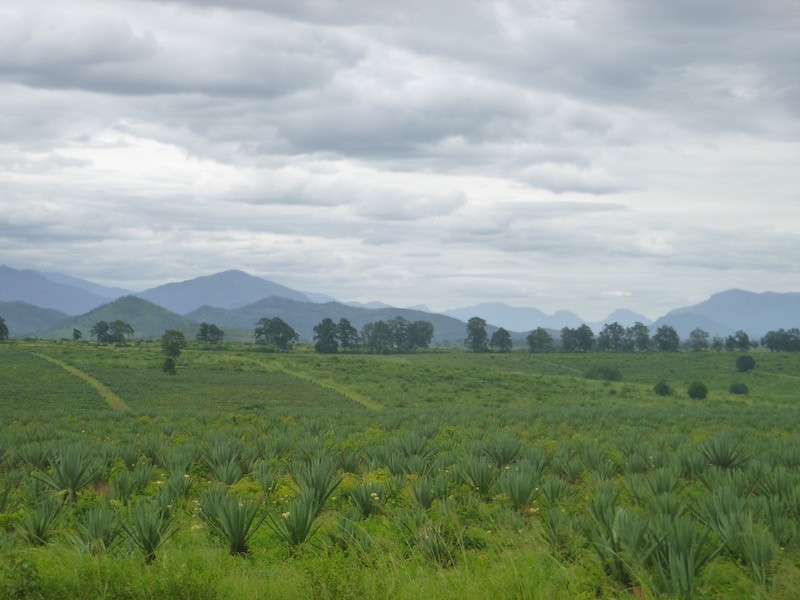 In the small village of Mombo, I turned onto a narrow road that climbs into the green Usamara mountains through Lushoto and on for 27 miles before arriving at my destination for a couple of nights. Muller’s Mountain Lodge is deep in the mountains, and is a 1934 English style farmhouse built during the German colonial days on beautifully manicured grounds, with camping on the hillside overlooking the valley. A very relaxing atmosphere. 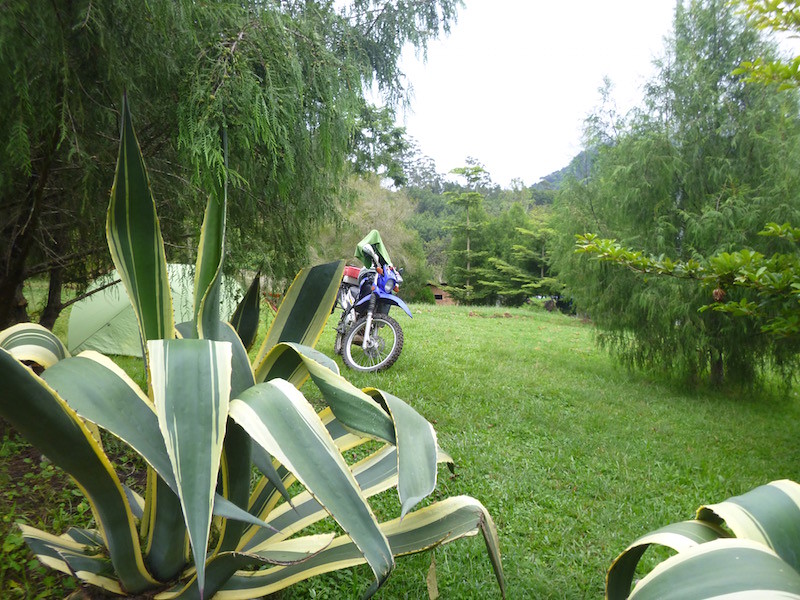 The first night I camped there, two safari trucks full of Austrian tourists arrived as well, although as often happens, I was the only camper; they were staying in the lodge. The next morning I met Francis, who the lodge manager introduced as Grandfather. 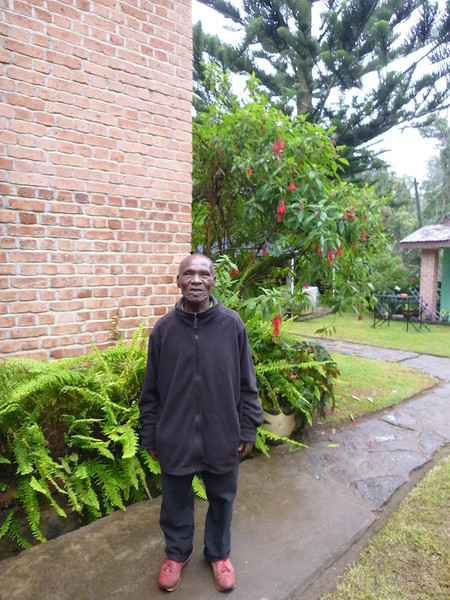 Francis is 81 years old, soft-spoken and fluent in English, Swahili, and I believe German, and a pleasure to speak with. He was there to lead the Austrian tourists on a six hour hike through the mountains, and invited me along. It was difficult for me to gracefully decline, not the least of which because I felt like I was not in good enough shape to keep up with this 81 year old. It rained most of the day, and I was glad I didn’t go along, as the ground here is very muddy and slick, and I was afraid of injuring my ankle again.