I spent nine days, from May 15 to May 24, riding the first 1800 miles of the Trans America Trail. I rode what is referred to as the “Blue Route”, which is defined as the “original TAT route”, although the portion east of Tellico Plains, Tennessee has been added since the original route was created.

It took me about the first seven of those nine days to come to terms with the fact that this is a route made up of a combination of paved back roads, small highways, and county-maintained gravel roads, which apparently are what is referred to as “off-road”. The majority of the route is very scenic, especially through the Smoky Mountains and the Ozarks. But the far majority of this route can be ridden on a Harley RoadKing (albeit at a slower pace).

The problem is not with the route, but rather with my perception. I blame myself for this confusion. I am not a social media person. I don’t subscribe to a bunch of forums, or heavily discuss or plan my ride ahead of time. I do this on purpose because I learned from riding around the world that researching a route is a fine line: the less you do, the bigger the chance that you might miss something of interest along the way. The more you do, the more it feels like “been there, done that” when you finally arrive. Several times on my round-the-world ride, I arrived at a beautiful place only to think “Yep, it looks just like it did online.”

In this case, my lack of research caused me a bit of confusion over the “trail” portion of this ride. As background, I have spent almost half a century riding and racing motorcycles, and trail riding in Southern California, Colorado, Idaho, etc. My personal idea of a good day of trail riding is similar to what is referred to these days as Extreme Enduro or Hard Enduro.

So after the first three or four days, I kept asking “When does the trail start?”

And yes, I am aware that the route gets more challenging further west, which I intend to experience as time allows.

For reference, here’s a breakdown of the “original route” as I saw it:

The majority of this route can be done in a passenger car without much trouble. The exceptions are primarily several places where a bridge is closed, which can be ridden around or across on a bike, whereas you would have to detour in a car.

I probably came upon five or six of these “Bridge Out” situations. Typically there was a way across or around.

So now that I’ve whined, I’ll throw in a little recap of what I saw and enjoyed, and a couple of quick stories.

The North Carolina route seems to have been primarily created so that you can say you rode “coast-to-coast”. I had never been to the Outer Banks, so it was worth the trip. But all the way back across North Carolina is flat and paved. Eventually you get to the Smoky Mountains (and the Blue Ridge Parkway). The scenery is great, and the gravel forest road is great.

Forest road heading up to the Blue Ridge Parkway in western North Carolina. 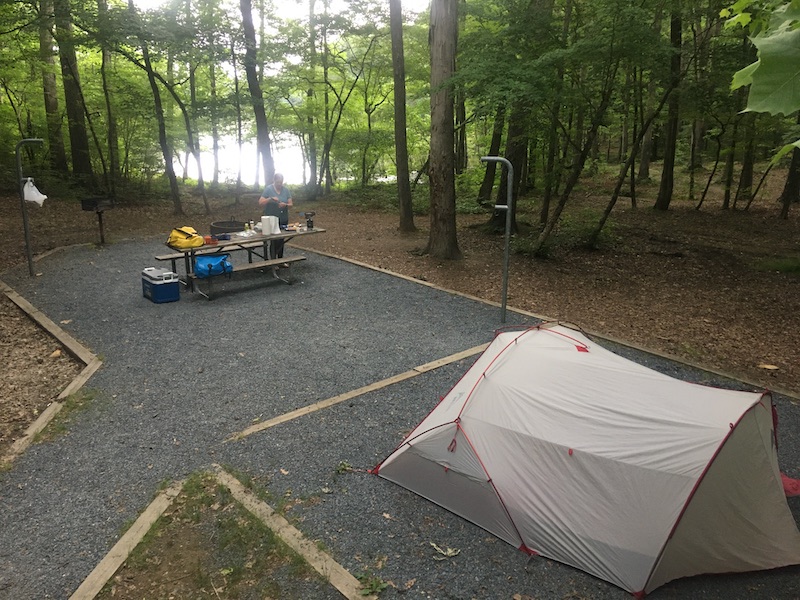 Our campsite at Badin Lake Campground. I had several people say “Oh, your wife has to follow you to carry all that stuff”. Nope. As you’ve seen in my RTW trip, and as you’ll see in the next leg of our travels, we carry “all that stuff” (except the cooler) on the bike.

I had multiple experiences on this trip where the GPS took me places that I probably didn’t want to go had I known where I was going, or took me to a road that no longer existed (the route I purchased on an SD card in order to do this ride was created in 2015 or 2016). This lead to both good and bad experiences. Here’s a couple:

The Down Side of Blindly Following GPS Routes

The scenery on the Blue Ridge Parkway and Smoky Mountain National Park is beautiful, but here’s my first horror story:

Cades Cove Scenic Loop. If you haven’t heard of it, google it. Or google “Cades Cove traffic”. This eleven mile long, one lane, one-way loop is jammed bumper-to-bumper with tourists in cars, creeping along at two to five miles per hour, but mostly two. Even the National Park Service’s website advises that it can take between two and four hours to drive the eleven miles. Every few miles, there might be a bear in a meadow, at which point everyone stops completely. Here’s the catch: the route follows the Cades Cove Loop about half way around, then turns off on a side road. Unfortunately, I took a “short cut” after the first hour on the Loop and missed the turnoff road, so I had to start the loop over. So after another couple of hours of walking my motorcycle, I arrived at the turnoff, only to find out it is closed for repairs. So after five hours of going in circles, I exited the park and took a detour to the top of the Tail of the Dragon (318 curves in 11 miles), thereby making up for my previous hours of sitting in traffic. I arrived at the Two Wheel Inn in Robbinsville, NC right at dark. 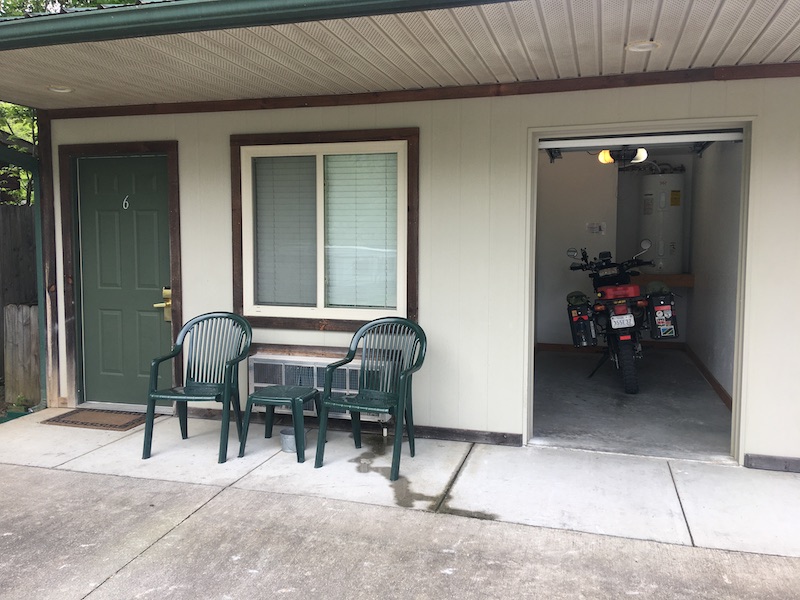 The Two Wheel Inn in Robbinsville, NC. Very specifically caters to motorcyclists. Just inside the door to your room is a garage door opener on the wall, which opens the motorcycle-sized garage door next to your room. There should be more of these places. Highly recommended.

The next morning, the route took me across the Cherohala Skyway (more beautiful mountain vistas), to Tellico Plains, Tennessee. I did a quick tire change there, as my knobby tires were getting a little worn (a thousand or so miles at home before leaving, 1600 miles from home to Cape Hatteras, and another 800 or so to here, nearly all on pavement).

The Exxon Station in Tellico Plains has a nice motorcycle picnic and rest area behind it. This was the perfect place to have lunch and change tires.

Sometimes following the GPS can get you lost. And sometimes that turns out to be worth it. Here’s an example:

After riding several miles of gravel-paved levees in northern Mississippi and eastern Arkansas, the levee dropped me off into a little town called Clarendon (population 1487). Clarendon sits on the east bank of the White River, and a large levee separates the river from the town. My GPS took me into town, down several residential streets, to the levee, where the route said to go straight. Straight across the White River. Large levee in front of me. No road. No bridge. But the route went straight into what looks like a large lake. I found a road up onto the levee and looked around. There was definitely no road across the water here. I could see a railroad bridge across the river to the south, so I dropped back down onto River Road which parallels the levee, and headed south. At a stop sign, a PT Cruiser pulled up to my left. The driver gave me a big thumbs-up, and I waved back. I rode through the intersection and about another half mile down the road, then pulled over. I could see the railroad bridge above me, and in the distance a large highway overpass. It was clear that River Road was not going to connect to either of these.

The PT Cruiser pulled up next to me, and the driver rolled the passenger side window down. He asked, “Are you really riding around the world on that?”

I was a bit surprised, and caught myself in a bit of a racist thought. First, that in Eastern Arkansas, in a small very rural farm town, here was a Black man, with no southern drawl, who clearly had read my message in Spanish on the back of my bike (my Rotopax gas can I am carrying has “Montando en todo del mundo” written on it in Sharpie). Although to be honest, I would have been surprised by a white person in this area having caught the Spanish on my bike as well. So I guess it wasn’t racist as much as judgmental of the local population.

“Yes. Well, I have. Now I’m just riding from North Carolina back to Texas.”

“Well, my GPS is telling me to go across the river back there in town, but obviously there’s no bridge.”

He shook his head and laughed. “They blew that bridge up quite a while back.”

That caught me off guard. I hadn’t even seen an indication that there had ever been a road there. (Later that night I looked at Google Maps, and even they still show the Highway 79 bridge crossing the river in town, but if you look at the satellite image, there is no bridge).

We talked for several more minutes. At one point, he asked “Do you know anything about California?”

“I’m from San Pedro”, he said, using the Southern California pronunciation of “Pee-dro” rather than “Pay-dro”.

I laughed. “Dude, you are probably the only person in a thousand miles that knows it’s “Peedro” and not “Paydro”. I grew up in Torrance”. He laughed and we fist-bumped.

He talked about all the surfing spots he used to hang out at, and I noticed then that he had surf stickers and scuba stickers across the back window of his car. He truly seemed out of place in Arkansas. I’m pretty sure he saw me as being as out-of-place in Clarendon as I saw him.

I wish now that I had taken a photo of us there, but we were blocking the road (okay, there wasn’t a lot of traffic), and neither of us ever got out of/off our vehicles. But that five minutes with Roland in Clarendon made my day.

The flat, sprawling farmland eventually began to morph into rolling hills and everything got very green as I entered the Ozark Mountains. As far as riding goes, even though these were still county roads, this was the highlight of the Eastern half of the TAT. I spent more time on dirt and gravel and less time on pavement, and even had a bear run across the road in front of me on a ridge.

County Road 5671 in the Ozarks. This was the closest thing to a trail I had ridden in 1800 miles. Nice dirt with just a little gravel. Great scenery. A bear ran across the road in front of me at one point. Still a maintained County Road.

Now that I’ve “checked that square”, as my buddy Tom would say, I can regroup and begin the next leg of the journey. Diana and I are back home for a few days, sorting the gear and re-packing. The blog posts should pick up pace as we head out next week, two-up on the larger bike.