I had hoped to ride some of the Trans Euro Trail in Poland, but unfortunately our route and the Trail were headed in opposite directions. We’ll definitely have to come back to Poland (for a lot of reasons), as our time this trip was limited.

This was my second time to Poland, and Diana’s first. Last time I entered from Germany and spent most of my time in the southwest area of Poland, in Lower Silesia, visiting friends I had met in the US. This time we also were headed to visit them, but we had to traverse the breadth of Poland to get there, so we took a roundabout way in order to see some other sights.

We didn’t have a plan for our first night in Poland as we were simply trying to cover ground to get to the area around Krakow to begin our sight-seeing. Poland is a large country, and it was going to take us a couple of days to head that way. I searched Google for “campground” and came up with a place in Augustów that advertised itself as a campground and RV park with cabins. Perfect. Diana emailed them, asking if they had a cabin available, as it looked like we might get more rain, and we were finding that Poland fit our budget better than Norway and Finland when it came to indoor lodging. The response came back quickly: “Yes, we have rooms available for the week.” So we headed in that direction.

When we arrived in Augustów, the GPS directed us into a subdivision on the lake. The area looked to be more of a summer resort town, and the subdivision was fairly small lots with nice homes. It didn’t quite seem like the place for an RV park. I was even more confused when we pulled up in front of a large house. We got off the bike and I walked around the house. In the back, which faced the lake, it became clear why they had rooms available “for the week”. This place was a children’s summer camp. We appeared to be the oldest guests, by about four decades. Why this place is listed as an RV park and cabins is beyond me, but it definitely wasn’t what we were looking for.

I decided that since the prices seemed reasonable for hotels in the area, that we would try again a bit further down the road. This time I found a nice looking hotel, about an hour away and a bit off the main road in the small town of Kolno. We jumped back on the main highway and continued on. About twenty miles later, the freeway ended. As in it hadn’t been built yet, and there was no road going that direction. Of course our GPS told us to ignore those facts and continue straight ahead at 90kph into nothingness, the map on the screen showing a nice freeway with a cloverleaf exit many miles ahead that would take us to Kolno.

Nope. Nothing but cornfields and cows. I took the last exit and came to a crossroads. It looked to me that we could head back about six miles and take an earlier exit that would take us the back way into Kolno. So we turned around and got back on the freeway heading north back from where we came. For the next six miles the GPS continued to scream at me to make a U-turn and continue into the non-existent section of the freeway.

When I arrived at the earlier exit on the map, there was, of course, no exit. There was definitely a bridge over our heads with the road to Kolno, but no way to get there. We continued back-tracking on the freeway until we reached an actual exit, which was another four miles. At that point I turned west and navigated by the seat of my pants until we were able to connect to a small rural road that took us to Kolno.

Have I mentioned that Garmin’s European Maps suck? Besides this little episode of displaying future hopeful roads that don’t really exist, throughout Europe Garmin’s maps have shown us incorrect speed limits about eighty to ninety percent of the time (in the direction that would have gotten us speeding tickets) and usually it’s off by between twenty and thirty kilometers per hour. Although occasionally it will attempt to make up for it by telling me that the speed limit on a freeway is 40kph (24mph) when in reality it is 130kph (81mph).

When we finally arrived at the Dwor Rozinski hotel, it was just one more thing that left me scratching my head today: on the outskirts of this small rural community was this beautiful hotel.

Built by a private individual as a fairly lavish wedding venue. We arrived in between weddings, and there were maybe six other guests, mostly traveling businessmen.

The room, with a full breakfast buffet included, was 240 Zlotys, or about $53. 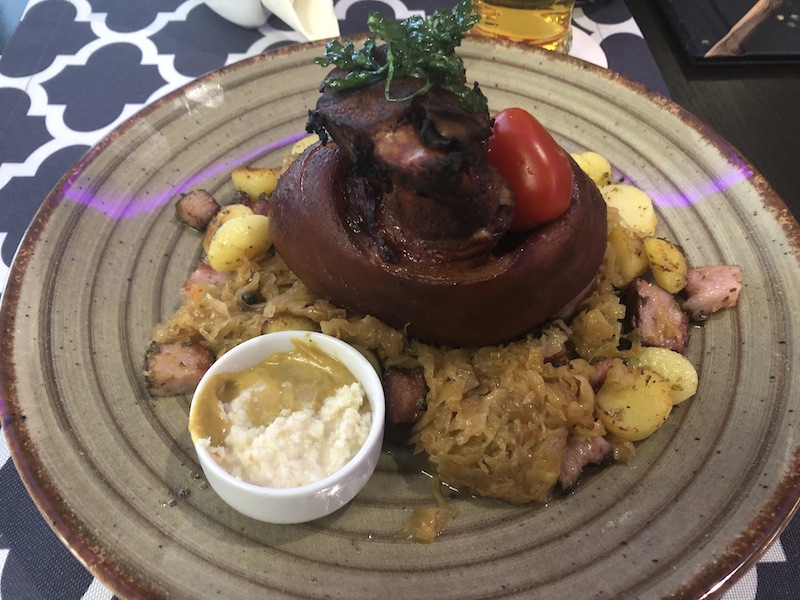 That evening we had a great dinner in the hotel restaurant. This is my Old Polish Pig Knuckle. Huge. Very tender, melt-in-your-mouth pork. Diana had chicken breast with Chanterelle mushrooms and potatoes, and for dessert we had ice cream with berries. We also had a couple of alcoholic drinks. The total bill was $24, which is about the price of one hamburger in Norway.