I was startled awake at 5am on Sunday morning by Diana saying “Oh Sh*t!”

“What’s wrong?”, I asked sitting up suddenly in the tent.

“Look at this!” she said, and handed me her phone.

For the past two years, we had made plans to attend the Cooper’s Hill Cheese Roll Festival after watching a documentary on Netflix called We Are The Champions. If you haven’t seen it, it’s worth a watch. Every year on the Monday after the last weekend in May, the event is held in Brockworth, outside of Gloucester, at the steepest grass-covered hill short of a cliff that you can imagine. Contestants line up at the top of the hill, and a large wheel of cheese is rolled down the hill, after which the contestants run, tumble, fly, spin, flop and otherwise crash to the bottom of the hill chasing the cheese. No one actually catches it; the person that manages to fling the remains of their body across the finish line at the bottom first wins, and the wheel of cheese is awarded to them as the trophy, sometimes in the hospital, hopefully not post-humously. It’s incredibly entertaining to watch, but very painful to experience for many.

Well, in our case, after watching the movie, we immediately looked it up and put it on our calendar, and booked three nights at the Sheephouse Campsite to cover our time in both Bristol and Gloucester. We also booked a house sit in Manchester to begin the evening after the Cheese Roll.

Until the morning before the Cheese Roll, when Diana looked it up again. For the first time in history, they had decided to postpone the Cooper’s Hill Cheese Festival for one week due to the Queen’s Platinum Jubilee celebration. At which time we would be on the Isle of Man.

Oh well. Congratulations to the Queen on her Platinum Jubilee. But please don’t mess with my Cheese Rolling Festival again.

No Cheese Rolling Festival for us this year. (Post Note: Here’s a video I found with some clips from this year’s Cheese Roll:

I texted our homeowner in Manchester where we were supposed to arrive the next day to sit her two cats for a couple of days. She needed to leave early the next morning, and agreed that it would be great if we could arrive a day early to meet the cats and learn the routines. We packed up and said our goodbyes to Tim and Miriam, the owners at Sheephouse, and headed north, in and out of the rain. It was an unexpected 230 mile day, but less traffic than in Bristol, so not too bad.

We arrived at our house sit in Failsworth, Manchester and met Jen, the homeowner, and two great cats, Luna and Neville. Luna was much more open and curious, quickly making friends. Neville was very shy, and spent his time under Jen’s bedcovers. For two days we would check on the lump in the bed, raise the covers and have a chat, and leave him some food next to the bed, which he quickly devoured once alone.

Luna. Great cat to just hang out with.

Luna liked to hang out in the window and watch both outside and inside.

She also liked to lay on my riding jacket, with a “I always do this” look.

It was Sunday night, and we needed to find some dinner. The grocery stores were all closed, as were most of the restaurants. We found a Chinese Food take-away place that was cash only. At this point we still didn’t have any cash, but fortunately there was an ATM at the end of the shopping center, so I grabbed some cash and walked back to the Chinese place. We ordered some food, and when it was ready, we took the bag and went outside to sit on the short wall and eat (the place is take-away only, just a counter to order, pay and pick up your food). While outside, the woman who took our order came out and said “What are you doing? My husband saw you out here on the video camera. Come inside!”. We walked back in, and her husband appeared from the kitchen with a small table and passed it over the counter. There were two chairs at the end of the counter and they made a small dining area for us. Other customers — clearly regulars — came in and looked at us quizzically, as if to say, “We never get to eat here.” One even pointed to the table and said “All you need is a little candle in the middle!”. 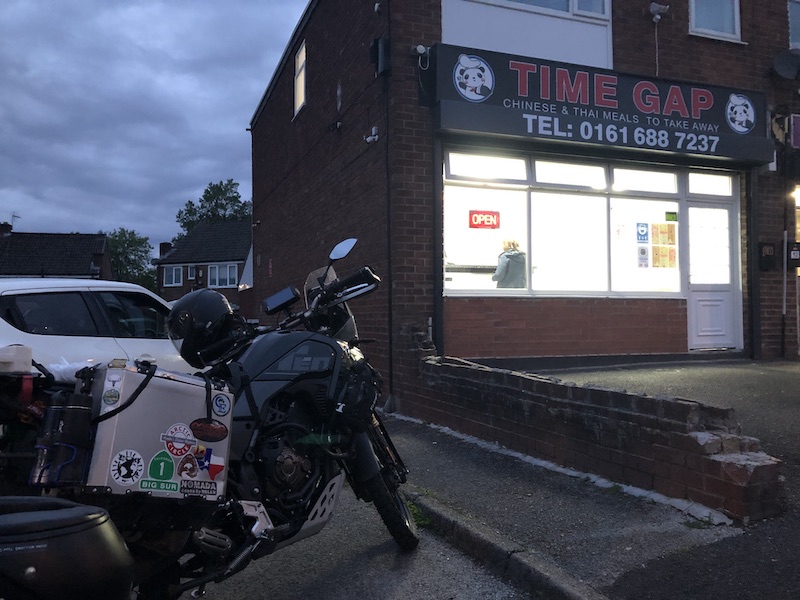 Time Gap. Highly recommended. Be sure to call ahead to reserve the only table, which is usually leaning against the wall in the kitchen.

The food is nothing special really, just good chinese take-out. But it’s extra tasty when you’ve been cold and wet all day.

In a cheap Chinese take-away, in a small Manchester suburb, another great memory was made.

The following evening, we had another coincidental event. We had watched another documentary before leaving home on the rock band Queen with Adam Lambert as their “new” frontman. We thought it would be great to see them in England, but when we checked on tickets in London, we found that this was a concert that was delayed since 2020 due to Covid, and the tickets had been sold out for two years. So I wrote it off and didn’t think about it again, until we booked the house sit in Manchester. For some reason, I happened to look at the concert dates again, and found that they were doing two shows in Manchester, and one of them corresponded to when we would be there. A quick search for tickets found that a few upper level seats could be had, and we quickly grabbed two.

So on our second night in Manchester, we took the train from Failsworth to Victoria Station and had dinner at an incredible Indian Street Food place called Mowgli. Small plates of tapas-style dishes that will forever change my view of “Indian Food”. I’m missing it already.

These are called Yoghurt Chat Bombs. They are crisp bread puffs filled with chickpeas, spiced yogurt, tamarind, coriander and mint. When you bite into them, they explode in your mouth. I could eat a couple dozen of these. One of the best things I’ve had in a long time.

The rest of our meal at Mowgli.

After dinner, we walked back to AO Arena, which sits directly above Victoria Station, and watched Queen with Adam Lambert perform their greatest hits for two and a half hours straight. Much of the audience was our age or older, but everyone was a true fan, and at times the entire arena was singing louder than Adam Lambert. It was a great event.

One thought on “Unhappy with The Queen’s Show, but happy with the Queen show.”