Jen returned home to Luna and Neville, and we headed the short 40 miles to Liverpool for the night. The next morning we hopped on the Magical Mystery Tour bus for a two hour tour of historical sites related to The Beatles. Our tour guide Neil was humorous and very informative. We saw Ringo’s birthplace and childhood homes, George’s childhood home, John’s childhood home, Paul’s childhood home, Penny Lane, Strawberry Fields, the Cavern Club, and more.

,br>
George Harrison’s childhood home at 12 Arnold Grove. This house was bought a couple of years ago by a US fan who has turned it into a B&B rental. 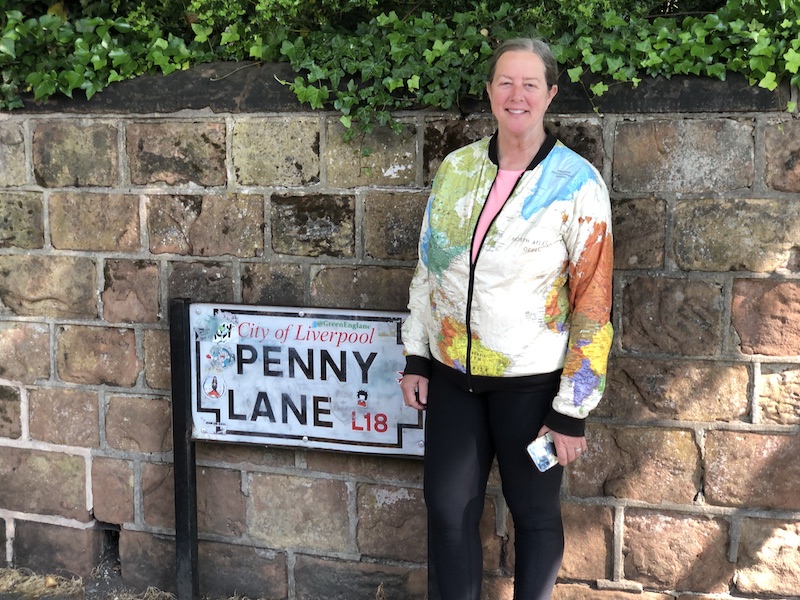 One end of Penny Lane, at Greenbank Road. At the other end the road changes names, and that’s where the bus shelter and barber shop from the song are located. Even though it isn’t technically on Penny Lane, it sounds better than “On Smithdown Place there is a barber showing photographs”.

This Penny Lane sign is about a hundred yards up from the Greenbank Road end. It’s almost gone now, but just below the Peace symbol is where Paul McCartney autographed the sign during an episode of James Corden’s Carpool Karaoke.

Not a great photo, as it’s taken through the screen from inside the bus, but this bus shelter is where The Boys would meet as it was sort of a central location for them to catch the bus into downtown Liverpool. The bus shelter has been rebuilt since, but it is quite literally “in the middle of the roundabout”. We looked behind it, but couldn’t find a nurse selling poppies.

This is the barber shop from Penny Lane. Although the name has changed, the interior still has photos of the boys getting haircuts. Note it even says Penny Lane on the window, although it’s actually a block north of where Penny Lane changes to Smithdown Place. 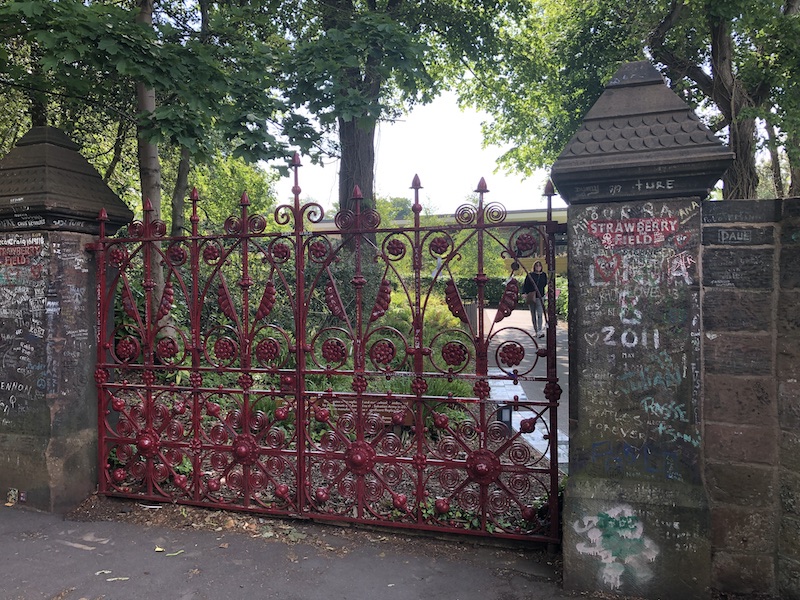 Strawberry Fields was a Children’s Home when John Lennon wrote the song. It still belongs to the Salvation Army. The iconic gates have been replaced with painstakingly accurate detailed replicas.>

This is Paul’s childhood home at 20 Forthlin Road. Paul wrote over 100 songs in this house by the time he had turned 19, and the band rehearsed in the living room. Paul’s mother died when he was 14 years old, and he later had a dream in which his mother appeared and calmed his fears by telling him “Let it be”. Suddenly I understood the lyrics to the song much better.

The Cavern Club. Made ultra-famous by The Beatles, but many, many other bands have played here also.

After the tour was over, we loaded up again and headed north, another sixty five miles to Morecambe, which is on the coast just a few miles north of Heysham, where our ferry to the Isle of Man will leave from. We checked into our two bedroom apartment on the third floor of a typical British row house, and waited for two of our Polish friends, brothers Marcin and Lukasz, to arrive. They had left Poland just three days earlier, riding long days across Europe to meet up with us.

Marcin, Pat, & Diana across from our place for the night in Morecambe, just north of the Heysham Ferry Terminal.

They pulled up about 8pm, and we helped them unload and relax for a few minutes before heading out to a Wetherspoons, which Lukasz described as “McDonalds for Alcoholics”.

Wetherspoons has a ton of locations all over England, with a large food menu, and reasonable prices on food and drinks. Lukasz calls it “McDonalds for Alcoholics”. We drank to that. And no, this is not our table, but the one next to us. We ran out of room on our table…LOL.

One thought on “Visiting Rock and Roll History in Liverpool”