My last weekend in Antigua. It’s been raining every afternoon, but the mornings have been gorgeous, with temperatures in the 60s and low 70s. On Saturday I walked to the mercado again and bought some fruit: two limes, an onion, two avocados, and six rambutans. Grand total: Fifty two cents.

I think I mentioned rambutans before, but if not, they look like big, hairy strawberries: 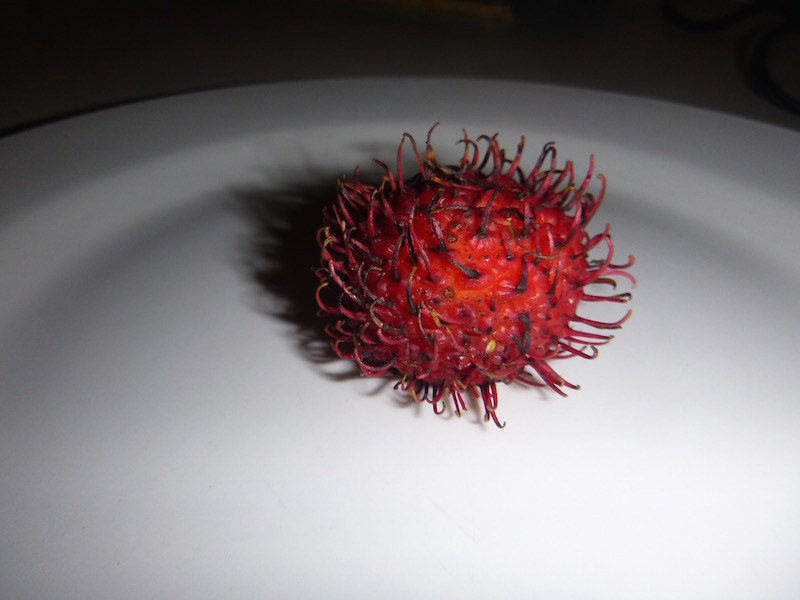 BUT…they are not hairy strawberries. Not even close. You don’t just bite down on one of these. First you have to slice it open and peel the rind off of the fruit inside. 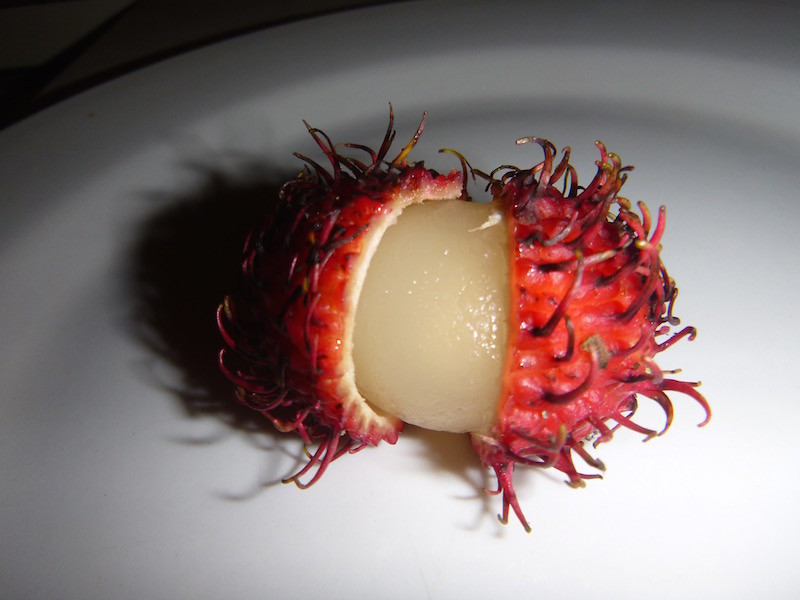 Sliced open with the white fruit inside showing.

NOW you can pop the white fruit out and pop it in your mouth.

BUT be careful, because there’s a pit inside the fruit. Its all worth it, though. A rambutan tastes and feels (the texture of the fruit itself) a lot like a green table grape, although it’s much larger and thicker than that.

After a little bike maintenance Saturday afternoon, dinner was a great Sopa (soup) place. Because it was election weekend (the Presidential elections were Sunday), alcohol was not allowed to be sold after noon on Saturday. But, as with many things in Guatemala, rules are made to be broken, and the waitress delivered the Brahva beer with a napkin wrapped around the mug to “disguise” it. The Italian meatball soup was fantastic. Probably will have to go back there before leaving Antigua.

Sunday morning came early, as the tour bus left at 6am, with the driver, our guide and three of us aboard. This time of year it’s important to take the early morning tour rather than the afternoon tour, since it rains every afternoon.

It took about an hour and a half to get to the beginning of the trail to Volcan de Pacaya. Along the way, we were stopped by a blockade that was making sure that nobody in a van or bus was transporting masses of people to vote. Apparently this is a no-no. Wouldn’t want to make it easier for all of the poor people without transportation to actually vote. But enough politics for now…more of that later.

The trek up the volcano is fairly short and not too steep for the most part. The entire loop is a little over four miles, with only a slight elevation gain from around 6,000 feet to around 7,500 feet.

Volcan de Pacaya. You can clearly see where the cone collapsed during the 2010 eruption and lava poured down this side.

Yes, that is steam coming from the volcano. Pacaya is still active, with the most recent eruption in 2014.

There are small vents along the trail where you can roast marshmallows. Couldn’t pass that up.

Panoramic view of Pacaya. This is actually the third vent or cone for this volcano; it has erupted in different places over the years. This one is actually named MacKenney, for one of the geologists who has been studying the volcano for a long time. 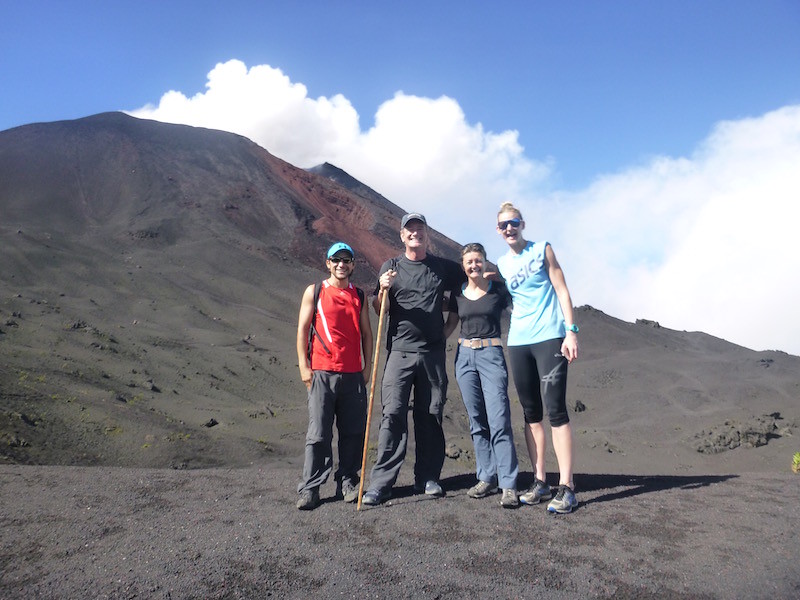 Another multicultural group photo. L-R: Our Guatemalteco tour guide David, me, Judith from Switzerland and Katrina from New Zealand. Why am I always the old guy??

Being the “old guy” has its’ advantages. No one expects the old guy to be first up the mountain. Everyone cuts the old guy a little extra slack. They all think the old guy might have trouble doing this stuff. I’m still too competitive to give in that easy, and typically I’m eager to prove them wrong. At Semuc Champey, I was the first to jump off the rope swing into the river, after everyone else declined. Was that smart? Of course not, but occasionally you have to prove that just because you’re the old guy doesn’t mean you can’t do things. Maybe the wrong tactic when climbing a steep trail at 7,000 feet. On the way up the volcano, our other tour guide Manuel asked me a couple of times how I was doing. “Como estas?” “Bien” (wheeze, gasp). A little later: “Como estas?” “No hay problema. Es pan comido.” (No problem. It’s a piece of cake.) (Gasp, wheeze.) I was glad this was a short hike with a long downhill. I’ve definitely had more exercise on this trip than I’ve had in the last couple of years. 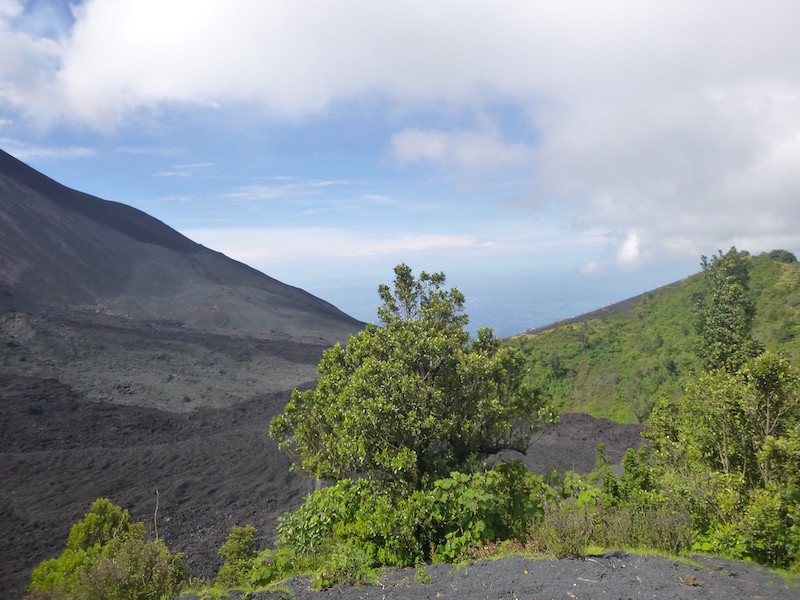 Unfortunately this photo didn’t turn out well. Behind the big tree in the center, you could see all the way to the Pacific Ocean, about 20-25 miles away.

Volcano day for me was also Election Day for Guatemaltecos. In Guatemala, if no one presidential candidate receives 50% or more of the vote, then the two candidates with the most votes move to a run-off election in late October. With twelve candidates on Sunday’s ballot, it was clear that there would be a run-off. It appears that the October election will be between Jimmy Morales, a comedian (yes, that’s right) with no prior political experience and who has the highest vote count at 24%, and either Manuel Baldizon or former first lady Sandra Torres, who as of now, with 97% of the votes counted, are within 1,000 votes of each other.

My current plan is to leave Wednesday for El Salvador. Unless I suddenly change my mind and stay for more Spanish lessons. Or head for Lake Atitlan. Or, who knows.