Up early for breakfast, and then across the street to the other hostel: Bigfoot, which offers volcano boarding down the side of Cerro Negro, a local active volcano. As usual, I’m “the old guy” among the twenty-something backpacker crowd, and Heath, our Aussie tour guide, has taken to calling me “Legend” (it sounds better than just calling the client “old man”).

There are eleven of us this morning along with two guides and a few porters who will haul your board to the top of the volcano for an extra $5. At first that sounds like an extra expense that I can avoid. Then I see the volcano an realize the hike up is enough without a 25 pound awkward toboggan in my hands.

We pile into the back of a large Mercedes truck for the one hour drive to the volcano. 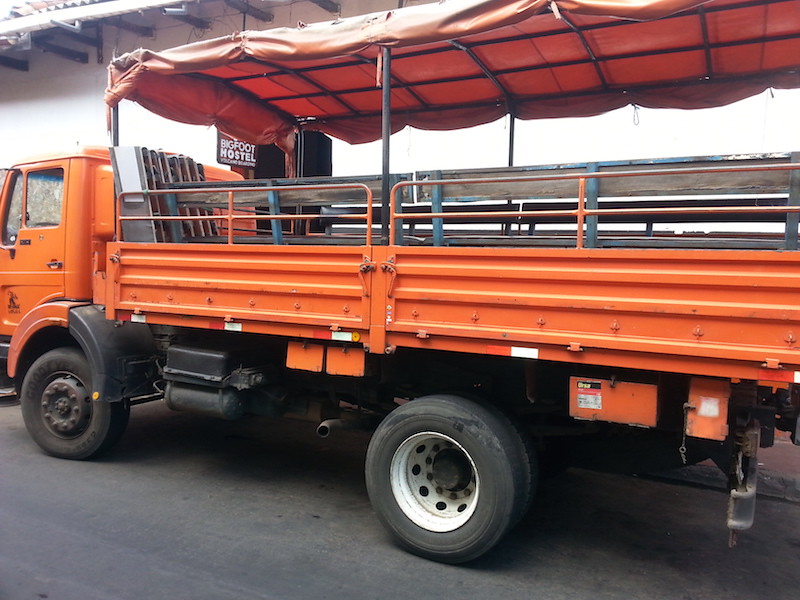 Our transportation to the volcano.

Fitting slogan on the side door.

Just outside of Leon we turn down a one-lane dirt road to Cerro Negro National Park. As we get closer, the volcano comes into view. 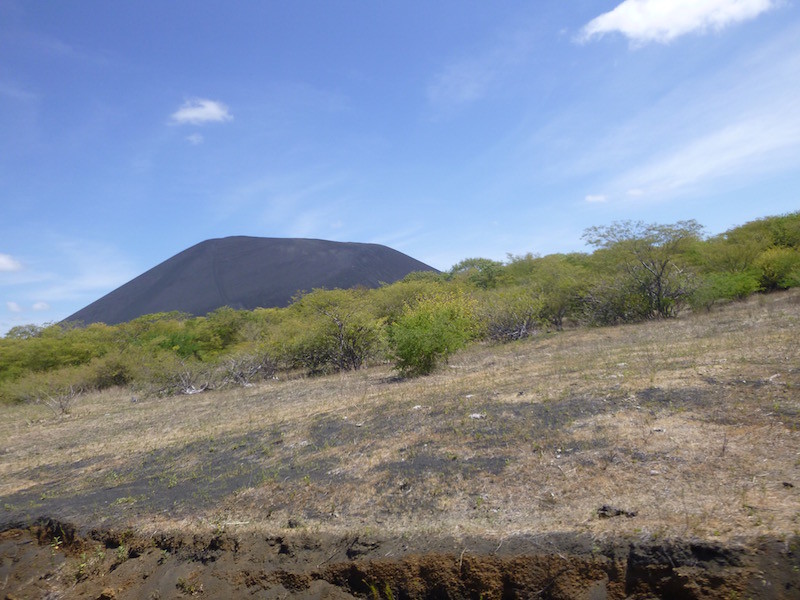 Look closely and you can see a few people running/sliding down the hill.

As with anything involving gravity, you have to go up before you can go down. The hike up the volcano is not that long, but it is loose and somewhat steep in places.

First leg of the hike up. 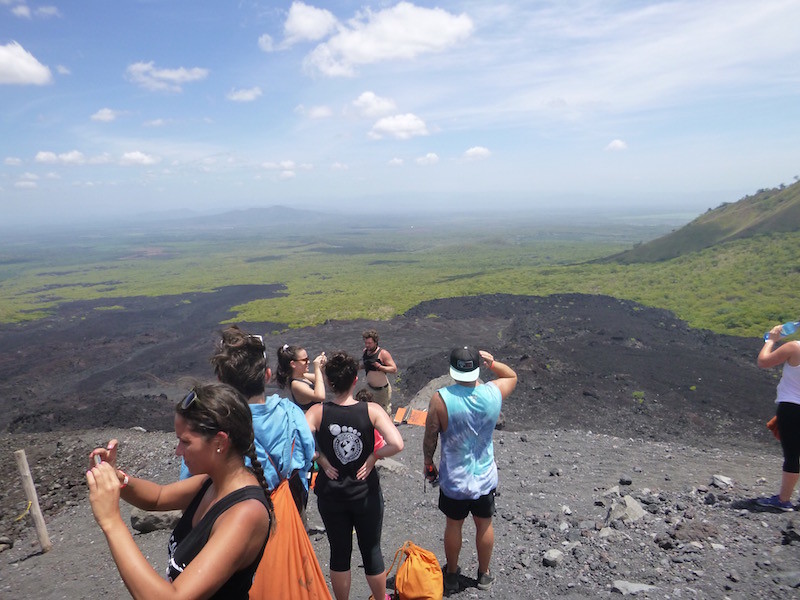 Looking out from the final rest stop on the way up.

Looking into the crater.

Suited up and ready to go.

We are on purpose-built toboggan-style sleds, for good reason. They have a metal bottom, with a slick formica surface to help slide. They were originally developed by a guy who came here trying to set a speed record on a snowboard, after Eric Barone set a speed record down this same volcano on a bicycle (I should mention that at the point where Barone hit 176 kph, his bicycle broke in half, and he spent quite a while in the hospital in Leon. He later went on to set a record of 220 kph on a bicycle down a glacier).

There was one guy that wanted to try using a snowboard rather than the sled. It turns out volcanic rock doesn’t behave like snow. He tumbled hard a few times, and by the time he got to the bottom he had a black eye and a bloody nose and said his head really hurt. This is what he looked like as he walked away from the hill: 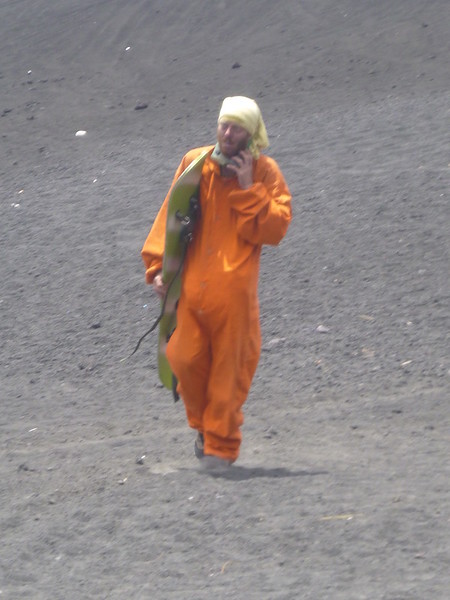 And again as we returned to the hostel:

Various shots of sledding down an active volcano at speeds of around 50kmh: 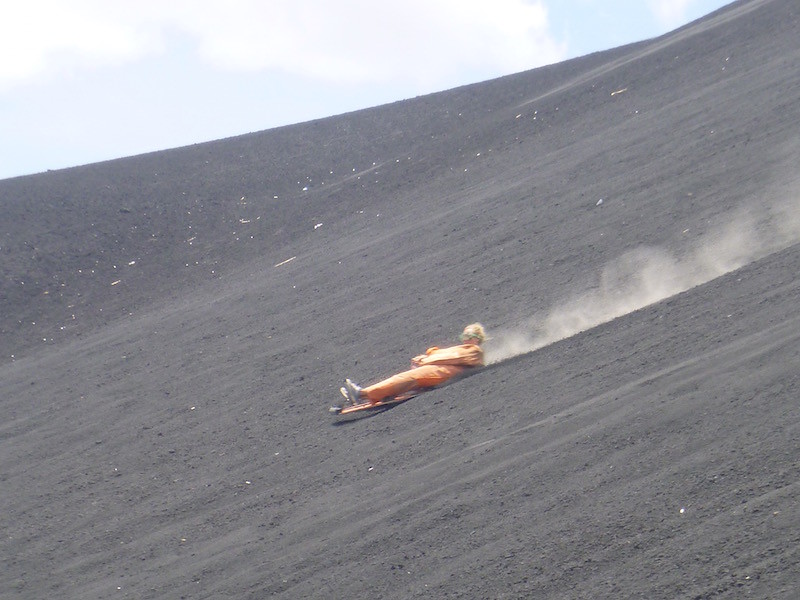 Overall, it was a lot of fun and I’d do it again. There’s definitely a lot more to it than just sliding down the hill. The ride out, the hike up, the interaction with the volcano, and then after the slide down, the ride back, the scenery, and the bar stories afterwards all add up to a fun day.

At the end of the day, I met Stan. He is one of the owners of the ViaVia Hostel in Leon where I stayed. Stan came here from a civil engineering job in Belgium several years ago, and seems very happy with the lifestyle change. 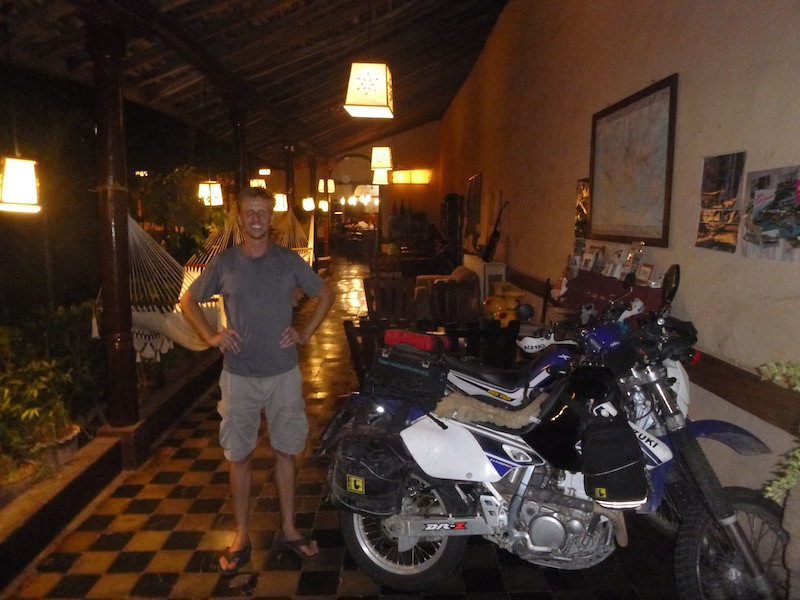 I highly recommend this place to anyone riding a motorcycle through Nicaragua. They are very supportive of motorcyclists, and made room in the main atrium area to park the bikes. Sure you have to ride through the lobby and the restaurant, but that just adds to the fun of staying here.

3 thoughts on “Volcano Boarding: Not exactly what you think….”