Slovenia is a beautiful country. Very green. And as I’ve always said, there’s a reason places are so green. It’s been raining straight since shortly after we arrived in Slovenia. The forecast is for another week of rain, pretty much all day every day. We actually enjoyed the day off yesterday after the long 450 mile day Thursday. The rain caused us to miss a couple of things we wanted to see — primarily the Vintgar Gorge — but it also caused us to just relax in the tent all day, which was nice. And especially nice was the woman on the bicycle-powered bakery cart that came through the campground, selling some great pastries for breakfast.

Unfortunately by this morning it was still raining. We waited until almost 1pm before finally giving in and packing our soggy tent and gear in the rain, and heading southwest. Rather than take the highway, I zoomed in on the Google Map, and found the most squiggly road I could find. Not the best day to be climbing the Vrisic Pass, but even in the rain and fog, it was well worth it. Tons of first- and second-gear switchbacks, sometimes without being able to see the other end for the fog and mist. Incredible views off of the mountain when the fog opened up, but the view was usually out into the a white cloud. It was eerie, like swimming in a deep clear blue sea, unsure how far down it was to the bottom.

Leaving our campsite on Lake Bled, the Pilgrimage Church of the Assumption of Maria, on an island in the middle of Lake Bled. On a cliff high overlooking the lake is Castle Bled. 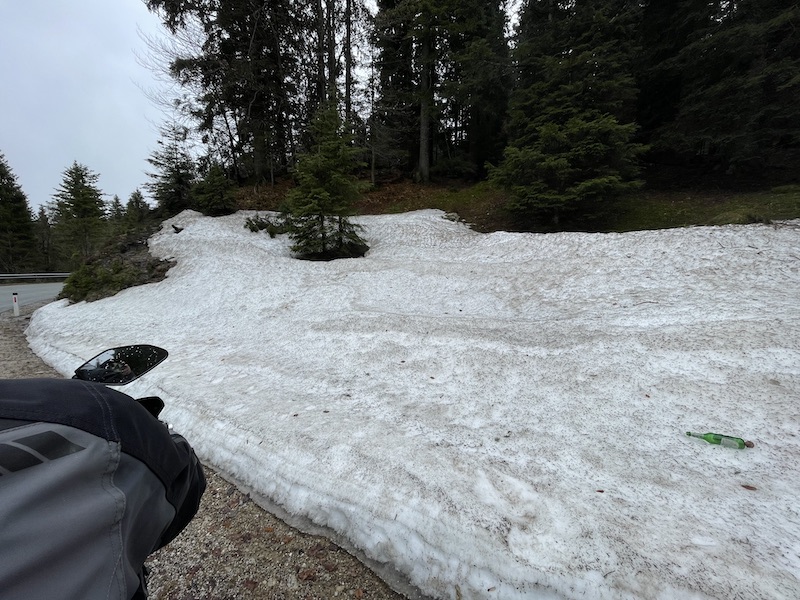 Near the top of the Vrsic Pass, the highest pass across the Julian Alps in northwestern Slovenia. The road was built for military purposes in the early 19th century and is known as the Russian Road. It was chilly, but still a great ride.

Just before arriving at our destination, the rain stopped. We pulled into our campsite in the tiny village of Vrhpolje, surrounded by vineyards. This place is sort of “off the map” but in a good way. Our friend Heike from Germany stayed here last year when she rode her Africa Twin to Slovenia, and told us we should visit. We’re glad we did.

Our tent went up quickly today…it was nice to set it up in daylight for a change, and let it dry out from two days of solid rain.

Directly across from our tent is a large vineyard. 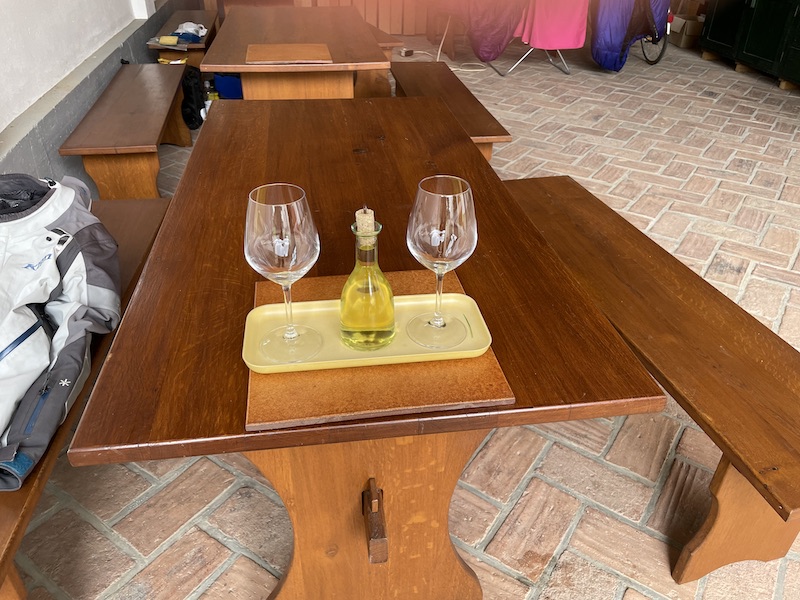 Our hosts at Kamp Vrhpolje greeted us with a welcome house wine from the local vineyard.

It’s supposed to rain again tonight, tomorrow, and for most of this week. So, who’ll stop the rain? I have a feeling Croatia will stop the rain, in a few days. But hopefully the rain will be light tomorrow morning, as we have a special tour planned.

4 thoughts on “Who’ll Stop The Rain?”