I’m getting better at reading the highway signs in Spanish. I can understand the ones that say “U turn ahead 300 meters”, “Stay right”, “Construction detour ahead” etc.

While riding this morning I passed a sign with the word “desvelados”. I wasn’t familiar with this word, but it sounded a lot like “Desperado”, so I began singing the Eagles song in my head:

Desvelado, why don’t you come to your senses?
Come down from your fences, open the gate
It may be rainin’, but there’s a rainbow above you
You better let somebody love you, before it’s too late

So much of the lyrics to this song seem to hit home right now, but I think I just like saying “Desvelado”. I finally looked it up, and it means “sleepless”, so I imagine the road sign had something to do with not driving while drowsy.

We knew we had a fairly long day from Xilitla to Tolantongo at around 170 miles, but it turns out that most of the road was extremely twisty along the mountaintop. A long section of the road reminded me of an extreme Angeles Crest, or Skyline Drive. We were doing well to average about 25mph through this section.

I’ve noticed that my Garmin Zumo GPS does a good job of estimating time of arrival based on the speed limits along the route. The problem with this is that speed limit is a small part of the equation in Mexico. The larger part is topes. Topes are speed bumps, or reductors de velocidad. Depending on the size of the village, there may be as few as two topes (one at each end of the town), or there may be one every 150 meters. Topes come in all shapes and sizes, from a fairly small rounded speed bump like you see in a parking lot in the U.S., to larger squared-off platforms, to 200mm metal domes that are nailed into the pavement at the corners with large spikes. Some topes are painted white and/or yellow. Some are camouflaged, lying in wait for the unsuspecting. For the most part, they do their job, slowing traffic considerably through towns and villages. In some places where there is a large volume of large truck traffic, things come to a complete halt as they creep over the topes. In these instances, it allows for motorcycles to overtake traffic quickly by slowing much less over the topes.

I’ve learned to add about an hour for every four hours of ETA on the GPS to account for topes.

We stopped for lunch in Jacala, at around 1800 meters elevation; lower than the ridge we had been riding. The pine forest gave way to a more altiplano high desert look again and we continued on toward Grutas de Tolantongo. 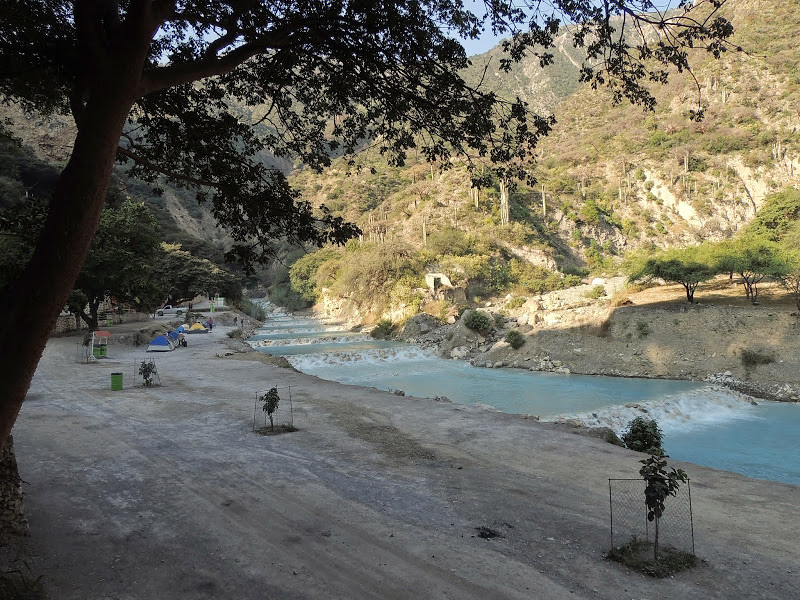 While researching Mexico for this trip, I had seen a photo online (above) of the river at the Grutas, posted by another rider. It showed their camp space next to a beautiful turquoise river. I made a note to definitely go there. It looked so peaceful, with few if any other people around.

This is what I saw when I arrived at Grutas Tolantongo: 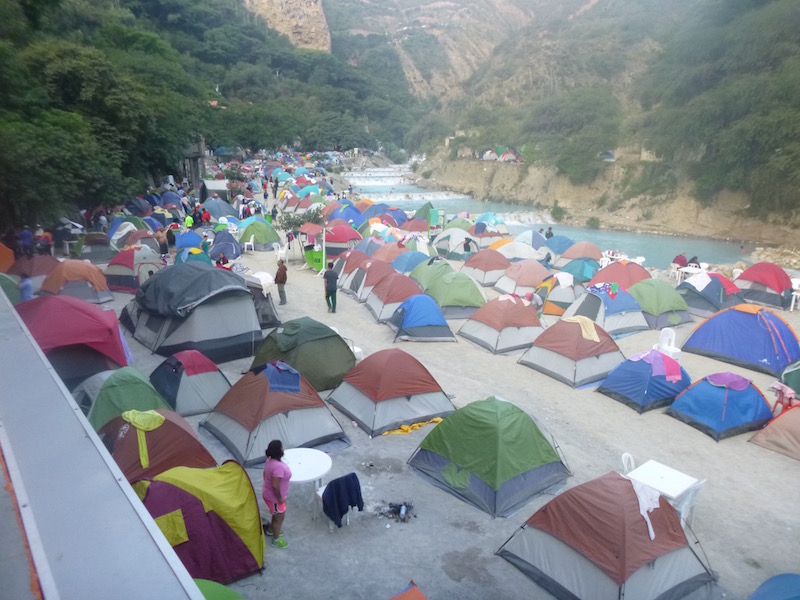 My little hermit-based brain almost exploded. Turns out Grutas de Tolantongo is like DisneyWorld for people from Mexico City and Queretaro. The photo above doesn’t begin to capture the actual mass of humanity. Without a Go-Pro on a drone, you’d never see it: I walked the entire length of the camp area, probably a little less than a half mile along the river, just to see it and try to estimate the number of tents and people. As best as I could arrive at, there was an average of 14 tents deep on the multiple levels, and probably around 2000 tents long down the river. So somewhere in the neighborhood of 25,000 to 30,000 tents, and probably around 100,000 people. Buses stage at the top of the mountain and people transfer to smaller collectivos to be transported down to the river. 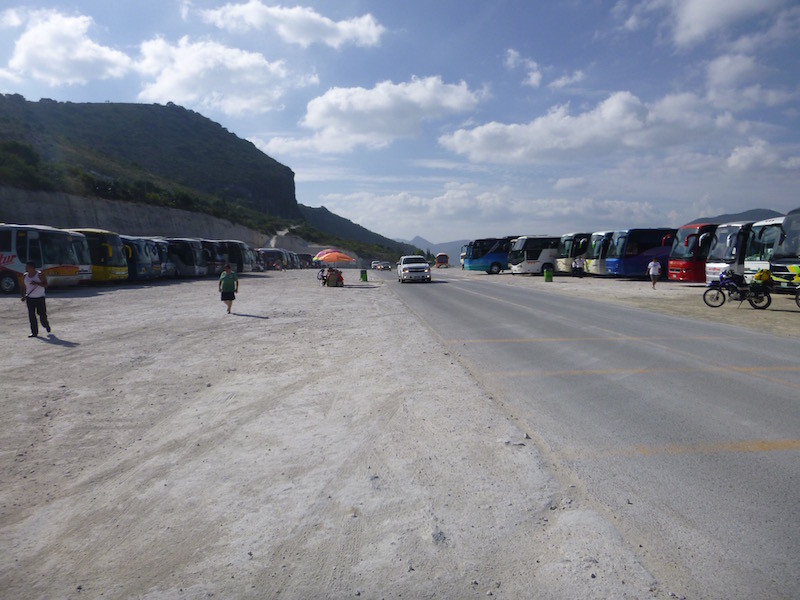 There are thousands of private cars below this point!

Those with private cars drive down the mountain as far as possible, and park on various levels on the way down, then hike the rest. There are also two hotels at the bottom. There were so many people, cars, and tents that there was no place within reasonable walking distance of the motorcycles for us to pitch our tents. We were able to find an empty car parking space, but it was behind another car. So after removing the panniers from my bike, I was able squeeze between cars and, with our front wheels against the bumper of the car, we had just enough room to pitch the tents in the parking space. 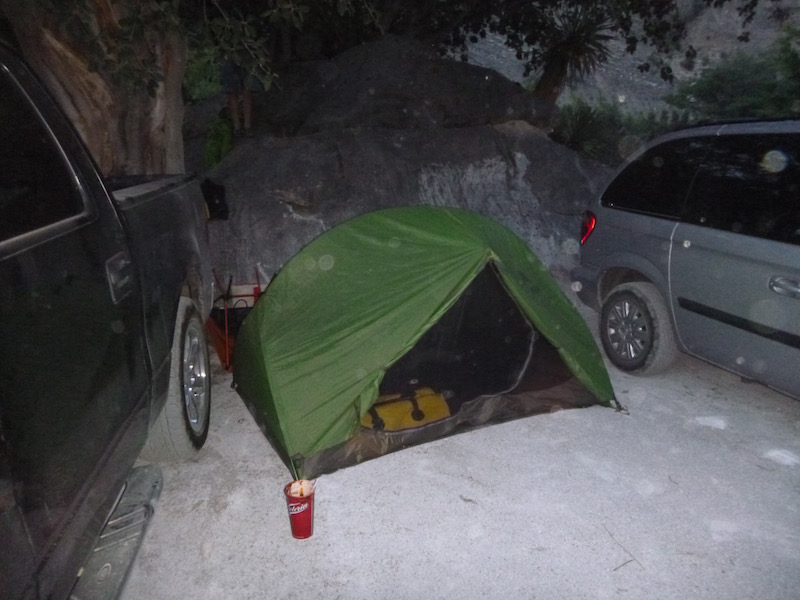 Taken before James pitched his tent.

With tens of thousands of people going in and out of the river on the weekend, the beautiful blue water gets stirred up and murky, but the next morning things had settled down and returned to its’ natural (or unnatural actually) color. 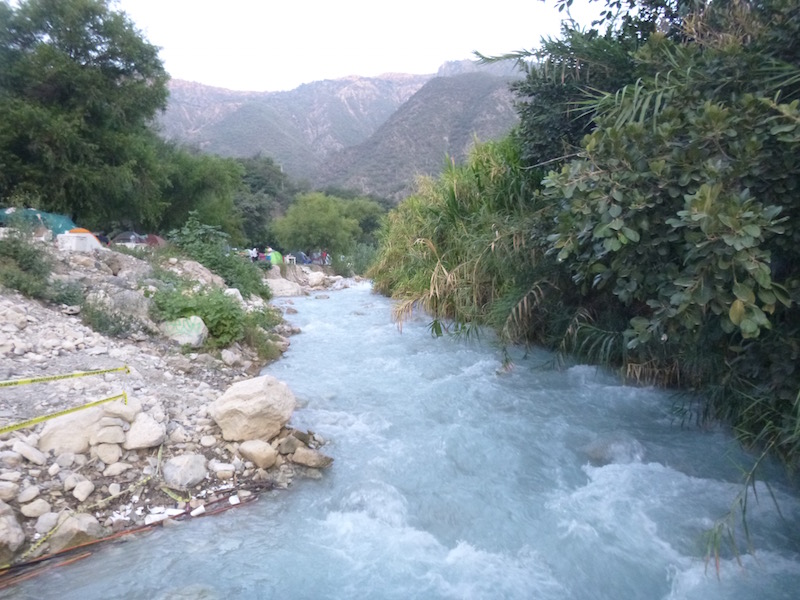 Oh, did I mention the water is really warm? Even when there’s nobody in it, if you know what I mean. There are some really cool pools further up the hill that you can hike to from here as well, but with the hordes, we decided it would be best to skip the pools and return at a later date, ON A WEEKDAY. Here’s a photo of the pools from the same couple that took the deserted photo in December:

Photo NOT taken August 2nd, obviously. If it had been, it would look like a scene from Hot Tub Party Part 3.

One thought on “Xilitla to Grutas de Tolantongo”