Never let it be said that I am not capable of doing some really stupid stuff. Yesterday is just my latest shining example.

Yesterday (Tuesday) was supposed to be “shipping day”: the day I took the bike to the airport and delivered it to the shipper. I had a 10:30am appointment at the cargo terminal. It takes just under an hour to get to the airport from where I am staying in Palermo, and I needed to get just a little gas before heading that way so I wouldn’t run out (the bike is supposed to have less than two liters of fuel in it when it goes on the plane).

I made sure the bike was sorted, packed and ready to go the night before. Tuesday morning I left about 9am, and rode a block to the gas station where I bought exactly two liters of fuel, figuring I would burn about a liter on the way to the airport.

After getting fuel, I pushed the bike off to the side, out of the way, and pulled out my waterproof zip-lock pouch with all of my documents in it. I looked at the information from the shipping broker, DakarMotos, which had the GPS coordinates of the cargo area on it, and entered the coordinates into the Maps.Me app on my phone. The route came up, I slid the pouch into my tank bag, put my gloves on, and set off for the airport.

About two miles up the road, I stopped at a stoplight. A cab pulled up behind me, honking furiously. I looked back, and the cab driver was pointing behind him and yelling something at me, but with all of the traffic noise I couldn’t hear him. I assumed I must have run a red light or cut him off in traffic, so I simply waved at him and when the light turned green, I took off.

About a half mile later, I looked down and noticed my tank bag was open. And my document pouch was gone. Massive panic immediately took over. The pouch contained the original title to my bike, my Argentina temporary import certificate, my Argentina reciprocity fee document, the shipping paperwork for the bike, and a bunch of other stuff that I can’t even remember.

I spun an illegal U-turn in the middle of an eight lane busy avenue and started splitting lanes as fast as I could to get back to where the cab driver had been honking at me. I rode in the gutter, between cars, around trucks and buses. When I got back to the street where the cab driver waved me down, I rode slowly up and down the street all the way back to the gas station, several times, looking for my documents. I kept thinking someone would see me and yell at me, waving my documents. No such luck.

Dejected, I went back to the apartment, and set off on foot to walk the entire route. I spent another two hours walking both sides of the street, looking on cars, in windows of buildings, in trash cans, everywhere I could think, with no success. Eventually, I began to accept that my documents were gone, and I was stuck in Argentina. I wasn’t sure how long it would take to get a replacement title from the US, and a new temporary import document from the Argentina Customs offices, or if that was even possible. Fortunately, I had two pieces of good news: first, I had the original Texas registration for the bike in a different pouch at the apartment, and I thought I might be able to use it in lieu of the title at Customs. Second, Sandra and Javier at DakarMotos had photocopies of my temporary import certificate, which I hoped would make it easier to get a replacement original.

I contacted Sandra, and after a long discussion with the airport Customs officials, she suggested I file a report with the local police, and get an affidavit from them advising that I had lost the documents. So after a couple of hours at the police station, and the help of Sandra’s daughter-in-law acting as translator, I walked out with the affidavit.

Meanwhile, my brother in Texas was working on getting a certified copy of my title from the Texas DMV. I was somewhat shocked to learn that I could send him an email and he could take it to the DMV and they would give him a copy of my title. For all the difficulties I usually suffer at the DMV, this seemed way too easy. Perhaps they felt sorry for me? Nah, it’s still the DMV.

I went to bed with the bike still in the garage…it should have been on a plane or at least in the cargo area at the airport. I couldn’t help but think of all the things that had to be addressed now: besides documents, there was local logistics (I had to be out of the apartment by Friday morning, as new renters were moving in, and now I had two large roller bags with all my stuff packed in them that wouldn’t fit on the bike); travel logistics (I was going to miss my flight Thursday night, and I wouldn’t arrive in Cape Town when I was supposed to, so my hotel reservation needed to be changed or canceled); and bike logistics (what if I exceeded my time limit in Argentina waiting on documents? I had no document to allow me to exit the country with the bike and then return to start the clock over).

It’s amazing how quickly the stress level can rise after months of virtually no stress. Eventually I took a deep breath, sat down and made my “to do” list, and got to work.

Sandra and Javier are experts at shipping bikes into and out of Argentina, and I was not the first person they had dealt with who for one reason or another didn’t have a full set of documents. After exchanging a few texts, Sandra agreed (for a small “Stupidity Fee”) to meet me at the airport Wednesday morning with the remaining copies of my documents that she had, along with the registration and police affidavit that I had, to see if we could convince Customs to accept what we had and allow me to ship the bike.

After four hours, and another hand-written statement explaining what had happened, I was allowed to take the bike into the freight warehouse and put it on the pallet. Things were once again moving forward!

Before putting the bike on the pallet, I rolled it onto a freight scale. The fully loaded bike, with everything except my camping gear, weighs 174.5 kg, or 384 pounds. For reference, an unloaded BMW 1200GS weighs 260kg, or 573 pounds dry, and a stock KLR650 with no luggage weighs just more than my fully loaded bike, at 176 kg claimed dry weight. 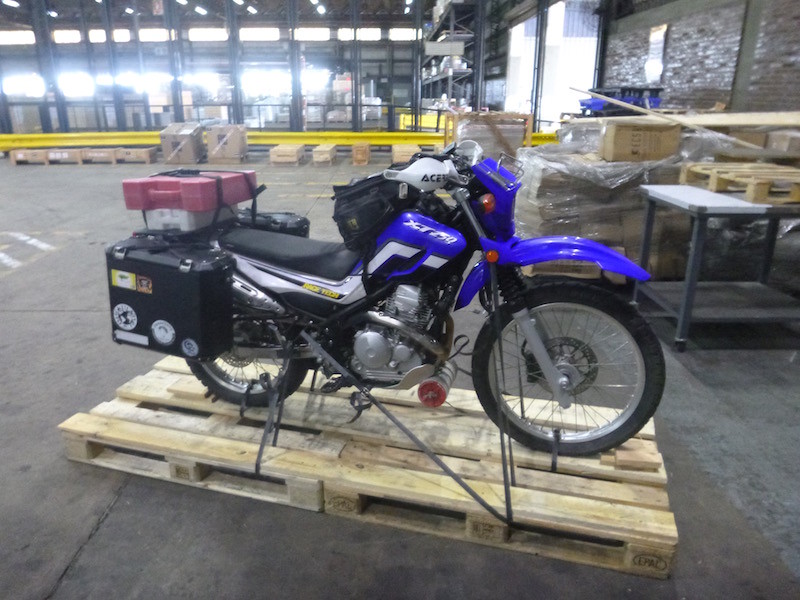 Bike going onto the pallet…

It’s definitely getting real now. This is the first shipment for the bike with the exception of the Stahlratte; I’ve ridden it everywhere until now. It’s a lot farther to ride home from Africa than from Argentina.

One more day in South America, then a very long flight to South Africa.

8 thoughts on “You Can’t Fix Stupid, But Fortunately You Can Find Ways Around It”