We loaded up the bike in Dubrovnik for the slog up the toll road to Zadar. Before leaving, I had to pay our host for the two nights, in cash, and I didn’t have enough, so once more I hiked down the hill to the ATM to get kunas. Although it was early, it was already humid, and I was soaked by the time I got back to the apartment. Oh well. 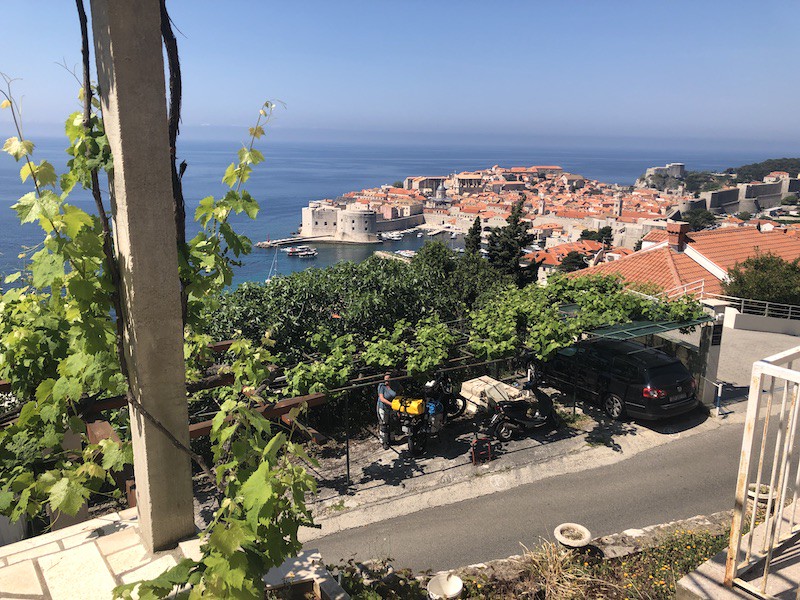 Diana finishes loading the bike as I take one last photo from our terrace.

And one last panoramic photo from a little higher up, looking out the window of our host Marija’s home. I’m already missing this place. It was so relaxing.

The toll road headed north from just after the Bosnia crossing reminded me of the 241 Toll Road that runs along the eastern edge of Orange County in southern California. There are few buildings or towns, and it’s mostly rocky hills with scrub, but a very nice divided four lane road with a number of tunnels through the hills. Unlike the SoCal toll road, this one was a little under $9 to go about 160 miles.

A little further north, it begins to look more like Highway 99 just north of Bakersfield; you can see the mountains in the distance on either side, but you’re sort of in the valley between, and headed straight. Unlike the 99, the “mountains” on our left were actually islands just off the Adriatic coast. This became more obvious as we turned west and headed down into Zadar.

Nothing against this sea town, but after Split and Dubrovnik, it’s just not quite in the same category, though it is a beautiful town in its’ own right. One of its’ main attractions is the Church of St. Donatus, built in the early 9th century on the ruins of an ancient forum. Literally ON the ruins. It’s amazing to see the broken antique columns, pillars, and stone beams from a previous era that were used as the foundation materials for the church. Among these filler materials are even remains of a sacrificial altar and the base of the statue of a deity with an inscription dedicated to the goddess Juno and the the supreme deity Jupiter.

The Church of St. Donatus, built on an even older forum.

As we approached the church, it was obvious that the underlying foundation was bits and pieces of a former empire. While the church was interesting, the method of building the foundation fascinated me more.

I guess the materials were readily available, but it sure makes for an uneven first layer of stones.

Maybe it was just the opportunity to snub the former people and their architecture? There are still pieces of some of these columns standing outside at the edge of the forum, but it had to be a lot of work to cut them to length and lay them in place.

A little further along the seawall is the Sea Organ. This experimental musical “instrument” is really an art installation that was built into the sea wall in 2005. Marble steps allow visitors to sit above the organ and listen to the “music” as the waves move the large tubes under the sea wall. 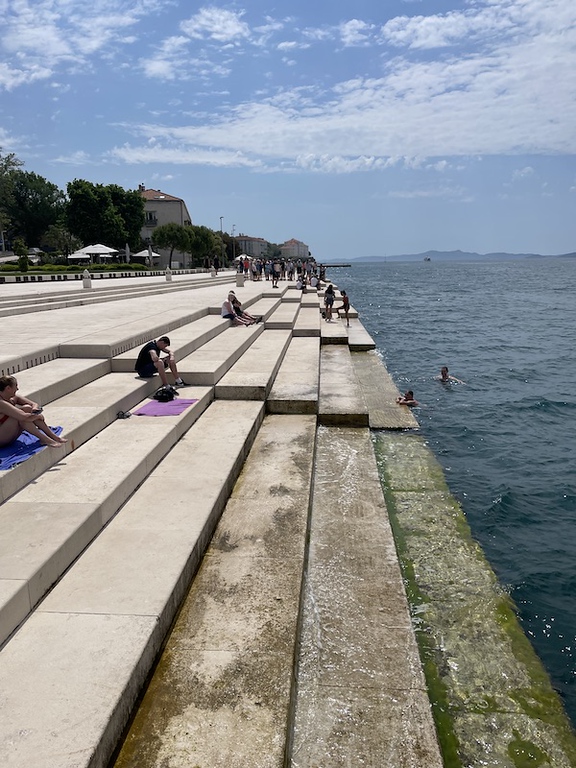 The Sea Organ sits under these steps, and is played by the waves hitting the “pipes”. Pretty small waves when we were there, which resulted in some deep notes that sounded to me more like the background music from an Alfred Hitchcock movie.

Next to the Sea Organ is the Greeting to the Sun installation. This 22-meter diameter solar installation has 300 multi-layered glass panels with solar panels within it. At night, a computer-generated light show is presented from the panels.

Around the polished steel ring of the Greeting to the Sun installation are inscriptions, one for each of the 36 saints for whom a church in Zadar is named. Next to each Saint’s name is the date they are celebrated, and the sun’s coordinates on that particular day.

On our way back to the bike after visiting Old Zadar, we just happened to stumble on the “Tuna, Sushi, and Wine Festival”. It was lunch time, and this was a no-brainer: for about $4.75 each, we each had a large tuna steak drizzled with olives and a mediterranean sauce, a dinner roll, and a glass of wine.

I think the last time I had a tuna steak that large in the US with a glass of wine, it was about $45. So, applying US prices to the meal, that means our lodging for tonight is basically free. 🙂

Next to the Tuna Festival was a Toyota display, with the new Aygo X model that I keep seeing billboards for. I really like this car. It’s a hybrid, typical European model with a 1 liter engine and 6-speed manual transmission. The base model is a little over $13,000 here, and the one in the photo (fancy wheels, nicer interior, not sure what other add-ons) is about $20,000. The Highlander next to it, on the other hand, is $69,000. Uh, no thanks.

The Sea Gate, one of the entrances to the old walled city, built in the 1500s.

As in Split, and Dubrovnik, there’s a lot of money sitting on the water here.

Tomorrow we head a bit further north to our last stop in Croatia.