There are 18 motorcycles on the Stahlratte in Cartagena harbor. There are 23 of us spread around several hotels and hostels in the Getsemani district, just outside the walls of the Old City. This is an interesting place: the odd combination of backpacker tourists and red light district. During the day it feels like most other old Latin American cities I’ve been in over the past couple of months. At night it’s a little different. Not uncomfortable. Just different. 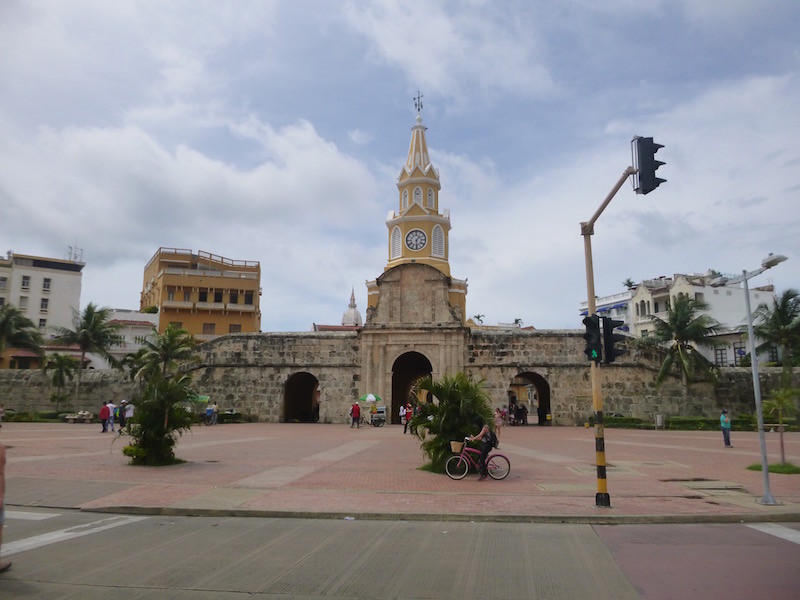 Entrance to the old walled city. 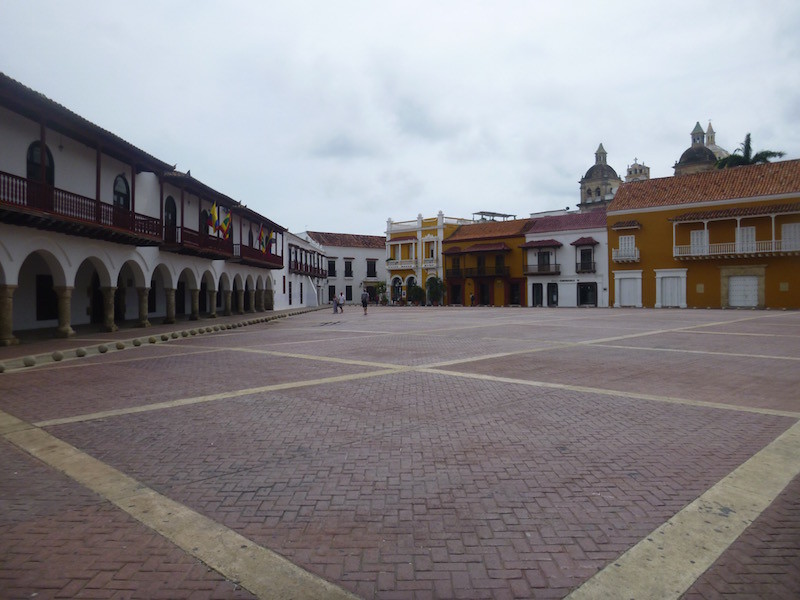 Monday is a holiday in Colombia…believe it or not, it’s Columbus Day, just like in the U.S. Almost everything is closed for the day, and the crowds are non-existent, until the cruise ship pulls up. 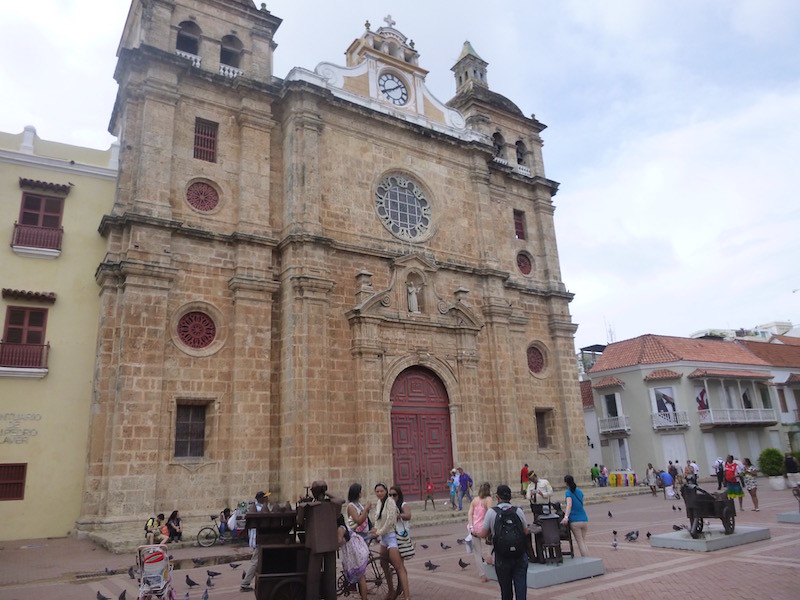 The pigeons were unaware of the holiday. 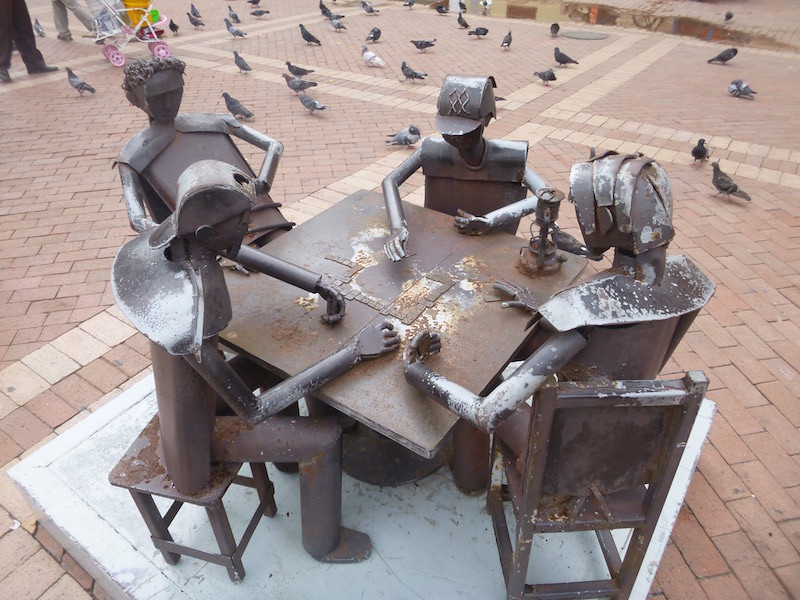 So were these guys playing dominoes. Longest. Game. Ever.

That old Colonial feel…again like the French Quarter in New Orleans. 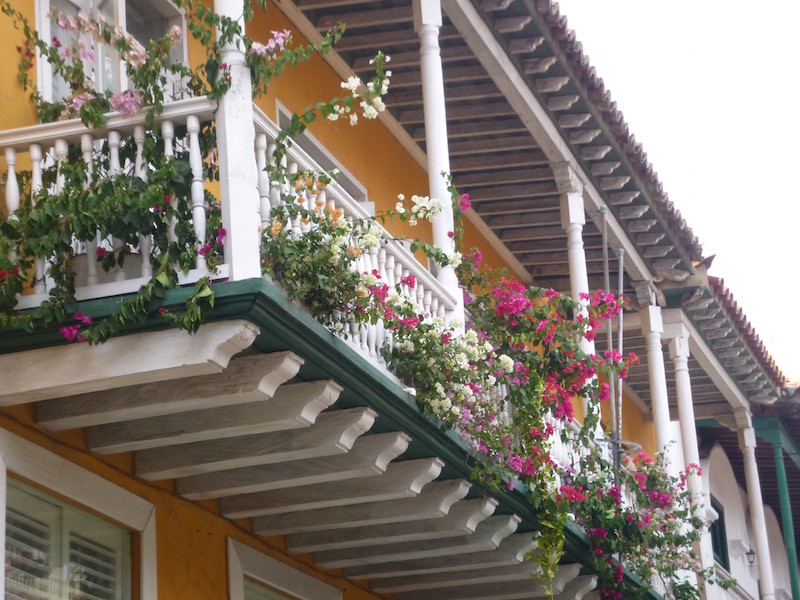 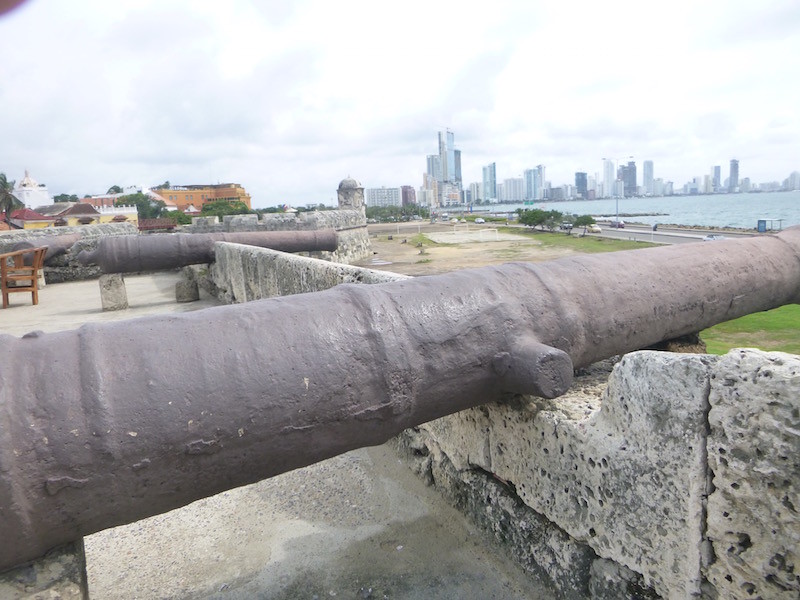 My sense of humor. Love it. 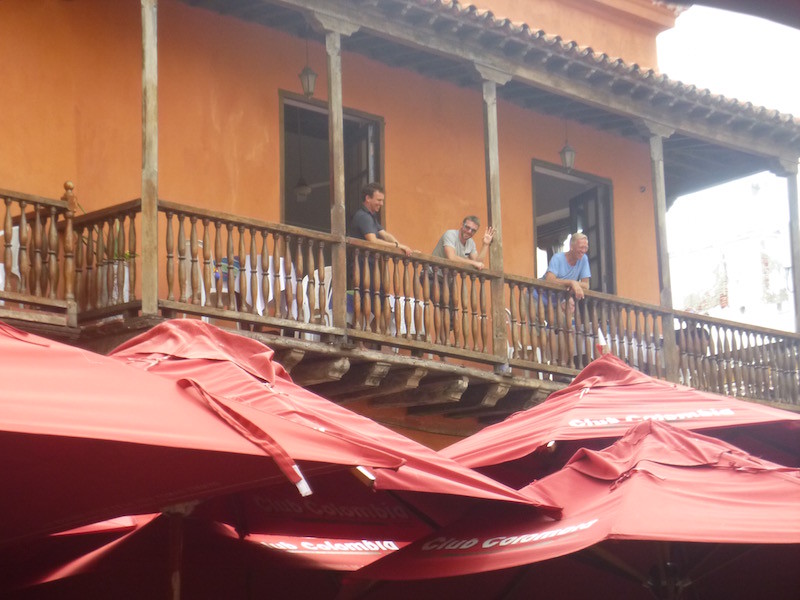 Sitting at a sidewalk cafe and happened to look up, and there’s a bunch of the guys from the Stahlratte…

Another indicator that a place is too touristy for me…

Castillo de San Felipe. This sets a new record for me for the total number of rocks glued together in one place.

The morning after arriving in Cartagena we catch taxis back to the harbor at 6am to begin unloading the bikes. They are taken off the ship six at a time and placed on a large flat barge, then motored to shore. We’re instructed to take only our helmets and boots and to leave the rest of our gear onboard for now. We are headed directly to DIAN (Aduana, or Customs) to have the bikes officially admitted into the country.

It’s a short six block ride to Customs. They open the gate at 8am and we file in. By 9am we have our bikes inspected and are told to return at 2:30 to sign the paperwork and pick them up. This would take a couple of hours if I was traveling solo, but the sheer volume, combined with the official government work pace, requires a bit longer today. So it’s back to the hotels for a few hours to wait.

At 2:30 we’re all back and within a half hour we’re all officially legally in Colombia and free to go, although we still have to buy SOAT, the mandatory insurance, which costs about $30 for 90 days. It turns out the nearest SOAT office only sells motorcycle insurance between 8am and noon, so that will have to wait one more day. We leave DIAN as a group and head back to the docks one more time, to retrieve all of our gear from the Stahlratte. It takes three trips with the dinghy to bring all of the panniers, tank bags, riding gear, etc from ship to dock.

We meet up for a couple of evenings at the Mamallena Hostel on Media de Luna street (come to think of it, a very fitting name for the main street through the red light district) for drinks and to swap travel stories. It’s definitely an interesting group, and everyone has a different reason or plan for their trip. Most are traveling much faster than I am, as their goal is Ushuaia — the southern tip of South America — and most only have until the end of the year before they have to return to jobs. A few of us are going further, and the same people seem to be traveling slower. I find that John and Bev (British couple on XT600s) are on a similar pace and we discuss the possibility of shipping to Africa together in March. There is no doubt that several of us will cross paths again on the way south.

Most leave Wednesday morning headed straight for Medellin — a two day ride. The few stragglers that stay behind another day meet up again at Mamallena, and as I walk through the lobby, there are two blue KLR650s parked there. It’s the two Canadians that I met on the ferry to Ometepe Island in Nicaragua, and again in Boquete, Panama. They have just arrived on the Wildcard, a smaller sailboat.

The Gringo Trail continues to funnel motorcyclists through the same areas.