Yesterday I tried to go to Table Mountain and ride the aerial tramway to the top for a look around. Unfortunately, the wind was blowing like I was back in Patagonia, and the Tram was closed due to weather. So instead I rode up to the top of Signal Hill, which is near Table Mountain, and took in the views of the city from there.

Looking across at Table Mountain from Signal Hill. 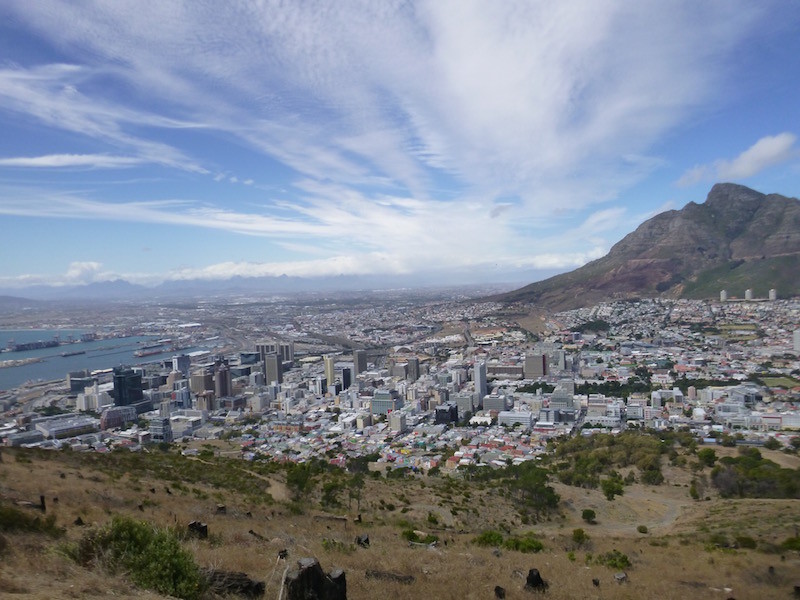 Today I played tourist and ticked off a bunch of places to see and things to do on the Cape Peninsula south of Cape Town.

I started by heading towards Table Mountain again. After checking their website, I decided to pass on the cable car ride to the top, for two reasons: first and foremost, today is a holiday, and there are tons of people there; the website said there was a two hour wait at the bottom to board the tram. Second, it’s a bit pricey at 240 Rand, or a bit over $15, just to get a view of Cape Town from higher up. Yesterday I rode to the top of Signal Hill and the view from there was good enough for me.

So instead of going to the west side of Table Mountain, I rode down around the east side, and then around to Hout Bay. The traffic this morning was a bit worse than normal due to the Two Oceans Ultra-Marathon that is taking place tomorrow. As a warm-up, there were several different “fun runs” this morning. Several roads will be closed tomorrow, and all along my route today I saw television cameras being set up on platforms alongside the road. I’m thankful that I was able to do this trip today and didn’t accidentally stumble into that mess tomorrow.

On the way to Hout Bay, a car pulled alongside of me at a light and honked. Having learned my lesson in Buenos Aires, I decided to see what he wanted, so I moved over a bit and let him pull alongside. The passenger window came down, and the woman on the passenger side asked, “Are you really from Texas?”

“Are you riding around the world or something?”

It was cool to meet someone randomly in traffic from “home”. I didn’t get to speak to them for long, but it appeared that perhaps they were here for a bit longer than a week’s vacation. 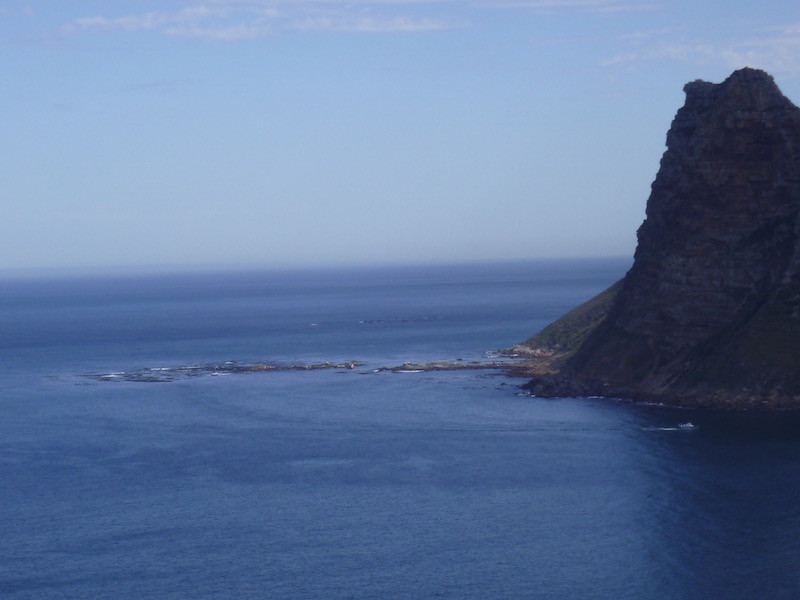 There’s a small island just outside of Hout Bay with a large colony of Cape Fur Seals. You can take a boat ride to the view the seals, and it’s relatively inexpensive. I would have done it, but between the marathon crowds and the holiday weekend crowds, I decided to skip it. I plan to see a lot more “fur” later on in Africa.

Just past Hout Bay is a spectacular road along the coast called Chapman’s Peak Drive, or simply “Chappie” by the locals. 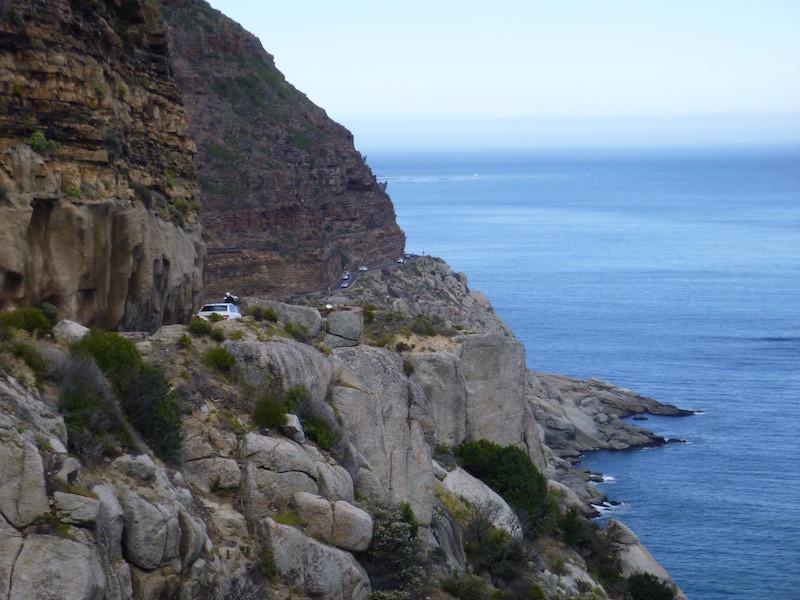 Chappie ends at the town of Noordhoek on the south end. From there the road splits, and I chose to head further south to Scarborough before turning east and cutting across the peninsula to Simon’s Town. 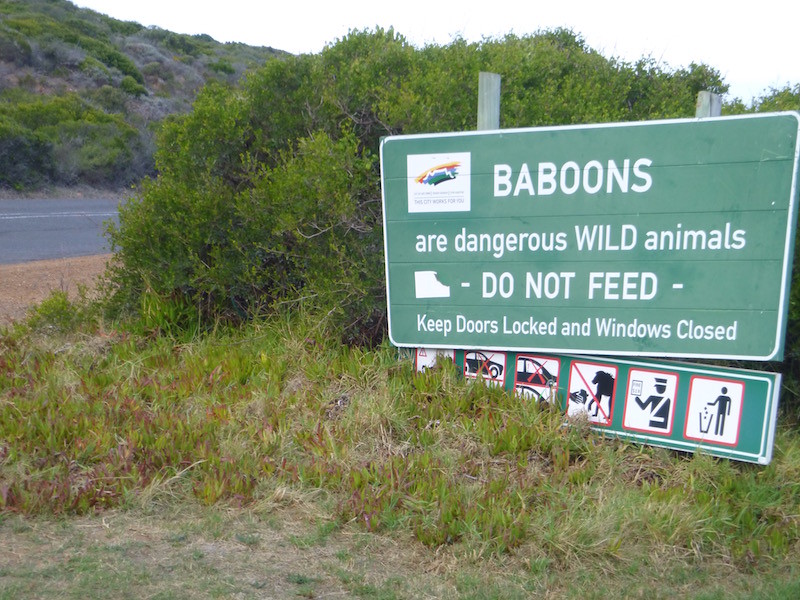 Toto, we’re definitely not in Kansas any more…and by the way, how do I roll up my windows and lock my doors on this bike?

Yep. Not Kansas. Or Texas.

Simon’s Town is a quaint little seaside village that has become quite a tourist draw. The South African Navy is based here (both ships, from the size of the harbor…just kidding), and just south of Simon’s Town is Boulders Beach, which is home to a colony of 3,000 African Penguins. These penguins used to be called Jackass Penguins, due to the donkey braying sound that they make, but somebody decided they needed a more attractive name, so now they are known as African Penguins, and are the only penguins that breed in Africa. 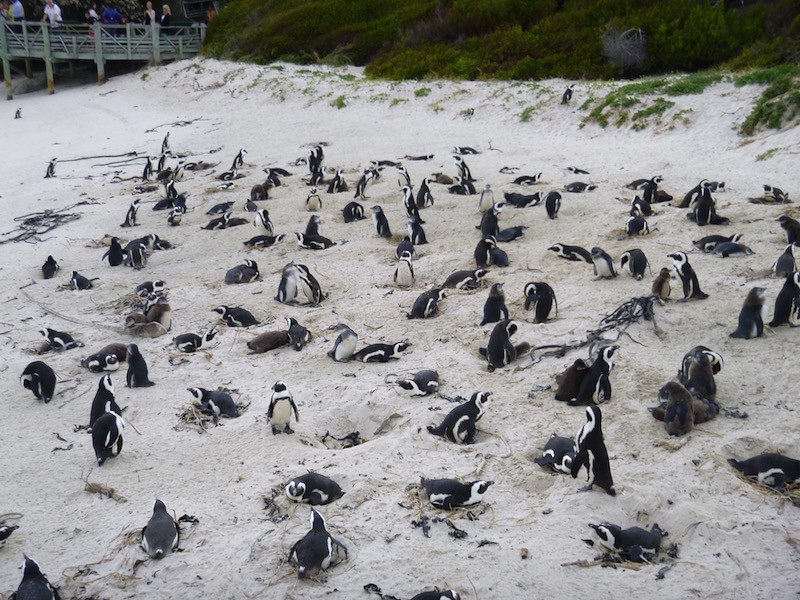 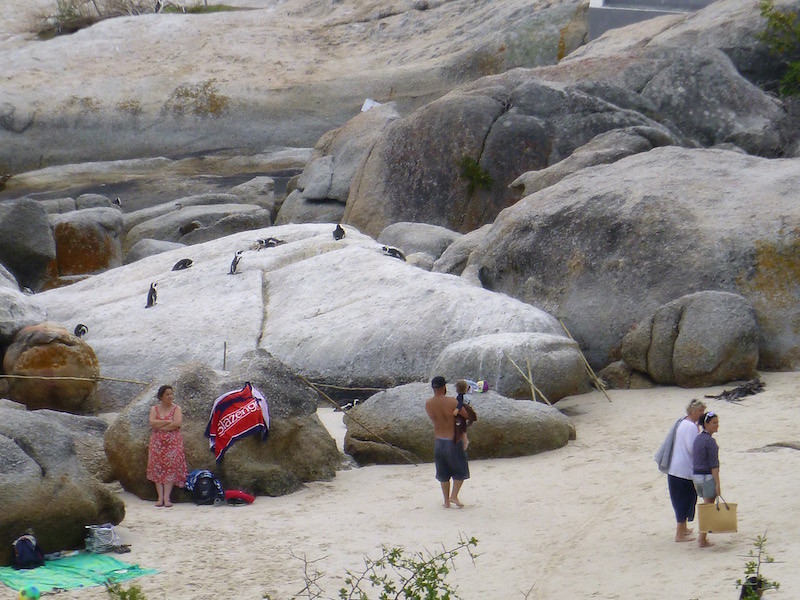 Penguins, on the rocks. Shaking, not stirred. 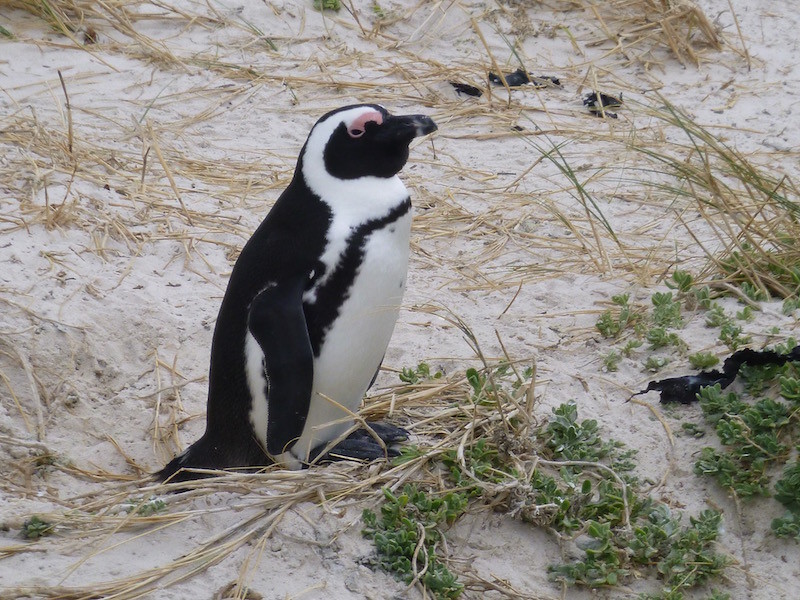 Young ones, molting. These penguins change their feathers once a year, and it takes 21 days to do it. During that time, they can’t go in the water, so they have to eat a lot before hand, then starve themselves for three weeks. 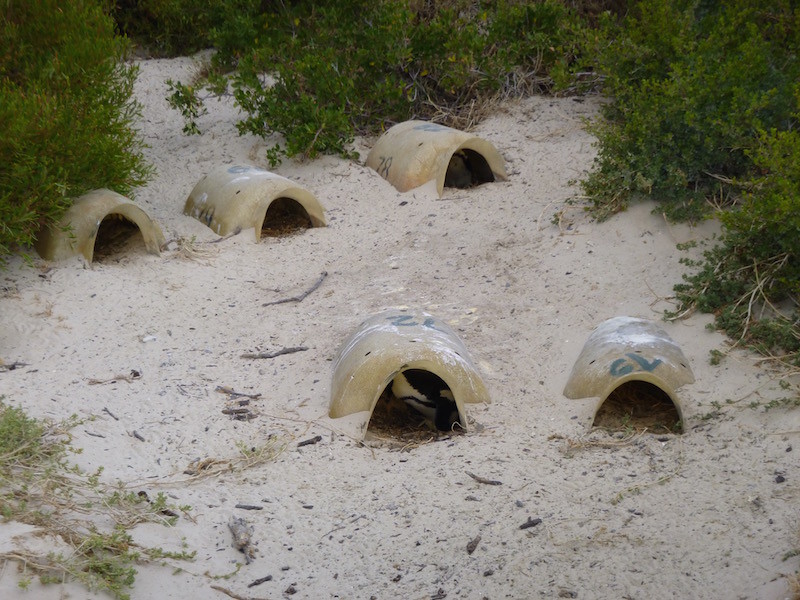 Unlike in Ushuaia, these penguins are provided fiberglass “nests” which they seem to have adopted without a problem.

As I was walking back to the bike after visiting the penguins, I noticed a family standing around my bike. When I approached, one of the gentlemen asked, “Yours?”

We had a brief conversation about my travels thus far, they wished me luck, and off they went.

Heading back up the east side of the peninsula, I stopped at Kalk Bay for lunch at Kalky’s Fish & Chips. As I was walking to the restaurant, a couple walked up next to me.

“We saw the foreign plate on your bike. Where are you from?”

Another brief conversation about my travels, then off to eat. I’m enjoying meeting people, and I seem to stand out more here than in Latin America. It could just be the license plate — South African plates are much larger and easier to read — or it could be that I’m the only person on a small bike. BMWs are clearly the bike of choice here. Whereas in South America, I could spot another long distance traveler a mile away by the large BMW and panniers, here in Cape Town nearly every bike you see is a GS, and they’re about 99% locals. Of course, there’s also less of a language barrier to keep people from approaching me here; many people speak English, although it is only the fourth most spoken language of the eleven languages in South Africa (Zulu is the most common, Xhosa is second, and Afrikaans is third; many people in the neighborhood I’m staying in speak Afrikaans primarily, and English second.) 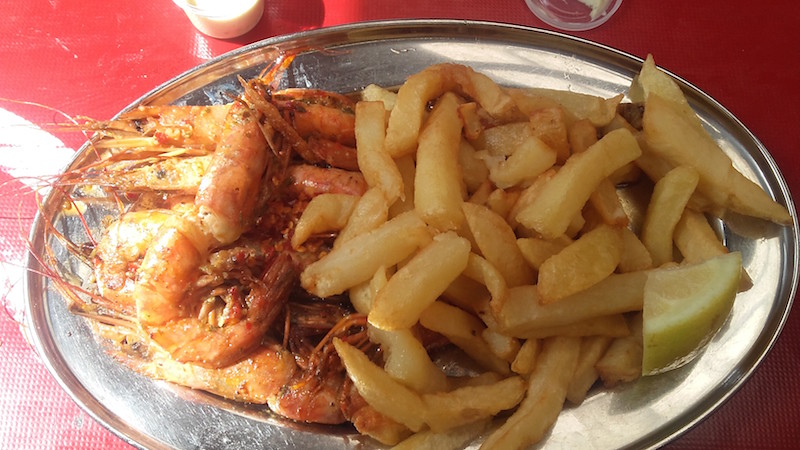 Lunch at Kalky’s: Prawns & chips, and a fizzy. In the States, this would be shrimp & fries, and a soft drink. Very messy, very spicy, and very delicious.

After a bit of clean-up, I was back on the bike and headed to Muizenberg Beach. 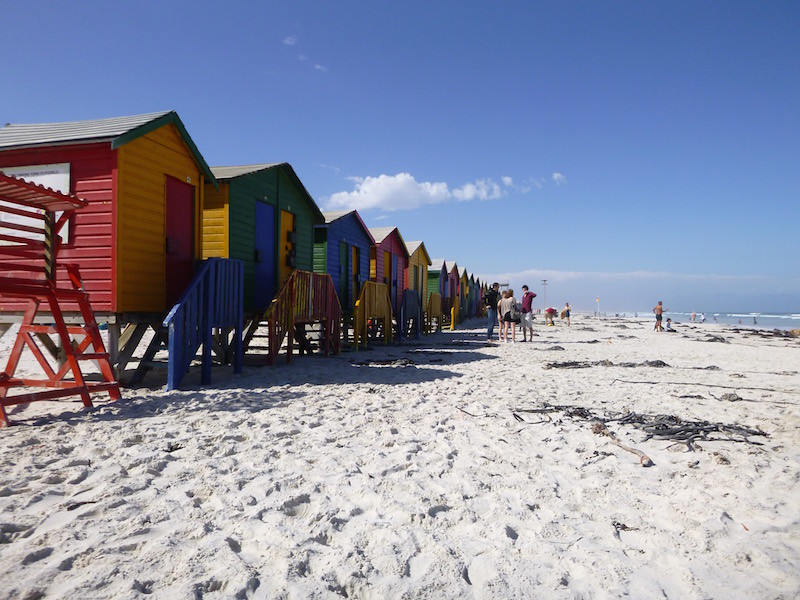 My tour of the peninsula complete, I headed back “home”. On the way, I passed a large sign on the freeway. I couldn’t stop to take a photo of it, though I wish I had. It said “Warning! Average Speed Prosecuted”. I’m still trying to figure out exactly what this means. Does it mean they only prosecute average speeders? Or does it mean that if I go through the first speed camera at 140 kph, and the second speed camera at 60 kph, I only get charged for 100 kph, which is actually under the limit? Not sure I want to test it…

8 thoughts on “A Loop of The Cape”