It poured down rain all night. I stayed dry in my tent, though for the first time I had a little drip where the fly and tent touch the main pole. It stopped after a bit and never really became a problem. I slept really well, other than occasionally having to peek outside to make sure the river wasn’t rising too fast. I knew when I went to bed it was about four feet lower than my tent. It rained a bit over an inch during the night. So I didn’t float away.

It continued to rain on and off until about 10am, when the sun peeked through the clouds long enough to dry the rain fly and footprint of my tent and get everything packed. I headed for the coast, to the town of Strand, then followed the coast road to Betty’s Bay and Hermanus. The road to Hermanus from Strand is another one of those epic coastal roads, just hanging there over the ocean. With the front that blew through last night, the wind was howling and the seas were really churning. Waves looked like they would crash and stop, the wind forcing them back and not allowing any further forward progress. Like Chapman’s Peak, this is a road I could ride several more times just for the scenery. 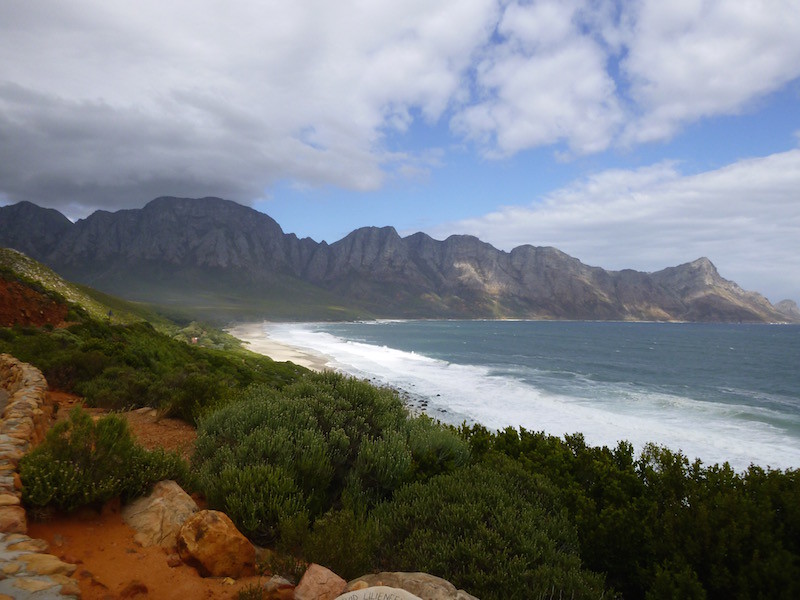 The coastal route runs right along the edge of the mountains here. Spectacular! 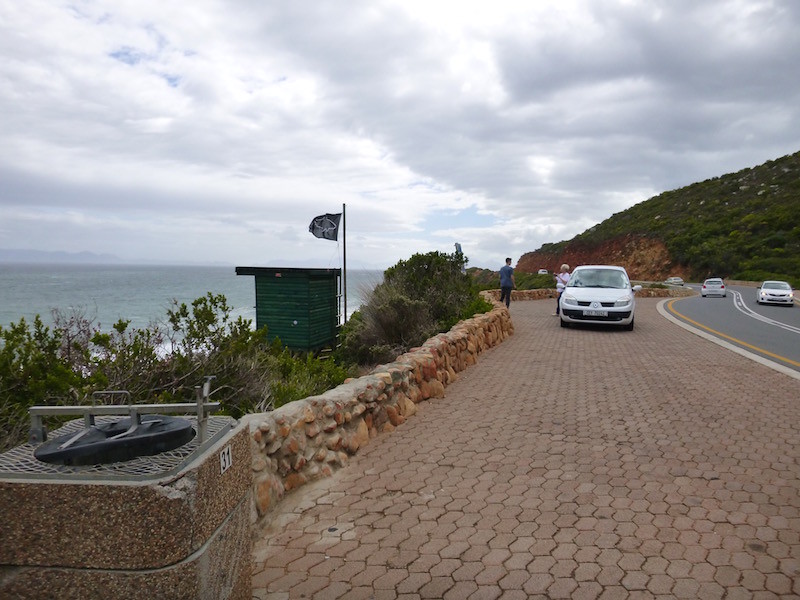 Not sure if the black flag with the shark on it is truly a shark warning for surfers, but I don’t want to find out.

Beyond Hermanus I turned inland and really fought the wind. At one point I found myself fighting hard to stay on the road at 28mph. Any faster and I couldn’t keep the bike in the lane. A large dust storm blew across the road for about a mile, reducing visibility and making it feel like the front tire would slip out from under the bike at any moment. It was worse than anything I had experienced in Patagonia.

Eventually I made it to Cape Agulhas, although I have to admit that for the last ten miles I was seriously questioning if it was worth it. The whole reason to go to Agulhas is like going to Ushuaia: it’s the furthest point south on the African continent, and of course I just had to have the photo. But getting there made getting to Ushuaia look easy. It’s not always like this here; I just picked the worst possible day, just after a strong front passed through.

I made it to the lighthouse, and then down the dirt road to the southern-most point of Africa. When I got there, the wind was blowing so hard that I couldn’t get off the bike to take the photo. Eventually, somebody wandered up and asked if they could help take my photo, so I handed them the camera and then asked them to hold the bike while I got in position to take a photo of the bike with the sign. “Okay, let go NOW!” Snap. Grab. A lot of work for a photo of a sign that isn’t even AT the southernmost point, but 150 meters away. (Had there been nobody else there I would have ridden the last 150 meters down the boardwalk and taken a photo at the actual end point, but this is as close as I could get with the bike as it was.) 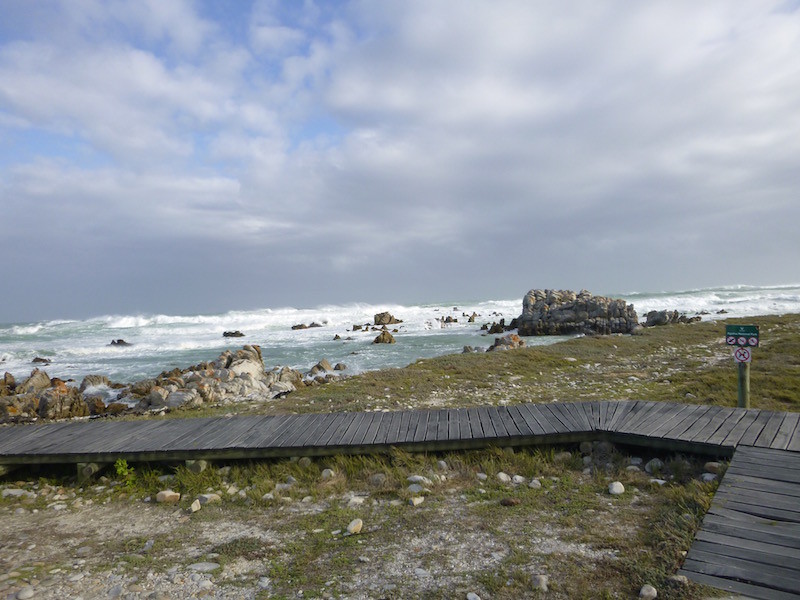 Ok, that’s it for “south”. Time to start heading north.

I had planned to camp at a caravan park in Agulhas but it’s just a big grass lot a block from the ocean, and I was afraid the wind was too strong for my tent, so I began to look for a place to stay. Unfortunately it’s Easter Sunday, and everything in town was booked. I stopped at several places, and at one the couple who own it called around for me, confirming that nothing was available.

Ugh. Into the wind….always point it directly into the wind, not at an angle.

While waiting for the couple to check on alternative lodging for me, the wind managed to blow my bike OVER the kickstand and onto the ground. First time I’ve had that experience. I knew when I parked the bike I should have pointed it into the wind, but at the time there was a lull and I thought I could make it.

I resigned myself to trying to pitch my tent at the caravan park. When I got there, it was closed, and there was a sign that said their Sunday hours were until noon, and listed an after-hours number to call. I fished my phone out of my pocked and started to dial, but before I could finish a woman walked up and asked if I was looking for accommodation.

“Have you tried the Backpacker Hostel?”

“They have camping also.”

Well, that decided it for me. I got back on the bike and rode back across town to the hostel. The guy at reception was very nice, showed me a great place to put my tent with good wind protection, and gave me a tour, including all the amenities available to me even though I was just camping. Hot showers, free coffee and tea 24/7, swimming pool. All for 80 Rand, or five dollars.

The wind is supposed to die down tomorrow. I hope so. I’m not sure I can get out of this town otherwise, as it will be worse heading the other way. Tomorrow will be a long day, with or without the wind, but I’m looking forward to more spectacular scenery. And I’m only a couple of days away from large animals!

7 thoughts on “Am I Back in Patagonia??”