I had applied online for my “E-Visa” to Kenya, and received it about a month ago. On the application, they asked the date I planned to enter Kenya, and after some guess-timation, I put May 15th. I was actually slightly ahead of schedule, but a couple of rest days along the route in Tanzania, along with the trip to Ngorongoro Crater filled my time and I ended up right back on schedule.

I spent one last night at Meserani Oasis Lodge in my nice comfortable $11 room, and then said goodbye to Mama before heading north. 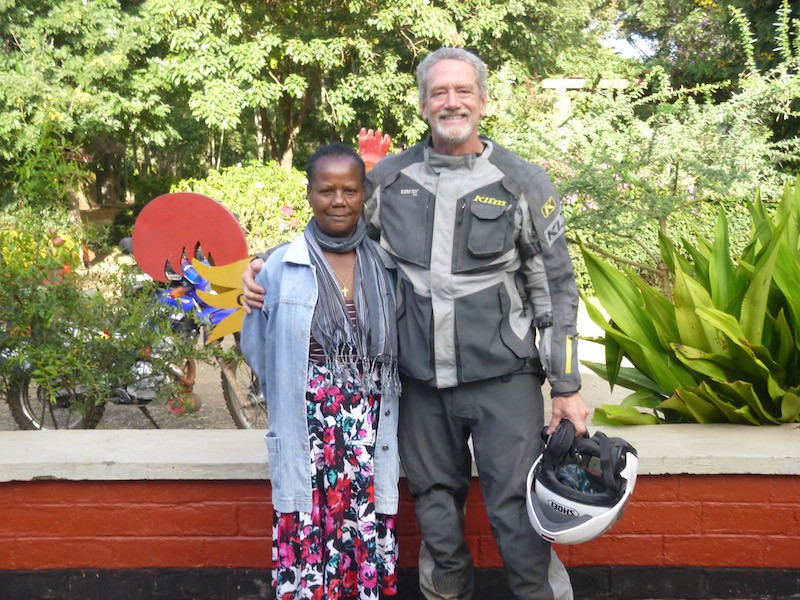 Mama and me. What a nice lady. She bought this six acre bare piece of land over 20 years ago, planted all the trees herself, then built the restaurant, bar, and lodge. It’s a beautiful, relaxing place. I hope to see her again when she comes to Texas to visit her daughter and son-in-law who live near where I lived.

Chips Mayai: basically an omelet with french fries cooked in it. Good stuff. I had this for dinner two nights at Meserani. 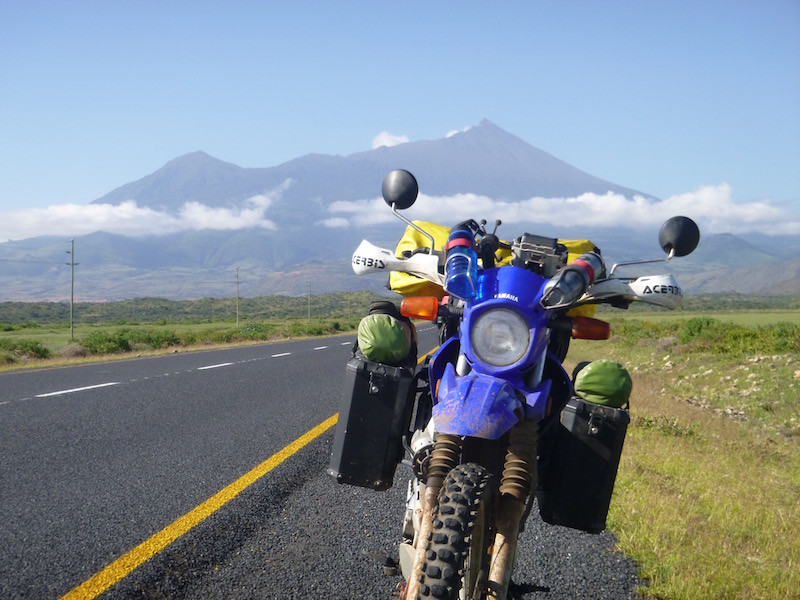 Heading north out of Arusha toward the Kenya border. Mt. Meru in my rear view mirrors.

And very hard to see, but Kilimanjaro off to my right in the distance (between the tank bag and rear bags).

The border crossing was a bit confusing due to construction of a new checkpoint facility. The road looped around the new construction, and it was quite easy to miss both the exit from Tanzania and the entrance to Kenya. Eventually I was able to get both done, and on my way toward Nairobi. 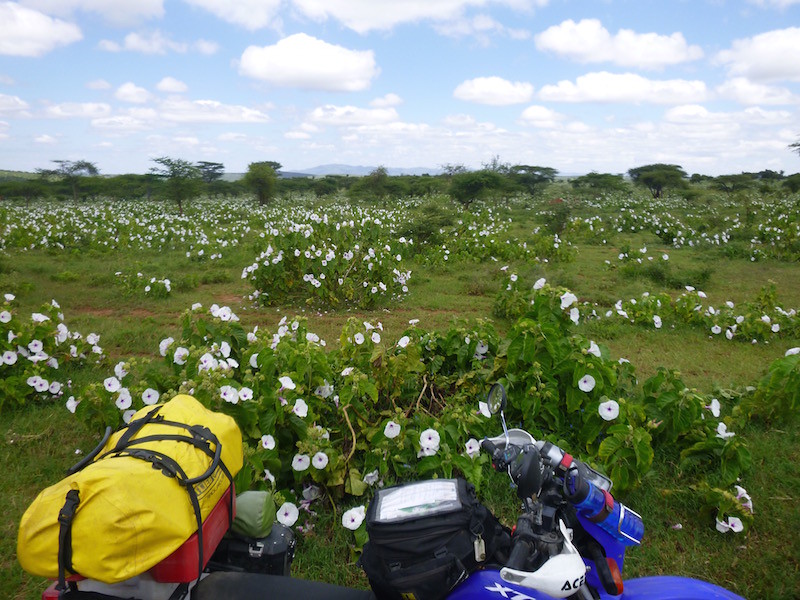 These flowers were thick along the way in southern Kenya, as were the Maasai men herding goats and cattle.

On the way through Nairobi to my camp I stopped at an ATM to get some Kenyan Shillings, and the woman security guard at the ATM was helpful in guiding me to the ATM that would accept my card (there were four different machines in the same room on the side of a gas station/convenience store). I decided to walk around to the front of the building and buy some bread and water in the store. When I returned, the female security guard was leaning on my bike, watching it for me, and studying the route I had written out in the top map pocket of my tank bag. She pointed to the coordinates for “Jungle Junction”, the overlander camp I was headed to, and said, “You must take me there some day”. I couldn’t help but smile. I’m sure she wanted to see the jungle, and wasn’t aware that Jungle Junction was in the middle of Nairobi.

While we were talking, more security guards showed up, along with two guys that worked in the pizza place next door. They were very curious about the bike, the GPS, and as usual, struggling to accept that I had ridden this same bike from the United States to South America and then through Africa. 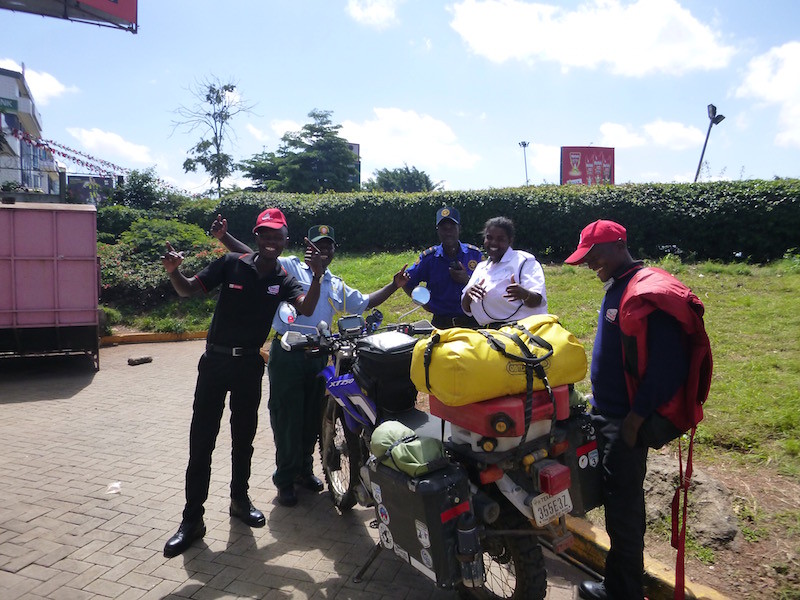 My first encounter with Kenyans. A very happy bunch.

I pulled into Jungle Junction and set up camp for a while. Here I would wash and crate the bike, and sort the shipping for the next leg of the trip.

Home for a week or so in Karen, Nairobi. 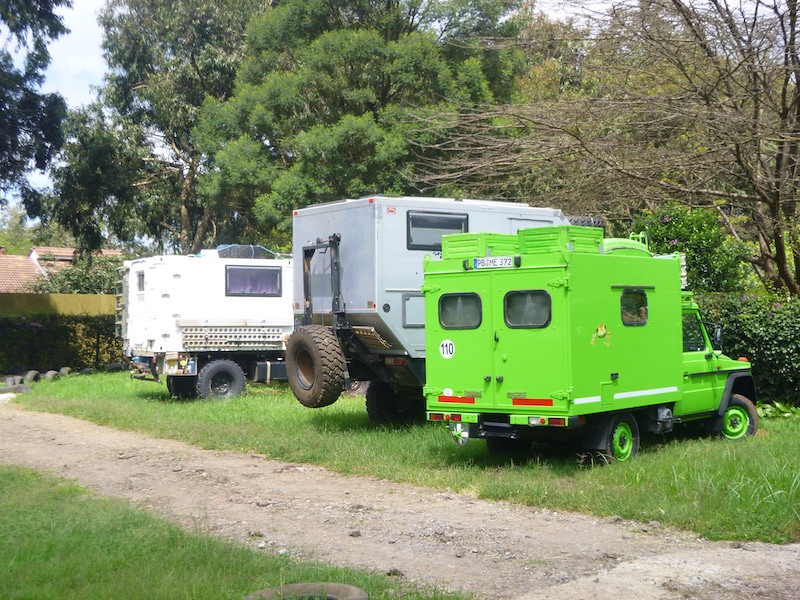 A lot of overland travelers use Jungle Junction to store their vehicles for a while. 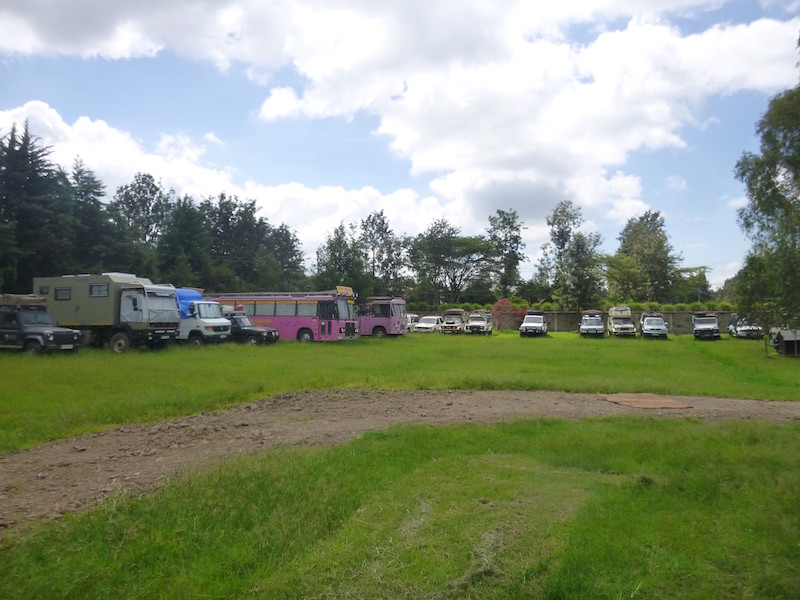 A LOT. Yes, even the two pink buses are overland travelers (from Sweden). 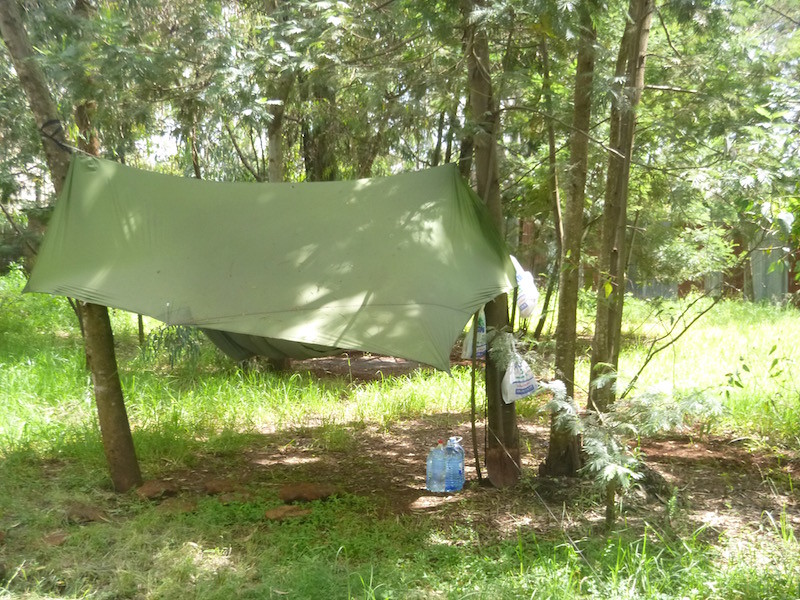 I also met Nino here. He’s from Switzerland, traveling by bicycle, for years (he couldn’t say how many kilometers or how many countries he’s ridden through). He jokingly called himself a “Luxury Traveler”. He has both a tent similar to mine, and this Exped Ergo hammock, as well as a laptop. Not the typical minimalist bicycle traveler I’ve met in the past. He’s been camped here at Jungle Junction for 8 weeks now. Just taking a short break before continuing south.

Aussies Jen (whom I met in Arusha a few days earlier) and her partner Craig were also here on their CRF250L Hondas. They are working on obtaining their visas to enter Ethiopia in the next few days. They were a wealth of information for future Africa travels, and I was able to help Craig with some service on his CRF as well as a quick troubleshoot on Jen’s.

2 thoughts on “Arusha to Nairobi”