We rode off the Alaskan ferry and headed south, back to Coupeville and boarded yet one last ferry across to Port Townsend. After a quick visit at a local coffee shop with my niece, we rode across the top of the Olympic Peninsula, through Forks (famous for a number of things, including the filming location of the Twilight series, and more recently the now infamous attack of a family on their bus in a case of mistaken identity), and on to the Hoh Rainforest. The Hoh is one of my all-time favorite places. It has an other-worldly feel to it, and is so green and so dense that noise is almost completely muted. As we rode the nine miles from the highway to the visitor center, I couldn’t help but hum the Star Wars theme, and I could envision Ewoks on Speeder Bikes racing us through the trees.

Unfortunately, but as we had known all along, the campground was full and there had been no cancellations for the day, so we turned around and rode the nine miles back to the highway, and continued south to Ocean City, Washington, where we stayed in a small cabin (hut?) a block from the beach.

Our “cabin” for the night at the Screamin’ Eagle RV Park in Ocean City, Washington.

The inside of the cabin is nothing fancy. There is a mattress in the loft, but we chose to just lay our camping mats and sleeping bags out on the floor downstairs. There was a small electric heater that was very much appreciated once the sun went down.

It was a one block walk to the beach.

In the morning, we continued a bit further south to Astoria, Oregon before turning east and following the Columbia River to The Dalles, eventually making camp at Maryhill State Park for the night.

In the morning, we awoke to rain on the tent. We packed up and rode in rain the entire day, arriving in Meridian, Idaho that afternoon. It was once again time to change tires on the bike, and we had arranged for tires to be shipped to a hotel next door to a motorcycle shop. The next day I pulled the wheels from the bike, but unlike last time, I let someone else mount the tires. By noon we were back on the road and headed the back way via the Peaks and Craters Scenic Byway to Idaho Falls. We passed through Craters of the Moon lava field before stopping at Atomic City, the home of Experimental Breeder Reactor 1 (“EBR-1”), the world’s first electricity-generating nuclear power plant.

Unfortunately the museum is only open through Labor Day, so we didn’t get to go inside. 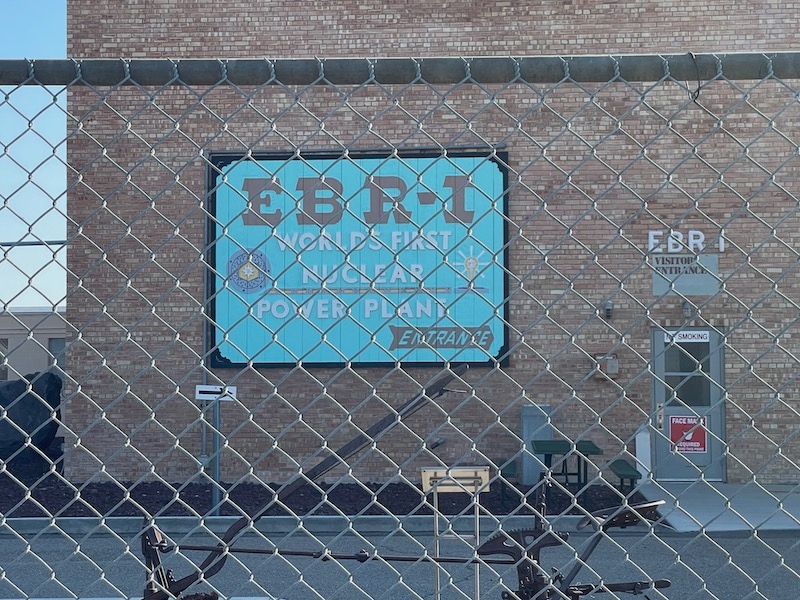 This is as close as we could get to EBR-1.

These two huge reactor cooling units were in the parking lot.

We were curious about who made the decision that the best place to build nuclear reactors was next to a giant lava field…obvious evidence that the ground here could be highly unstable.

We spent the night at a nice city park (Tourist Park) in Idaho Falls, for $15 a night. As we pulled in, we were approached by a gentleman who said “If all of the sites are taken, you’re welcome to pitch your tent in my site.” He was traveling in a pickup and had a similar sized tent. We circled the park, and found one remaining site. I later walked over and introduced myself, and found out that Michael was traveling similar to us, living out of his Ford truck. He had done quite a bit of world travel, and was interested in traveling by motorcycle. We shared travel experiences before I headed back to our camp.

Not long after dinner, two motorcycles rolled into the campground. Thinking of Michael’s generous offer, I flagged them down and offered space in our site for their tent. Ron and Kevin were from Phoenix and were headed back home after traveling through Montana.

It was good to meet several like-minded travelers and share experiences. We were glad to finally be through Idaho for the last time and headed further east to new places.