After five days in Vilcabamba, I decided to re-write my original post, which was rather scathing. This morning at breakfast I realized that it went against what I have believed all of my life, which is that all people should have the right to believe what they want to believe and worship as they see fit, so long as it doesn’t harm anyone else, and they don’t force it on me.

I definitely didn’t feel like anyone was forcing anything on me in Vilcabamba, but at times (especially on the weekend) I had moments where I felt like I was drowning in New Age eccentricity. Either that or I had somehow been transported to an alternate universe along with many people from Haight Ashbury in 1967.

I have to admit that my feelings for the place have rolled like a sine wave. When I first arrived and saw the village, I had a very positive feeling about it. The next day (Saturday) when I saw the large volume of ex-U.S. hippies converging on the square, my feelings weren’t so positive. By Monday, the square had returned to a very Latin American “normal” and a ride through the surrounding countryside helped to bolster my positive feelings about the place. 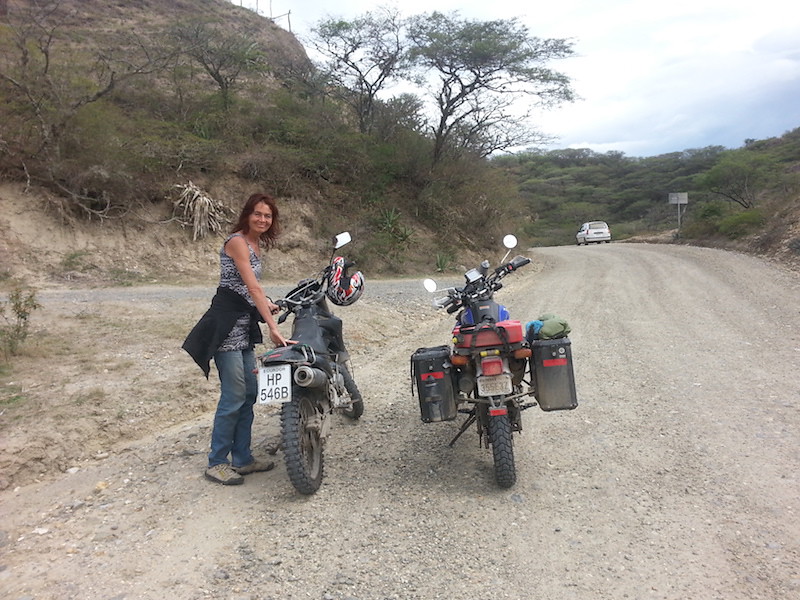 My house-host Anya took me for a ride outside of Vilca, through some nice countryside. It helped restore my faith in the area. 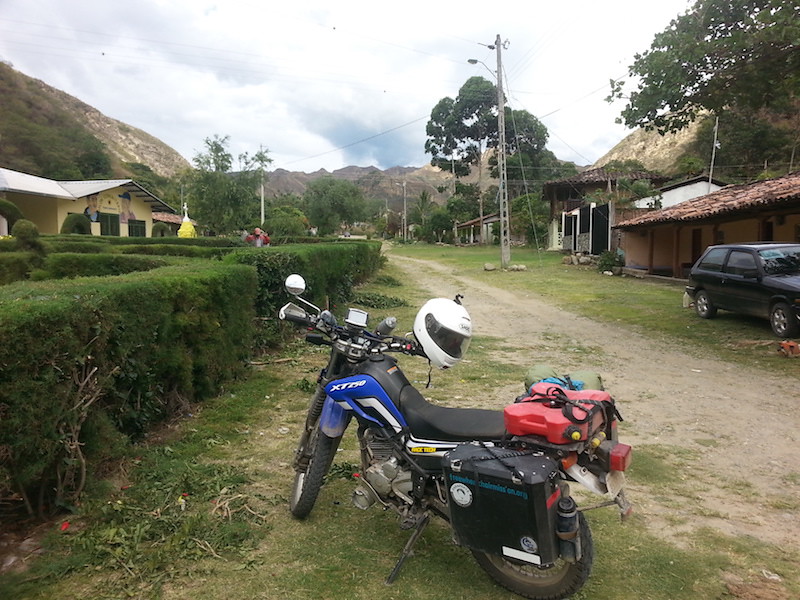 The tiny village of Tumianuma, near Vilcabamba. Down a nice road, past million dollar homes, this place is unspoiled and original.

I really, really wanted to like Vilcabamba. I read articles over the past decade about the “eternal spring” temperatures here, and the “Valley of Longevity”. Supposedly people lived long lives here, well in excess of 100 years, claiming up to 130 years or more. Of course, that study was later proven wrong, but people here still embrace the concept, so much so that even the signs with the town’s name on them show an old guy with a cane in the logo.

Town information sign in the city’s central park. Notice the old guy in the town logo. Oddly, he doesn’t seem to be wearing a flowered peasant shirt from the 1960s, or Aladdin flowing trousers, or sandals, and doesn’t have dreadlocks or braids. Obviously needs updating to reflect the current Vilcabamba.

When I arrived, I walked around town, looking at the village from different angles, taking it in. It’s a beautiful valley. There are a large number of restaurants and coffee shops in town for such a small place. (and TWO sushi bars, which as I’ve said before is a warning indicator for me). It’s generally a quiet, sleepy little community. 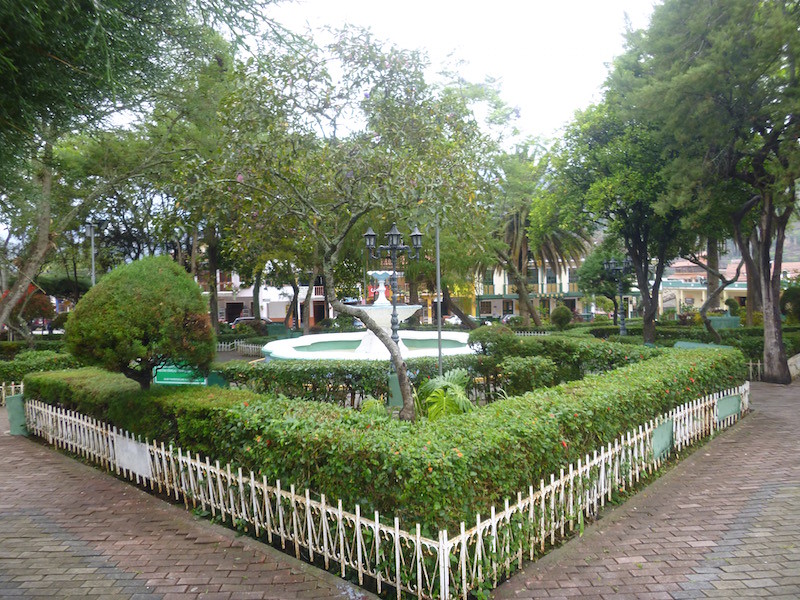 Typical Latin American central park in town. Very nice, very comfortable to just sit a while and people watch. It’s the people that make this one different. 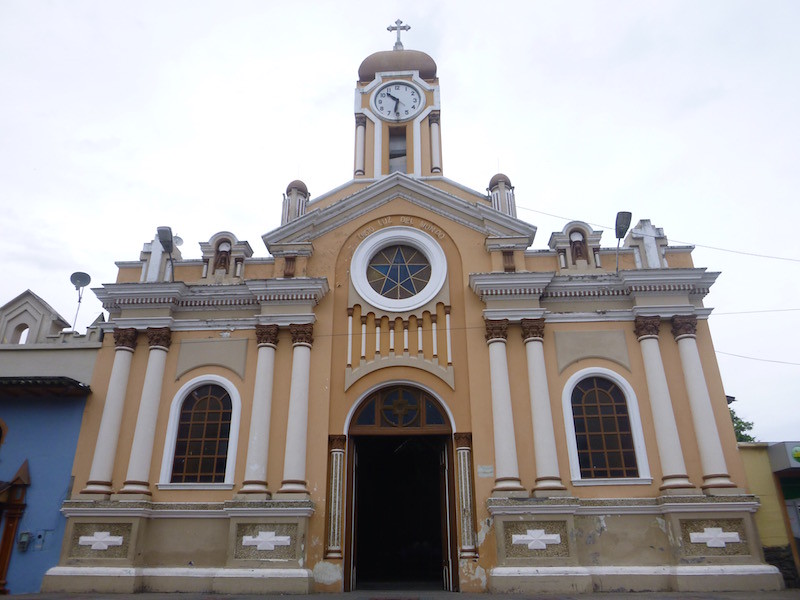 Beautiful church on the square.

I was walking along the edge of town when I saw all of these chickens lined up on the sidewalk, equally spaced apart. I thought that was strange until I realized they were all tied in place. The opposite sidewalk was exactly the same.

Vilcabamba makes Austin (whose slogan is “Keep Austin Weird”) look like a far-right conservative midwestern farm town. None of the people creating this effect in Vilcabamba are natives. And the natives seem split over it: the business owners seem to just grit their teeth and go along with it because at least some of them are benefitting from it. The local residents that were here before all of this “New Age” eccentricity arrived clearly aren’t thrilled with what has become of their little town.

I’m reminded of a cartoon from years ago, showing a Harley Davidson rider wearing a leather vest, leather chaps, boots and a do-rag, and pointing out all of the accessories on his Harley Davidson, all of which he bought to show his “individualism”. Of course, he and his bike were exactly like all the other “sheep” that spent a ton of money to “fit in” with a culture. They were trying so hard to be accepted and to look accepted that they lost their individualism entirely.

That’s what the ex-pats of Vilcabamba look and feel like.

Perhaps, as someone suggested, it is possible to live outside of Vilcabamba and only go into the town when needed. This sounds sort of like my love affair with Austin, having lived a distance from the craziness in a slightly more sane rural environment but still able to take advantage of what the city had to offer. But Vilcabamba isn’t a city. It’s a village. There isn’t much here, especially culturally. Not like Austin. I heard there are other “communities” on the outskirts of Vilcabamba that have a different feel, and that some of these communities have their own “energy”.

Looking around the city center for a few days, it would appear that all of the people who lived to a ripe old age in the Valley of Longevity have moved on. The percentage of New Age spiritualists seems to be increasing. And it’s my opinion that they have a right to believe what they want to believe. As do I. And I believe it’s time to hit the road.