My bike flew into Cape Town from Buenos Aires via London yesterday. This morning I went to the airport to begin what I assumed would be a long process of getting the bike through South African Customs. I had set aside a couple of days for this process just in case, especially since I still didn’t have a title for the bike (it’s on its’ way; in South Africa now but hasn’t been delivered yet), and I wasn’t sure if I could get the bike released without the title.

First up: find the bike. It arrived on a British Airways 747, but nobody, including Google, seemed to know the location of British Airways Cargo Services. I wandered the airport for a while, until someone pointed me towards South African Airways Cargo. It was a large building, so I thought maybe they shared it with British Airways. After going through their security checks and signing in, I was told that British Airways cargo was handled by Swissport, which was a few more blocks down the street.

When I got to Swissport, they immediately knew my bike was there, and handed me paperwork and directed me towards Customs which was just across the parking lot. This is the point that I figured I was going to spend the rest of the day, and I fully expected to have to hire a customs broker in the end to complete the transaction. But I was determined to try to do it myself first and save the expense.

To my surprise, the woman in the Customs office was incredibly helpful and very knowledgeable. She handed me another form to fill out, which I recognized as the form that a customs broker would normally complete. I took this as a good sign. She then asked me to sign a form giving Customs the authority to fill out my carnet de passage. For those of you who aren’t familiar with the carnet, it’s basically a form stating that you have put up money for a bond, and are temporarily importing the motorcycle and will take it back out of the country within a certain time limit or forfeit your bond.  This is required in many countries, including most of Africa. I’ve been carrying it with me but hadn’t needed it until now.

I signed the letter of authorization and she filled out and stamped my carnet. She never asked for any other paperwork for the motorcycle. At this point she and I walked back over to the Swissport warehouse together and she verified the chassis number of the bike, then signed the release form.

Well, I did have to pay Swissport $18.95 for handling charges. But within two hours I had my bike and was free to go. No hassles. Very little waiting. It probably took me longer to get to the airport and find the right warehouse than actually walking the bike through Customs.

The forklift driver and warehouse supervisor asked me where my vehicle was located to load the pallet. “I’m going to ride it away”, I said. They looked at me, then at each other, then back at me. Finally the forklift driver said, “Who?”

“Me.” I waved my helmet at him. The grin on his face was huge. I’m not sure, but I think he was thinking, “This guy is crazy, and too old to do this.” Apparently I don’t look like a motorcyclist here. I haven’t decided yet if that’s a good or bad thing.

I took the bike off the pallet, connected the battery, installed the mirrors, pulled my compressor out and aired up the tires, and I was ready to go. Slowly. Very slowly and cautiously. Because they drive on the left here. Which makes intersections, especially right turns, a bit tricky at first. Not too bad if you’re in traffic and can follow other cars, or when the street is well marked with arrows painted on the lanes. Without all of that, it requires a bit of extra concentration. As I approached the first roundabout, I was constantly repeating “LEFT! CLOCKWISE!!” in my helmet. I know from past experience riding in England that it will quickly get easier.

I’ll spend the next few days sight-seeing around Cape Town and prepping the bike, then I plan to head along the coast for a few days, camping and visiting some of the spectacular spots in South Africa. It’s all coming together. 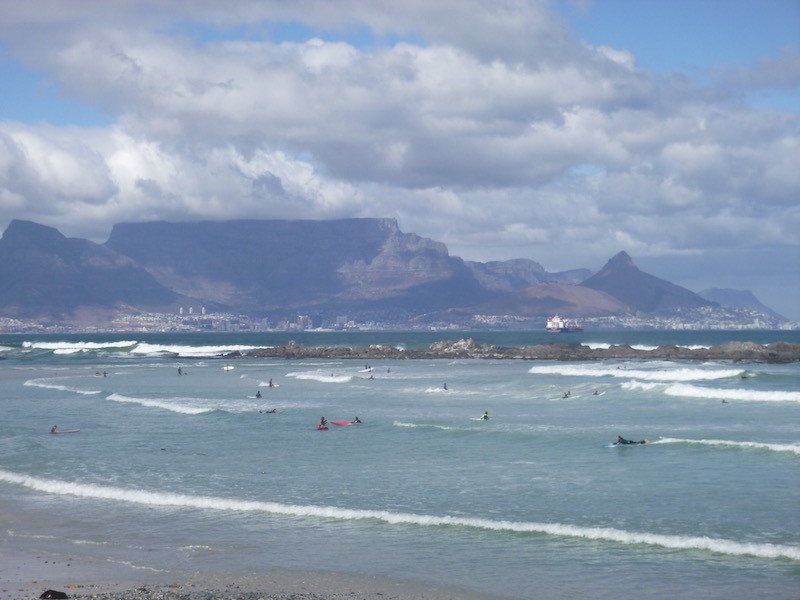 Feels like Southern California (temperature and neighborhoods), looks a bit like Honolulu. That’s Table Mountain in the background. I’m headed there tomorrow. More details on that later. 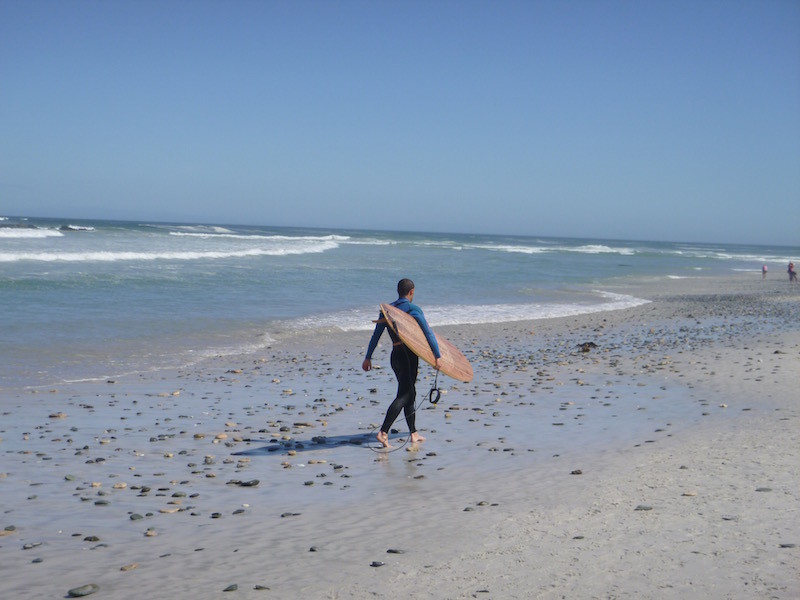 I couldn’t decide if this guy’s board was really wood, or just fiberglass made to look like an old-school wood board. It has grain and knots and the whole bit, but I’m pretty sure it’s fiberglass. Looked cool though.

Cape Town’s version of Alcatraz: that’s Robben Island in the distance. Originally a leper colony, later a prison, this is where Nelson Mandela was imprisoned for 18 of the 27 years he served behind bars. In addition to Mandela, two other South African presidents, including current President Jacob Zuma, were former inmates here. It is now a museum and the tour guides are former prisoners.