The population of Bangkok is just under eleven million people. Chiang Mai, Thailand’s second largest city, is around 1.2 million. The difference is immediately noticeable as you enter Chiang Mai. You can feel the slower pace of life.

The constant frenzy of Bangkok traffic doesn’t exist in Chiang Mai. Yes, there is traffic, but it is more controlled, orderly, spread out, and calm. It’s amazing to me that-there aren’t many many more accidents in Bangkok, as pedestrians, bicycles, scooters, motorcycles, tuktuks, cars, trucks and buses all scramble and fight for the same space. The lane markings are truly nothing but suggestions as cars split lanes between cars, Tuktuks split lanes between cars, and scooters split lanes between tuktuks and cars, all at speed (at least when possible). Turns into and across traffic occur at will, and occasionally a scooter will slowly come down the left shoulder in the wrong direction rather than go around the block. Yet with all of this chaos, vehicles mostly complete this dance with inches to spare and no honking of horns, obscenities, etc.

I could feel myself relax in Chiang Mai. Watching the traffic, I felt a new reassurance that riding into this traffic on a motorcycle could be safely accomplished. “Safe” being a relative term of course.

We spent two nights at Rider’s Corner, a bar/restaurant/B&B/motorcycle rental place. We had originally planned to rent a Honda CRF250L, but a CB500X came available and we opted for it as it had a little more room for us, a little more power, and a lot more storage space.

Rider’s Corner was a good base in Chiang Mai. It was close to several good restaurants, markets, etc, and made for an easy departure out of the city. 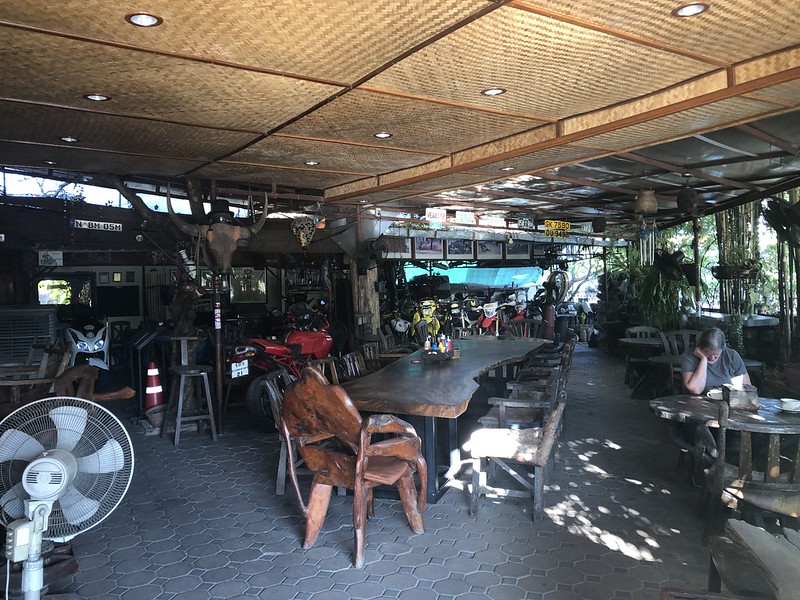 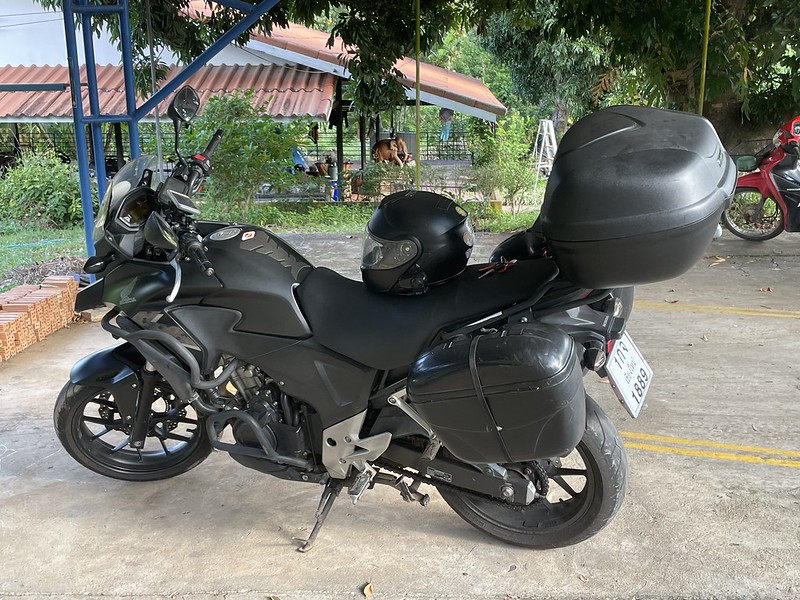 Our ride for the next two weeks. We didn’t plan to have this much storage space, and since we packed light we actually have room left. But not enough for “souvenirs”!

After plastering a 2 Ride The Globe Sticker on the wall and loading up, we headed out. Rider’s Corner is on the northeast corner of the inner ring, a road that runs counterclockwise just inside the old city walls. The outer ring is just outside the wall and runs clockwise. So we had to go about 300 meters on the inner ring before we could cross to the outer ring and head back in the other direction. And about 400 meters later we were pulled over by the National Police. We hadn’t been on the bike five minutes! They asked to see our passports and International Driving Permit. In nearly 50 countries and 50,000 or so miles, this is only the second time anyone has ever asked to see the IDP (the first time was in Namibia). We got off the bike and I pulled our document bag out of the backpack. Before I could even pull the IDP out of the bag, the officer saw it and his demeanor immediately changed. He no longer wanted the passports and was almost apologetic. I think he was truly surprised that we had an International Driving Permit. There are so many tourists and backpackers in Chiang Mai that rent scooters and have no idea that an IDP is required in Thailand. It’s easy fishing for a cop: just find the Farang on the rental bike and probably 8 or 9 times out of 10 it’s payday.

The officers were very nice and even joking once they saw we had the correct documents and they saluted us and wished us a good time in Thailand.

We headed out of Chiang Mai for about an hour on the main road west, then turned off and headed north up the mountain to Doi Inthanon, the highest point in Thailand. We were both looking forward to some cooler temperatures and this was our chance.

The summit at Doi Inthanon.

Everywhere we go we see tourists doing their poses for their social media photos, so I’ve decided it’s time to join them. This is my new “look at me!” pose.

The summit at Doi Inthanon is 8421 feet above sea level. And the permanent sign here also said it was 9 degrees Celsius, or 48F. The sign is screwed in with rusty screws and the numbers aren’t changeable, so I’m not sure when it’s 9C, but I’m sure it’s right occasionally. It was closer to 16 when we were there, which is still a welcome change from the heat and humidity at the lower elevations.

Buddha shrine at the top of the overlook. 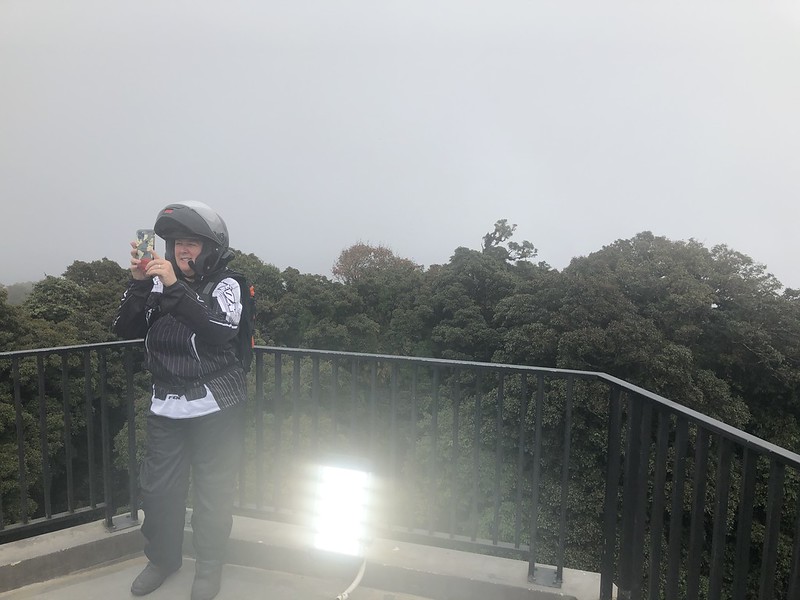 Diana taking a photo of the above shrine. In the background you can see… nothing. The fog was so thick at the top that there was no view. It’s probably a distant stretch of mountains on a clear day.

As we headed back down the mountain we turned and took a back road across to pick up Highway 108 again. The smaller road was rough in places and full of potholes. It was obvious that the rainy season had not been kind to this road. There were many mudslides and downed power poles along the road, and occasionally we would come upon a place where the road had washed away, leaving little more than one lane.

We eventually made our way back to 108, a huge improvement in pavement, and considerably less dogs and chickens in the road. From here the road begins to curve and wind its way through the hills, and there is rarely a straight section of road. The average speed is around 30 to 35 mph (50 to 60 kph), and every now and then you can get up to 80kph.

We made our way to Mae Sariang and found our hotel for the evening: a nice bungalow with a shower and A/C.

People often make fun of me for using GPS coodinates instead of addresses when planning routes. I even give my home address to other travelers in the form of GPS coordinates. And here’s a good reason to use them: the sign in the photo is our hotel. Try typing that into Google Maps.

We ate dinner at a roadside stand just down the road from our hotel. We were the only non-locals at the place, and the menu was in Thai only and no accompanying pictures. We’re far enough out of Chiang Mai that there is very little English now. I used Google Translate’s camera function on my phone with some small amount of success and was able to order two plates of food and a large Singha beer. We’re still not sure exactly what the food was, but it was delicious.

Menu. Use Google Translate camera, get maybe three or four words to pop up but they change constantly. One second it says “chicken” and a second later it changes to “disloyal agent” or something similar that means nothing. Point at item that you think is somewhat identifiable. Roll dice.

Beef. Looks and tastes like skirt steak or beef fajitas. Very good. Dipping sauce is spicy, somewhere between “Need a sip of beer now” and “My lips are on fire”.

Fried seafood. Unsure what kind; possibly a combination of local fish and calamari. Also very good. There was a lot more on both plates, but we were so hungry we forgot to take photos before eating most of it.

Today was one of the longest days we’ll do in Thailand, at 160 miles. It felt great to be back on two wheels. Most of the next couple of weeks will be between thirty and eighty miles a day. Most people do the Mae Hong Son Loop in three to four days. At four days you can see a lot of the scenery, but not much of the people and culture. It will likely take us closer to twelve days, and we’re already moving too fast.