“The Trail of romance, adventure, hope, faith, and achievement as well as the Trail of misery, tragedy, hardship, despair and death.”

This is not a description of our ride, thankfully, but rather a quote from Walter E. Meacham describing the Oregon Trail, the route from Missouri to Oregon in the mid-1800s that emigrants, moving west, followed. It was a difficult journey, made even more so by greedy trading post merchants in Missouri who knowingly convinced pioneer families to seriously overload their wagons with unnecessary supplies. The trail was littered with personal items, broken wagon parts, and often new merchandise that families abandoned as they continued their drive west.

Esther Lockart described her journey across the Oregon Trail in 1851 this way:
“We came across many evidences of the jaded conditions of the cattle in the trains preceding us. Feather beds, cook stoves, chairs, tables, bedsteads, dishes…all in good condition, strewed on the ground…left to decay and rust among the lava rocks.” 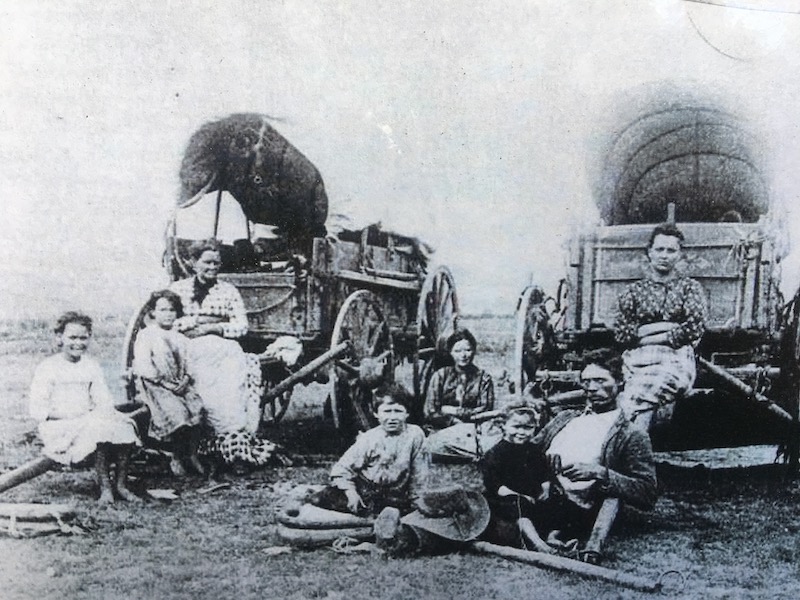 Emigrants along the Oregon Trail.

Captain Medorem Crawford, an experienced Oregon Trail team leader, issued a letter “To Emigrants” full of helpful advice on how to make a successful crossing, including how many men it would take to support each wagon, how many days it should take, and what supplies should be taken. In it he advised, “Each person should take 250 pounds of provisions; one-half of which should be flour, fifty pounds bacon, the balance in sugar, coffee, tea, rice, dried fruit, etc.”

We are camped this night in Emigrant Springs Campground, along the Oregon Trail. Of course, this wasn’t a nice, civilized campground with restrooms, showers, water spigots, and paved roads in 1851. But it was a stopping point along the Trail. The Civilian Conservation Corps began to develop this camp area in the 1930s. Sitting here tonight, looking at our motorcycle, it’s easy to imagine it as a wagon and oxen or mules, with all our supplies attached to it. It is much harder to imagine the intense daily strains the emigrants encountered on their more than one hundred day journey across this rugged land.

And it’s even harder to imagine how much I would weigh after eating 125 pounds of flour and fifty pounds of bacon.