Okay, that’s misleading. There is no Thanksgiving Day in Peru. At least not the U.S. version. But that’s where my Thanksgiving Day was spent. I set a number of personal records today for this trip:

I also broke several of my personal rules today:

There were some highlights to the day as well. So “let me start over” (inside joke….only one person that may or may not read this will get that):

After leaving Vilcabamba I rode a short day to Macará, Ecuador, which sits right on the border with Peru, and checked into a hotel there. Macará is a rough looking border town, but the hotel was a high spot — nice and clean, with a large secure garage. This allowed me an early border crossing the next day.

This morning I left Macará and got to the border by 9:30. I wish all border crossings were a carbon copy of this one. The entire process, including checking myself and my bike out of Ecuador, crossing the bridge, checking myself and my bike into Peru, and purchasing the obligatory SOAT third-party insurance for Peru, took just under one hour. The officials on both sides of the border were very helpful. The guy at Aduana (customs) in Peru even had his own copier!!! Amazing!! I didn’t have to walk down the street to a food vendor to pay to have copies made like in Central America. And he didn’t charge for the copies. Aside from the insurance, the entire border crossing was free. Note that this is not the high-volume border crossing; that one is further west at Huaquillas. There was one other person in line at immigration and I was the only person at customs.

Several miles south of the border, I came upon a checkpoint. The officer asked for my paperwork, and then the fun began. This guy had my sense of sarcasm, and I loved it.

Officer: “Everybody has to go to the tip of South America to take a photo.”

A clear indication that although I was not on the main Gringo Trail, I was still on Gringo Alternate 1.

And with that he handed me my paperwork and wished me a good day.

As I continued south towards Piura, the scenery very quickly changed to desert. For the first time in weeks, I was below 5,000 feet elevation and still dropping, and my surroundings were looking a lot like the high desert of southern California. The quality of life seemed much worse than I had experienced in the mountains of Ecuador and other countries previously. I’m not sure if it’s just the difference between the houses being exposed in the desert, as compared to the lush greenery of Ecuador, or if it is truly that much worse. But when you live in the desert, you are forced to make do with much less in terms of resources and building materials.

Entering Piura, I noticed a couple of things. First, even though I had been warned by Judith, Ian, Mike & Shannon, and others, this was my first real exposure to the “suicide” driving method here in Peru. The thinking seems to be, “Your lane? You don’t have a lane, amigo, you are on a motorcycle. I will go around, over, or through you.” People pull directly out in front of you in an intersection (without even slowing down as they approach it), even if you are on the larger road (highway) and moving at 50mph. They will pull into the opposite lane and come straight for you. And they are not playing chicken. Or if they are, they always win, because they never pull back in. They will pass you on the right shoulder. They will pull off in the dirt to pass (in town) and then turn in front of you. Cars, buses, 18 wheelers, moto-taxis, it doesn’t matter. Which is when I noticed the other thing: there are no traffic lights in Peru. At least not many. I rode through several good-sized cities today, and never once saw a traffic light. Which might explain the suicidal driving, or at least part of it. At one point today, having just survived an 18-wheeler pulling across the intersection directly in front of me and several cars, I began to think that there must be a limitation on driver licenses in Peru: if you have an IQ over 60, you don’t get one. At least they drive like that’s the case.

South of Piura, the desert turned to sand. Pure sand. As in dunes. For close to two hundred miles. If you are familiar with California, think about Highway 395 from Victorville to Mammoth Lakes. The road itself is a lot like that: two lanes, very straight. Now think of driving that same straight, two-lane road through sand dunes the entire way, with a 35mph crosswind blowing sand across the highway. And that’s the Pan American Highway from Piura to Trujillo. 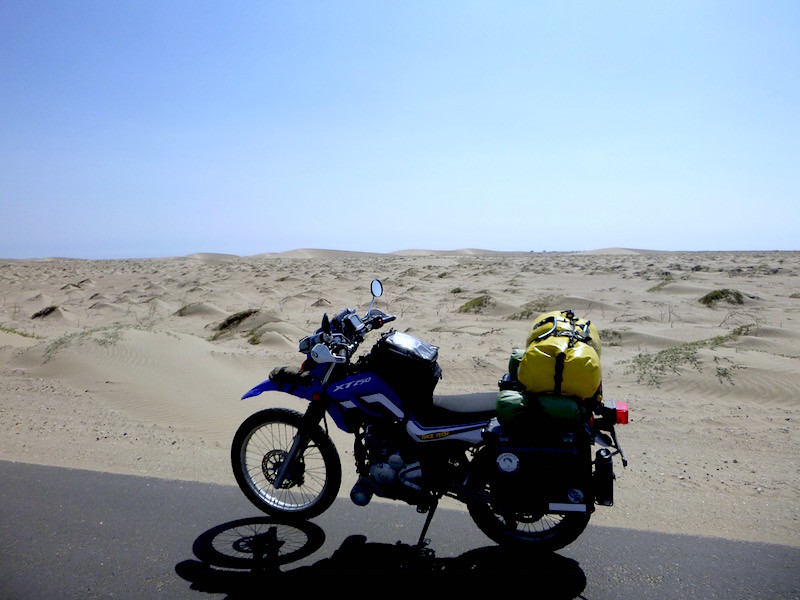 I hate to be negative, but I feel I have to in order to give the full picture here. What happened to self-respect? For more than two hundred miles. with few exceptions, it looked like I was driving through a landfill. Plastic trash bags everywhere. Thousands. Tens of thousands. The amount of trash was unfathomable. You could tell when you were within ten miles of a town: the trash suddenly got much thicker. This was definitely different than previous countries. There’s no way you can hide that much trash, even in the mountains. And I didn’t see trash bags piled and blowing around in the mountains.

I kept heading south, thinking “I’ll stop when this gets better.” But it never really did. I know this isn’t representative of all of Peru. I’ve been telling everyone the best is yet to come. And I was thinking of the mountains of Peru and Patagonia. I know Peru won’t disappoint me. I just need to get off the Pan American Highway.

I ended up riding all the way to Trujillo, on the Pacific Coast, which was supposed to be my destination four days from now. It was looking like I was going to make it to the hostel just before dark. And then I ran out of gas. I had been pushing into a strong headwind and crosswind all afternoon, and I knew my mileage was suffering. But that’s why I carry a spare couple of gallons on the rear rack in a Rotopax container. So it was just a minor inconvenience. A few minutes later and I was on my way.

As I pulled into the hostel, I met Les and Catherine from No Agenda World Tour. They are traveling from Canada on their KLR650s. Way back in El Valle de Anton, Panama, a woman who was staying at the hostel there gave me a Post-It note with Catherine’s email address on it. She said she had met them on the road, and that they were also traveling with motorcycles. Her final comment was “But I know you’ll never contact them.”

Well, I did one better: I met them face-to-face!

I plan to spend a couple of days here at the beach, then head into the mountains and do some exploring.

6 thoughts on “Happy Thanksgiving! In search of Beautiful Peru…”