The sandy, pine forests of East Texas and Louisiana begin to give way as I cross into Natchez, Mississippi. There are still pines, but they are now joined by dogwoods, redbuds and oaks, among others. The scenery is definitely changing. I’m sticking to the back roads on my little 250, maintaining about 60mph where the speed limit is posted at 65. The bike is happy at that speed, and so am I. More time to enjoy the scenery.

Diana meets up with me in Georgia, and the weather catches up with us the next day. Not only does it rain all day, but the muggy 80 degree weather of the past few days is replaced with temperatures in the upper 40s. I layer up, but the chill is enough that I’m happy to have a hotel room in Fayetteville, North Carolina. We have arrived just in time for the Colonial Pipeline hack. The Carolinas, but especially North Carolina, is in a panic. Lines at gas stations are long, and many stations have run out of fuel. (Of course none of them would have if people wouldn’t panic and fill their cars up for no reason; within two days the pipeline is operating again and things are returning to normal). At one station in Washington, NC I wait for over an hour to buy my one-and-a-half gallons of fuel. During my wait, I get to watch a fight break out between a woman and a man who apparently was trying to cut in line. The police arrive, an ambulance arrives, the lines get longer. The stupidity over fuel, which is actually fairly easy to find, gets worse.

We make it to Frisco, at the very bottom of Cape Hatteras on Thursday evening, where we set up camp for two nights. It’s a beautiful campground, and apparently many people have canceled their reservations because of the “fuel crisis”, leaving a nice, quiet seashore and campground to maybe a dozen of us. 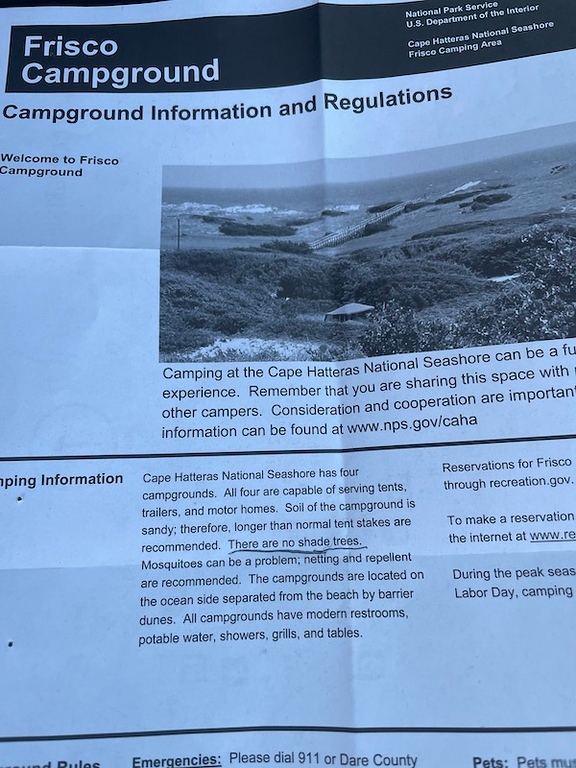 Campground information flyer for Frisco Campground at Cape Hatteras National Seashore. Note that the flyer says “There are no shade trees.” 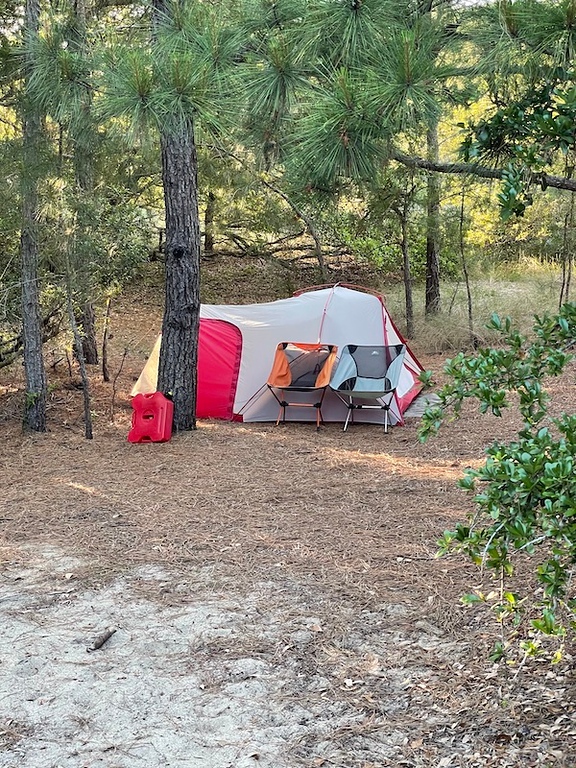 Our campsite at Frisco Campground. Yes, there are many pine trees, but I guess the rest are very large bushes? Plenty of shade here. Amazing that this is just steps from the beach.”

A short boardwalk leads from our campsite through the dunes to the beach.”

The next morning we visit the Wright Brothers National Memorial in Kill Devil Hills. This is an amazing place. It is so simply but well laid out that you feel like you are there on December 17, 1903 when Orville and Wilbur made their first four powered flights. It is humbling to think that within 25 years people would be flying aircraft across the Atlantic and only 65 years after that first flight we would land a man on the moon. 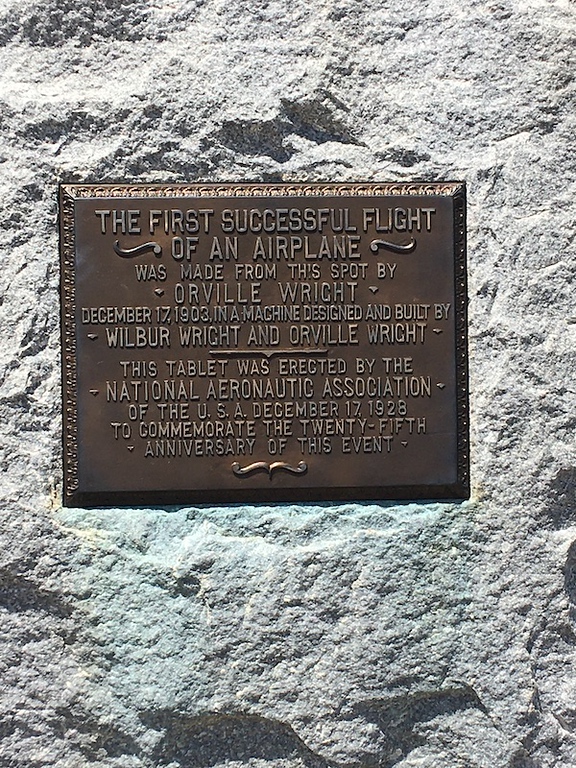 A stone marker stands where the Wrights launched their first powered flight.” 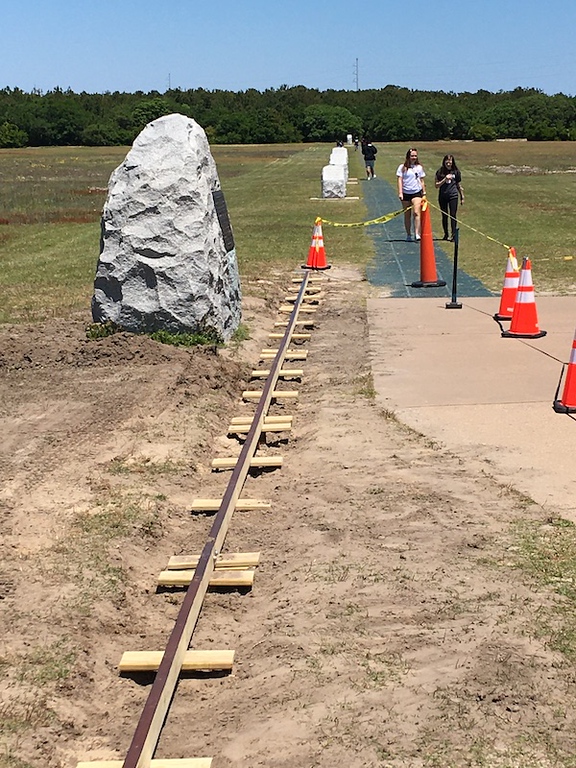 Because it was sand, and the airplane had skids and no wheels, the Wrights built a sixty foot long wooden rail, topped with steel. Then they built a small dolly with bicycle hubs for rollers, and set the plane on that. They tied the rear of the plane to a stake, and the two men each spun a propeller to start the engine. Once it was running, Orville climbed aboard and the plane was released while Wilbur ran alongside, helping to balance it. It was airborne in forty feet. There are four additional stone markers in the distance, each indicating the length and duration of the four flights that morning.”

The large monument atop Big Kill Devil Hill, where the Wrights launched their gliders.” 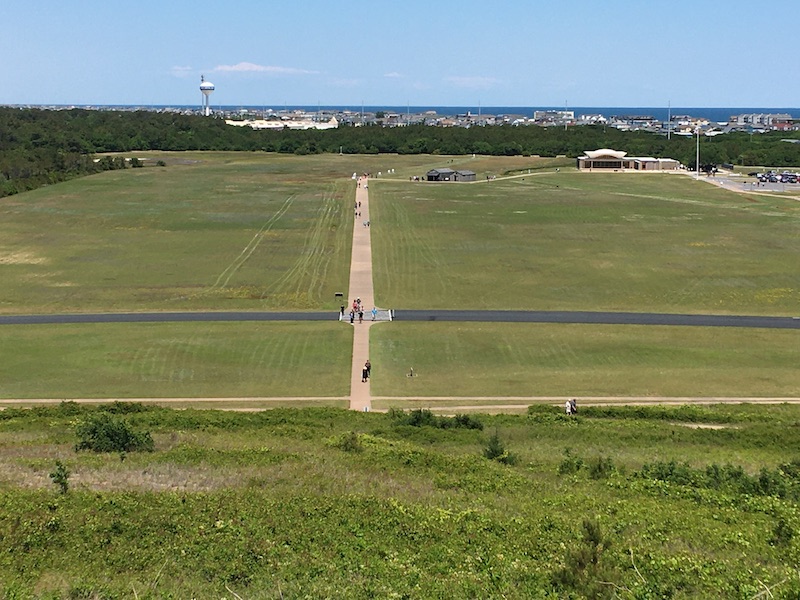 Looking out from the monument toward the field. You can also see reproductions of the hangar and the workshop, as well as the museum that houses an accurate reproduction of the Wright Flyer.”

Sometimes you just can’t make this stuff up: We were standing on the south side of the monument atop Kill Devil Hill (the photo above looking over the field is on the north side), and overheard four women talking. One said “I wonder where they actually flew the plane?” Another responded, “I think it was right here”, pointing south toward the town of Nags Head, “but this hill wasn’t here, it was flat then.” We just looked at each other, dumbfounded. These four had to pay to get into the park, then walk past the museum, past the hangar and workshop, past the stone monuments and the launch rail, then climb Kill Devil Hill. All along that route are markers describing what took place here between 1901 and 1903.

In the morning, I will catch the ferry to Ocracoke Island, on to Cedar Island and back to mainland North Carolina, beginning my westward trek on the “Trans America Trail” (really more of a “Trans America Route” at this point, as little or none of it is actually a trail). Diana will backtrack and meet up with me somewhere along tomorrow’s route.