After two days on Cape Hatteras, it’s time to start west. Diana will drive back the way she came, which is sixty miles back up the Cape before crossing several bridges to the mainland. I have a short 5 mile ride to the Hatteras Ferry which will take me to Ocracoke, where I will catch a larger, longer ferry to Cedar Island and onwards across North Carolina on the Trans America Trail.

The first ferry is free and first-come, first-serve. The second ferry only runs three times a day, and requires a reservation. I have a reservation on the 1pm ferry from Ocracoke to Cedar Island. I have to check in about an hour earlier, so I need to be there by noon. To be safe, I decide to try to get on the 9am ferry from Frisco to Ocracoke. Since it’s first-come, I decide to arrive by 8am. As I pull up, they are loading the 8am ferry (it runs every hour or so). Then it sits, fully loaded. Cars arrive and line up for the 9am ferry, but the 8am ferry is still here.

It turns out that there is a large fishing tournament here today, and six of the boats in the tournament have managed to follow each other aground in the Sound, blocking the inlet for the ferries. So we are all stuck at the moment.

Eventually they are able to clear the path, and the ferries depart. On this ferry, motorcycles board last. On the Ocracoke-to-Cedar Island ferry, they board the motorcycles first. 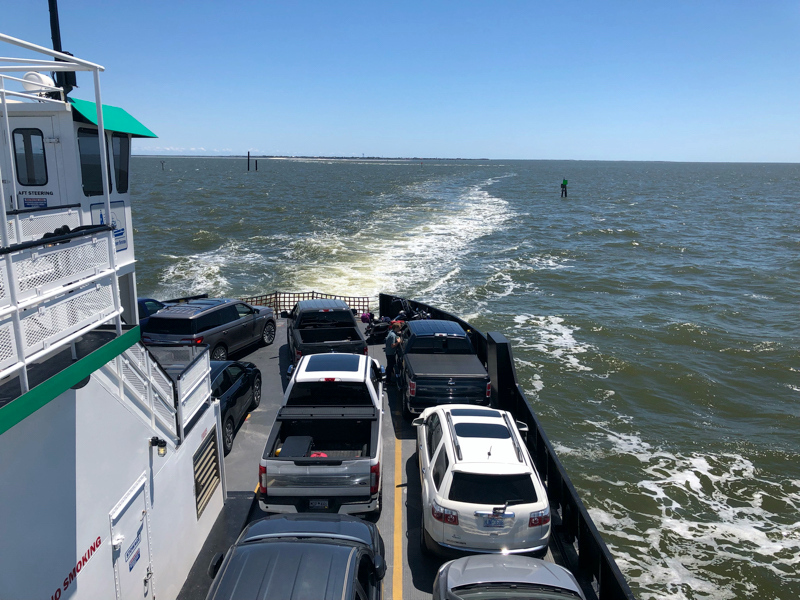 Cedar Island Ferry crossing. Two hours, 15 minutes. In the middle of open water, the ferry slows and begins performing S-turns. Apparently the Sound is that shallow in many places.”

After spending most of the day waiting for, and riding ferries, I arrive in Maysville at White Oak Campground. Tomorrow will hopefully be my first day of more unpaved roads than pavement.