Before I began this trip, while still in the planning stages, I attended a couple of events where people who had ridden around the world or were in the process of doing so gave presentations. One of these events was Overland Expo in Flagstaff, Arizona; the other was a Horizons Unlimited meet in British Columbia. At both events, I heard a recurring theme from multiple speakers: that of travel burnout. I had noticed this in several blogs I had been reading as well. It seemed like most people hit a lull in their travels somewhere between six months and eighteen months into their trip.

The next leg of my journey ramps up the mileage and reduces the days off: no more taking a week to stay in one place. Beginning in January, I will need to cover just over 9,200 miles in 62 days. That still keeps me just under my 250 km/day limit, but I won’t get many days off unless I can cover more miles in a day. And I want days off between January and March because I will be in Patagonia, with some absolutely gorgeous scenery.

So in preparation for the next leg, I am taking a few weeks off. This will allow me to do some “housekeeping” chores, including obtaining my carnet (“car-nay”) for the bike, which is necessary for Africa. If you’re not familiar with a carnet, it is essentially a posted bond or guarantee that you will take the motorcycle back out of the country and not sell it while there. I also have to obtain a visa for Tanzania, the only country in Africa I will visit that requires a visa application in advance rather than obtaining it at the border.

In addition, I need to add some pages to my passport, as I’m running out of blank pages, and some countries will not allow you into their country unless you have a certain number of blank pages. As with many other aspects of this trip, these rules change as I go. For example, the United States just announced a couple of weeks ago that they will no longer offer extended pages for passports beginning January 1, 2016. The carnet process, which is difficult at best (and expensive), continues to get even more difficult: you can’t obtain a carnet in the United States. Until recently, U.S. citizens had to obtain a carnet through the Canadian Automobile Association. In March the CAA announced that it was no longer issuing carnets. So I applied through the Royal Automobile Club in London. Two weeks ago, the RAC announced it would no longer be issuing carnets.

I also have some medical follow-ups that need to be done before the end of the year, and this will require a return to the States.

The bike will be stored in Peru while I do some alternative traveling. I have a 90 day permit, so I have until February 16, 2016 to get out of Peru. Plenty of time.

Last night I rode a Hatun Pillko “Bus Cama” (literally Bed Bus, or Sleeper Bus) overnight from Huánuco to Lima. It’s a ten hour bus ride. I’m typically not into public transportation, or buses in general, so I was amazed at the comfort of the bus. You see these giant double-decker buses everywhere in Latin America. This is the first time I’ve been on one. It reminded me of riding the Shinkansen bullet trains in Japan. The bus was extremely quiet, and extremely smooth. They served a snack and drinks, had free wi-fi, and showed a movie (oddly, a Korean film with Spanish subtitles). The seats are somewhat like Business First class on international flights: they recline to nearly flat, and have a foot platform that joins to create a full bed, with partitions between seats. I have to say it was the most comfortable I’ve ever been on a form of ground transportation. At least once I got over the fear of riding in a bus in Peru. You have to remember, for the past couple of weeks, I’ve been on the other end of these behemoths, staring them down as they flew toward or past me. 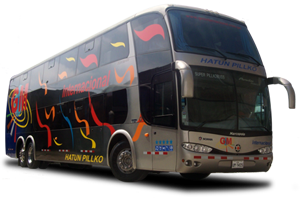 Very common sight throughout Latin America. The sight of one of these struck fear as a motorcyclist, but as a bus passenger, there’s no better way to go. 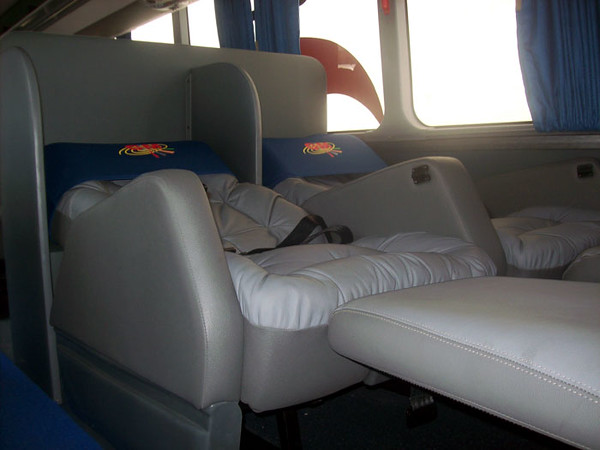 I arrived in Lima this morning and went to a concert tonight: one of my favorite California bands happened to be playing in Lima tonight. It was worth the experience, to see an audience of around a thousand people, most of whom don’t speak English, singing every word of their songs in English.

NOFX in concert at the Barranco Convention Center, which looks a lot like a House of Blues inside.

Lima is a large city. Miraflores, where I’m staying, is very clean and metropolitan, with a Starbucks about every three blocks. As I’ve mentioned before, I’m not much of a city person, but this one feels comfortable, at least for the short term.

So as I head off on intermission, don’t forget to check back here. I may not post much over the next few weeks, but I will hit the road again in Peru on January 8th and the following six or seven months will be a much faster pace, through Patagonia, Africa, Europe and Central Asia.

Stay tuned….and thanks for following along.