We had set up the tent in Dreux without the rain fly, but by 11pm the first drops of rain were hitting the tent, so I jumped up and quickly put the fly over the tent. It rained on and off most of the night, and in the morning it still looked dark and ominous, but a break in the rain had us scrambling to tear down camp and pack up before more rain started again. We packed up a wet tent and headed west.

It didn’t take long for the rain to resume. After about an hour, we pulled into a service area on the side of the highway (these usually have a gas station, a restaurant or two, and a store, and are accessible without leaving the tollway). We decided to have breakfast and wait for the rain to ease up. We ended up staying longer than expected, which allowed us some amusement as well. Here are a few views of “French-ness” that entertained us during this rainy day break.

Apparently it’s okay to take up motorcycle-specific parking spaces with your car as long as you turn your flashers on. This car sat here for more than an hour while it’s owners ate lunch. We retaliated by taking a car parking space closer to the entrance, which was available to them as well. (Note the “A” sticker in the rear window of the car. That stands for “Apprenti”, or French for “Learner”. It’s required for new drivers to display this sticker. It’s apparently not required for them to display their intelligence.

Likewise, it’s apparently acceptable to park your Mercedes in the handicap parking space and go inside to have lunch, as long as you leave your flashers on.

This is our electrical adapter plugged into a French outlet. Every other outlet placed it straight up and down. For some reason, this one placed it at a 45-degree angle. Thumbing their noses at the rest of the world?

A little more than two hours later, after having breakfast and lunch, we got back on the road. Today was only 160 miles, but we had one long stop planned in Caen, and we hadn’t planned on the rain or the long stop at the service area, so a short mileage day was still going to be a long day of riding.

We arrived at the Memorial de Caen, a large World War II and Cold War museum built atop a former Nazi command bunker. This museum is full of artifacts from World War II and particularly the Normandy beach landings, and the displays tell the story of the fall of France over a six week period during the war and the later liberation of France by American, British and Canadian forces. I have to admit that I knew just the basics about this part of the war, but the museum at Caen did a superb job of helping me understand the events leading up to D-Day, and the push onward from Normandy to Germany to end the war.

We were so focused on the exhibits and learning that we neglected to take many photos at this museum. It was well worth the visit and we’d like to return and spend more time there in the future.

Leaving Caen we had another hour ride to get to our campsite, which was located at Omaha Beach, a significant location of the D-Day invasion. 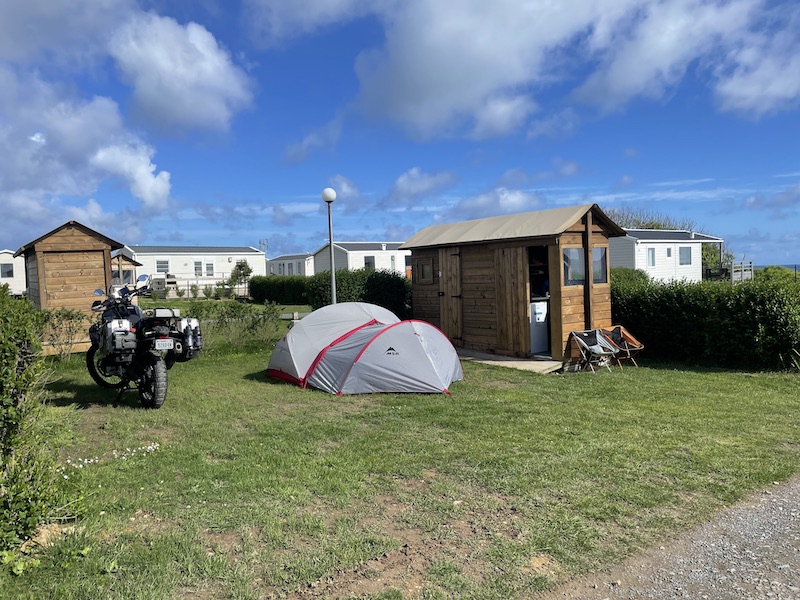 Our campsite at Omaha Beach. In addition to the overwhelming feeling of being on such a historic battlefield, this campsite was one of the nicest facilities we’ve stayed in. The small building next to our tent is two rooms: the front room is a kitchen with fridge, sink, prep counter and storage shelves, while the rear door is our own personal bathroom with toilet and shower. Just to the right of the white building on the far right you can see Omaha Beach.

It was a bit odd at first to notice that nearly all of the campers around us had German license plates. However, this is a place of historical significance to the entire world, and there is no denying that not only did a lot of Germans lose their lives here, but today’s Germans want to learn what happened here as well. I struggled to think of how it might feel to a German citizen seeing the entire area showing its’ thanks to America, Britain and Canada for liberating them from the German war machine. Somewhat similarly, we visited the memorial and museum at Hiroshima, Japan a few years ago, and at first I felt a bit uneasy being an American there, until you realize that everyone is welcome and encouraged to learn from our past.

The next day we had a long list of D-Day sights to visit, beginning with the Church of Sainte-Mere-Eglise. 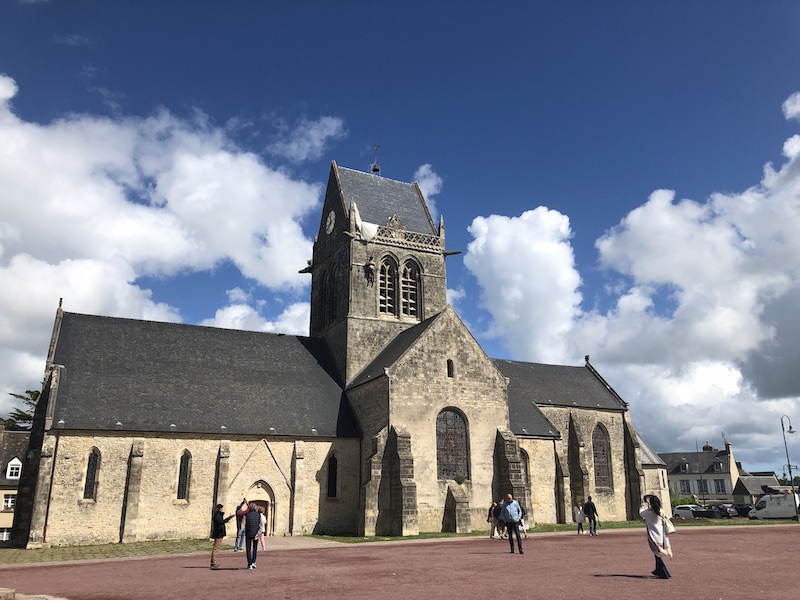 During the initial stages of Operation Overlord (the D-Day invasion), early in the morning of June 6, 1944 and under cover of darkness, paratroopers from the US 82nd Airborne and US 101st Airborne Divisions dropped into the town of Sainte-Mere-Eglise. A number of the paratroopers died when they became caught on utility poles and trees and were shot by German troops before they could cut themselves loose. 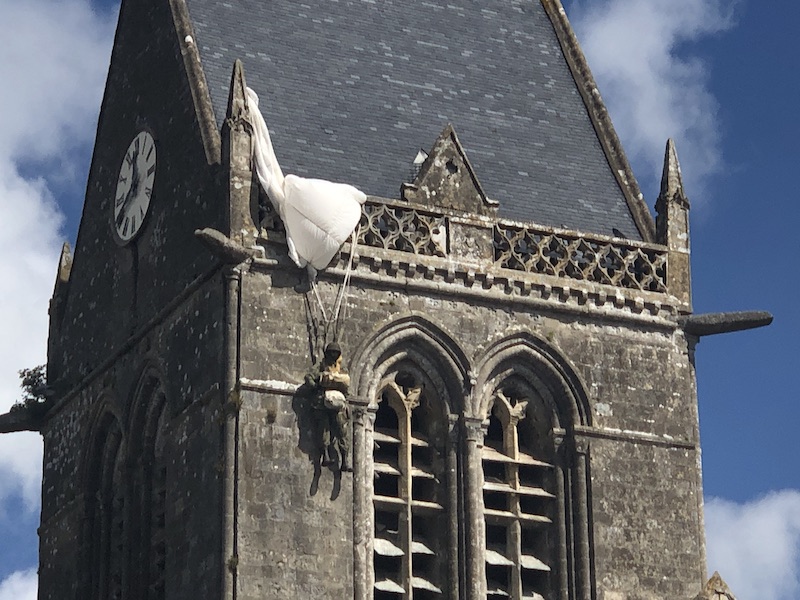 One famouse story involved paratrooper John Steele of the 505th Parachute Infantry Regiment, one of four regiments of the US 82nd Airborne Division. His parachute became caught on the town’s church spire, and he hung there for more than two hours, pretending to be dead, before German troops cut him down and took him prisoner. He later escaped. 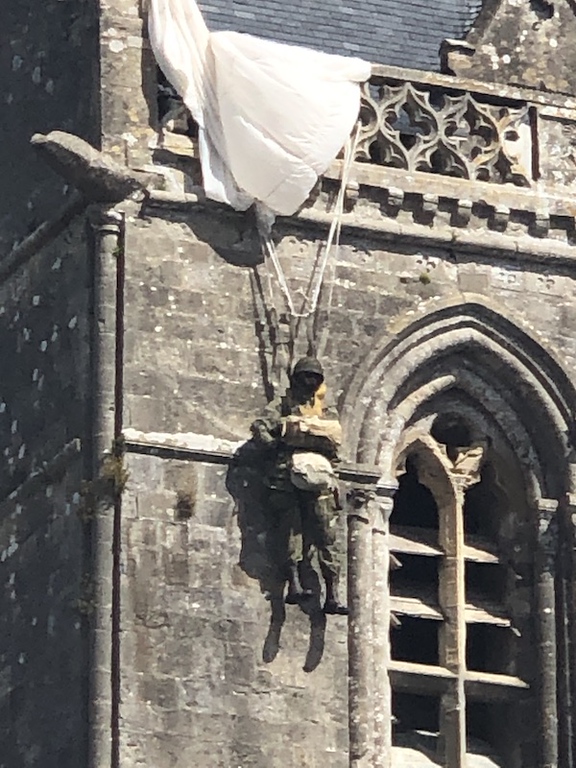 This monument was created on the church commemorating Steele’s story.

Then to Utah Beach and the Landing Museum there. 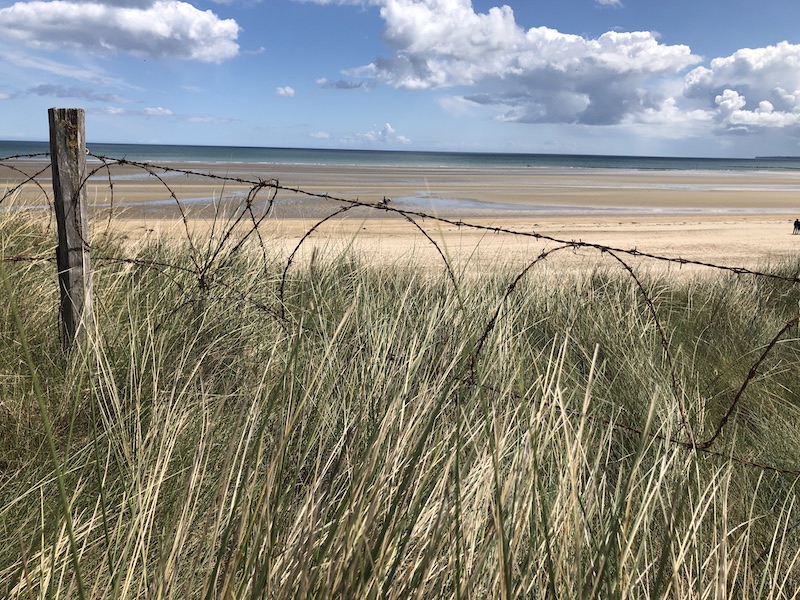 Looking out onto Utah Beach.

One of the many memorials to the men who fought at Utah Beach. Many of the first to land had the job of clearing a path across the beach for the men and vehicles that would arrive just behind them. The 4th Infantry Division landed 21,000 men on Utah Beach.

And on to Pointe du Hoc

Pointe du Hoc is a 110-foot high cliff just west of Omaha Beach. On the morning of June 6th, 1944 an assault force of Rangers in ten landing craft were to land on the beach and scale the cliffs, taking over the German guns in casements at the top of the cliffs. Once there, they were to fire flares to alert another larger force of eight Ranger companies to commence the second wave of the assault. But due to navigational errors, the initial force arrived late and lost their element of surprise. The larger second wave detoured to Omaha Beach instead. When the Rangers scaled the cliffs, they found the German guns were not there, which set off a search to find the guns and eliminate them to prevent firing on later landing forces.

These large casements were mostly empty, the guns having been removed earlier by German forces and moved inland to repair and refit while the casements were reinforced. The land around the entire area looks today like large, deep, grassy craters, which is of course what they are. The entire area had been bombed so heavily that the land is forever changed.

Then to the American Cemetery

The Memorial at the American Cemetery

More than 9,300 are buried here, most of whom lost their lived during D-Day or the following operations.

It’s a very beautiful yet difficult place to see.

And Longues Sur Mer, to the German artillery battery there.

The German artillery battery here is the only one that still has all of its’ original guns in place. 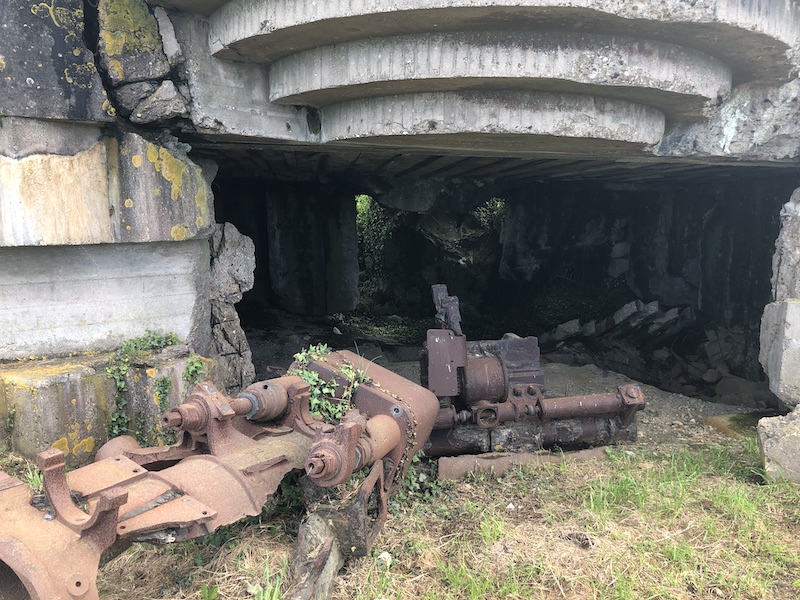 Some of the guns were obviously destroyed during battle.

The Longues Sur Mer battery was captured on June 7, 1944 and was not operational after that.

And finally Arromanches, where the Allies created an artificial harbor in order to bring men, vehicles and supplies in until they could capture and rebuild Cherbourg.

Our time in Normandy had been too short, but our understanding of the great sacrifices that were made here to turn the war had grown tremendously. There is much more to see and learn here, but with an enriched view of the battles we can now do more research and hopefully return soon.