John o’ Groats is not a town. It is simply a tourist attraction. There is a signpost here, a couple of gift shops, a tourist information center and a few other buildings. Having watched “Long Way Down” a long time ago, I knew of John o’ Groats from that show, but had somehow missed the fact that there is nothing actually here.  It also turns out that it isn’t the northern-most point on the mainland UK; nearby Dunnet Head holds that claim. However, it is apparently the longest distance from Land’s End, which is the southern-most tip of the mainland UK. Seems to me they had to stretch to come up with something to draw the tourists.

View from my campsite outside Durness.

Further north of Durness on the way to John o’ Groats.

I would have liked to go further north into the Orkney Islands, but I’m limited on time due to my booked ferry crossing to Isle of Man on June 7.

The weather in the far North is severely overcast but not raining, and very cold. I’ve had the heated grips on 75% heat for a couple of days now, so I continue south down the east coast of Scotland to Dornoch Firth, where I make my first truly bad camping decision.

On occasion I’ve been staying in Caravan Parks rather than wild camping. Usually this is because there is hot water, showers, flush toilets, and sometimes a camp kitchen which allows me to cook without using my stove, saving gas.

“Caravan Parks” here are typically a large lawn, with nothing else, save for possibly electrical hookups. Not a tree. Or a BBQ grill. Or a fire pit. Or anything else. Most visitors are in cars pulling travel trailers (“caravans”), or motorhomes, or VW vans. This week, there’s been a number of motorcyclists as well.

Tonight, I am introduced to a new term: “static caravan”, which is known in the U.S. as a mobile home. Thus, the “caravan park” I chose to camp at is primarily a mobile home park, with a large lawn full of electrical connections for the people who show up in trailers, motorhomes, and tents. For those of us who don’t need an electrical hookup — correction, for me, since I am the only one apparently who doesn’t want to pay for an electrical connection — there’s a separate area against the dunes with no facilities. In fact, the nearest showers and toilet are on the other side of the Great Lawn. For this I am charged fifteen pounds, a bit more than $21.  I could have driven outside of the caravan park, and camped in the dunes for free, and had a better experience.

The next morning I head towards Loch Ness, and the Loch Ness Exhibition Centre. Just before I get a good view of the lake, Dunrobin Castle comes into view. 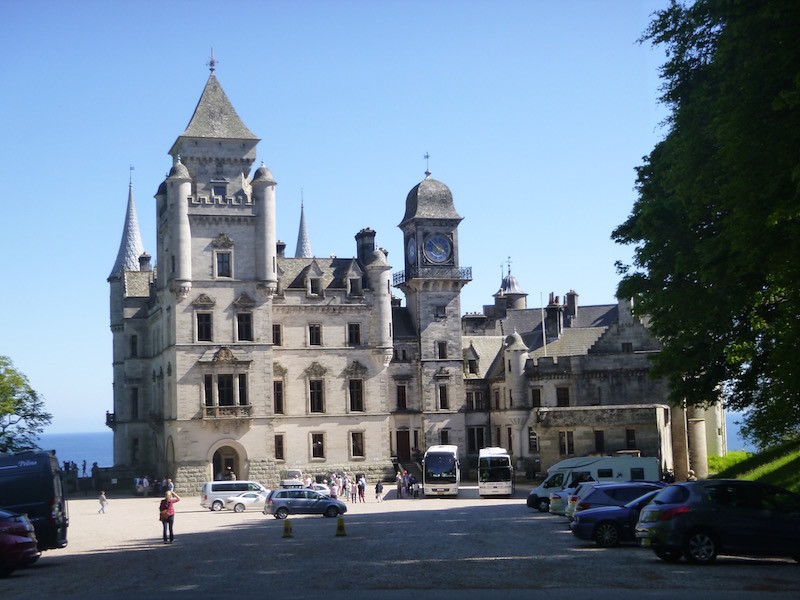 Just down the road, I get my first good view of Loch Ness. I had no idea it was so huge. I had always pictured a small quiet lake in my mind. This thing is huge. The signs at the roadside park give a couple of interesting facts:

The lake is 23 miles long, and very deep, reaching 230 meters (755 feet) in depth. As I stand looking at the lake, I notice a single “wake”, which looks kind of like a large, long rope of water, even though there is no boat anywhere in sight. The reflection of sunlight off this single rolling wake gives it a dark, odd look. I can understand why people see things in this lake. 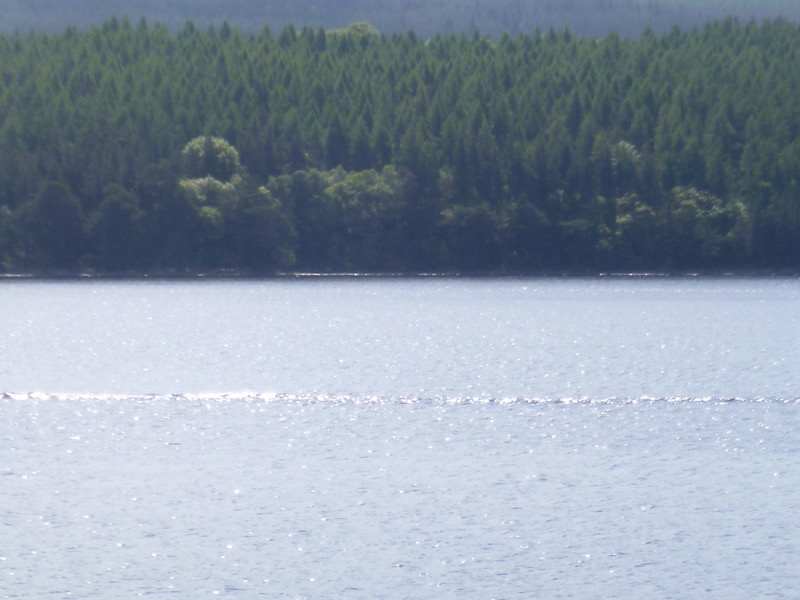 A bit too long for a serpent, and kinda flat, but oddly interesting considering there was nothing around to make it.

At the Loch Ness Exhibition Centre, I am surprised at the theme. The center is in a former castle/hotel. and is well done. The presentations are in a chronological order, moving room to room and showing a video presentation in each room. But it’s the “disproving” approach that surprises me. The exhibition takes the claims, photos, and other information about the lake monster, and systematically aims to disprove each one, concluding that there is no monster and everyone is mistaken in what they have seen.

I personally don’t tend to take a stance one way or the other, and it surprises me that a place famous for its’ monster has put so much effort into proving it doesn’t exist. Still, I enjoyed the hall, and the information presented, including the WW II plane that was discovered in the lake while using sonar to search for large marine life, and the attempt at the world speed record on the water that ended badly when the then-world land speed record holder was killed after reaching 200mph on Loch Ness.