I’ve been at Jungle Junction in Nairobi for a week now. I spent the first three nights in my tent. After the third night (two of which it rained quite a bit, but I sleep well in the tent in the rain), I had to pack up the tent between rainstorms so it could go into the crate with the bike. So I moved into a dorm room, which raised my nightly lodging from $5.95 to $11. I was the only one in the dorm, so it was like having a private room with a bunch of extra beds.

I had a lot more mosquitoes in the room than I did in the tent. I’ve learned how to enter my tent without letting the mozzies and flies in, but the room has open windows and no screens, so the mosquito netting on the beds is essential. The first night in the dorm I didn’t use the netting and slept terribly due to the constant buzzing in my ears.

Once the bike went into the crate (early in the week), I had no transportation, but Craig and Jen from Australia were nice enough to let me ride one of their CRF250s to the bank (through flooded Nairobi). I had to take out a cash advance on my credit card in order to pay for the bike shipping. That took a couple of hours, and a bunch of forms, and the bank had a limit of 100,000 Kenyan Shillings per day (about USD$995), which wasn’t enough to cover the shipping cost. A few more trips to the ATM over a couple of days eventually got me enough cash to pay shipping, lodging, meals, etc. By the time I got enough cash to pay for the shipping, I felt like I had applied for a mortgage at the bank. The amount of paperwork for a cash advance on a credit card, not to mention the time involved was suffocating! Similar to banks that I experienced in Argentina, you take a number when you enter the door, then sit in a large waiting room and wait for your number to be called. There were two teller windows open, and regardless of the transaction, each involved a lot of paperwork, a lot of conversation, and a lot of running back-and-forth by the teller.

I eventually got the bike onto a truck and delivered to the shipper’s office near the airport, along with my carnet, where it sat for another day before they finally took it to the cargo terminal and cleared it through customs (More on all of this in the next post). After five days, it was now officially stamped out of Kenya, and one step closer to leaving on a plane. Closer being the key word. Not done. Just closer.

Unfortunately, without transportation, I was unable to visit several places I had hoped to see in Nairobi. Particularly, the Karen Blixen house and museum, which were only about three miles from where I was staying. I had considered taking a taxi, but due to the ongoing shipping issues, and the weather, I was stuck at the camp most of the time. 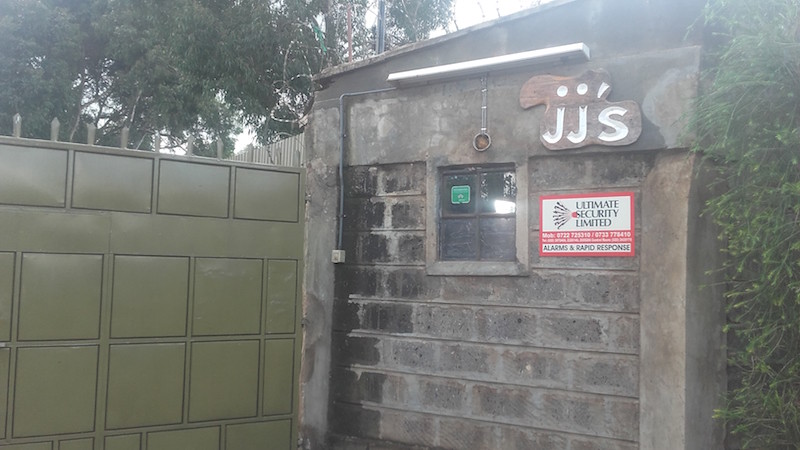 For those reading along that may be considering a similar trip into Nairobi, this is the place to stay. If you have trouble finding the entrance, note that the sign outside the gate doesn’t say “Jungle Junction”, but simply “JJ’s”.

The area of Nairobi where I stayed is near Karen, which I thought was an odd name for a suburb in Kenya, until I realized it was named after Karen Blixen, the Danish author whose autobiography under the pen-name Isak Dinesen was later made into the movie Out of Africa. The farmhouse where she lived here in Nairobi was also used for the movie, and is now a museum. Much of her once 6,000 acre plantation is now suburban neighborhood.

Across the street from the Blixen museum is Marula Studios, the home of Ocean Sole, a “flipflop recycling company”. According to their website, each year thousands of flipflops are washed up onto East African beaches. These are collected by volunteers and at Ocean Sole they are turned into sculptures. Pretty cool recycling, actually.

Yep Used to be flipflops. 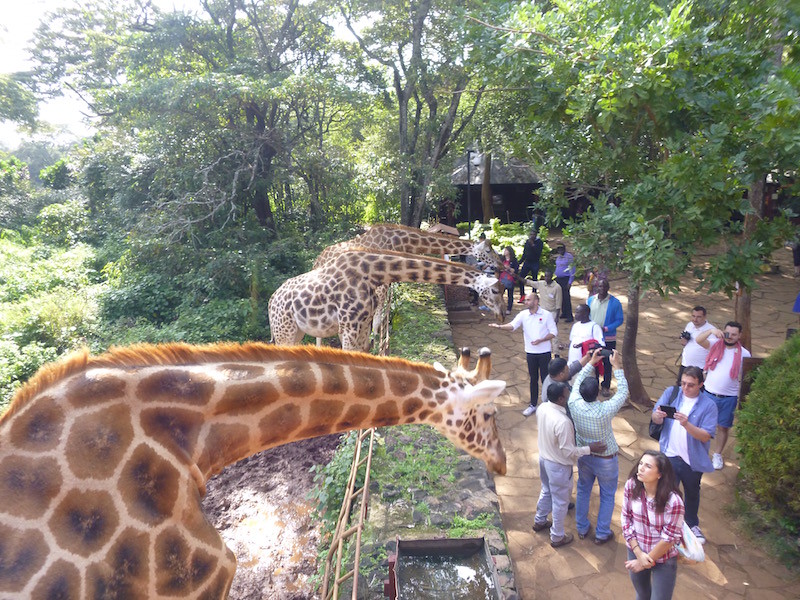 The giraffes know where the food is at the Giraffe Center.

Put a pellet in your mouth and get a kiss from a giraffe.

There’s an elevated deck where you can interact with the giraffes at their level.

This is my buddy Eddie. He actually knows his name, and will come when you call him. Either that, or he thinks “Eddie” means “Food”.

Eddie was my buddy as long as I had food. Once the food ran out, he quickly became somebody else’s buddy.

Also near here is the David Sheldrick Wildlife Trust and Elephant Orphanage, which focuses on raising orphaned baby elephants for return to the wild. This facility also allows public interaction with the baby elephants for one hour a day.

Craig & Jen saw a break in the weather and packed up their Hondas and headed out Friday afternoon towards Lake Turkana and Ethiopia. 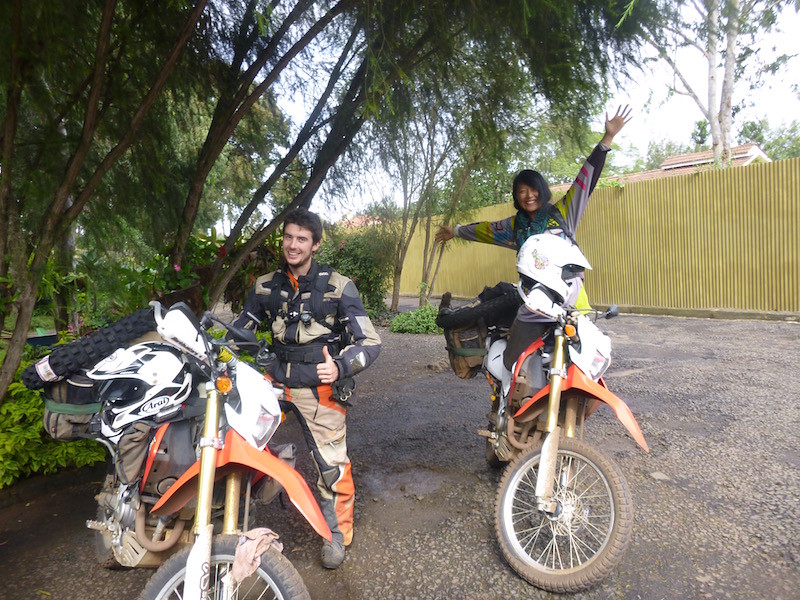 Craig & Jen, off for Ethiopia.

I was jealous and wished I was going with them, but with a U.S. passport, I would only get so far heading north through Sudan and Egypt. I still want to do that route, and I will, but it may be a few years. Hopefully by then the political climate will be better.