For those who don’t know me well, I’m a bit of a hermit. I enjoy traveling, but absolutely hate crowds; especially the American kind (loud, obnoxious, entitled, etc). In this vein, the thought of going to Zion National Park — and other parks in Utah — has been stressing me out. As much as I want to hike The Narrows, I don’t really want to listen to two thousand other people oooh and aaah and generally tell their life stories loudly while I hike.

So when we discovered Natural Bridges National Monument, it seemed like the right direction: small park, smaller crowds, and still some good hikes and sights.

There are three large arches or natural bridges in the park that you can hike to the bottom and back. There’s also a campground. The campground is first-come, and only has 13 spots, so we left Mancos with the intent of getting to the campground early afternoon and hopefully there would be an open spot. If not, our backup plan was wild camping on BLM land just outside the park.

We arrived around 1:30pm, and found there were three spots still open. So we set up and relaxed for the rest of the day, while we watched the parade of motorhomes drive through looking for an empty place to park. Even though the campground is at 6,500 feet elevation, it was 87 degrees in the afternoon, and the sun was blazing.

The next morning we hiked to the bottom of the canyon to Sipapu Bridge and Kachina Bridge, and also hiked out to the rim to look across to Horsecollar Ruins, the remains of an ancestral Puebloan cliff dwelling. 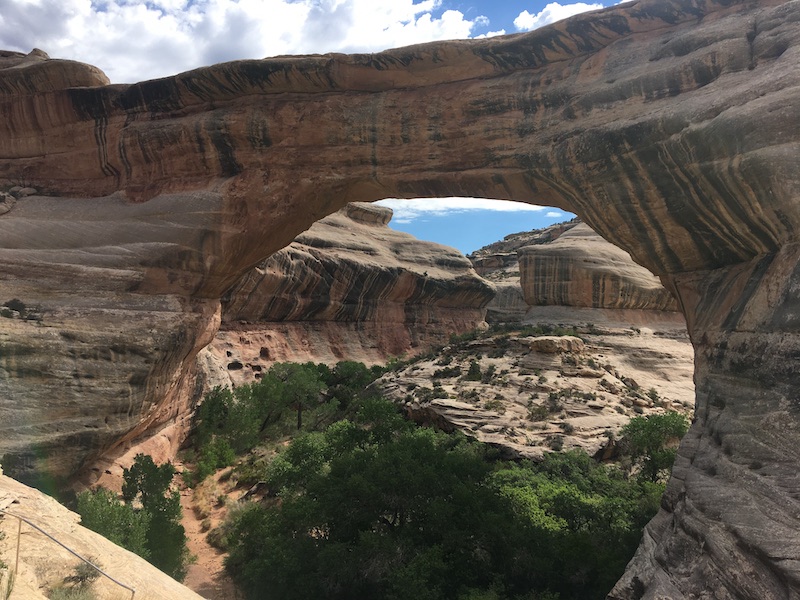 Sipapu Bridge is the second largest natural bridge in the world; only Rainbow Bridge in Glen Canyon is bigger.

The trail to the canyon bottom is the steepest in the park. A staircase and three wooden ladders aid in the descent.

What goes down must come up…the elevation and the heat gave us a good workout.

Hard to see in this photo (nearly impossible actually), but there are cave-dwelling ruins at the lowest level on the opposite canyon wall here. 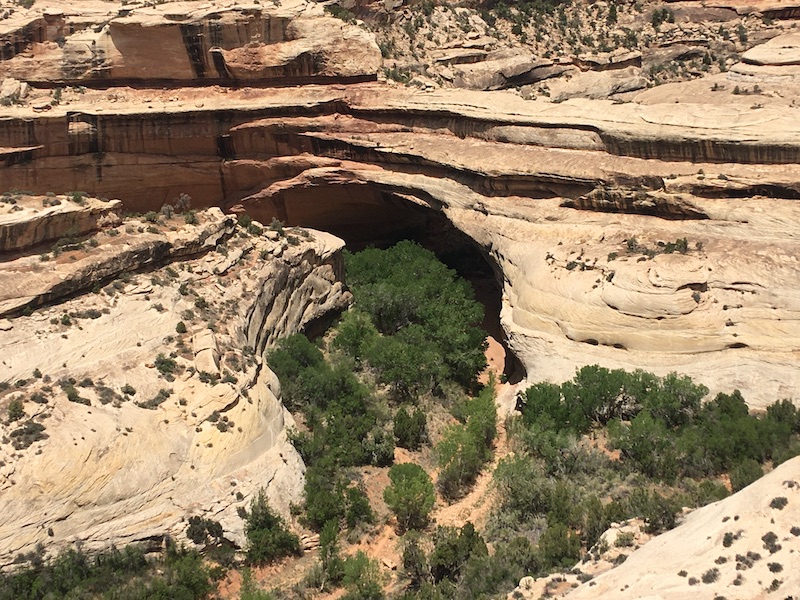 Kachina Bridge as seen from above.

The Kachina Bridge is the youngest of the three. 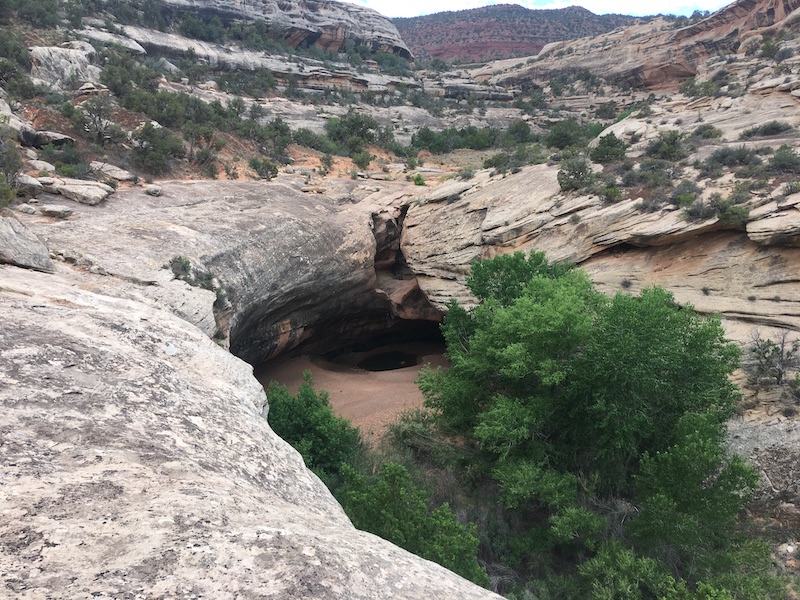 Just to the left of Kachina is a “Knickpoint” pour-off into a small pond. When it floods here, a muddy red waterfall plunges into the pool below.

On our approximately four mile hike, we met an average of two people per mile. Quite a difference to what I expect Zion to look like.

On our second night in the campground, it was nearly empty. We couldn’t figure out why on a Wednesday night it was packed and had an overflow of people who were too late for a spot, while on Thursday night practically nobody showed up.

At the campground we met a German woman from Seattle traveling in a Honda Element, who gave us some great tips on Azerbaijan and Czech Republic, and just before leaving we met two women from Seattle and San Jose doing a two week tour on a Ducati Scrambler and a Honda. It’s great to see these others (especially women) traveling solo or together on adventures.

Tomorrow will be a hot one: It will be close to 100 degrees as we head south into Arizona before heading north again back into Utah.