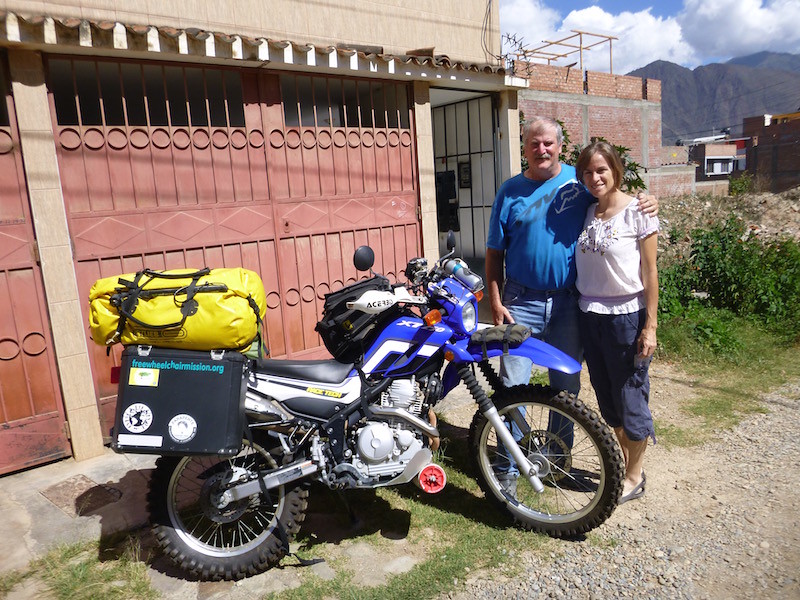 Toby & Sara, my hosts and bikesitters in Huanuco. Thanks guys!

I have been in Peru for a little more than a day, and on the bike again for about ten minutes. I’m sitting in bumper-to-bumper traffic. I guess it’s actually bumper-to-taillight traffic, since I don’t have a bumper, and the car behind me is pressed against me. Motorcycles are splitting lanes, squeezing between traffic heading south and traffic heading north. With my panniers, I’m too wide to risk splitting lanes into oncoming traffic.

Heading in my direction (south), to my left is a collectivo mini-van. To my right is a Bajaj moto-taxi. To his right is another moto-taxi on the shoulder. Did I mention that this is a two-lane road? Yes, the mini-van, me, and the three-wheeled moto-taxi are all abreast in one lane. Actually, the mini-van is hanging into oncoming traffic, defending his position. That’s just the way it’s done here. But I’ve been off the bike and away from this craziness for several weeks. My heart is racing, my palms are sweating, my eyes are constantly darting left-to-right, ahead-to-rear view mirrors.

It stays like this through Huanuco and out of town about another three miles. Eventually, we arrive at the problem: a truck has gone off the side of the road and down to the river. I can’t see it from my lane, but there are large crowds on the adjacent bridge and along the road, watching. Others are hauling boxes of cargo up the bank one at a time. The road clears and I have clear sailing for another twelve miles or so. Following the GPS, I turn off and through Ambo on Highway 18, where the road turns to gravel for the next sixty miles.

Another thing I have forgotten in my weeks off: don’t blindly follow the GPS. I knew this. I am reminded of it when I ride through Yanacocha and my Garmin keeps looping me around the same two streets. It is clearly confused. I stop and ask a gentleman on the sidewalk and he points to the top of the mountain. Makes sense. I’m in a valley and I have to go southeast. That would be up, from here.

As I get to the top, it’s getting cold, and looking like rain. I’ve climbed above 14,000 feet again. I stop and close the vents on my riding gear and I am much warmer immediately. 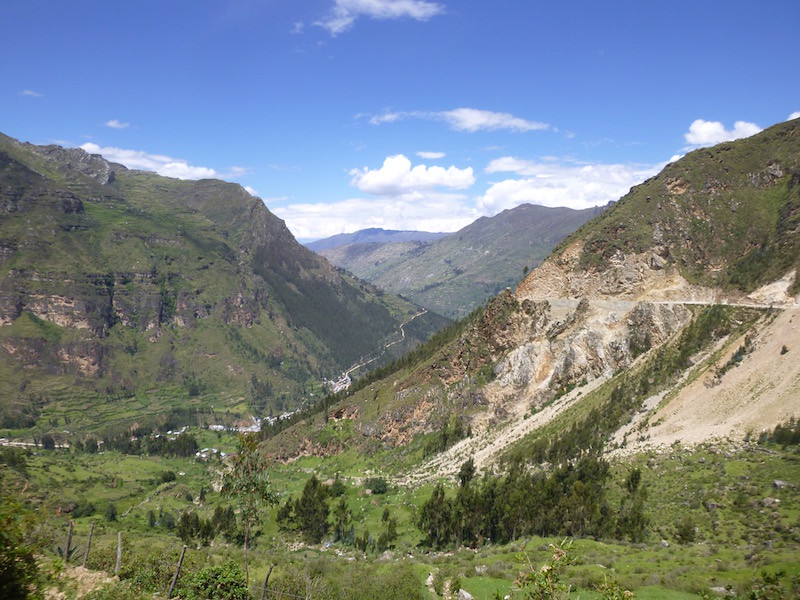 Looking back down on Yanacocha after finally finding the way out of town and up the mountain.

The view turns to wide open alti-plano. This is a huge high plain with small lakes scattered about, and far across, on both sides, I can see snow-covered peaks.

Can someone tell me what these birds are? They were beautiful to watch around this high plains lake.

A little further along, I pass through a tiny town in the middle of nowhere on the alti-plano. The large purple glass ball is visible from miles away, and looks like a giant radish or grape from a distance. 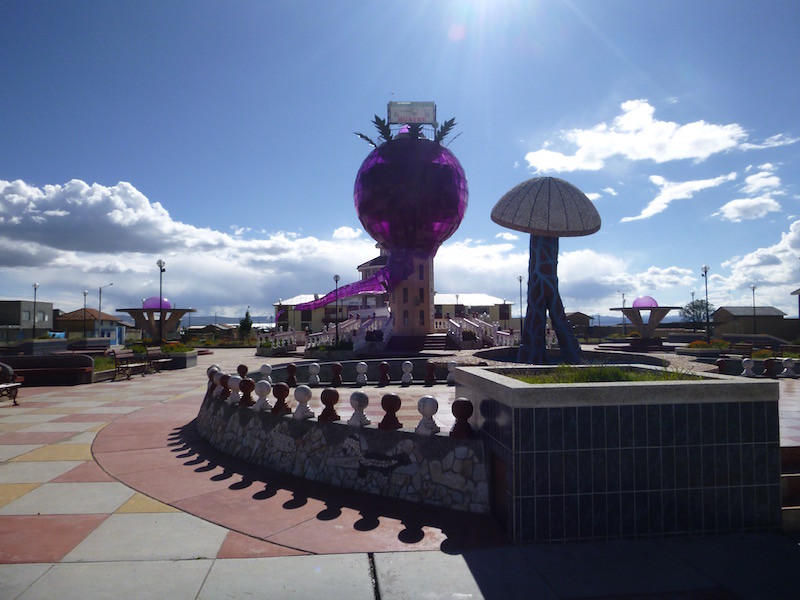 Alien playground in the middle of nowhere, or something from HR PuffNStuff? Ok, I really dated myself with that comment.

Several villages in this area are selling maca juice and other products made from maca, a root vegetable grown on the altiplano.

I follow the road to Cerro de Pasco, and arrive just before running out of gas. I have replaced my 1.75 gallon Rotopax fuel can on the rear rack with a 3 gallon version, but I didn’t stop and fill it before leaving Huanuco, so I’m glad the gas station showed up when it did.  The woman attendant looks at me puzzled. I made the mistake of telling her I want to fill the can on the rear rack, but the can is lying down and she can’t figure out how to fill it. Doh! Hang on, let me take it off the bike first!

Two more attendants approach and we have a conversation in broken Spanish (I’ve lost a bunch of words in the last three weeks. I’m sure they’ll come back with a little more conversation.) The three of them are very curious about my bike, my riding suit, and why I came this way when I could have just ridden down the paved highway from Huanuco. Yes, thanks, I realize that. I can’t begin to explain that my GPS routed me this way, as they’ve never seen a GPS like the one on my motorcycle. But they’re having a great time watching the screen as I enter the next destination.

In the end, I’m glad for the detour, as I saw a lot that I wouldn’t have seen had I taken the shorter, faster way.

Due to the extra time taking the gravel road for sixty miles, I arrive late in Huancayo, but the Hotel Rey is nice, clean, friendly, with indoor parking and under twelve dollars. Along with the large bowl of Caldo de Gallina (chicken noodle soup) next door for dinner ($1.20), it’s been a good day for the budget.

9 thoughts on “On The Road Again…Finally!!”