We once again listened to the rain on the tent all night, but this time along with a strong wind that we hoped would help dry the tent quickly. By morning the rain had stopped, and we happily packed up a damp tent in cloudy but dry conditions.

As we were packing, our neighbors in the only other tent in the camp stopped by. They’re from France, and are taking four months off to ride bicycles from France to Greece. There are undoubtedly easier routes to pedal than where they had been and were going, but they had a great attitude. Interestingly, they asked us about our tent — a MSR Hubba Hubba NX with the optional gear shed — and then pointed to theirs, a MSR Hubba Tour 2 tent, which has the gear shed (and rain fly) built in. The two tents look nearly identical when set up (with the rain fly on ours). But there is a big difference. Theirs is the same model of tent we used last year on our ride to the Arctic Circle and Prudhoe Bay, and they quickly confirmed the same problems with it that caused us to switch: while the Tour 2 is a simpler set-up due to the gear shed and rain fly being all one piece, the lack of ventilation due to this design causes high humidity and trapped heat in the tent, making it fairly miserable in even moderately warm weather.

Diana and one of the owners of Kamp Vrhpolje. He asked if he could take a photo of our moto, because we are the first people from the USA to arrive at Kamp Vrhpolje on our moto. They loved the Texas license plate. We loved being the first Texas motorcycle here. 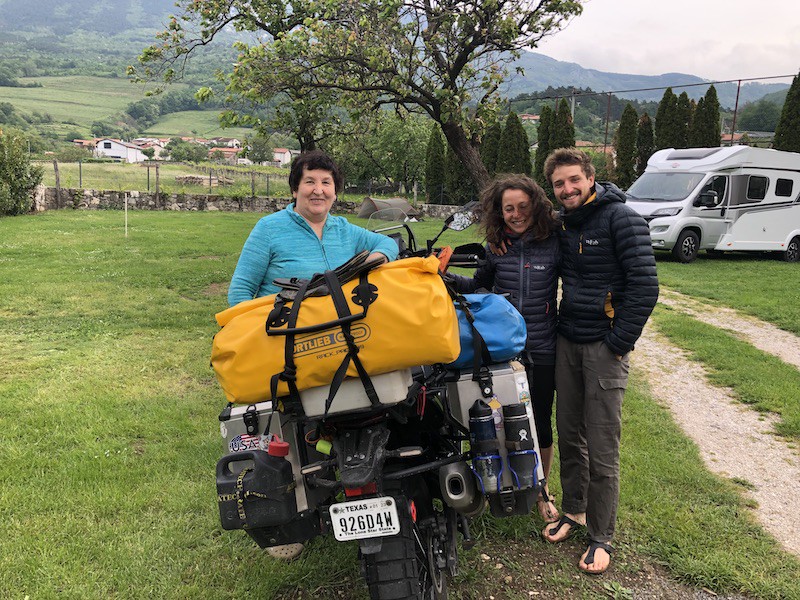 The other owner of Kamp Vrhpolje (Damjana?), and the two French bicyclists. You can see their brown tent in the background. There’s a chance we might run across them again on our way back through Slovenia in a couple of weeks, although they are taking a different route south than us.

We said our “Hvalas” (thank you in Slovenian), and left Vrhpolje around 9am. It’s about 20 miles from Vrhpolje to Postojna Cave, and we had tickets for the 10am tour. I figured an hour was plenty of time to ride 20 miles, get out of our gear, cover up the bike and make it to the tour in time.

We made it a few miles down the highway when the Garmin GPS (now referred to as “Garbunckle” by Diana) told us to exit, and then took us down a winding two-lane road through small villages (24 to 31mph speed limit), before pointing us up a dirt road. I thought, “well, why not? A little off-road time is overdue.” Time was getting tight though, and eventually we popped out and Garbunckle said “You Have Arrived” at 9:50am.

Indeed, we had arrived. At Predjama Castle. Not Postojna Cave, which was 5 miles away.

Ugh. Back to the dirt road, this time blasting down it, and arriving at Postojna Cave parking area at 10:02am. Too late. Fortunately, for a small fee, we were able to move our tickets to the 11am tour. Which gave us a little time to relax.

At a few minutes before 11, we walked over to the sign that read “English Tour”. There were other signs for the tour in Italian, Slovenian, German, and a few other languages. We were surprised to find that not only was the English tour the largest group by far, at around a hundred people, but the two of us appeared to be the only people on the tour for whom English was the first language. There were no other Brits, Americans, or Aussies on the tour. Most people seemed to be perhaps Greek, Polish, or Croatian.

The cave itself is fifteen miles long, but only a little over three miles are open to the public. Still, the place feels massive, and although I haven’t been to Carlsbad Caverns since I was about 12 years old, this place puts it to shame as far as I’m concerned.

The tour starts with a train ride into the cave. The cave was originally discovered in 1818, and in 1872 rails were laid and a gas powered train was used to access the first two miles of the cave. After 1945, an electric train replaced the gas train. At the end of the train ride, the one hour walking tour begins. 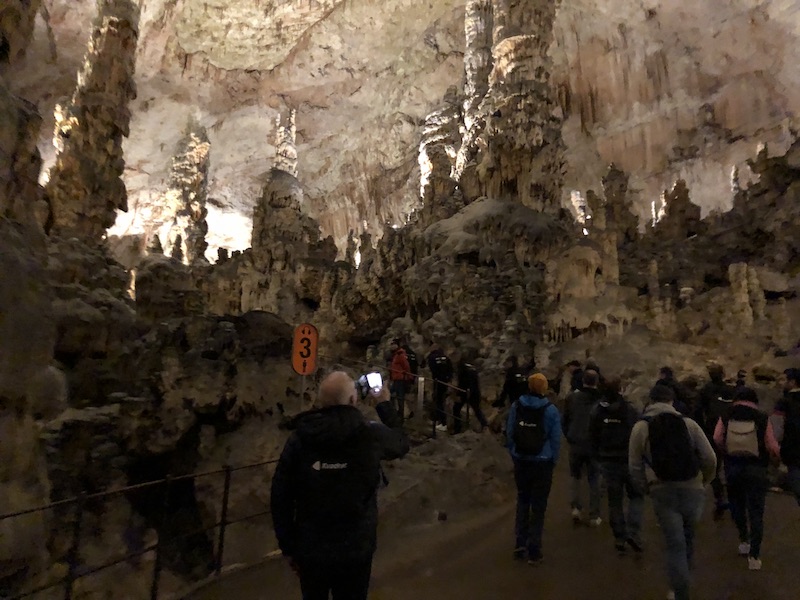 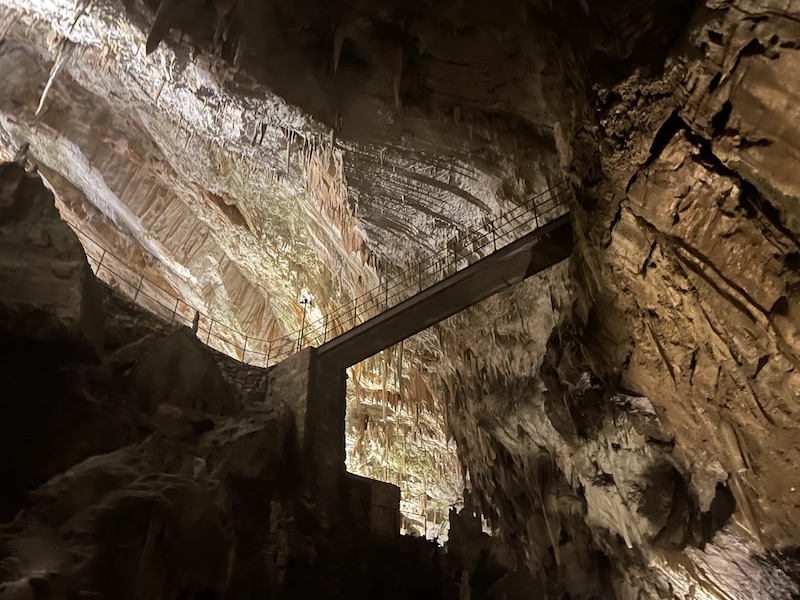 After our cave tour, we headed back to Predjama Castle. This 800 year old cave castle sits in the middle of a 400 foot tall cliff.

The original castle dates back to the 1200s, but it has been destroyed and rebuilt a couple of times. The current castle dates to the 1570s and has changed little since then.

Getting back on the bike in both the parking lot at Postojna Cave as well as at Predjama Castle, I noticed people walking by, then stopping and pointing out the Texas license plate to their friends, who just stared. We’re used to being approached by people who ask “did you ride that all the way here?”, but so far most people here haven’t approached us. Which is okay too; it does get old after a while. But it’s always an easy way to start a conversation.

We left Predjama on a relatively short 60 mile ride to Ljubljana, the capital of Slovenia, where we will spend the next couple of days. Tomorrow we plan to do a bit of a walking tour of sights in the city, weather permitting. Then it’s on to our next country.

9 thoughts on “Postojna and Predjama”