I flash back to that scene from National Lampoon’s Vacation where Clark Griswold is trying to get the family back in the car quickly at the Grand Canyon. His wife says “Don’t you want to look at the Grand Canyon?” and he turns, faces it, nods a couple of times and says “Okay, let’s go.”

Unlike my prior travels, we have sort of settled into a tourist’s checklist of things to see in this area. There are so many things in such a small area that it almost becomes “Speed Touring”. Because we have upcoming commitments, we have two days in which to see a half dozen or so national landmarks, parks, and monuments.

We have intentionally planned this route for a month later than originally thought. Had we not been allowed to enter Canada and gone on to Alaska at the beginning of August, we would have ended up here during that time, which is also the same time of the Sturgis Motorcycle Rally, an event I have worked hard to avoid over the years. Now, as we ride through the Black Hills, there are Harley Davidsons here and there, but nowhere near the quantity, volume or obnoxiousness of that August time frame.

We ride through the Black Hills to Custer, SD, stopping at the Crazy Horse Memorial, before continuing to Custer State Park’s Wildlife Loop, and then on to Mt. Rushmore. These are all places we learned about in school, and are familiar with, but have never visited before now. 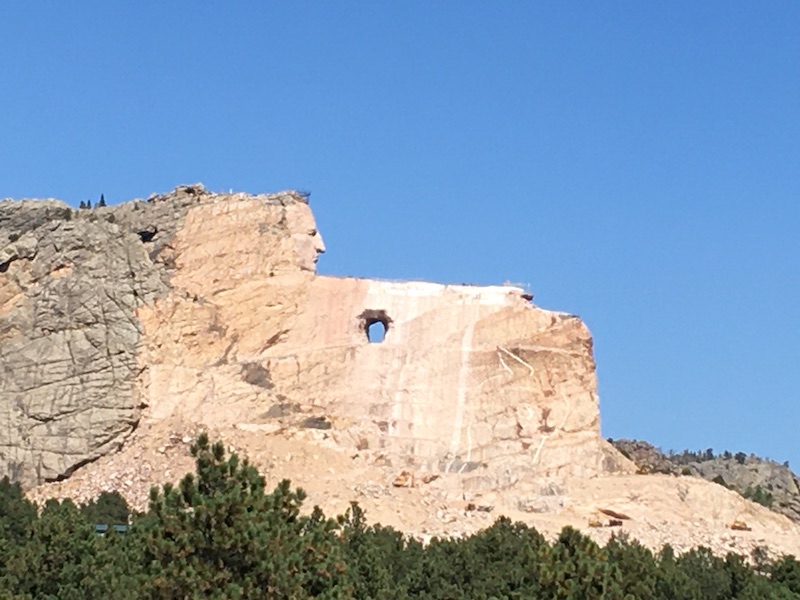 Crazy Horse Memorial, just north of Custer, SD. A work in progress. We learned quite a bit about the Lakota people in our short visit here.

Custer State Park has an 18 mile long Wildlife Loop, that unfortunately was closed at the nine mile point. We rode 8.9 of those nine miles without seeing any wildlife, but at the turnaround point we were treated to a huge bison herd.

In the herd were these three donkeys. They are descendants of the original pack animals that were used to transport visitors from Sylvan Lake Lodge up to the summit of Black Elk Peak a hundred years ago. And while we saw signs for hundreds of miles through all the parks asking visitors not to feed the wildlife, apparently it is common for people to bring these “begging burros” snacks. 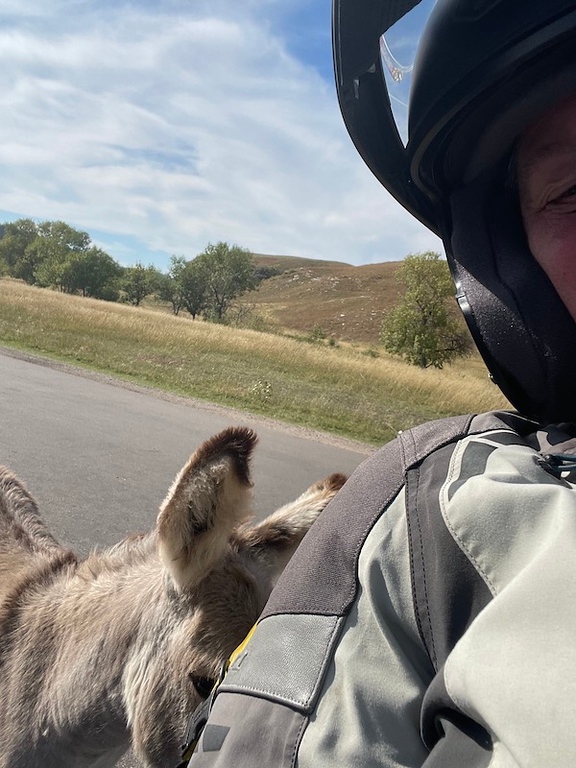 Thankfully the bison haven’t taken up the begging habit. 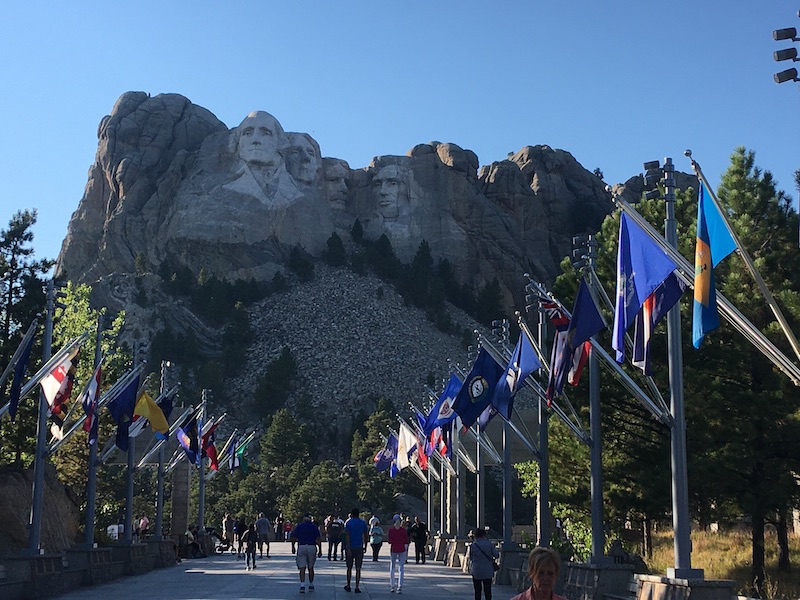 The walk out to the viewing point at Mount Rushmore includes flags and information on all of the US states and territories. 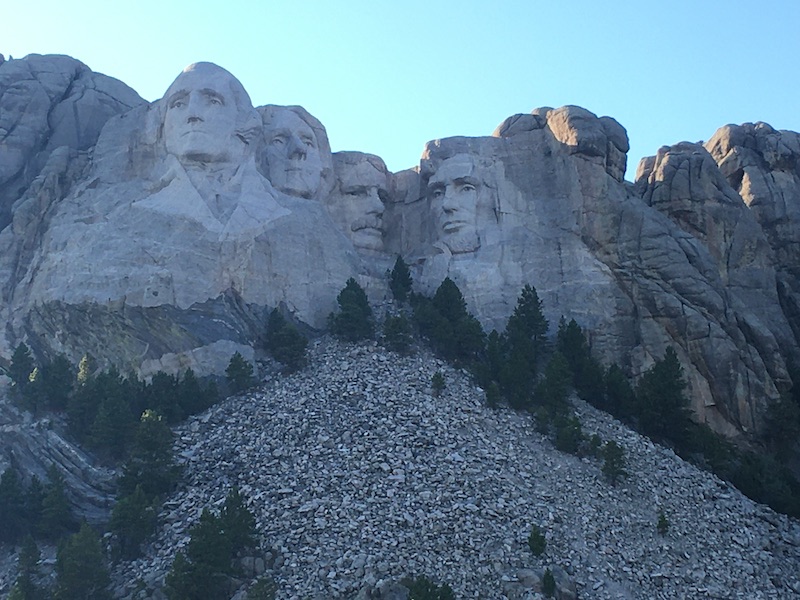 Two of our favorite fun facts learned at Mount Rushmore: Jefferson’s original face had to be blasted off of the mountain. It was originally to the left of Washington, but after starting to blast away and carve, it was determined that there wasn’t enough good granite to put it there. You can still see the blasted area where it once was. And the pupils of the eyes stick out 20 inches. This, along with polishing the surface of the pupils, gives the eyes a more lifelike appearance.

By the end of the day, we are surprised at the amount of scenery and history we have viewed, and we are only half way through this Speed Tour Loop. We find a place to wild camp a few miles down a dirt road near the National Grasslands, and have one of the best nights’ sleep of the trip. 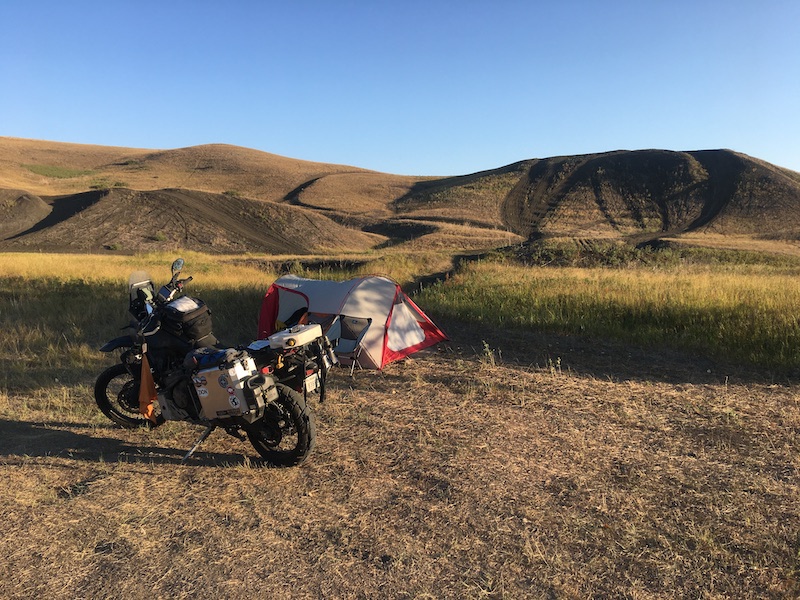 One of the quietest, cheapest, best night’s sleep of the trip was in perfect weather conditions in South Dakota.

Although this is part of the National Grasslands, it happens to be an Off Highway Vehicle park. When we arrived, several people on dirt bikes were just loading up to leave. It was tempting to take the panniers off the 700 and do some hill climbs, but we still had a long ride ahead of us.