It seems that Sunday somehow was a perfect storm of bad weather and road conditions. We rode all day in rain with temperatures around 42F, and the road from Meziadin Lake to Dease Lake was full of potholes and under construction, with sections of dirt and gravel. We stopped at Dease Lake when we grew tired of the beating we were taking from the weather and the road.

Yesterday was like a light switch had been flipped. We left our cabin under sunny skies and temps in the low 60s, and from the moment we pulled back out onto the Cassiar Highway until we pulled off the Alaska Highway in Whitehorse, Yukon, some 400 miles later, there was not a single section of gravel, dirt, or construction, and practically no potholes as well. In fact, one 25 mile section from Boya Lake to just south of the Alaska Highway junction was racetrack smooth and downright fun. AND Diana got to see her first moose.

At the end of the Cassiar Highway where it meets the Alaska Highway, we detoured fifteen miles east on Highway 1 in order to get gas in Watson Lake and visit the famous Signpost Forest. 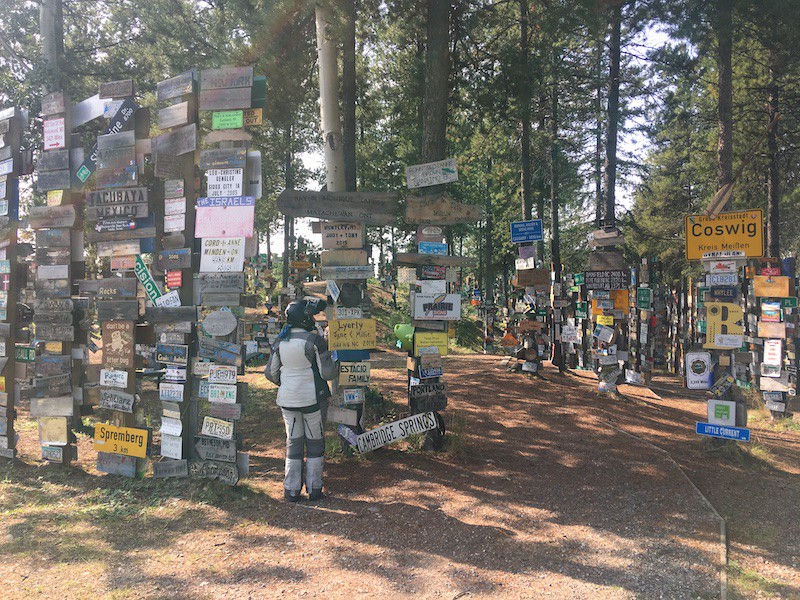 As we passed the signposts on the way to the gas station, we immediately saw the San Marcos, Texas sign facing the highway. I wanted to put a 2RideTheGlobe sticker on it, but it was too high to reach.

So we searched for a Wimberley sign, but never found one (I’m convinced it’s there, but it would take a day or two of searching to find it). We ended up finding an Austin sign and left our mark (just above the “n”). (Btw, how long ago was this sign put here, if the population was 21,907? I’m thinking this could have been Austin, Somewhere Else, but the Texans have hijacked it.)

This sign reminded me of “The Thing” signs across Arizona back when I was a kid and we would do family road trips. “Thru Road…Is it or isn’t it?”

Near Teslin. Diana’s first Moose sighting. But not the last.

We had originally planned to take Tuesday off, but since we lost four days trying to get into Canada, we decided to push on to Whitehorse. We are now less than 300 miles from the Alaska border, and less than 600 from Fairbanks.