The rain held off just long enough to allow me to pack up my camping gear in Cusco and get on the bike. Before I could leave town the rain began again and it continued on and off most of the day.

The scenery was mostly altiplano: few trees, lots of open plains, with mountains surrounding. At one point there was quite a bit of snow on one of the mountain peaks. I don’t think I gained or lost much altitude. It turns out my campsite in Tinjani Canyon was at 12,800 feet elevation.

Looks kind of like a toy train set, only with bigger mountains. The Peru Rail Andean Explorer, between Cusco and Puno. At the next train crossing, I watched the passengers, both inside the train, and on the back deck of the last car. Most with their puffy down North Face jackets.

I stopped several times in search of oil, without success.

In case you ever get lost, it’s easy to find your way again on the Gringo Trail…just look for the stickers plastered all over the gas station windows. Now including mine at the top, at this Repsol station.

Like many other things outside of the United States, you don’t go to one store for everything; Repsol gas stations don’t carry oil. You have to go to the lubricant store. I also stopped at several motorcycle repair shops, but they only carried 30 weight mineral oil. Eventually I found a lubricant store in Sicuani and was able to buy some synthetic oil, and while I was strapping it onto the bike, a guy three doors down whistled at me, calling me over. We struck a deal, and he changed my oil for me for ten soles, or $2.91 (okay, I mostly changed it, but he took my old oil away. I prefer it this way).

A little south of Sicuani I passed the town of Marangani, which is famous for raising Cuy, that tasty treat known to most of us as Guinea Pig.

I made a short day of it, as I had planned to stop and camp in Tinajani Canyon, just outside of the small village of Tinajani. I stopped in town at a small tienda to buy some supplies for dinner and future meals. I bought a large bag of pancito (bread), two bananas, a can of tuna, a bottle of water and a bottle of coke for $2.33. The road bypasses this town, and it looked and felt like most of the people weren’t used to seeing Gringos in riding gear on fully loaded motorcycles, even if it is just a 250. I drew a bit of a crowd just packing my groceries away. This probably happens every day to all of those BMW riders.

Friendly locals smiling while watching me load the bike with dinner. They seemed surprised when I asked them to pose for a photo with my bike. Or it could be just I’m a crazy Gringo far from home.

Tinajani Canyon is beautiful. The rock formations remind me of Utah, but the ground is all green around them. I stopped at a small house and asked the woman there (dressed in traditional clothing and hat) if I could camp there. She said yes, and pointed across a small bridge to a green spot above the river. Just as I pulled up, it began to rain again. I quickly pitched my tent and crawled inside. The sound of the rain put me to sleep, and I awoke about an hour later to the sound of hooves. As I looked out of the tent, there were cattle and sheep being driven around my tent and up the canyon. The rain had stopped and there was a cold breeze blowing, but it was comfortable in the tent. 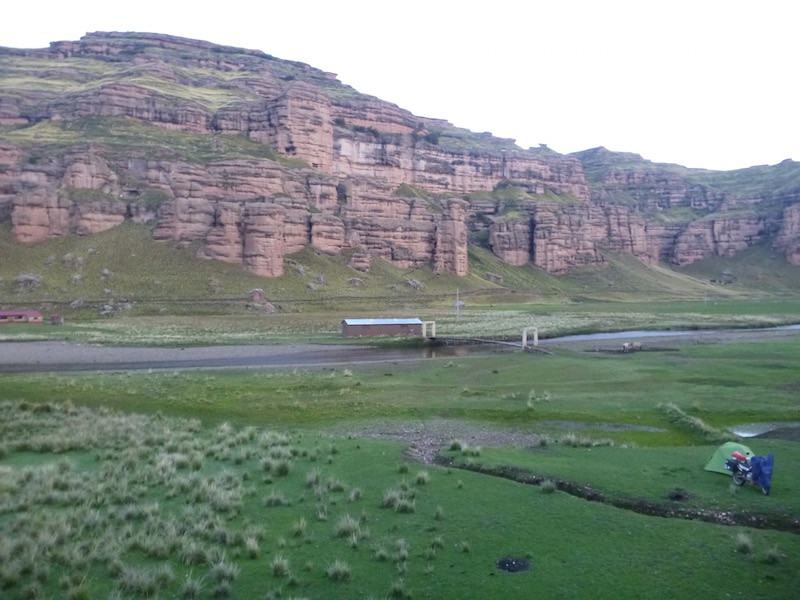 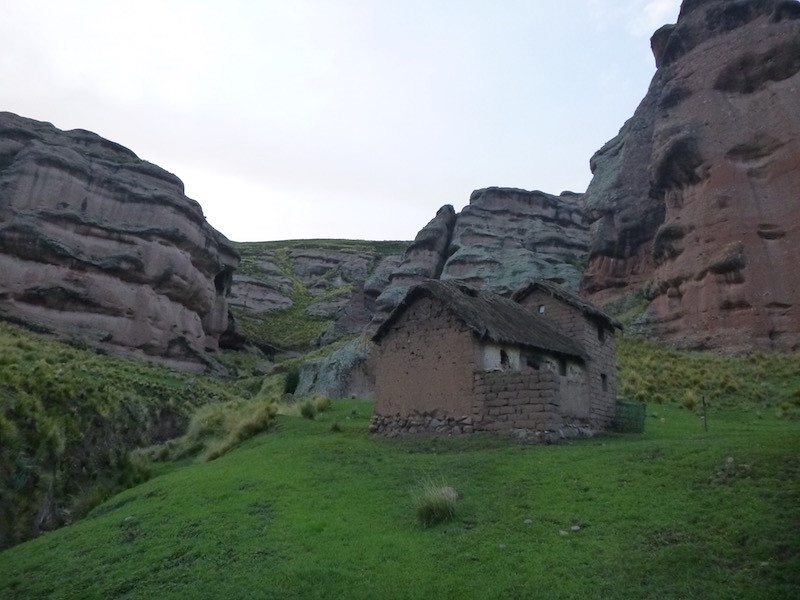 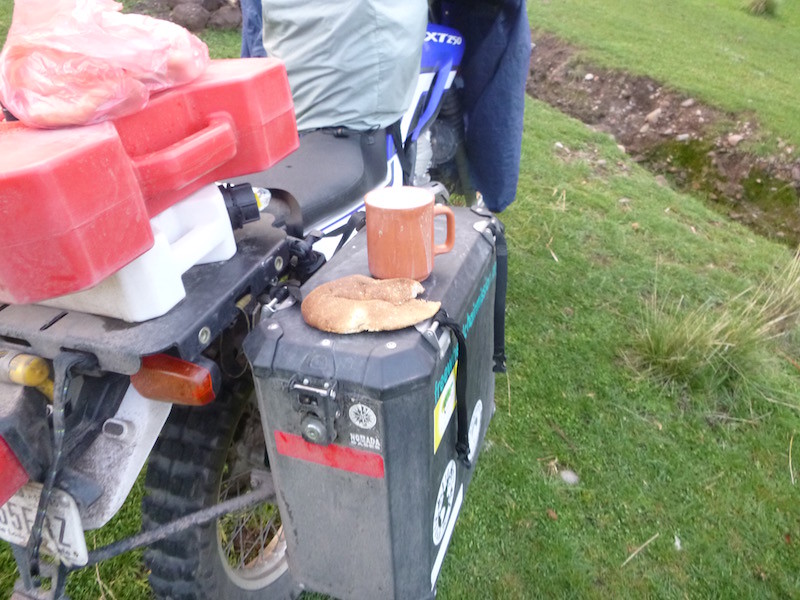 The husband of the woman I met earlier came by and offered me hot cafe con leche and pancito bread. Just genuine people.

Once it got dark, the sounds got interesting. It is incredibly dark and incredibly quiet out here, since there is no electricity and few people. The first sound I noticed was a huge june bug flying around outside my tent. I am not exaggerating when I say at first I thought it was a motorcycle going by on the dirt road. It wasn’t until it hit my tent (and startled me) that I realized what it was. After a while, there were several of these huge bugs around. One of them was under the rain fly of my tent and I watched from inside the tent as he munched on the grass. It sounded like eating crisp lettuce.

Next came two bullfrogs. The first one sounded like “I’m Adam. I’m Adam. I’m adamant” (or it could have been “I’m Adam Ant”, but he seemed a bit young to be a fan of early 80’s post-punk music). The second would answer with “Sam-Sung, Sam-Sung, Sam-Sung”. This went on for over an hour. It was entertaining for the first five minutes or so. Not so much after that. 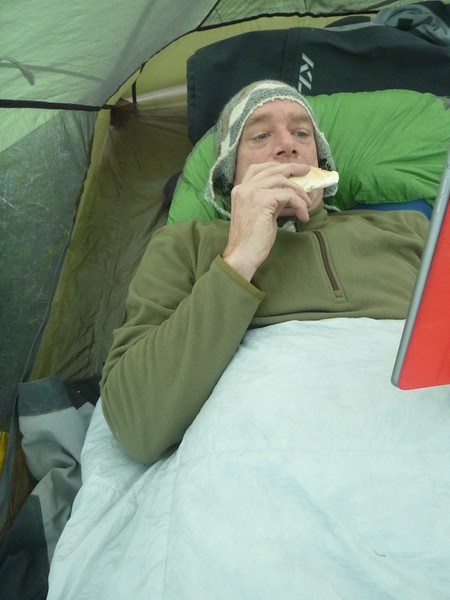 Cozy in my tent, with my new alpaca hat (wow, that thing is warm!), eating pancito and reading on my iPad.

In the morning, I awoke to frost on my tent and bike cover, and ended up having to wait a while for it to melt off and dry before packing up. It gets light here about 5:30am, but the sun didn’t make it over the mountain and into the canyon until after 7am.

Leaving the canyon the next morning. 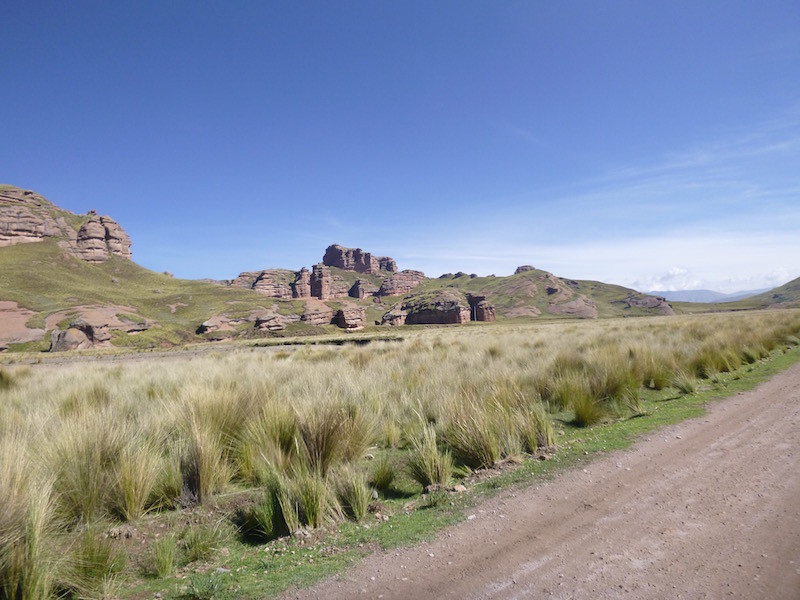 One thought on “Tinajani Canyon”